Abstract: In this present study emulsions were prepared by using black cumin oil. Dry gum method was followed to prepare emulsions formula A & B. Stability tests including organoleptic property evaluation, pH test, accelerated stability studies, water-drop test and peroxide value were determined. In case of organoleptic property evaluation emulsions showed insignificant changes and there were no variation in pH in both preparations up to 3 months. Emulsions were also undergone to different temperature effects and centrifugation at 4000 rpm, but lost the homogenous structure and separated into two phases under the effect of light and centrifugation. The study showed better results for emulsion B comparing with emulsion A. Thus our results showed that emulsion formulation B can be a good semi-solid preparation in Pharmaceutical field and food industry.

An emulsion is defined as a disperse system consisting of two immiscible liquids, one of which is distributed throughout the other in minute globules, the system being stabilized by the presence of a third substance, the emulsifying agent [1]. Emulsifying agents can also be classified into two classes based on the chemical, natural and synthetic agent [2]. The radius of the emulsified droplets in an opaque, usually white emulsion ranges from 0.25 to 10 microns [3].

Common emulsions are inherently unstable and do not tend to form spontaneously. Energy input through shaking, stirring, homogenizing or exposure to power ultrasound is needed to form an emulsion [4]. Emulsions tend to revert to the stable state of the phases comprising the emulsion. There are important exceptions to this rule, micro-emulsions are thermodynamically stable while translucent nano-emulsions are kinetically stable [5]. Therefore the purpose of emulsions preparation is to increase drug solubility, drug stability, drug action, taste and appearance. Moreover, there are some limitations of emulsion preparation such as difficult to prepare as special processing techniques are required and choice of suitable emulsifying agent is a high risk.

Nigella sativa is known as kalojira in Bangladesh. It is also known as nigella or kalonji used as a spice in Indian and Middle Eastern cuisine. The plant is native to Southern Europe; North Africa and Southwest Asia. It is indigenous to the Mediterranean region but now found widely in India (Jammu, Kashmir, Himachal Pradesh, Bihar, Assam and Punjab). The herb is also cultivated in Bengal and North-east India [6]. Black cumin oil is derived from black cumin seed. It is effective in treating diseases, but only limited numbers of dosage forms are available in market containing black cumin oil. In this present study therefore gave emphasize on the formulation and preparation of a stable emulsion containing black cumin oil.

The emulsions were prepared by following continental or dry gum method. The continental method is also referred to as the 4:2:1 method because for every 4 parts by volume of oil, 2 parts of water and 1 part of gum are added in preparing the initial or primary emulsion [7]. If oil contains volatile compounds the ratio will be 2:2:1 [8]. The composition of two developed formulations is presented in table 1.

At first Acacia was weighted by weighing machine (Shimadzu corporation, Japan) and taken into dried cleaned mortar. Then measured amount of oil added to acacia and triturated homogenously with pestle until cracking sound produced. When the mixture became sticky, external phase (distilled water for formula A and distilled water: glycerin in 50:50 ratio for formula B) was added and mixed well to form primary emulsion in a ratio of 2:2:1 (As black seed oil contains volatile compounds). Rest of the ingredients added to the primary emulsion successively and mixed well to form final emulsion. Formations of final emulsion looked homogenous and were stored in glass bottles at ambient condition (room temperature) to evaluate the quality of preparations in different Stoppard test tubes.

2.3. Procedure of the Performed Tests

For evaluation of organoleptic property five volunteers were chosen to perform the study for 3 months. Recorded data were compared with each other by a typical thermometer scale (figure 1) as described in Lachman et al., 1990 and results were calculated by statistical application using the formula of Z test [9]. The normal approximation test is

Where P is the observed proportion and N is the sample size. If Z is greater than 1.96 (significant), the treatment differs at the 5% level (two-sided test). The calculation can be simplified as follows

pH test is the most important parts of chemical stability [10]. It is a numeric scale used to specify the acidity or alkalinity of an aqueous solution. pH Indicators was used to measure pH, by making use of the fact that their color changes with pH. Soap type emulsions usually have a pH of 8 or more and will separate if the pH is reduced below 8. Non-ionic emulsified products may be used in a pH range from 3 to 10, depending on the nature of the emulsifier. Cationic emulsions shows generally range in pH from 3 to 7 [11].

I. Effect of temperature:

The most widely used stress in emulsion testing is temperature. A particularly useful means of evaluating shelf life is cycling between two temperatures and this should be conducted between 4 and 45°C [11]. Care must be taken to protect emulsions against extremes of cold and heat. Freezing and thawing coarsen an emulsion and sometimes break it. However, excessive heat has the same effect [7]. In our study, the emulsions were undergone to different temperature for 5 days. Duration of exposure to sunlight was 4 hours/day and the freezing temperature was 4°C. The effect of both sunlight and freeze were observed and the changes were noted done.

It is commonly accepted that shelf life under normal storage condition can be predicted rapidly by observing the separation of the dispersed phase due to either creaming or coalescence when the emulsion is exposed to centrifugation. Stokes’ law shows that creaming is a function of gravity and an increase in gravity therefore accelerates separation. Becher indicates that centrifugation at 3750 rpm in a 10 cm radius centrifuge for a period of 5 hours is equivalent to the effect of gravity for about 1 year [12]. In our study the preparations were undergone to centrifugation (Laboratory centrifuge, Model 800, China) for 5 hours with 30 minutes interval, at 4000 rpm. At the end of centrifugation the samples were checked to see whether there was any change.

Water-drop test was mainly performed after the phase separation of the emulsion to identify the separated layers. A particularly simple means of determining phase separation due to creaming or coalescence is apparently so trivial that it has evidently not been described in the literature. It involves withdrawing small specimens of the emulsion from the top and the bottom of the preparation after some period of storage and comparing the composition of the two samples by appropriate analysis of water content, oil content or any suitable constituent [3]. In our study water-drop test was performed by adding one drop from different layers of the preparation to a water filled beaker with the aid of a dropper and different layer was detected.

It is a stability testing, variations in peroxide value indicate the unstable condition of the preparation. The test was performed by AOCS method as described in Lubrizol standard test procedure [13].

1. Conducted a blank determination of the reagents each day.

3. By graduated cylinder, added 30 ml of the acetic acid-chloroform solution.

4. Swirled the flask until the sample was completely dissolved (careful warming on a hot plate might be necessary)

6. Stopped the flask and swirled the contents of the flask for exactly one minute.

7. Immediately added by graduated cylinder, 30 ml of either distilled or de-ionized water, stopperd and shaked vigorously to liberate the iodine from the chloroform layer.

11. Titrate until the blue gray color disappeared in the aqueous (upper layer).

General appearance of the emulsions formula A & B is opaque. Noticeable change was found in the organoleptic properties of both preparations, color became slightly brownish and dark. At the same time, the odor was changed but there was no significant change in the parameters up to 3 months (table 3). The Z value of emulsions was less than 1.96 for every parameters and this reflects that there was no significant change of color, odor, feel and taste parameters. 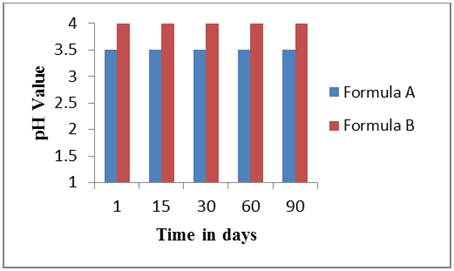 No variation in pH value was noticed in emulsions from day 1 to day 90 (figure 2). For both emulsions the value was constant and it was 3.5 and 4 for formula A and B respectively. By analyzing the pH, it can be determined that both emulsions can be categorized as cationic emulsion.

I. Effect of Temperature

Both preparations of emulsions were undergone to phase separation from day 1 to day 5 during exposure to sunlight and refrigeration in 4°C temperature (table 4).

After centrifugation, both preparations separated into different layers (table 5). The separation was clear, applied centrifugal force clearly separated the homogenous mixture of emulsion within 5 hours.

The aqueous and oil layer was identified by drop test (table 6). Formulations were separated into two layers, one of which is aqueous and another is oil layer.

Table 6. Identification of oil and water layer by drop test.

The results of peroxide value determination of black cumin oil emulsions are very much confusing, and no complete conclusion can be drawn due the fluctuating results after 90 days evaluation (table 7, figure 3).

Table 7. Peroxide value of Black cumin oil, E-cap, Emulsion A and Emulsion B.

Figure 3. Peroxide value versus time curve of Black cumin oil, E-cap, Emulsion A and Emulsion B.

Though, the preparations were separated into two distinct layers on their different stage of test, but the separation was reversible and after re-shaking it retains its homogenous look. It may occur because of improper storage condition that can affect the quality of these preparations. Mechanical error and the reagents used may also be responsible for this.

Comparing with all performed tests on emulsions, it is satisfactory that Emulsion formula B shows much better result than formula A. It shows lower peroxide value than formula A, and the aesthetic value of formula B is also higher than formula A, it may be due to the presence of glycerin on formula B. Glycerin acts as viscosity enhancer and links two layers like a bridge, so tendency of phase separation is much lower. So, further research in this sector is required to find out the causes of phase separation. In that case, formula B can be a good semi-solid dosage form of black cumin oil.

Authors would like to acknowledge Department of Pharmacy, Jahangirnagar University, Bangladesh for providing necessary equipments and ingredients.