Abstract: Background: Prediction of protein solvent accessibility, also called accessible surface area (ASA) prediction, is an important step for tertiary structure prediction directly from one-dimensional sequences. Traditionally, predicting solvent accessibility is regarded as either a two- (exposed or buried) or three-state (exposed, intermediate or buried) classification problem. However, the states of solvent accessibility are not well-defined in real protein structures. Thus, a number of methods have been developed to directly predict the ASA based on information such as amino acid composition. Results: In this study we use physicochemical properties of amino acid such as hydrophobicity for ASA prediction by considering amino acid composition. We propose a systematic method for identifying residue groups with respect to protein solvent accessibility. The hydrophobicity of amino acid are used to generate features. Finally, Adaptive neuro fuzzy inference system (anfis) is adopted to construct a ASA predictor. Experimental results demonstrate that the features produced by the proposed selection process are informative for ASA prediction. Conclusion: Experimental results based on a widely used benchmark reveal that the proposed method performs good among several of existing packages for performing ASA prediction depending on amino acid sequence only .The program and data are available from the authors upon request.

Predicting protein tertiary structures directly from one-dimensional sequences remains a challenging problem (1).The studies of solvent accessibility have shown that the process of protein folding is driven to maximal compactness by solvent aversion of some residues (2). Therefore, solvent accessibility is considered as a crucial factor in protein folding and prediction of protein solvent accessibility, also called accessible surface area (ASA) prediction, is an important step in tertiary structure prediction (3). Traditionally, predicting solvent accessibility is regarded as either a two- (exposed or buried) or three state(exposed, intermediate or buried) classification problem. Various machine learning methods have been adopted, including neural networks (4) (5) (6) (7) (8) (9) (10) (11), Bayesian statistics (12),logistic functions (13), information theory (14) (15) (16) and support vector machines (SVMs) (17) (18) (19). Among these machine learning methods, neural networks were the first technique used in predicting protein solvent accessibility and are still extensively adopted in recent works. In addition, SVMs were also effective for ASA prediction. Several features were used to train these machine learning methods, such as local residue composition (4) (5), probability profiles (20) and position specific scoring matrix (PSSM) (21). Ahmad et al. developed a method, RVP-net, to predict the real values of relative solvent accessibility (RSA) (22). The RVP-net used the local amino acid composition to train a neural net-work and yielded an accuracy of 74.1%. Yuan and Huang (23), also used the local amino acid composition and adopted support vector regression (SVR) (the regression version of SVM) to achieve an accuracy of 74%. Wang et al. (24) proposed a real value ASA predictor with an accuracy of 78 % by combining the amino acid composition with multiple linear regression. Table 1 summarizes the recent developments in predicting ASA. Neural networks and SVRs were extensively adopted and outperformed other machine learning methods. This study proposes a systematic process to predict ASA. ANFIS is used to construct an ASA predictor. The present method is compared with three ASA.

This dataset contains all proteins in Protein Data Bank (PDB) which have at least 30 amino acids long withe no chain breaks.this set consists of 1180 sequences corresponding to 282,303 amino acids.

The This is one of the oldest datasets created for evaluating secondary structure prediction schemes. The dataset contains 126 proteins which did not share sequence identity more than 25% over a length of at least 80 residues.

In this study we use, Adaptive neuro fuzzy inference system network available in MATLAB R2011a Fuzzy toolbox, with one input layer ,one output layer.

We applied a sliding window of size 15 (an odd number of respectively amino acids) as the input to the network to predict the solvent accessibility of the residue in the middle of the window; this will add the influence of the neighbors into the prediction. ach amino acid in the input window encoded with is hydrophobicity of amino acid represented in table (2).

Thus, using the previous input and output matrices , we have created an anfis network shown in Fig (1).

Table 2. The a hydrophobicity of amino acid. 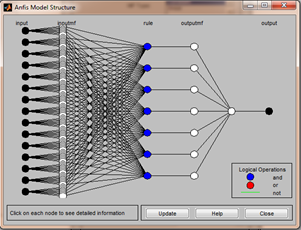 The table(3) demonstrate the anfis specifications.

This section displays the results of system, to be compared, and the comparison depends on the accuracy of each system Q, which is calculated according to the following equation:

The total accuracy for predicting of the solvent accessibility is Q= 70.9%, with an accuracy of Qa= 74.4 for buried residue and Qb= 66.92 for exposed residue.

Table 4. Comparison between our research and other researches.

The authors would like the Damascus university for their support.