Hydraulic structures like barrages, dams, regulators, weirs, sheet pile wall.etc, area specific type of engineeringstructures designed and executed in such a way in order to operate them to control natural water or save industrial sources to guarantee optimumuse of water. These structures are frequently build on soil materials and the foundation thickness must be thick so as to be safe against uplift pressure (AL-Ganaini 1984).The analysis and design of foundation, as compared with other parts of the structure, should be given greatest importance because failure in the foundation would destroy the whole structure.the differential head in water levels between theupstream and downstream acts on the foundation and causes seepage flow (Selim 1947 ). Different methods solution can be used to analysis the seepage problem such as experimental works using physical model as well as numerical models (EL-Fitiany et al 2003). A flow net is in fact a solution of Laplace's equation in two dimensions. The model of seepage tank (sand tank)is very useful in studying the conditions of fluid flow under the hydraulic structure (Roy 2010). The hydraulic modeling method to determine the flow net in this study represented by a physical model was built to study the phenomenon of seepage through soil using different types of soil under the hydraulic structure foundation (multi layers soil). And the factor of safeties will be found for each position.

Various theories and investigations were put forward to predict seepage phenomenon and determination flownet by experimental and numerical methods.Abourohim (1992) investigate the effect of seepage underneath the structures that generated uplift pressure acting on structures with: i) simple floor and ii) floor having an intermediate sheet pile by using a sand model. He concluded that such an effect becomes negligible when the canal width exceeds 2.6 times the length of the floor of the structure. Desai and Christian, (1977): studied the seepage through a two layered foundation of a dam, within each layer the soil was assumed homogenous,they used the finite element method. The computed values from the finite element method were compared with those from graphical solutions. Zheng-yi. and Jonathan, (2006): used the finite elementmethod to analyze seepage through a two-layer soil system. The program SEEP was employed to analyze flow characteristics of an impervious dam with sheet pile on a layered soil. The results were reduced to simple charts, The chart curves allow a designer to obtain solutions to the seepage problem. and can be extended to a soil system comprising more than two layers.Arslan and Mohammad, (2011)measured the pizometric head distribution under hydraulic structures and studied the effect of upstream, intermediate and downstream sheet piles inclination. using experimental method. The study consisted 12 separated case of these inclined sheet piles with changing the direction of this inclination. they foundthe optimum case of the uplift pressure reduction.

3. Objectives of the Study

The main objectives of this work can be summarized by the following points:

1.   Equipotential lines and flow lines were located by conducting experiments on a known sample in a seepage tank and for multi-layers soil used in research work.

The experimental soil sample was taken from Hilla city region. The soil profile of any region contains many soil horizons, the difference between these horizons is marginal (no-homogenous soil). In the model tests, the profile is assumed to consist of one horizon (homogenous soil) (Aziz 2008). The tests used here to analyze the soil specimen in order to determine soil distribution and other engineering properties were conducted as per the Unified Soil Classification System, also the hydraulic conductivity values of the soil samples was measured inlaboratory method.Table 1 shows a summary of the physical properties that measured of the soils which consist of three layers arranged in descending order.used in the present study.figure (1) shown the arrangedfor type of soil used in present study. 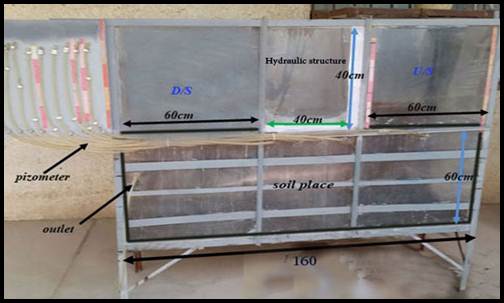 Laboratory experiments have been conducted in a seepage tank that has been designed with hypnotically dimensions of 1.6 m long, 0.5m width and 1.1m height The bottom and sidewalls of this tank were made of Acrylic of (10mm) thickness. Figure (1)shows the seepage tank used in present study (front view). The bottom of the tank was filled with this material of soil to a depth of 60 cm. Acrylic walls were used to build the body of the superstructure which consists of two parts. The first part simulated as foundation of a structure (40 cm long × 50 cm wide).This base is connected with the upstream and downstream cutoffs by gluing rubber strips. 10 piezometers were placed at the right side of the tank at different location. All piezometers are fixing to the board.

1.   Taking the datum to be at the bottom of the tank, Install the soil in the form of three layers each layer thickness of 0.2m and it is monitoring the process of using. the metal cylinder

2.   Feeding the water to the seepage tank through the inlet hose until the water level in the upstream region reached the overflow hose level previously adjusted to meet the desired upstream water level.

3.   After reachingsteady-state flow dye is injected from dye bottles which placed in the specific points , after a period of time flow lines were drawn Flux, which represents how the flow of water within the soil particles

4.   After drawing flow lines, the vertical piezometers were installed transparent glass vertically into the soil to measure the total head in the points to draw the equipotential line.

5.   Measure the discharge of drained water collected from the downstream funnel using the volumetric method by using jar.

6.   Record the reading of the piezometric head of all installed piezometers under the base and downstream side.

7.   Put the cutoffat upstream side with the angle of inclination for upstream(Ɵ=45, Ɵ=120, Ɵ=90) and repeat the step (7-8-9)to find the best angleto gave less value of uplift pressure and quantity of seepage.

9.   figure (2) shown the type of testing that made on multi -layer soil

Herein, the discussions of the results for multi layers soils according the following parameters:

7.1. Effect of Inclined Cutoff and its Position on the Uplift Head

As shown in figure (3). Whenthe Cutoff in upstream side of hydraulic structure was inclination with different angles, its noticed that the uplift pressure underneath the hydraulic structure decreases as(Ɵ) decreases towardU/S side for Ɵ(45° , 90°,120°) where the maximumredaction in uplift pressure according to the general case Ɵ=0(without any cutoff)was(-30% , -36% ,-23%) respectively ,so that the best angle is ( 45°). 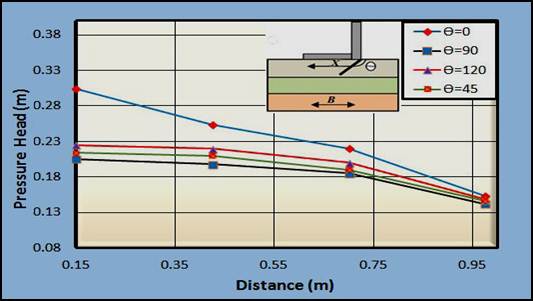 From figure (4). When the Cutoff in downstream side of hydraulic structure is used, the uplift pressure obtained decreases as (Ɵ) decreases towardU/S side for Ɵ (90°and 120°) and the maximum redaction in uplift pressure according to the general case Ɵ=0 was (6%and5.4%). It is noticed that the redaction of the uplift pressure is small to the replacing ofthe cut-off, therefore, it is not recommended under any angle of inclination.

As cutoff positioned in U/S and D/S part of dam structure as shown figure(5), the uplift reduced strongly with maximum difference in value of uplift pressure was 43%. 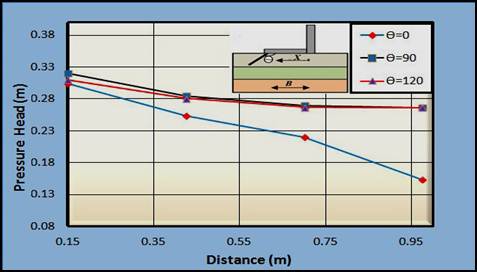 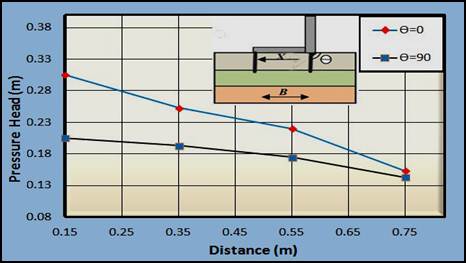 7.2. Effect of Inclined Cutoff and its Position on the Exit Gradient

The exit gradient was studied at the end of the hydraulic structure for the cases that will be discussed herein and the results are represented graphically. The factor of safety for each angle of inclination must be calculated where is equal to the division of exit gradient on critical gradient (Icr) which is dependent on the specific gravity (Gs) and void ratio (e) of the soil particles [ Icr=(Gs-1)/(1+e)]. In this study andfor this type ofsoil(Gs =2.75 ,e =0.77, Icr =0.988).

In figure(6) whenthe cutoff put in upstream side of hydraulic structure it is found that the redaction in values of exit gradient were so small and as follows for Ɵ(45°,90°,120°) where the maximumredaction inaccording to the general case Ɵ=0(without any cutoff) (-9% , -9.3% ,-2.1%) respectively.

The result shows that the upstream cut-off inclination angle has no noticed effect on exit gradient. From the result the factor of safety against piping for this case were shown in table (2).

Table 2. The factor of safety against piping when cutoff atU/S.

In figure(7) whenthe cutoff is put it in downstream side for Ɵ (90°and 120°) the maximum redaction in exist gradientaccording to the general caseƟ=0 was (13.87% , 9% ), respectively . So that the factor ofsafetyagainst piping phenomenonof this case can becalculated as shown in table (3).These results show thatusing cutoff in D/S sideinclination toward D/S for (Ɵ=120) increasing thefactor of safety against piping.

Table 3. The factor of safety against piping when cutoff atD/S.

That exit gradientwhen the cutoff in the U/S andD/S part of dam structure decreases compare with general case as shown in figure (8) were maximum differencein value of exist gradient was 7%. 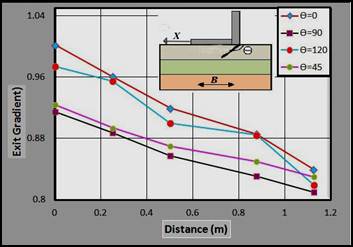 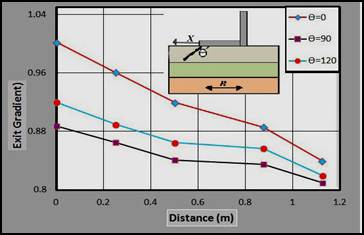 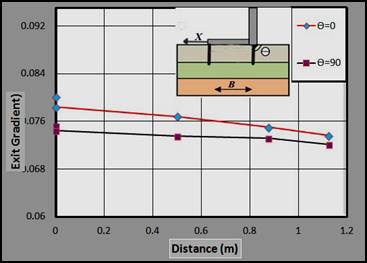 Figure (8). The Exit gradienta range of (Ɵ) values for cutoff inU/S and D/S.

7.3. Effect of Cutoff Position and Inclination on the Seepage Quantity

When theCutoff is in upstream side of hydraulic structure,as shown in figure(9), it's found that the seepage decreases while (Ɵ) decrease towardU/S , and the least quantity of seepage occurred when (Ɵ) value around (90 ). 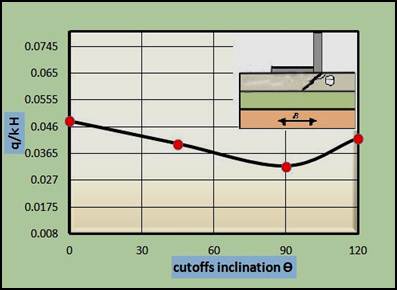 In figure(10) Whenthe Cutoff is in upstream side of hydraulic structure the seepage decreases while (Ɵ) increases, and the least quantity of seepage occurred when (Ɵ) value around (120 ), then the seepage increases rapidly for (Ɵ ≤ 90). 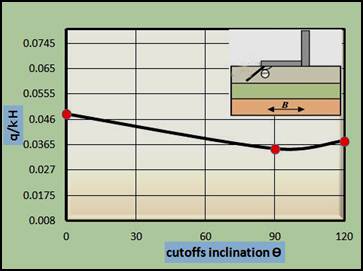 The following main conclusions can be drawn from the results presented in this research:

1.   The shapes of the flow net depend upon many factors such as diameter of the particle of the soil and location of cutoff.

2.   The shape of the flow net obtained by experimental work (seepage tank model) and the result by slide model shows a good agreement.

3.   The minimum value of uplift pressure is obtained when the cutoff used in upstream part of hydraulic structure is at the right angle of inclination(Ɵ= 90°).

4.   The exit gradient in downstreamside and amount of seepage decreased to minimum when putting the cutoff at right angle of inclination for both up or downstream part cutoff.

5.   Placing an inclined cut-off at the hydraulic structure heel and toe is not recommended under any angle of inclination.

6.   Using double cutoff at the up and downstream part of dam at the right angle is useful to reduce the uplift pressure, exist gradient, and quantity of seepage at the same time.