2. The Study on Experimental Fracture Toughness of RCC Specimens

The experiment use common water from life for test water, P.O 32.5 cement, II grade fly ash, and nature medium sand which requires to particle greater size than 5 mm. Coarse aggregate use the maximum particle size of 20mm. Admixture uses high performance water reducer and the mix ratio of the concrete is shown in the Table 1.

2.1.2. Parameters of Specimen and Test Device

The wedge splitting specimen is used. The RCC specimen’s parameters and quantities are shown in table 2. The wedge splitting test is carried out with the 200 kN electro-hydraulic servo testing machine and the constant displacement loading method is used during the test.

Table 2. The parameters of the wedge splitting specimen.

We use the method in [7] to analysis. The coordinate system shown in figure 1 (a) is established with the center of the specimen as origin. When left and right symmetrical on both sides of the force system were moved to the B1, B 2 points, the stress system (solid line) of figure1(a) is equivalent as the force system of in figure1(b) of (solid line shows ), where M 4 =1/2Ph D-1/2Pv e according to the force balance shows F=1/2mg+1/2Pv. Using the superposition principle of force, figure1 (b) can be decomposed into figure1 (c) and figure1 (d) cases. According to Saint Venant principle, figure1 (c) can be further equivalent to figure1 (e).The stress situation of the wedge splitting geometry test is transformed for solutions of problems of uniform tensile force P x and pure bending with unilateral openings.

Unilateral opening specimens are subject to axial pull action as shown in figure1 (e) and the stress intensity factor can be calculated by the use of the following formula[8]:

Unilateral opening specimens are subject to pure bending moment action as shown in Figure 3 (e) and the stress intensity factor can be calculated by the use of the following formula[8]:

Superposition type (1) and (2), when wedge splitting pull geometry is loading at any moment, the expressions of stress intensity factor of crack tip can be expressed as follows:

We can get each test value of nominal fracture toughness , and take the average value are shown in table 3 by using the maximum load of each specimen and original parameter to substitute type (3). 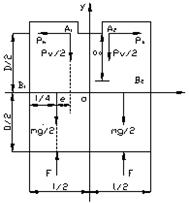 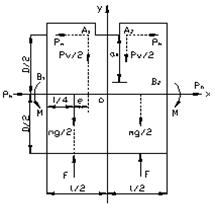 Fig. 1. Diagram of force on the specimen.

3. Selection of the Formula for the Fracture Toughness of RCC

RCC as a kind of concrete is different from ordinary concrete in the construction process. But studies show that RCC’s size effect rules of fracture toughness are same with ordinary concrete’s. In addition, the RCC is an anisotropic material, the direction of the roller compacted layer is perpendicular to the direction of the crack. The specimens’ force of wedge splitting tensile test is completely symmetrical completely on both sides of the cracks. RCC can be regarded as homogeneous materials along the height direction of each layer, and has same properties with ordinary concrete in this direction. So the RCC maybe have the same nature as the ordinary concrete in the isotropic condition, at the same time due to the different construction process they also have a certain difference. Now the theoretical research on the concrete’s formula of size effect has a lot of, such as Xu Shilang [7], Bazant[9], Carpinteri [10], Hu [11]and Wang[12].

in which: KIc is no size effect fracture toughness;

The size effect formula of fracture toughness of the three point bending beam is obtained.

in which: W is specimen height; A1andB1 are the regression parameters are obtained by the test values for a given parameter,

3.1.2. The Modified Formula Based on Hu’s Nominal Size Effect Formula [12]

in which: each symbols has the same meaning of various symbols in front.

Compared with formula (5), formula(6) is also considered the effect of crack-depth ratio and crack length. At the same time, it allows the size of the specimens with different crack-depth ratio, has less constraint conditions, less constraint conditions, and has a wide applicable scope. The nominal fracture toughness of the small specimens can be measured easily by the test, and the parameters of the model are not required.

When the formula (5) is simplified further, we can obtain the size effect formula of fracture toughness of concrete containing two coefficients:

in which: A1andB1 are the coefficient, which are related with α1 、B(α1)、KIc and

It can be determined using the test data of two points.

, it can be determined by the test data of two points;

is the height of a known specimen;

is the height of an unknown specimen;

Further, we can obtain the fracture toughness formula which contain the crack-depth ratio and the height.

When the height of the known and the unknown specimen is same，we can obtain Formula (11) only considering the crack-depth ratio.

We would removal the large deviation value of the test results obtained earlier and use remaining into formula (11). We obtain the theoretical value of the fracture toughness of RCC. As shown in Table 4.

We can see from table 4 that the theoretical values are in good agreement with the experimental values. It can explain that previous theoretical formula has a certain applicability, but its further law also need to be further explored.

We get the following conclusion:

(2) Under the influence of the crack depth factor, the fracture toughness of RCC is changed, but its change is not monotonous.

(3) We can obtain the fracture toughness formula of RCC , which is usually used to consider the crack depth ratio, by the Hu’s size effect formula:

(4) We can get the theoretical values are in good agreement with the experimental values. It can explain that previous theoretical formula has a certain applicability, but its further law also need to be further explored.

This work was financially supported by Project of Education Department of Liaoning Province (L2013535).