Abstract: Traditionally, the use of limestone fines (LF) in concrete is to replace either part of the cement or part of the fine aggregate, notwithstanding this, the authors are advocating that the LF should be better used as cement paste replacement, which is expected to improve the durability and sustainability of concrete at the same time. To verify this new strategy of using LF, 9 nos. concrete mixes of the same powder paste volume ratio and variable LF contents and W/C ratios were produced for permeability and strength measurement. The results proved that the strategy of using LF to partially replace cement paste could effectively decrease the permeability and increase the strength at the same W/C ratio. Furthermore, even when the W/C ratio is allowed to slightly increase while keeping the concrete at the same strength, the permeability can also be significantly reduced for better durability by using LF as cement paste replacement.

The cement paste volume together with the LF volume is called the powder paste volume. The powder paste volume must be sufficient to fill up the voids between the aggregate particles. With LF added, the cement paste volume can be effectively reduced by an amount equal to the LF volume. This is equivalent to adding LF to replace an equal volume of cement paste. Due to the much lower energy and carbon footprints of LF as compared to cement which requires heating up to high temperature to form clinker, the use of LF in concrete production can result in more environmentally friendly and sustainable concrete.

An ordinary Portland cement (OPC) of strength class 52.5N complying with British Standard BS 12: 1996 [10] (equivalent to ASTM Type I) and a finely ground LF were used in all the concrete mixes. The 28-day mortar cube strength of the OPC was measured as 59.0 MPa, whereas the specific gravities of the OPC and LF were measured as 3.11 and 2.64, respectively. By using a laser particle size analyzer, the volumetric mean particle sizes of the OPC and LF were determined as 11.4 mm and 14.5 mm, respectively.

In this study, a total of 9 nos. high-flowability concrete mixes were produced for testing, as listed in Table 1. The W/C ratio was varied amongst 0.40, 0.50 and 0.60 while the LF content by volume of concrete was varied amongst 0%, 4% and 8%. In all the concrete mixes, the powder paste volume was fixed at 34%. When LF was added, the cement paste volume was reduced but the W/C ratio was kept constant. Concrete with flowable property was investigated in the experimental program for the reason that LF is in general conducive to the production of high-workability and/or pumpable concrete mixes. It is noteworthy that the production of a flowable concrete using just a cement paste volume of 26% is not easy. Nevertheless, its low cement content renders the concrete to have small carbon footprint, which is attractive from sustainability viewpoint.

With the powder paste volume fixed, the aggregate volume was also fixed. Moreover, the fine to total aggregate ratio was fixed at 0.4. In each concrete mix, the fine aggregate content, 10 mm aggregate content and 20 mm aggregate content were calculated as 672, 504 and 504 kg/m3, respectively. As in usual practice for the production of flowable concrete, a polycarboxylate-based superplasticizer (SP) in aqueous solution form was added to each concrete mix. The SP was added to the concrete mix in small increments until a slump of at least 200 mm and a flow of at least 500 mm were achieved. Notwithstanding the achievement of good workability, no problem of segregation of concrete was observed.

Testing of permeable porosity was also conducted. For each concrete mix, three 100 mm cube specimens cast from the same batch of concrete were tested in accordance with the American Standard ASTM C642-06 [14]. Basically, after water curing until the age of 28 days, each specimen was oven dried to measure its oven-dry mass, then immersed in water and boiled to measure its saturated mass, and finally immersed in water to measure its apparent mass in water. The permeable porosity so determined is the volume of pores that can be filled by water, expressed as a percentage or fraction of the volume of concrete. The permeable porosity result is taken as the average of the three specimens cast from the same batch of concrete and tested at the same time.

The cube compressive strengths were measured by casting three 150 mm cubes from the concrete, removing the moulds one day after casting, applying water curing at a temperature of 27 ± 2°C, and testing the cubes at the age of 28 days, in accordance with BS EN 12390-3: 2009 [15]. The cube strength result is taken as the average cube compressive strengths of the three cubes cast from the same batch of concrete and tested at the same time. 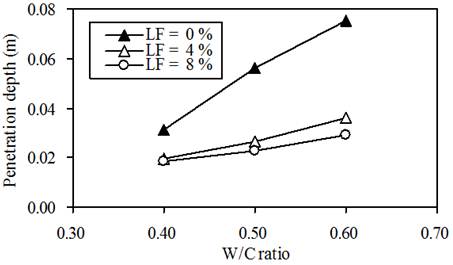 In the following, the concurrently achieved permeability and strength performance is examined. It is found that the addition of LF as cement paste replacement without changing the W/C ratio not only decreases the penetration depth, but also increases the strength of the concrete, as shown in last column in Table 2. If a higher strength is not really needed, the opportunity may be taken to adjust the W/C ratio upwards to improve the workability and further reduce the cement content. For assessing the effectiveness of adding LF in reducing the permeability on an equal strength basis, the penetration depth is plotted against the average 28-day cube compressive strength for different LF volumes in Fig. 2. It is seen that even with the W/C ratio adjusted upwards to keep the strength of concrete at the same level, the addition of LF to replace an equal volume of cement paste would still effectively reduce the permeability of the concrete. This illustrates the beneficial effects of LF with respect to both permeability and strength enhancement. 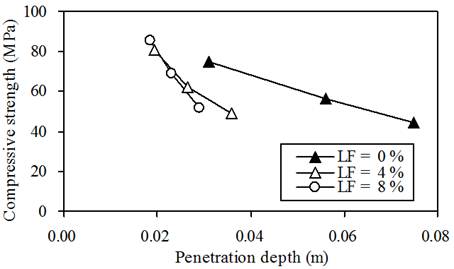 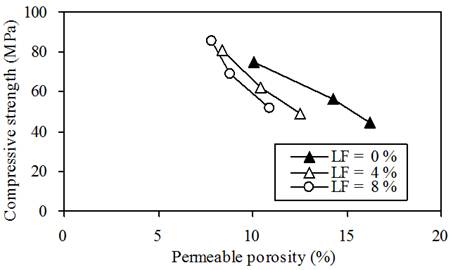 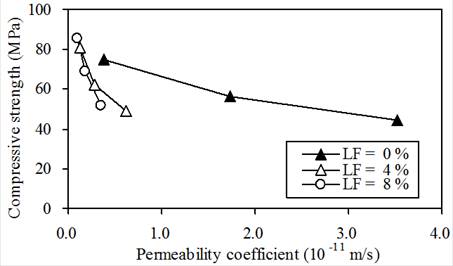 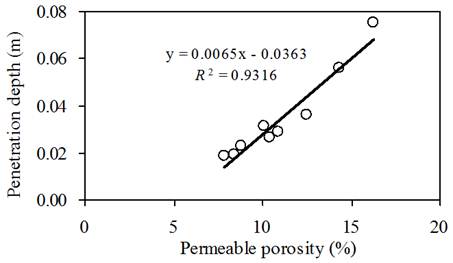 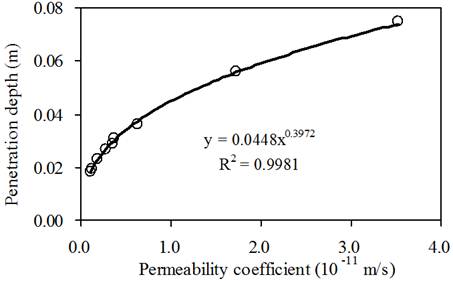 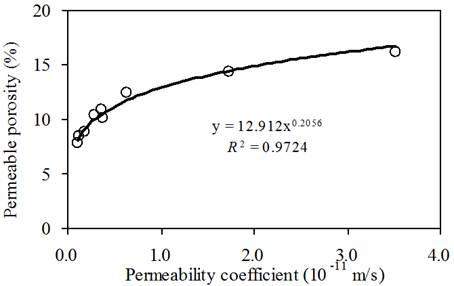 As discussed in the Introduction part, the conventional use of LF is basically to replace either part of the cement or part of the fine aggregate. For the former strategy, although the cement clinker consumption and the hydration heat of concrete can indeed be significantly reduced [16], the addition of LF as cement replacement up to 20% may increase the gas permeability and permeability, which would impaired the durability [17]. Also, with the cement replaced by LF, the water/ (cement + LF) ratio actually need to be lowered to compensate the loss in strength [18-19]. For the latter strategy, although the addition of LF as aggregate replacement may decrease the permeability [7], this strategy would not help to reduce the cement clinker consumption and carbon footprint of the concrete.

In contrast to the above traditional strategies, using LF to replace part of cement paste as reported in this study and advocated by the authors can effectively benefit the water impermeability and durability as well as sustainability at the same time. As the permeability coefficient is strongly correlated to the permeable porosity, the effect of addition of LF on durability is likely through the effects on permeable porosity. To enable wider use of LF in the production of various high-performance concrete, further systematic research on other properties and performance attributes of fresh and hardened concrete mixes incorporating LF is recommended.

A total of 9 nos. concrete mixes at the same powder paste ratio and various limestone fines (LF) contents and W/C ratios have been produced for permeability and strength measurement to verify the effectiveness of adding LF as cement paste replacement on durability improvement. The experimental results have shown that, at a constant W/C ratio, the addition of LF as cement paste replacement would significantly increase the compressive strength and substantially reduce the permeability. Even with the W/C ratio adjusted upwards to keep the strength constant, such usage of LF could still effectively reduce the permeability for durability improvement.

The work described in this paper was supported by the grant PhD Start-up Fund of Natural Science Foundation of Guangdong Province, China (Project No. 2014A030310273).