Abstract: The relationship between COD component and the Coagulation-Sedimentation or the activated carbon adsorption, which were performed at the existing effluent water treatment facility, was investigated effectively to treat COD of the wastewater at the sea reclamation waste disposal site. COD could decrease by only bubbling because COD except for organic matters was contained in waste and wastewater. It is effective to measure the ion property of organic-COD in some waste and select an adequate coagulant. However, it was not necessary that the ion property was related to COD removal ratio. In the activated carbon adsorption, the batch method was very effective but it is necessary to examine the solid-liquid separation after the treatment. Besides, the classification of disposal site for COD treatment and the introduction of the additional charge system calculated on the effluent treatment cost were considered.

Various wastes as sludge or cinder are carried and are reclaimed at a reclamation waste disposal site in proportion to the variety and the complication of industry. Then, it is considered that hardly degradable organic matters, metals and chemical substances exist in leachate. In fact, COD concentration of wastewater at Hibikinada reclamation waste disposal site in Kitakyushu City becomes over 100 mg L-1 at the end of reclamation and it is difficult to decrease at below 20 mg L-1 (aiming value) by the existing effluent treatment (contact oxidation – the Coagulation-Sedimentation with FeCl3 – sand filtration – particulate activated carbon adsorption). As this countermeasure, the pile construction [1], the Coagulation-Sedimentation with powder activated carbon, the penetration of wastewater into the reclaimed wastes [2,3] and the purification by a little stream [4] were examined. But, they were not practical. The reason is considered that the COD components in wastes can be hardly treated with normal coagulant or activated carbon.

Then, we examined COD and total organic carbon (TOC) in 9 kinds of wastes which were carried and reclaimed at the disposal site and contained high concentration of COD. The relationships between the COD components in 6 kinds of wastes and the Coagulation-Sedimentation or the activated carbon adsorption were examined. Further, we also examined the selection and the design of appropriate coagulant or activated carbon and the prospective system for the acceptance of waste.

Table 1. Properties of each activated carbon.

2.3.1. Wastewater at the Disposal Site

To investigate the wastewater at the disposal site, 2 drilling hole waters were sampled in December 2011.

The elution tests for Sludge C (intermediate waste treatment)), Cinder A (incineration ash), Cinder B (chelating), Slag A, Slag B (casting sand) and Slag C (casting sand) were also done and COD and TOC were measured. The elution test was equally performed with "the Verification Methods for Metals et. al. Contained in Industrial Waste" [6]. The ratio of waste (dry matter) and purified water or sea water was 3 w v-1 % and the mixture was shaken for 6-h.

As the test solution for the component examination of COD, total nitrogen (T-N) and total phosphorous (T-P), the Coagulation-Sedimentation and the activated carbon adsorption, 0.5 kg of waste was mixed with 17 L of purified water, the mixture was stand for a day and the supernatant was filtrated with a 1 µm glass fiber filter paper (GFP).

2.7.1. Coagulation-Sedimentation with Several Kinds of Coagulant

Each 500 mL of the test solution prepared in 5 was placed in 6 of 1 L beaker and each 0-100 mg L-1 of coagulant was added. The prepared solutions were rapidly mixed for 1-min at 150 rpm and then were slowly stirred for 10-min at 50 rpm with a jar tester. After 30-min of quiescent settling, the supernatant was filtrated with a 1 µm GFP and the filtrate was analyzed.

For Sludge A, the removal ratio was examined with 50 mg L-1 of FeCl3 at 0-350 rpm of rapid mixture. The Coagulation-Sedimentation was performed at the best pH.

The glass chromatocolumn (the inside diameter: 1 cm; length: 30 cm) was packed with 3 g of activated carbon and was washed with 400 mL of purified water. One hundred milliliter of test solution (TOC: 10 mg L-1) was path through the column and the adsorption ratio of TOC was calculated.

For the adsorption of metal ions, each 100 mL of Ni+ and Fe3+ solution (10 mg L-1) was prepared. The solution was used for the column test.

Each 500 mL of Ni+ and Fe3+ solution (10 mg L-1) was placed in 6 of 1 L beaker and each 3 g of activated carbon was added. The prepared solutions were rapidly mixed for 1-min at 150 rpm and then were slowly stirred for 10-min at 50 rpm. After 30-min of quiescent settling, the supernatant was filtrated with a 1 µm GFP and the filtrate was analyzed.

COD was measured by JIS K 0102 [5]. COD value contains the inorganic reducing matters as H2S, metals, etc. These matters were easy to be oxidized with KMnO4. Then, we defined the COD without 30-min of heating as the inorganic-COD. 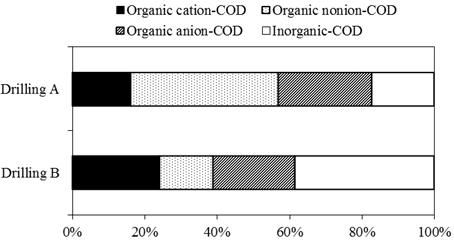 Fig. 1. Component ratio of COD in the drilling hole water.

Fig. 2. Component ratios of COD and TOC in the drilling hole water.

Table 2. Results of the elution test for the wastes containing large amount of organic matters.

Table 3. Results of the elution test for the wastes. 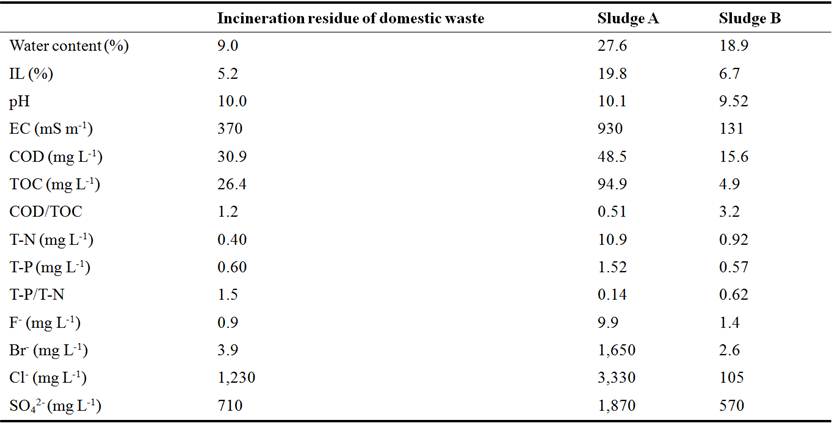 Fig. 3. Component ratio of COD in the carried waste. 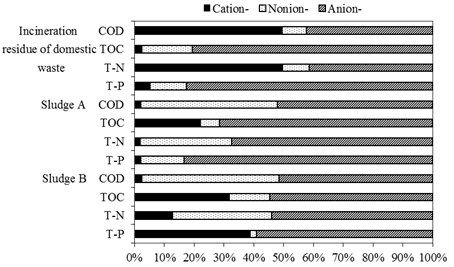 Fig. 4. Component ratios of COD, TOC, T-N and T-P in the carried waste. 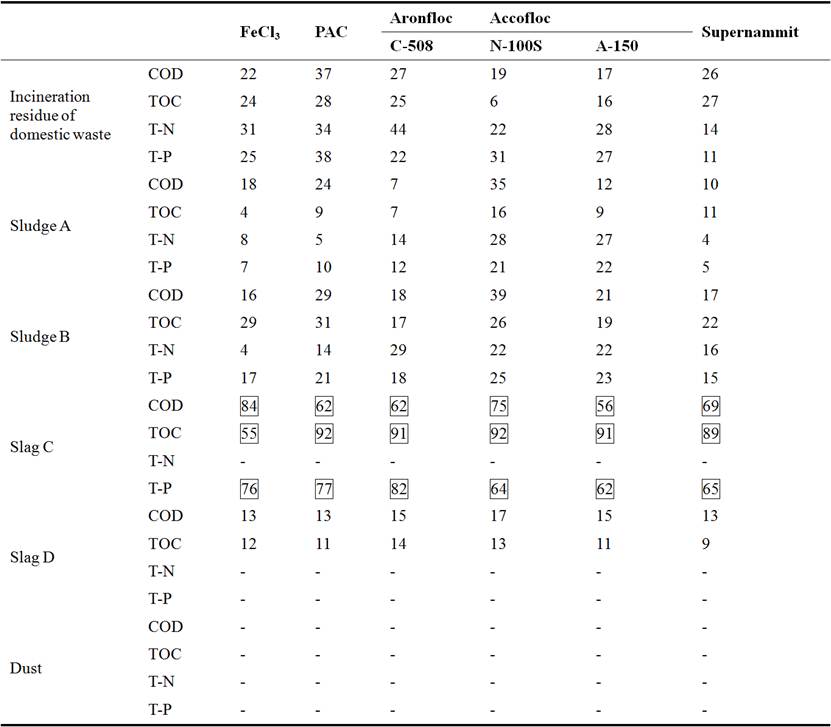 3.2. Change of COD by Bubbling

T-N in Slag C and T-N and T-P in Slag D could not be removed or increased by adding the coagulant. As Dust contained much minute carbon particles ( 1 µm >), the effect of Coagulation-Sedimentation could not observed.

The coagulation effect is also affected by stirring speed. The removal ratios of COD, TOC, T-N and T-P were examined with 50 mg L-1 of FeCl3 at 0-350 rpm of rapid stirring speed for Sludge A. But, the ratios were almost same as at 150 rpm.

3.3.3. Influence of the Coexistence with Anion

Figure 5 showed the adsorption ratios of standard molecular weight reagents as TOC with several kinds of activated carbon. Above 90% of adsorption ratio was obtained on the whole molecular weight in case of Yashicoal S.SC which particle size was the smallest (Table 1). In this column test, particle size largely affected than specific surface area, average fine pore size and fine pore volume. In case of other activated carbon, lower molecular weight reagents hardly adsorbed because they were more hydrophilic. The higher molecular weight is and the higher adsorptivity is because it becomes less hydrophilic. Further, the higher molecular weight is and the lower adsorptivity is because the adsorbate cannot go into the fine pore. The peak was observed in the range of 102-103. In case of Procoal CM and Procoal GN, the peak was also observed in the range of 105-106. 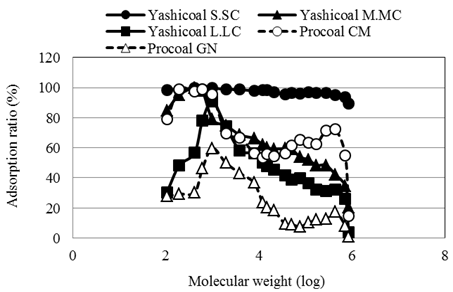 The adsorption tests of metal ions were performed with Yashicoal S.SC, Yashicoal M.MC and Procoal GN. In case of column adsorption test, the ratios of Ni+ and Fe3+ were 100, 18.4 and 0% and 52.3, 90.2 and 23.2%, respectively (Fig. 6). On the other hand, all activated carbons showed 100% of ratio for Fe3+ in case of jar test. The contact with activated carbon also effects on the ratio in case of metal ions (chemical adsorption). 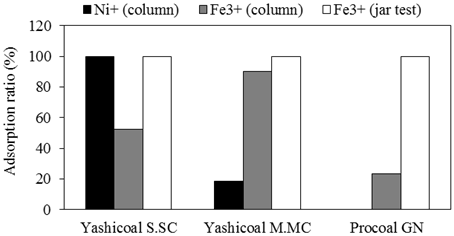 3.4.3. Adsorption Ratio of TOC in Wastes 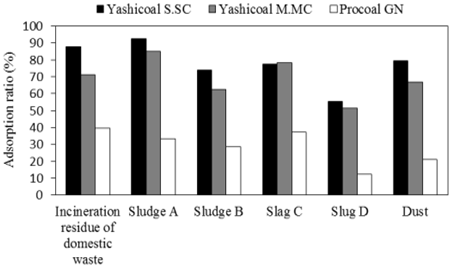 In order to treat COD in the wastewater at the sea reclamation waste disposal site effectively, the relationship between COD component and the Coagulation-Sedimentation or the activated carbon adsorption, which were performed at the existing effluent water treatment facility, was investigated.

(1) As the COD except for organic-COD was contained in waste and wastewater, COD value could be reduced by bubbling.

(2) In some waste, COD can be treated effectively by examining the ionic property of organic-COD and using a proper coagulant.

(3) Though the activated carbon adsorption by the batch method was very effective, it is necessary to use the effective solid-liquid separation.

(4) The classification of disposal site for COD treatment like recycling should be considered.

(5) Though the membrane treatment was effective, large amount of concentrated wastewater must be treated [10].

(6) The countermeasures against Cl- and hazardous substances [11-15] are necessary to discharge into the sewerage.

(7) The introduction of the additional charge system calculated on the effluent treatment cost was considered.

We are grateful to Facilities Management Division, Environment Bureau, Kitakyushu City and Hibikinada Development Co. LTD. for their corporations.