Abstract: This paper presents the strength analysis of a fixed platform topside piping system under dynamic pigging/slugging load. Flow assurance analysis by using OLGA provided the flow history in each pipe. Then the dynamic loads at each pipe elbow were added by time sequence onto ANSYS model. The analysis has shown overstressed region under new pigging/slugging loads and proposed modification plan to reduce the stress.

Pigging operations are required from the fixed platform topside piping operations. The pigging generated slugs boarding the platform may cause piping vibrations when they flow through the bends.

There have been various studies on pipe vibration during operation including pigging/slugging process. Direct measurement of the vibration is costly and restricted (Maekawa, 2014). CFD analysis is also very difficult (Xiao, 2015). Numerical analysis (Persson, 2015) is reliable and easier to achieve than analytical solution (Santos, 2015). Therefore FEA is a suitable tool for pipe vibration analysis during pigging/slugging process.

Structural strength is important for engineering system. There has been intensive research for aluminum (Zhang, 2009), polymer (Wang, 2015) and composite (Liu, 2014).

The mechanical forces on the piping were analyzed consistent with BP document GP 41-20 "Design for Multiphase Flow", with forces applied from a dynamic simulation of the pigging slugging from Olga Simulations at 1-second data intervals for the critical slugging period.

Based on the analysis, piping modifications consisting of the addition of two braces to the Mahogany B piping have been recommended.

As the detailed fluid hold-up varied during the simulation, and coupling between fluid and the piping could not be assessed with OLGA and ANSYS Mechanical due to model limitations, the overall fluid density was changed from 10% to 90% in the ANSYS Mechanical finite element model analysis and the change in the response was analyzed.

The natural response of the system showed the higher fluid density reduced the system piping stress. As the final design is predicted to be safe with minimal fluid mass in the pipe, the conclusion is the piping will be adequate to overcome the excessive stresses for pigging runs regardless of liquid hold up at a recommended flow rate of 2 m/s (150 MM scfd pigging gas rate), providing the recommended modifications are made.

Prepare a schematic of the piping configuration and incorporate the data into an OLGA model of the topsides piping system potentially associated with routine pigging. The piping was converted to equivalent hydraulic lengths to account for frictional loss and predict flow rates through the flow split around the separator using equivalent length values from API 14E, "Recommended Practice for Design of Offshore Piping Systems" 1991 Ed.

Determine the pressure, liquid velocity and liquid/gas density profiles for the platform topsides pipework during the pigging operation.

Identify maximum liquid velocity in the topsides piping during the pigging operation.

The key objective initially identified was to determine the maximum velocity / force that the topsides piping would have to withstand during the pigging operation.

Subsequently, after feedback from the piping engineers, dynamic profiles were supplied to allow dynamic analysis of the piping response by rerunning the simulation of the 150 MMscfd case for the 10 minute period with maximum fluid velocities in 1 second intervals.

A schematic of the OLGA model is shown in Figure 1. 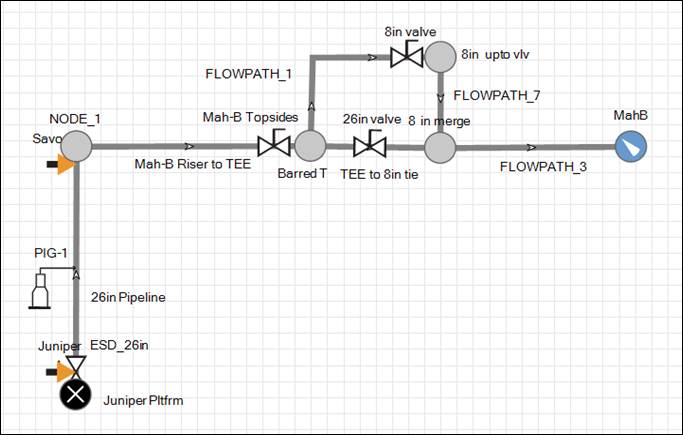 The method in the GP was to determine maximum forces at bends, elbows, etc, using the equation (1).

IF = Ratio of initial and final impulse forces to steady force, given the value of 2

A = cross sectional area of pipe

The liquid slug was assumed to be water, and the gas was natural gas based on operational flow assurance simulations 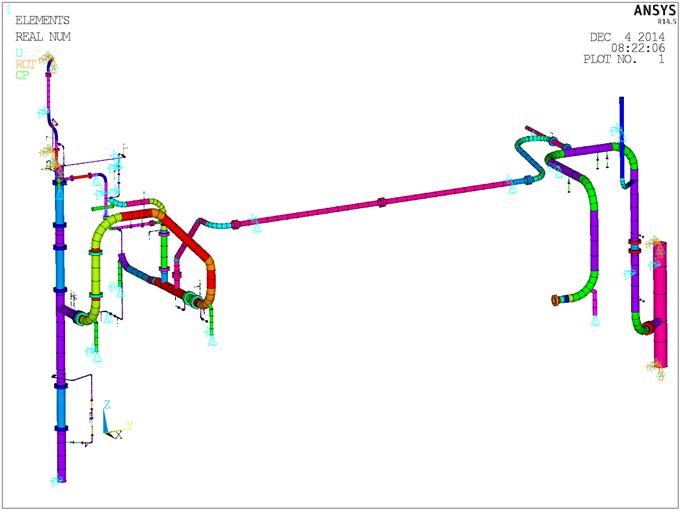 The ANSYS model of the piping system is shown in Figure 2.

Flow assurance provided the gas and liquid velocity along pipe length of Case 2 (150 MMScfd average pigging rate) at 1 second-intervals. Only the data from the time period with maximum velocities have been used because the peak velocities are significantly higher than the velocities outside of this time period. The maximum velocities of different pipes are listed in Table 1.

The forces on bends and tees due to slug flow can be calculated by Equation (1).

Notice that the maximum fluid velocity, presented in Table 1, doesn’t always appear at pipe bend location. The fluid velocity also changes with time. The forces on bends and tees are calculated based on the time history of fluid velocity including the local maximum velocity at that location. 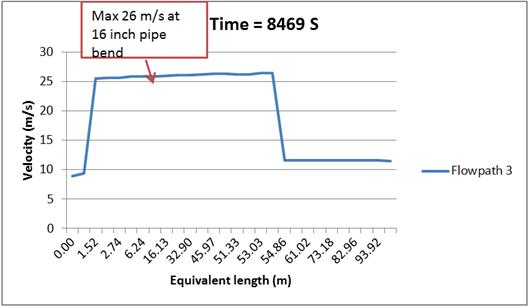 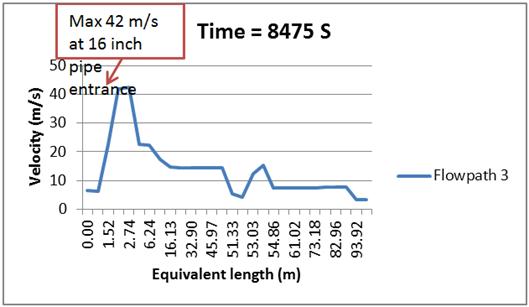 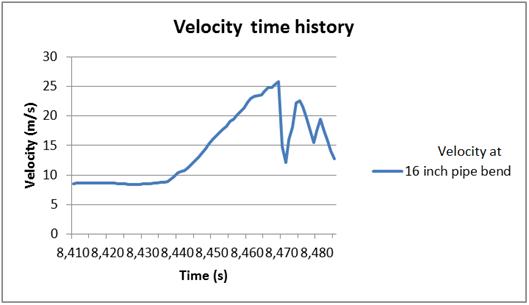 The forces applied at the bend at all time points are calculated based on the fluid velocity time history. Therefore the load at each bend and tee changes at every second in accordance with the velocity data from the flow assurance analysis.

Table 2 shows the calculated slug force applied at each node of ANSYS FE model. Each node in the first column is related with an elbow or tee of the piping system. Some of the nodes have been marked in Figure 7. For every node (elbow or tee) in Table 2 there is time varying slug flow velocity like Figure 6. Correspondingly each node has time varying slug force calculated from the velocity like Figure 5.

The slugging load case has very limited occurrence during pipe operation. In the analysis only dynamic forces due to slugging are considered. Constant loads (e.g. due to pressure and self-weight) are not included for this special case.

The structural damping is assumed to be 1%. The primary effect of the damping is to control the decay of the response after the initial step response. The influence of damping ratio over maximum stress level is negligible.

The extreme value is identified as 207 MPa when time is 50.6 s. Figure 8 is the von Mises stress contour plot at 50.6 s of the entire system. The location of maximum stress has been marked by a red circle. The stress unit in the contour plots is Pascal instead of MPa. It can be seen that the maximum stress appears at the lower 45 degree elbow of the 16 inch pipe.

Detailed view of stress contour plot for the 16 inch pipe elbow area is shown in Figure 9. 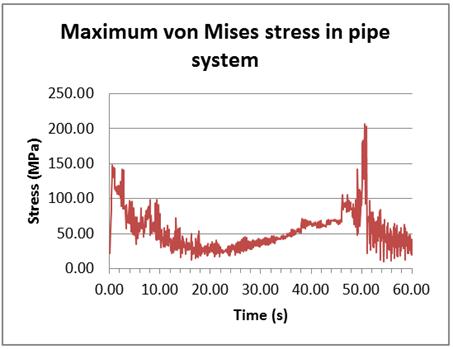 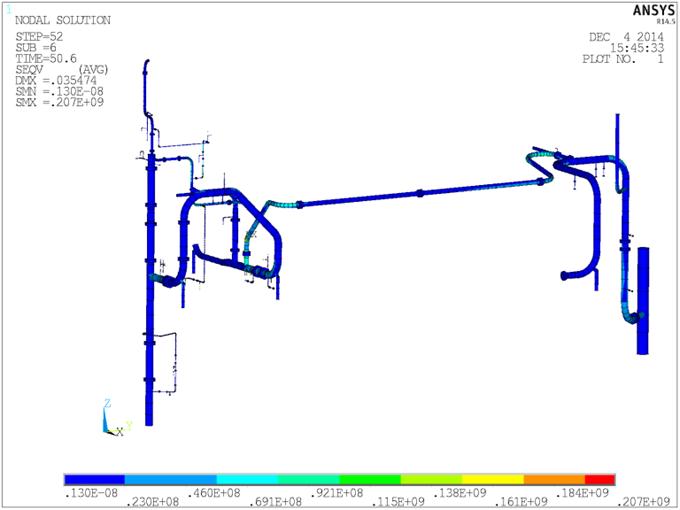 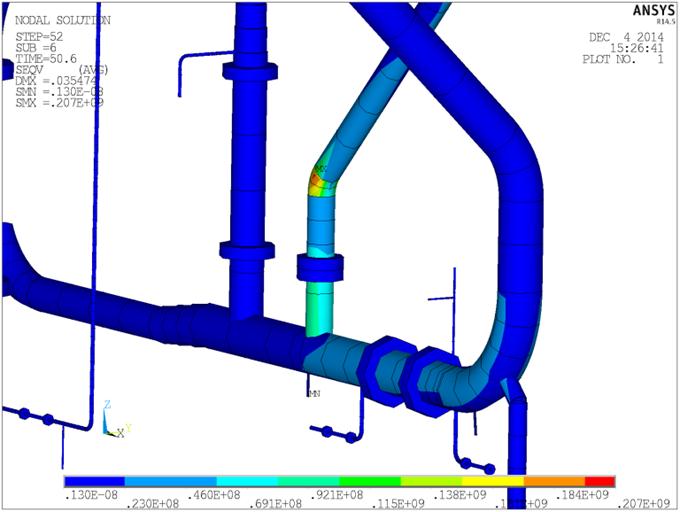 Figure 10 shows the time history of the maximum von Mises stress for the two elements at the elbow location in Figure 9.

It can be seen that stress level at this elbow exceeds the allowable stress 137 MPa at various time points. Therefore necessary modification is needed in order to reduce the stress during pigging process.

Stress contour plots and time history plots of other locations with high stress are listed in the Appendix.

Based on the analysis results, following measures are recommended in order to reduce the pipe stress due to slugging flow:

Figure 11 shows the maximum von Mises stress in the whole system during 60 seconds period with above the recommended modifications. It can be seen that the stress level is well below allowable stress 137 MPa.

This paper presents the process of the strength analysis of a platform topside piping system during pigging/slugging. The flow assurance analysis by OLGA calculated the velocity history in each pipe. Then the time history of forces was applied at each elbow/bend of the ANSYS structural model. By performing transient analysis, the von Mises stress time history was obtained. The maximum stress of the original design structures has exceeded the allowable limit. Therefore modifications by adding more supports are proposed. With the recommended modifications, the maximum stress of the piping system during pigging/slugging process will be within the limit. 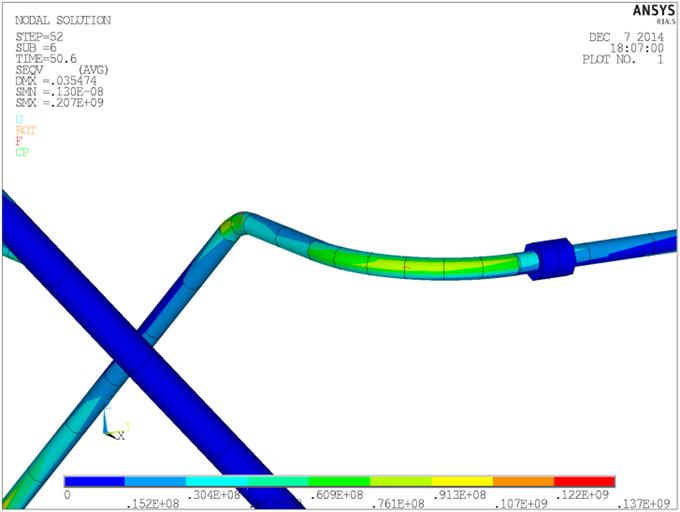 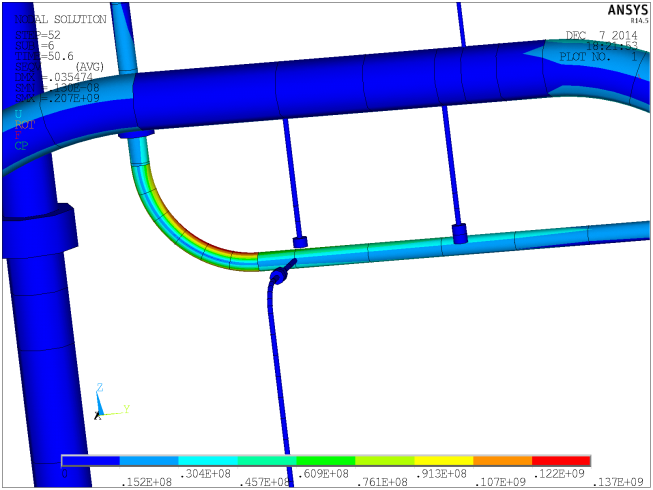 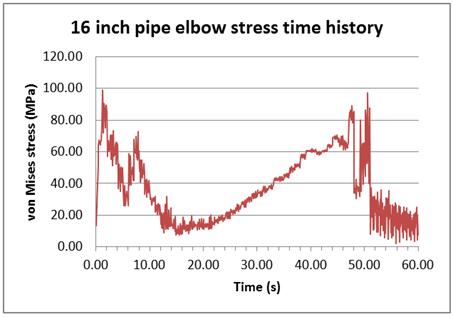 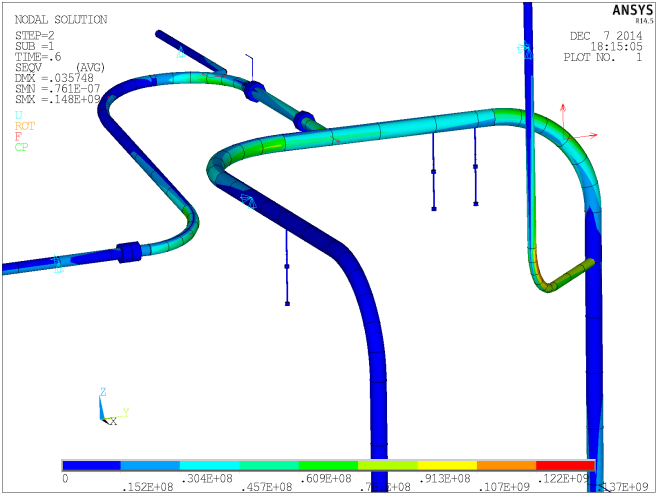 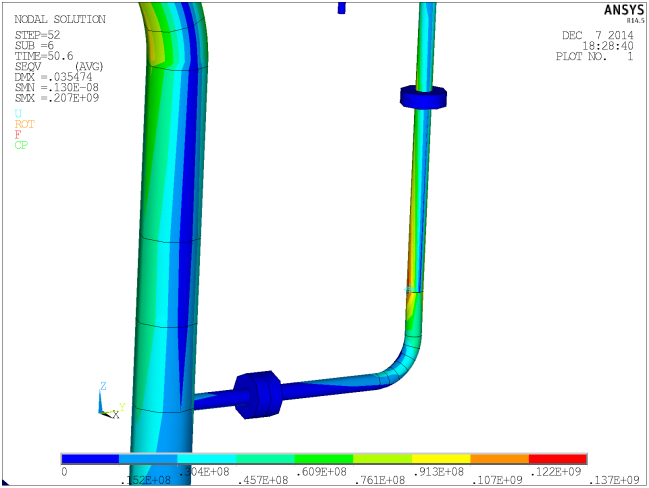 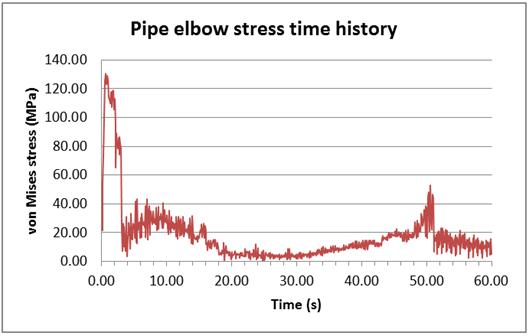 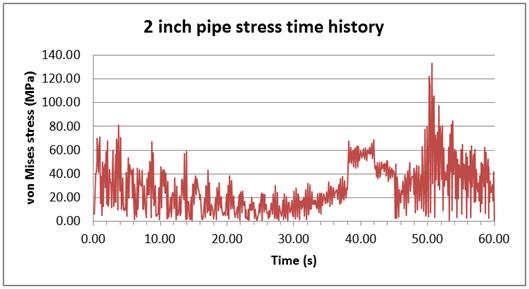