Abstract: This paper is devoted to studying the dynamic response of a high building on an elastic foundation with cracks on the column of the building under earthquake loading using the finite element method (FEM). The authors used a 3D modeling frame - plate system and integration method developed by Newmark, along with construction calculation programs in the Matlab environment to analyze the problem. The results were reflected the effect of the cracks on the columns and other parameters.

When Ming Ming Yao [1], Mourad Nasser [2], and Sushma Pulikant [3] used the finite element method with a space frame model to simulate a high building under earthquake loading, including foundation replacement via contact connection, they analyzed the dynamic response of the earthquake effect-bearing system. Their findings showed the impacts of foundation parameters as well as structure on the displacement of stories’ floors. More recently, Aslan Sadeghi Hokmabadi [4], and Ahmed Abdelraheem Farghaly [5] used the finite element method to calculate the earthquake loading of a high building, including the use of a space frame model for simulating high building and viscous connection - foundation modeling elastic spring. This showed the impacts of height on the displacement of stories’ floors and shearing force in a high building frame. When D. K. Jain and M. S. Hora [6] used ANSYS software and BEAM4: 3-D elements to describe lateral displacement, SHELL63 to describe the floor surface, and SOLID45 to describe cushion course, they developed the model of a high building under seismic load. J. Sandhya Rani, P. Srinivas Reddy and M. Koti Reddy [7] analyzed high buildings having a water reservoir located in different positions of the overstory under earthquake loading, including situations of different numbers of stories. Their findings showed the effects of the location of the water reservoir on the displacement of the overstory floor and cutting force in the column base. As well, they initially provided some results of cutting force, moment in the footing, and seismic load converted following the equivalent standard. Unlike previous studies, the aim of this article is to study algorithm, calculation method and working conditions and more specifically to select suitable parameters (for structure) for a high building having cracks in the column base. This is an original approach that the authors want to mention in this research.

A high building is modeled using the frame-plate composite system in the general coordinate system (X, Y, Z) under earthquake loading following X and Y directions as per Figure 1. 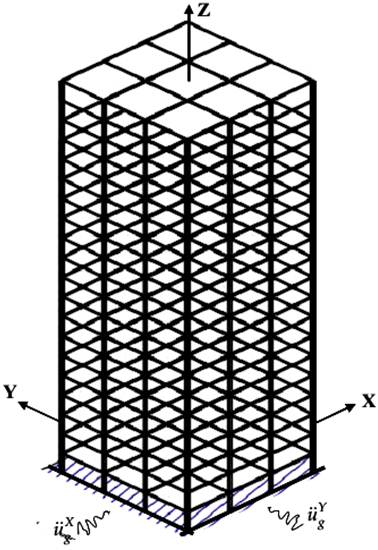 Hypothesis: Materials have a structure of linear elasticity, and small deformation. Panel satisfies Reissner - Mindlin theoretical conditions. Only the horizontal acceleration of the foundation is considered. Construction work columns and foundation operate simultaneously.

The beam element is shown in Fig. 2, and each node has 6 degrees of freedom, including ui, vi, wi,θxi, θyi, θzi. 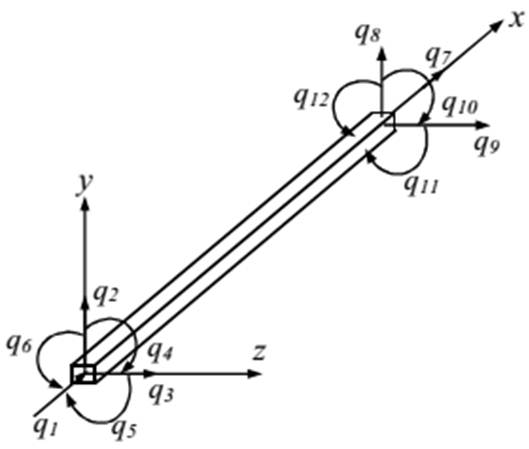 Displacement in any node of the bar with (x, y) coordinates is identified as follows [8], [10]:

U, v and w are the displacements along x, y and z;

θx is the rotation of cross section about the longitudinal axis x; and

θx and θz denote rotations of the cross section about y and z axes.

is the coordinate axes transition matrix [8].

node load vector of element in the natural coordinate system is:

of the cracked element can be written as:

is the reduction in the stiffness matrix due to the crack according to Peng et al. [13].

Figure 3. Model of 4-node plate element and the coordinate system.

where, u0, v0, w0 correspond to displacements of plate average, and θx, θy correspond to rotation angle of normal section of the plate plane in the survey node.

E is Young’s modulus, and n is the Poisson coefficient of materials.

is identified as follows:

Displacement components of any node of the element [8]:

Ni is shape function of node i.

is element node displacement vector, and

The total potential energy expression of the element is written as [8]:

are stiffness matrix and node load vector of the element,

Kinetic energy Te of the element [11]:

ρ is specific volume of material,

is element mass matrix, and

2.2. Vibration Equation of the System

for volume concentrated in nodes of the system, and represented as [7], [9]:

is coefficient vector representing displacement in nodes due to horizontal displacement of soil by unit; vector structure includes elements 1 and 0 upon degrees-of-freedom of each node and number of foundation acceleration dimensions.

is loading vector due to earthquake effecting nodes (force of inertial), caused by soil acceleration on node  convergence volume of the element.

Use of Hamilton principle for the element:

Te is kinetic energy and

Πe is potential energy of the element.

Then we have the equation of oscillation description of the element:

where {R0}e is the external force vector (not earthquake loading).

After combining the matrices and element load vector to become general matrices, and load vector, we have the equation of vibration of the system as follows [14]:

are the acceleration, velocity, and displacement vectors of the system, respectively;

This is a linear equation; the correct position of such equation depends on time. This equation is solved using the Newmark direct integral method and programming in the Matlab environment, including the earthquake loading vector updated after each time step.

The calculation program was developed by the authors, and is called 3D_frame_earthquake.m. 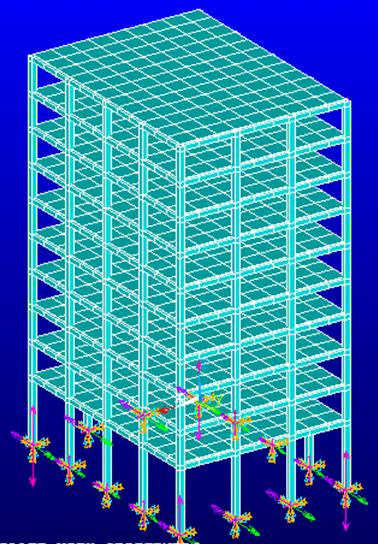 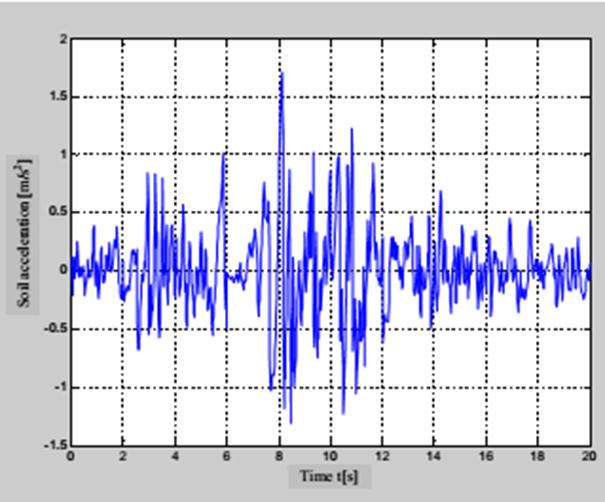 Results export: Central point of the 9th story’s floor (point A) and column base in the middle and front sides of the building (point B).

The displacement u at the point A and bending moment My at the point B are shown in Fig. 6, 7 following time. 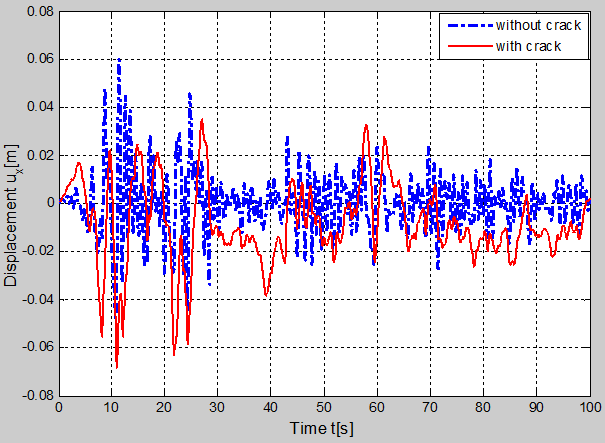 Figure 6. Time history of u displacement. 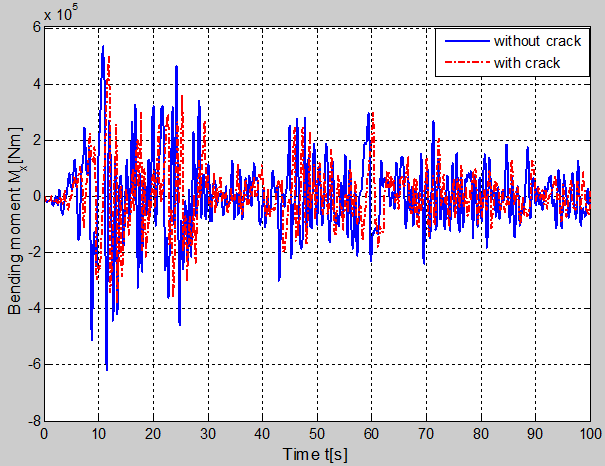 Table 1. The maximum of the displacement and bending moment (with crack and without crack).

The crack affects the dynamics of the building accordingly in the event of an increase in the cracks in the column, and the displacement of the building.

Survey is conducted in two scenarios, with damping and without damping. The results in terms of horizontal displacement and bending moment at points A and B are as shown in Figs. 8, 9 and Table 2. 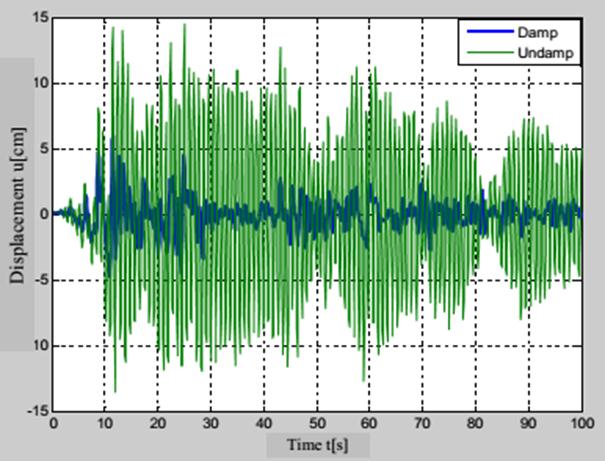 Figure 8. Time history of u displacement. 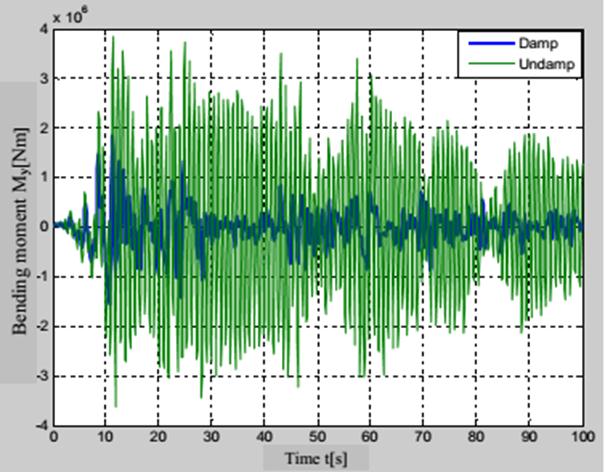 Table 2. The maximum of displacement and bending moment (with damping and without damping).

The damping of the structures affects the dynamic of the building and reduces the displacement and internal force.

4.2. Influences of the Building Height

The relationship between the height of the building end the displacement of the floors of each story is shown in Fig. 10. 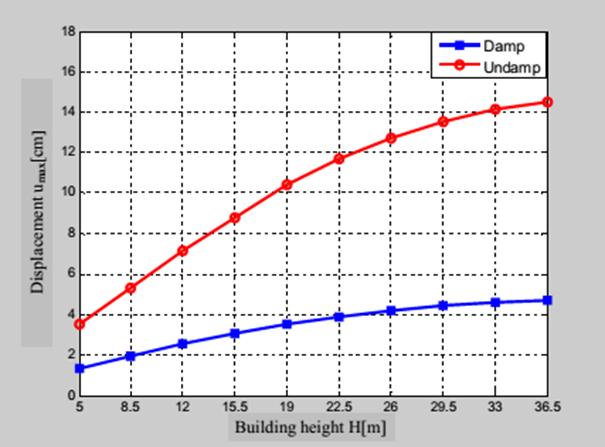 Figure 10. Relationship between the height of the building and the displacement of floors.

m (1.28 times-with damping, 1.26 times-without damping). This shows that the solution of decreasing vibration in intermediary positions of the building is reasonable.

Our research arrived at several main results, including the development of an algorithm and dynamic analysis program for high buildings under earthquake loading, foundation acceleration following two orthogonal directions in the horizontal plane, and the use of a 3D modeling frame-plate system with cracks on the main column. The numerical analysis conducted in some Mathematics problems with changing parameters reflects the suitability of the calculation model; algorithm and calculation capacity of the program. The results contribute to the calculation, design and selection of reasonable solutions for new design, diagnosis of damages and reinforcement of modern high buildings.