Abstract: Concrete is a common material used in the Nigerian building industry. It is obtained by mixing cementitious materials, water, fine and coarse aggregates and sometimes admixtures in required proportions. Admixtures are added to concrete to modify its properties so as to make it more suitable for any situation. In recent times, building collapse in Nigeria has been a source of concern particularly to those associated with the building industry. This has necessitated the need to check the effect admixtures have on some properties of concrete. This study investigated the effect of calcium chloride (CaCl2) as an admixture on the compressive strength of concrete produced from Dangote, Elephant and Burham brands of cement available in Nigeria. The impact of calcium chloride admixture on the compressive strength of concrete made from these brands of cement was compared with the compressive strength of concrete without calcium chloride. Sieve analysis, natural moisture content and specific gravity tests were carried out on the aggregates used in the production of the concrete and the results were recorded. Slump tests were carried out on the fresh concrete containing CaCl2 and without CaCl2 and the results were also recorded. Cubes produced from the concrete were cured for 7, 14, 21 and 28 days respectively. The mean densities of the concrete cubes made from the three brands of cement with and without admixture were computed. The corresponding mean compressive strength for the concrete cubes was also computed. The results showed that concrete with calcium chloride have higher compressive strength compared with those without calcium chloride.

Concrete has been the most common building material for many years [1]. It is obtained by mixing cementitious materials, water, aggregate (usually sand and gravel or crushed stone) and sometimes admixtures in required proportions. Fresh concrete or plastic concrete is freshly mixed material which can be moulded into any shape for it to harden into a rock-like mass known as hardened concrete. The hardening is as a result of chemical reaction between water and cement. Portland cement is the most common type of cement in general usage. It is a basic ingredient of concrete, mortar and plaster [2]. Anything other than cement, water and aggregate (fine and coarse aggregate), if added in concrete either before or during mixing to alter the properties to our desired requirement are termed as admixtures [3].

In recent times, building collapse in Nigeria has been a source of concern to so many people particularly those associated with the building industry. This is so because there are so many cases of building collapse all over the world and particularly Nigeria. Most of these cases had resulted into colossal economic losses in terms of lives and property [4]. This has necessitated the need to check the effect admixtures have on some properties of concrete.

This research was aimed at investigating the effect of calcium chloride (CaCl2) as an admixture on the compressive strength of concrete produced from Dangote, Elephant and Burham brands of cement in Nigeria.

2. Collapse of Building Structures in Nigeria

In recent times in Nigeria, there have been several cases of structural collapse of buildings, especially in Abuja, Lagos and Port Harcourt where several construction works are presently going on. Several of these incidents occurred in buildings that had outlived their life spans, some were still undergoing construction, some had been declared unsafe and undergoing demolition while others were already completed and in use when the sudden collapse occurred. Figures 1 and 2 show some of the collapsed buildings in Nigeria. 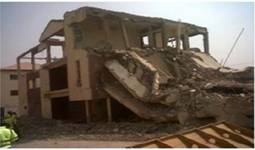 The quality of concrete is judged largely on the strength of that concrete. Strength is usually the basis for acceptance or rejection of the concrete in a structure. A deficiency in the strength of concrete can lead to expensive and difficult repairs or at worse a failure of the structure. Concrete is an excellent material for resisting compressive loading. Compressive strength of concrete is usually determined by means of test cylinders made of fresh concrete on the job and tested in compression at various ages of the concrete. The requirement is a certain strength at an age of 28 days or such earlier age as concrete is to receive its full service load or maximum stress. Additional tests are frequently conducted at earlier ages to obtain advance information on the adequacy of strength development where age-strength relationship have been established for the materials and proportions used [6].

1.  Cement Company of Northern Nigeria Plc: They are the producer and marketer of Sokoto BUA brand of cement in Nigeria. They are located at Km 10, Kalambaina Road, Sokoto, Sokoto State, Nigeria.

2.  Dangote Group: The Head office of Dangote Group is located at 1 Alfred Rewane Road, Falomo Ikoyi, Lagos, Lagos State, Nigeria. They are the manufacturer of Dangote brand of cement in Nigeria.

4.  Lafarge Cement WAPCO Nigeria Plc: They are the manufacturer of Elephant brand of cement in Nigeria. Their Head office is located at Km 64, Lagos/Abeokuta Expressway, Ewekoro, Abeokuta, Ogun State.

Admixtures are materials other than cement water and aggregate that is used as an ingredient of concrete and added to the batch immediately before, after or during mixing. They are used to modify the properties of concrete so as to make it more suitable for any situation. Admixtures, although not always cheap, do not necessarily represent additional expenditure because their use can result in concomitant savings, for example, in the cost of labour required to effect compaction, in the cement content which would otherwise be necessary, or in improving durability without the use of additional measures [7].

Calcium chloride has been used in concrete since 1885 and finds application mainly in cold weather, when it allows the strength gain to approach that of concrete cured under normal curing temperatures [8]. In normal conditions, calcium chloride is used to speed up the setting and hardening process for earlier finishing or mould turnaround.

The following materials were used in producing the concrete used in this research work:

Granite and Sharp sand which are extremely needful materials for production of concrete are the product of natural or artificial disintegration of rocks and minerals. Clean aggregates, free from waste stone and impurities were used in the production of the concrete used in this research work.

Portable water which is free from suspended particles, salts and oil contamination were used throughout this study as specified by [11].

A mix ratio of 1:2:4 was adopted for the concrete production. Batching was done by weight.

The following tests were carried out:

and weighed. The samples were sieved by using a set of IS Sieves and electric sieve shaker. On completion of sieving, the materials on each sieve were weighed. Cumulative weight passing through each sieve was calculated as a percentage of the total sample weighed. Fineness modulus was obtained by adding cumulative percentage of aggregates retained on each sieve and dividing the sum by 100.

The samples were first screened on BS sieve thoroughly to remove grass particles and other deleterious materials. The weight of the empty density bottle was recorded as

. The sample used was filled into the density bottle and weighed; the weight was recorded as

(weight of bottle + dry sample). The density bottle was gradually filled with distilled water to gauge mark, soon after the end of soaking, air entrapped and bubbles on the surface of the aggregate sample were removed by heating the density bottle on a water bath and the weight was recorded as

(weight of bottle + distilled water). The equation used to determine the specific gravity of aggregate is given in Equation 3:

The internal surface of the cone mould used was thoroughly cleaned and applied with a light coat of oil. The mould was placed on a smooth, horizontal, rigid and non- absorbent surface. The mould was then filled in three layers with freshly mixed concrete, and each layer was tamped 25 times with tamping rod. After the top layer was rodded, the concrete was struck off the level with a trowel. The mould was removed from the concrete immediately by raising it slowly in vertical direction. The difference in level between the height of the mould and that of the highest point of the subsided concrete was measured using a meter rule. This difference in height in mm was recorded as the slump of the concrete.

Sieve analysis, natural moisture content and the specific gravity of the aggregate were determined and recorded.

From the sieve analysis, the following fineness moduli were obtained:

These values fall within the acceptable limits for fine and coarse aggregates [12].

These values are within the acceptable limits for fine and coarse aggregates [13].

Workability is the ability of fresh concrete mix to mould or form properly with the desired work without reducing the concrete quality.

Hardened concrete assumes important properties that are retained for the life of the concrete and these properties include density, strength and deformation under load and durability among others.

Table 1. Result of Slump Test for Concrete Made with different brands of Cement

Table 4. Mean Compressive Strength of Concrete Cubes Made from the three brands of Cement with Calcium Chloride

Table 5. Mean Compressive Strength of Concrete Cubes Made from the three brands of Cement without Calcium Chloride 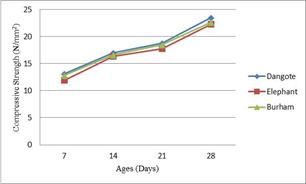 Figure 3. Graph of Compressive Strength against Ages of concrete without Calcium Chloride. 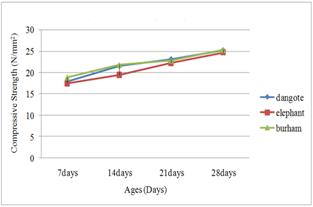 Figure 4. Graph of Compressive Strength against Ages of concrete with Calcium Chloride.