Abstract: Introduction: Neonatal sepsis is one of the major causes of morbidity and mortality in newborn. Early onset neonatal sepsis (EONS) is a severe disease and has high mortality rate. The clinical signs of EONS are nonspecific and the confirmation of diagnosis may consuming time. Therefore, the diagnostic approach is necessary by considering the risk factors. Objective: The aims of this study are to identify the risk factors of newborn infants whose mother has risk factors of sepsis affecting the occurrence of EONS. Methods: This is a cohort retrospective study, conducted from January 2013 to June 2014 in Neonatology Installation of Dr. Wahidin Sudirohusodo hospital, Makassar. The sample population included newborn infants whose mother has risk factors of sepsis. The information of the risk factors from infant and diagnoses of EONS was obtained from their medical record. Multivariate analysis and logistic regression formula were performed to predict the occurrence of EONS. There were 221 samples: 62 cases of EONS and 159 of control. Results: The results of multivariate analysis revealed 3 risk factors from infant which were associated to EONS: APGAR score <7 (p= 0.000, AOR 14.05 with 95% CI 5.48-35.98), gestational age <37 week (p= 0.000, AOR 13.45 with 95% CI 3.91-46.26), birth weight <1500 gram (p= 0.04, AOR 4.9 with 95% CI 1.08-22.25). Conclusion: Based on this study, it concluded that the risk factors of EOS were: APGAR score, gestational age and birth weight.

Neonatal sepsis is a clinical syndrome occurs because of microorganism invasion into the blood on the first month of life.4 Basically, the fetuses were still wrapped by layers of amnion adequately shielded from bacterial flora’s mother because of the cervical plug, which is the placenta barrier and antimicrobial proteins and peptides in it.5, 6 Even though the probably of microorganism contamination can occurs by a several ways, such as transplacental, which is the ascending infection from cervical or by the birth canal during the birth process.7 On exposed, the babies are shaping the immune response to maintain their body from the infection.8 Several factors of mother, babies, and environment are contribute to the infection exposed and non optimal of NM immunologic response so as the newborn become susceptible to be infection.9

There is a dilemma on the sepsis management, that if there is a delay of treatment will increase the mortality rate of over 50%. If not be therapy while the over diagnosis happens, due to the non particular of clinical illustration will make the over treatment and harm the patient and his/her family. Hence, the clinic decision by the clinicians against the newborn that is apparently healthy or with a minimal of sepsis symptom. Furthermore, even asymptomatic bacteraemia can be done accuracy and faster with a risk factor consideration considering of several support examine to confirm the diagnosis need a lot of time.10 This study aims to identification the risk factors of neonatal from the mother with risk factor of EONS occurrence. 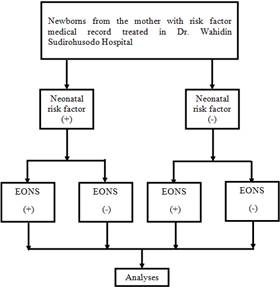 An observational with a retrospective cohort study conducted at neonatology installation of Dr. Wahidin Sudirohusodo Hospital in Makassar, from January 2013 to June 2014. We assess the incidence and identification of the neonatal risk factors relation to the EONS by using a data from patient’s medical records. Newborn, aged under or of 3 days birth consecutively recruited. Written informed consent was obtained from the patients’ parents or legal guardian following full and detail explanation regarding the study’s protocol.

Study samples are from all the affordable population that met the inclusion and exclusion criteria. The inclusion criteria are all the newborn from the mother with risk factor treated in Dr. Wahidin Sudirohusodo and age under or of 3 days. While, the exclusion criteria are the newborn with congenital abnormalities, birth from the mother with TORCH and the patient with incomplete data. The ways of taking sample is from the patient medical records related to the study. Then it is grouped into two group of neonatal with early onset neonatal sepsis (EONS) and non EONS, and done recording of infant infection risk factors.

All the data obtained are noted in the study data form, then grouped based on the objectives and types of data. Then, the data is analyzed to assess the relationship of the infection risk factor of the infant with EONS by the suitable statistical methods includes the univariate, bivariate, and multivariate analysis.

3.3. Identification of the EONS Risk Factors

Sexual dimorphism from the human immune response is quite clear; female produces the more active of cellular immune reaction and humoral so that they are more resistant to the infection.13 But, our result shows there is no relationships between the sex to the EONS (p= 0.203). This is accordance with the report by Shah et al., with p= 0.2.9 The study in India also reported that there is no significant between both of the sex with infection rate between male (2.05%) and female (2.08%).12

Our study result shows that the gestation is also the risk factor with 13.45 times (95% CI 3.91-46.26). In Inggris, the infants birth <37 weeks have a risk 12.1 times (95% CI 2.7 to 53.8) obtained EONS because of GBS (group B streptococcus) compared to the term baby.17 The same case also reported from Nepal, with a risk 4.85 times EONS happens on the preterm baby.9 In Mexico reported the preterm baby have a risk of 2.19 times on EONS while on LONS (late onset neonatal sepsis) is not significant.18 This is happens because of the preterm baby have a limited capacity in increasing the neutrophils production in order to response the infection and the neutrophils dysfunction.19 The impaired neutrophil function have reported apparent when it is <30 weeks of gestation.20 Rebuck et al., found the L-Selectin expression on newborn with >32 weeks of gestation is about 40% of adult.21 This amount is equal to the term infants. Carr et al., also reported the newborn <32 weeks have a low sFcRIII concentration and increase faster when it is 33-36 weeks of gestation.22 sFcRIII is responsible for initiating opsonization and phagocytosis.The decreased of opsonization and complement protein deficiency also occurs whereas both of it are the main component of the non specific immunity which is the first line of defense against microorganisms in neonates. It makes the newborn is susceptible to infection and often develop into a severe infection.19 Besides, IgG transfers begin since 12 weeks of gestation and reach out the 400 mg/dl in 32 weeks of gestation.23

Bhat and Baby reported the low birth weight have a risk of EONS 10 times compared to the normal birth weight.24 Whereas according to Shah et al., the low birth weights (LBW) have a significant with Odds Ratio 4.85.9 But, Leal et al., shows LBW (≤2500 g) is not a risk factor neither to the EONS or LONS.18 In our study, low birth weight did not have a significant to the EONS occurrence (p= 0.162). This is occurs because of the LBW on our samples are dominated by the birth weight 1900-2499 gram which a birth weight of the late preterm baby while the low immunity in the LBW mainly occur on the gestation <32 weeks or among the birth weight <1500 gram. It is strength by the research by Wolkowiez et al., reported there is no significant between the term baby to the late preterm with a lowest birth weight of 1920 gram to EONS (p= 0.126).25 Therefore, we analyzed again the logistic regression with the birth weight category <1500 gram (very low birth weight (VLBW)) and ≥1500 gram. We found that the VLBW are more common in a risk of 4.9 times (95% CI 1.08-22.25) to the EONS occurrence. In America, the EONS incidences have increases to 10 times higher than the VLBW.26 Benitz et al., found that the EONS risk is increase along with a decrease in the birth weight.27 Physical barriers such as skin, the mucosa membrane and chemicals that are antibacterial or inhibit the adhesion of bacteria to the host began mature around 32-34 weeks of gestation and accelerated after the birth. That’s why the IgA level is produces by the mucosa protection layer, lowest on the VLBW.23 Seidel et al., found the same levels of sIgA between newborn with 30 weeks of gestation (range of birth weight 1200 grams) with the term baby.28 VLBW also have the ability to decline significantly in the case of actin filament formation and neutrophils plasticity of the transmigration.23 Gahr et al., reported the interference in respiratory burst on newborn <2000 gram.29 VLBW also only had a terminal cytotoxic components value such as C3 and C3b about 10% or less of the content of his mother and difficulty in activating the complement through the lectin and alternative way. Consequently, the result is a complement dysfunction of VLBW, such as a chemotaxis function, opsonization and killed the pathogens through the membrane attack complement. In VLBW also occurs the deficiency of molecular reactants phase such as CRP, inhibitor protein, A amilod protein and several of the coagulation protein which have a function to increase the resistance to the infection. VLBW had a lot of neutrophil in circulatory pool but it reserves in the bone marrow is only about 20% compared to the term baby and adults so that the state of sepsis occur severe neutropenia.23, 30

The strength of our study is using a multivariate analysis with a tight operational definition, so that the risk factor obtained is an independent factor. The other strength of this study is the risk factor analyzed can be discovering easily by the history and physical examine so the clinicians are easily to predict the EONS occurrence. Therefore, we are still using medical records and may need a further study with a prospective cohort method to obtain a stronger causal relationship and evaluate our regression model.