Ahmed Ragheb, Ahmed A. Sonbol. Study of the Validity of Neutrophil CD64 and Serum Procalcitonin as Diagnostic Markers to Discriminate Infection from Disease Activity in Patients with Systemic Lupus Erythematosus. American Journal of Clinical and Experimental Medicine. Vol. 3, No. 3, 2015, pp. 110-117. doi: 10.11648/j.ajcem.20150303.17

Systemic Lupus Erythematosus (SLE) is a complex autoimmune disease with heterogeneity in clinical manifestations and disease course, characterized by pathogenic autoantibody formation, immune complex deposition, and end-organ damage. Despite the fact that the mortality and morbidity of patients with SLE has improved significantly during the last few decades, mortality rates remain approximately three times those of the age-matched and sex-matched population in most studies [1].

The complexity of the clinical presentation of both infections and disease activity in SLE patients requires investigations that may be of diagnostic value. Unfortunately, common screening laboratory tests employed to diagnose infections such as leukocyte numbers, presence of immature forms, CRP and ESR have poor sensitivity and specificity. Culture results are often viewed as confirmatory, but in practice they are often not used in treatment decisions because of their relatively slow turnaround times of up to 72 hours or more [2]. Due to the major differences in treating the two different situations, activity or infection, a rapid diagnosis is mandatory. Physicians are therefore always on the lookout for a method that would be helpful in the difficult decision as to whether to initiate antibacterial therapy or not [3].

Neutrophil granulocytes express their Fcγ receptor 1 (CD64) antigen, predominantly when they are activated. CD64 is a type of integral membrane glycoproteins known as Fcγ receptor 1 that binds monomeric IgG with high affinity [4]. Expression of the CD64 antigen on neutrophils has been under investigations for some years as a biomarker of infection and sepsis. On resting neutrophils, CD64 expression is low and after activation it is significantly up regulated within few hours. CD64 expression represents a physiological process which plays a key role in the innate immune response [5].

Procalcitonin (PCT) is a precursor of calcitonin that is primarily produced by parafollicular or calcitonin cells of the thyroid gland. Serum PCT is normally undetectable (<0.05 ng/ml) in healthy individuals, but its level increases rapidly following bacterial infection [6]. In contrast to CRP, expression of PCT is not elevated following non-infectious inflammation or non-bacterial infections [7-9].

The protocol for this study followed the ethical standards and was approved by the ethical committee of our institution and all subjects gave informed consent to participate in this study. The present study was conducted as a case control study on all SLE patients (n=55) who were registered at the inpatient department and SLE special outpatient clinic in Menoufia University Hospitals from June 2013 to June 2014. Patients were distributed as following; group II: included 20 SLE patients without activity or infections (patients attending the outpatient clinic for follow up), group III: included 20 SLE patients with lupus activity and group IV: included 15 SLE patients with infection. In addition, 20 normal females were included as controls in group I. They were defined by self-report and confirmed by physician observations. All subjects underwent full history taking and complete physical examination. Diagnosis of SLE (in groups II, III and IV) was done according to the 1982 revised criteria for the classification of systemic lupus erythematosus [10] updated in 1997 [11]. Diagnosis of SLE activity (in group III) was according to the 2002 modified Systemic Lupus Erythematosus Disease Activity Index score (SLEDAI-2K) [12]. SLEDAI score change > 12 was required to diagnose severe activity. Diagnosis of infection (in group IV) was depending on pathogen proven by microbiologic culture [13].

Flow cytometric determination of neutrophil CD64 expression was performed. Samples were processed within 24 hours of collection, and whole blood samples were diluted with PBS. For each sample, two tubes were prepared (one for test and the other for the isotypic control); 100 μl of the diluted sample was added to 10 μl MoAbs (MCA756F) mouse antihuman CD64 : FITC (abcam, Cambridge, MA, USA), vortexed, and incubated at room temperature for 15 min in the dark. Three milliliters of the Lyse solution was added to each tube, vortexed, and then incubated for 15 min at room temperature. The tubes were centrifuged at 3000 rpm for 5 minutes, and then the supernatant was discarded. The cells were washed twice with 2 ml PBS, with repeating centrifugation, followed by discarding of the supernatant [19]. Samples were then ready for processing on the flow cytometer. Data were acquired on a FACS caliber flowcytometer (Becton Dickinson immune cytometry systems, San Jose, CA, USA). The instrument set up was checked weekly using QC windows beads (flowcytometry standard, San Juan, PR). Results were expressed as percentages of neutrophils subset positive for CD64 marker and their mean fluorescence intensity [20].

Serum procalcitonin (PCT) was done by VIDAS® B·R·A·H·M·S PCT (bioMérieux, Marcy l'Etoile, France) which is an automated enzyme-linked fluorescent immunoassay (ELFA) based on a one-step immunoassay sandwich method and a final fluorescent detection step for the quantitative measurement of PCT. This immunoassay is performed on the mini VIDAS systems which are fully adapted for emergency conditions [21].

-The reaction occurs within the interior of the SPR whereby anti-calcitonin antibodies and conjugate form a sandwich.

-4-MUP is cycled into SPR and conjugate enzyme catalyses the hydrolysis of the substrate into 4-Methyl-umbelliferone which is measured at 450nm.

Measuring Range: 0.09-200 ng/mL. Quality Control: Two controls are included in the VIDAS B·R·A·H·M·S PCT kit to ensure the quality of the results obtained. Calibration: Is performed by using two calibrators (S1 and S2) included in the kit and is performed when a new lot of reagents is opened and then once every 28 days. This operation provides instrument-specific calibration curves and compensates for possible minor variations in assay signal throughout the shelf-life of the kit [22].

We used the statistical package of social signs (SPSS, version 16) to perform the analysis. Categorical data were presented as number and percentages and continuous variables as means ± standard deviation (SD). One way ANOVA test or Kruskal-Wallis test were used as appropriate for comparison of quantitative variables more than two independent groups. Intergroup comparisons were performed using the chi-square test, t-test, and Mann–Whitney U test as appropriate. Pearson’s correlation coefficient, r, was used to assess the relationship between CD64 and other variables in the three patient groups. Receiver operator characteristic (ROC) curve was used to determine cut off values of both neutrophil CD64 expression and serum PCT with optimum sensitivity and specificity in diagnosis of infection (i.e. between groups 3 and 4).

Table 1. Demographic and laboratory findings of the studied groups (n=75).

Table 2. Correlations between neutrophil CD64 expression and other markers in SLE patients (n=55).

Table 3. Correlations between serum PCT and other markers in SLE patients (n=55).

Table 4. Cut off levels of CD64 expression, serum PCT for differentiating infection from activity in SLE patients (between groups III and IV).

Table 5. Validity of the individual and combined tests of CD64 expression and serum PCT for differentiating infection from activity in SLE patients (between groups III and IV). 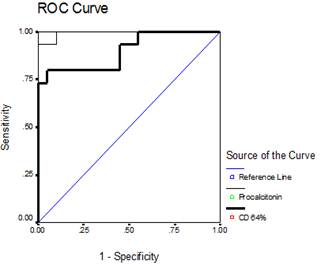 Figure 3. ROC curves of CD64 expression and serum PCT for differentiating infection from activity in SLE patients (between groups III and IV).

Infection is responsible for approximately 25% of all deaths in patients with SLE, making it a leading cause of mortality among those patients [23]. In autoimmune inflammatory diseases, infection is often hard to be detected because fever, malaise and other constitutional symptoms do not enable physicians to distinguish infections from a flare of the underlying disease [3]. The usual laboratory tests can be misleadingly low in patients with systemic infections who are receiving corticosteroid or cytotoxic treatment. On the other hand, they may be misleadingly high in those with active rheumatic diseases. A positive culture usually requires 24 hours or longer before results can be obtained [24]. In clinical practice, due to the major differences in treating the two different situations, flare or infection, a rapid diagnosis is required to be helpful in the difficult decision as to start or increase immunosuppresion or to start antibacterial therapy and reduce immunosuppresion if needed.

One of the most useful applications of CD64 is probably its ability to distinguish between bacterial infection and acute flares in autoimmune disorders [25].

Similarly, expression of serum procalcitonin is not elevated following non-infectious inflammation or non-bacterial infections [26], so both markers may be useful as markers to distinguish bacterial infection from disease flare in patients with SLE. In the current work, we aimed to study the usefulness of both neutrophil CD64 expression and serum PCT as diagnostic markers to discriminate infection from disease activity in SLE patients.

We demonstrated ROC curves of both markers for differentiation between infection and activity in SLE patients. Hussein and coworkers stated that, a level of CD64 ≥43.5% was found to be both sensitive and specific (94.4%, 88.9% respectively) for detection of infection in patients with autoimmune inflammatory diseases [13]. Allen and colleagues confirmed the high sensitivity and specificity of CD64 expression on neutrophils to differentiate systemic infection from active inflammatory autoimmune diseases; those were 85% and 91% respectively [27]. In this work, we demonstrated that neutrophil CD64 ≥ 82.11% was found to have a sensitivity of 80% and a specificity of 95% in detecting infection.

In this work, serum PCT was found to be more accurate than neutrophil CD64 in detecting infection with AUC of 0.90 and 0.99 respectively. Serum PCT was also found to have a higher sensitivity but a lower specificity when compared with neutrophil CD64. The accuracy of both markers together has not been tested before for detection of infection in patients with autoimmune disorders. However, Cardelli and colleague found that CD64 had a better specificity when compared with PCT for diagnosing sepsis in ICU patients [35]. In another study PCT was compared with CD64 and soluble triggering receptor expressed on myeloid cells-1 (sTREM-1) in diagnosis of infection in critically ill patients, the best ROC curve was obtained by using CD64 [36]. Finally, Zeitoun and coworkers used PCT, neutrophil CD64 and Interleukin 10 (IL-10) for diagnosis of neonatal sepsis. They found that neutrophil CD64 had a better sensitivity and specificity when compared to PCT [37]. The possible differences between our results and the previously mentioned results could be explained by the difference in the type of patients enrolled in our study as the inflammatory state in SLE patients with activity also affects neutrophil CD64 expression [13].

The previous findings can prove that both neutrophil CD64 expression and serum PCT are reliable markers for diagnosis of infection in SLE patients. Serum PCT was more accurate than neutrophil CD64 expression. The use of the two markers enhanced the specificity with no effect on the sensitivity of PCT. Further more comprehensive studies are warranted to estimate reliable cut off levels that can be used clinically for the diagnosis of infection in SLE patients.