Abstract: There was carried out research concerning the following metabolic deterioration: the metabolic disorders of nicotinamide nucleotides and such macro-energy compounds as adenyl nucleotides, creatine phosphate and their metabolism enzymes in myocardium tissue in case of anthracycline-induced toxic cardiomyopathy. The results of influence of a new physiologically active compound carbicyl that possesses metabolic effect on bioenergenic processes when used in rats with anthracycline-induced heart failure are presented comparing with other cardiotonic agents of different pharmaceutical classes. This study shows that the administration of a metabolic cardiotonic agent carbicyl to the rats that suffer from adriamycin-induced cardiomyopathy significantly normalizes the state of redox processes in myocardium. Carbicyl normalizes the parameters of mitochondrial function; it decreases the deterioration of energy metabolism in cardiomyocytes; carbicyl increases the content of the oxidized forms of NAD+ and NADH+ coenzymes; and it increases the level of ATP, creatine phosphate and glycogen.

Despite numerous studies of biochemical and molecular mechanisms of the deterioration of cardiomyocyte contractile function and its energy supply in conditions of heart failure, they are still poorly understood [1,2]; they are one of the most urgent problems of modern medicine. Existing literature data indicate the importance of searching and studying the mechanism of action of new cardiovascular drugs that possess cardioprotective properties among the analogs of such natural metabolites as: amino acids, nucleotides, physiologically active nitrogen-heterocyclic compounds [3].

Macrocyclic polyethers are a rather perspective class of substances; these compounds possess a high biological activity due to their unique complexing properties and similar structure with ionophore antibiotics [4]. Therefore, it was rationally to explore the influence of new representatives of crown ether derivatives in comparison with well-known cardiotonic agents.

To achieve this goal it was necessary:

1.   to conduct a study of metabolic disorders of metabolism of such nicotinamide nucleotides and macroergic compounds as adenyl nucleotides, creatine phosphate and their metabolism enzymes in myocardium tissue in case of anthracycline-induced toxic cardiomyopathy;

2.   to study the influence of a new physiologically active compound carbicyl that is a uracil derivative and possesses metabolic effect on the bioenergetic processes in myocardium of animals with anthracycline-induced toxic cardiomyopathy comparing with other nonsteroidal cardiotonic agent (dobutamine).

The upset of bioenergetic processes in myocardial cells in case of experimental cardiomyopathy has been found in many studies [7,8]. However, there is no literature data concerning the cellular bioenergetic processes in myocardium during the experimental anthracycline-induced toxic cardiomyopathy that is realized by the administration of the cardiotoxic antibiotic adriamycin. That is why it became the subject of this research.

During this study it was observed that the administration of adriamycin in rats leads to the significant disruption of biological oxidation reactions and the delivery of energy substrates in cardiomyocytes. The evidence of such a deterioration is presented by negative dynamic in changes of the concentration and catabolism of such nicotinamide coenzymes such as NAD+ and NADP+ that are primary acceptors of electrons and protons in the electron transport chain in the mitochondrial membrane.

It was determined the significant (by 24.5%) concentration decrease of the oxidized pyridine coenzymes in myocardial tissue and the total amount of oxidized and reduced coenzyme’s forms in 1.5 time. This is a result of the limiting aerobic energy production in cells [9]. The activity of the enzymes that are responsible for the hydrolytic degradation (NAD+ glycohydrolase) was increased by 37.2% that can be regarded as one of the key biochemical mechanisms of reducing the concentration of nicotinamide nucleotides and therefore the deterioration of the biological oxidation processes in mitochondrial membranes. Apart from the biological oxidation connected with the oxidative phosphorylation process, in case of hypoxia and anaerobiosis the important substrates of energy metabolism for the permanent production of sufficient amount of ATP for the cardiomyocyte’s functional activity are glycogen and CP. 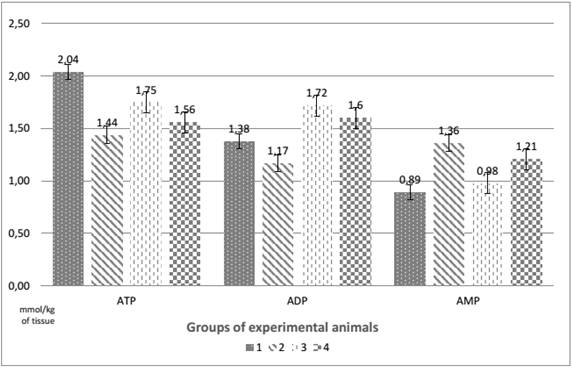 Figure 1. The carbicyl effect on parameters of adenyl nucleotides metabolism in myocardium of rats with adriamycin-induced cardiomyopathy

Table 3. Influence of nonsteroidal cardiotonic agents on the CP and glycogen content and the CPK activity in myocardium of rats with adriamycin-induced cardiomyopathy (M ± m).

Table 4. The carbicyl effect on the level of nicotinamide coenzymes and the NAD-hyrdolase activity in myocardium of rats with adriamycin-induced cardiomyopathy

The significance of CP that serves as a rapidly mobilizable reserve of high-energy phosphates for the ATP production due to the creatine kinase enzyme reaction is well established in many experimental studies [6,10,11].

According to the obtained data (see Table 1) the 5-week administration of adriamycin leads to a significant reduction of the glycogen level (by 56%) in comparison with the control group. The CP content was also decreased in the second group in 2.8 times and was accompanied by the CPK decrease by 43% concerning the control group. The changes in the amount of glycogen and creatine kinase system’s components are common for the toxic damages of the heart muscle, including the anthracyclines administration. Anthracyclines specifically bind to DNA by intercalating between the base pairs of the double helix, and thus the inhibitory action of DNA-dependent RNA polymerase is disrupted; and the intracellular regeneration processes of cardiomyocytes are deteriorated [12].

In order to evaluate the cardioprotective effects of a new physiologically active compound carbicyl in comparison with the beta-adrenergic agonist such as dobutamine it was carried out a study of the influence of the above mentioned physiologically active compounds on such metabolism indicators as nicotinamide nucleotides, the content of adenine nucleotides, glycogen and the state of creatine kinase system in case of adriamycin-induced toxic cardiomyopathy. According to the obtained data in those rats that were administered carbicyl during the adriamycin administration the content of oxidized forms of nicotinamide nucleotides was increased by 24.9%. The oxidized/reduced coefficient of pyridine nucleotides during the carbicyl administration had been increasing by 36.9%. The total amount of coenzymes was also increased and thus indicating the tendency of the normalization of oxidative processes. The NAD-hydrolase activity had been normalized during the experiment.

According to the data presented in Table 2 the adenylate pool reacts to the prolonged anthracycline antibiotic administration by the decreased level of ATP (-29.5%), the ATP/ADP ratio decrease (-16.5%) and the decreased phosphorylation potential (- 19.1%).

The simulated anthracycline cardiomyopathy is accompanied by a significant decrease in functional performance of the left ventricle, and is characterized by significant violations of energy metabolism in the heart muscle, as evidenced by the data of the presented experiments.

These data are entirely consistent with the morphological studies of myocardial tissue in case of anthracycline heart failure [13] and suggests that the deterioration of the energy supply system can lead to the defeats of subcellular mechanisms responsible for the act of contraction-relaxation, and be the cause of further deterioration of the pathological process. Among the possible biochemical mechanisms responsible for the formation of cardiomyopathy under the influence of anthracycline antibiotics may be the effect of these pharmacological agents on the system of Ca2+transport across membranes of cardiomyocytes. However, we should not forget that the relaxation of the myocardium is also an energy-intensive process as sarcoplasmic reticulum Ca2+ ATPase participates in this process, as well as significant amounts of ATP are necessary for the interaction of the last with the heads of the myosin filaments and the rupture of covalent bonds in actin-myosin complexes that are responsible for the relaxation process.

This is due to the high dependence of the process of relaxation of cardiomyocytes from phosphorylation potential [9], which also causes contribute to the violation of the functional properties of cardiac muscle in heart failure. In addition, there is evidence that adriamycin blocks proton-pumped NADH oxidase that participates in the synthesis of intracellular messengers, performing in the cell signaling function, namely involved in carrying out the core of a proliferative signal required for the activation of tyrosine kinases and activates the cascade of phosphorylation of membrane and cytosolic proteins of cardiomyocytes.

The influence of carbicyl and dobutamine on metabolism indicators of adenine nucleotides of rats in case of anthracycline-induced toxic cardiomyopathy is presented in Figure 1.

The obtained from this research data indicated that the adenine nucleotide system in myocardium of rats that were administered adriamycin also underwent fewer deteriorations: the ATP content was increased by 21.5%; the phosphorylation potential was increased by 13.7%; the AMP level was decreased by 28% concerning the group of animals that suffered from anthracycline-induced toxic cardiomyopathy; the content of inorganic phosphorus was approaching the values of the control group.

As it was indicated above, the important biochemical components of cardiomyocytes, the reserves of which have been significantly decreased under the condition of anthracycline-induced toxic cardiomyopathy had been glycogen and CPK; the latter one functions as a transporter under the action of CK is enzymes in the reactions of ATP synthesis. The results of study of the metabolic drug carbicyl influence in comparison with the beta-adrenergic agonist such as dobutamine on the content of glycogen and CK and on the CPK activity in myocardium of rats with anthracycline-induced toxic cardiomyopathy that was caused by adriamycin (see Table 3) indicate that the use of carbicyl increases the decreased concentrations of glycogen and CPK caused by adriamycin. Particularly the level of glycogen in myocardial tissue of animals that were administered carbicyl during the treatment with adriamycin exceeded the corresponding values in rats that were treated with adriamycin without metabolic drug; the glycogen content by 102% approached the control values.

Such significant protective effect of carbicyl was established in respect to CP concentrations, to CPK activity in the myocardium of rats with adriamycin-induced intoxication.

It should be emphasized that the tested compound carbicyl that possesses metabolic effects and has cardiotonic activity significantly activates the processes of energy production and the intensity of metabolism of myocardium of intact rats; moreover it significantly normalizes deteriorations in the system of macro-energy phosphates and nicotinamide coenzymes in case of anthracycline-induced toxic cardiomyopathy (see Table 4). Considerable improvements of the energy metabolism of myocardium in case of carbicyl use can probably be explained by its chemical structure that is similar to pyrimidine bases which due to the influence on the synthesis of nucleic acids and other regulatory molecules may affect the plastic processes in cells and processes associated with energy production.

1.   During this study there were investigated biochemical mechanisms of the deterioration of bioenergetics processes in cardiomyocytes in terms of anthracycline-induced toxic cardiomyopathy; this deterioration was presented by the upset of oxidative processes in mytochondria, by the decrease of the reserves of metabolic energy and such macro-energy compounds as glycogen, creatine phosphate, ATP and ADP that are biochemical substrates of the energy supply realized by myofibrillar actomyosin complex in case of heart failure.

2.   For the first time it was established that the administration to rats with anthracycline-induced toxic cardiomyopathy a new metabolic cardiotonic carbicyl that is chemically a crown ether derivative significantly normalizes the redox processes in myocardium; it reduces the severity of energy metabolism disorders in cardiomyocytes; it increases the content of the oxidized forms of coenzymes NAD+ and NADP+, increases ATP levels, CPK as well as glycogen.