Abstract: Investigation of mucosa immunoglobulin A (IgA) can be used to determine the prevalence of Chlamydia trachomatis (CT) infection, in addition to examination of Polymerase Chain Reaction (PCR) particularly in asymptomatic cases. This research is aimed to compare the levels of IgA mucosal urethral in asymptomatic Chlamydia trachomatis infection and non-infection in male prisoners based on PCR examination in the prison. The methods used was urethral swab specimens collected from 43 asymptomatic male prisoners at the Sidrap Prison in December 2015 and then were examined using PCR method, followed by examination of mucosal IgA levels. The results indicate prevalence of CT based on PCR examination is 2.3%. Based on the examination of PCR, mucosal IgA levels in infected by CT six-fold higher than non-infectious with a mean ± SB (4.45) vs (0.77 ± 0.52) with p = 0.09. Based on the examination of mucosal IgA, the level of infected IgA is four-fold higher than non-infectious with a mean ± SB (2.48 ± 1.41) vs (0.64 ± 0.21), with p < 0.001. The combination of a positive PCR results and/or IgA positive with urethral specimen indicate infection of CT, but PCR and IgA in CT infections are not interchangeable but both constitute complementary examination.

Chlamydia trachomatis (CT) is the most common cause of sexually transmitted infections (STIs) caused by Chlamydia spp. which is an obligate intracellular bacterium that require living cells to proliferate. [1] CT infection is known as a silent disease because infected individuals are asymptomatic. If these individuals are not diagnosed and not given treatment, then they become a reservoir of the disease and will lead to long-term complications. [2] There are approximately 50% of asymtomatic CT infection of the urethra in men. Asymtomatic of CT infections in men lead to urethritis, proctitis, epididymitis, can even cause infertility. [3]

Immunoglobulin A (IgA) produced by plasma cells found in large numbers in endocervical and urethral penis. In most of the mucosal secretions, IgA concentration more than the IgG or IgM, especially on endocervical and penile urethra, but in semen and vaginal fluids dominated by IgG. [4, 5]

Diagnosis based on clinical symptoms and laboratory tests. If there is no clinical symptoms but there are risk factors, should be suspected infection C.trachomatis and laboratory tests should be performed. The criteria for the risk in question is sexual partners more than once in the past month, have sex with female sex workers in the last 1 month, experiencing one or more episodes of sexually transmitted diseases in the last 1 year and work wives or sexual partners at high risk. [4]

Chlamydia trachomatis infection in prisoners usually caused by low levels of education and risky sexual activity. The average prevalence of CT infection in males about 6.5% and women 10%. The population average age is 18-35 years. Although the average rate of incidence of infection CT small but it is very risky for the wider deployment. [6]

This study was cross sectional design, conducted at Sidrap Prison in Makassar, Indonesian, during December 2015. After receiving approval from the ethics committee on human biomedical research. We obtained 43 subjects asymptomatic male prisoners who appropriate the criteria included in this study. The criteria are male prisoners, aged starting 17-55 years old, a history of sexual intercourse less than 3 months, and willing to participate in the study by signing an informed consent form and fill out the questionnaire.

Samples were collected from urethral swab using a sterile cotton stick and inserted into a container containing 0.5 ml phosphate-buffered saline (PBS). The sample is inserted in the engine coolant at -20°C until the samples is used and then examined using PCR method, followed by mucosal IgA levels. 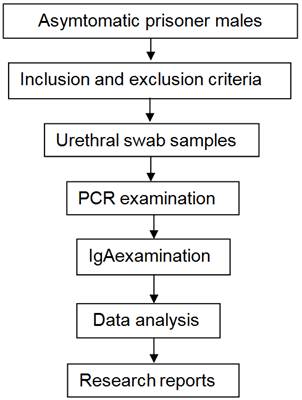 This study found a positive PCR and IgA positive in 1 sample (2.3%), the analysis based on the number of occurrences of pain using study indicator is if the person is regarded as suffering or have suffered from the occurrence of illness proportion of sample 17.69 times higher than the cut off point (COP) -3 SD (0.13). When compared to the cut-off point (COP) -2 SD (2.5%) ratio was 0.92-fold. This suggests the existence of a disease existing in a population equal to or exceeding expectations of a normal distribution as shown in Table 4. [11, 12]

There are 4 samples that showed positive antibody against CT (IgA positive), it indicates that there are 4 samples in this study who were infected by CT or the bacteria have eliminated by antibodies which also means that IgA mucosal is still detected even though the CT germs are absence. These results are consistent with the US Fresse, et al in 2010 reported the prevalence of IgA positive as much as 16.1% in the high-risk population with a negative PCR. (Table 1). Their result of sIgA in 50% of patients with positive CT on direct examination and 10.7% in patients with negative CT results significantly. The absence of local antibodies in 50% of patients with CT infection occurred because of different immunological status or associated with upper or lower genital tract infection. [13] Based on the research of Witkin SS. et al, in 1997 found 10 samples with negative PCR results but in IgA examination they found positive results. This occur possibly because of there is an obvious CT infection at that time and the immune response has not disappeared. In addition there is aCT infection in the upper genital tract that trigger the immune response. [14]