The determination of antimicrobial susceptibility pattern of a clinical isolate is very important for the effective management of infected patients. This is moreso in the light of the emergence of multidrug-resistant microorganisms. Staphylococcus aureus has the notoriety of being one of the most common organisms causing both hospital and community-acquired infections in many regions of the world. The increasing prevalence of methicillin resistance among Staphylococci is an increasing problem [1-4]. In view of the gradual depletion in the armamentarium of antimicrobial agents effective against S. aureus, there has been renewed interest in the use of the Macrolide(erythromycin, clarithromycin)-Lincosamide (clindamycin, lincomycin)-Streptogramin B (quinupristin-dalfopristin) (MLSB) antibiotics to treat S. aureus infections with clindamycin being the preferred agent due to its excellent pharmacokinetic properties [5-6]. MLSB antibiotics although structurally related, exhibit similar mode of action. They inhibit bacterial protein synthesis by binding to 23s rRNA, which is a part of large ribosomal subunit.

Resistance to macrolides (e.g. erythromycin) can occur by two different mechanisms: the efflux mechanism encoded by the gene- macrolide streptogramin resistance (msrA) and ribosome alteration or modificationmechanism due to erythromycin ribosome methylase (ermgene) [7-8].

The treatment of patients harboring MLSBi staphylococci with clindamycin leads to the development of constitutive resistance, subsequently leading to therapeutic failure [13]. In case of another mechanism of resistance mediated through msrA genes i.e. efflux of antibiotic, Staphylococcal isolates appear erythromycin-resistant and clindamycin-sensitive both in vivo and in vitro and the strain do not typically become clindamycin resistant during therapy [6].

The present study was aimed to detect inducible clindamycin resistance (MLSBi) among S. aureus isolates in our geographical setting and to study the relationship between clindamycin and methicillin-resistant S. aureus (MRSA).

2.1. Study Area and Collection of Specimens

All data were analyzed using the Chi square and t-tests. In addition, SPSS version 17.0 statistical package was employed. P-values of <0.05 were accepted as significant.

Two hundred and five (205) non-duplicate isolates of Staphylococcus aureus cultivated from different clinicalspecimens between August, 2012 and July, 2013, were used in this study. The oxacillin disc susceptibility testing showed that 25 (12.2%) out of 205 isolates of S. aureus were resistant to oxacillin (Table 1).

Forty-four (36 MSSA and 8 MRSA) of the isolates showed resistance to erythromycin (Table 2). 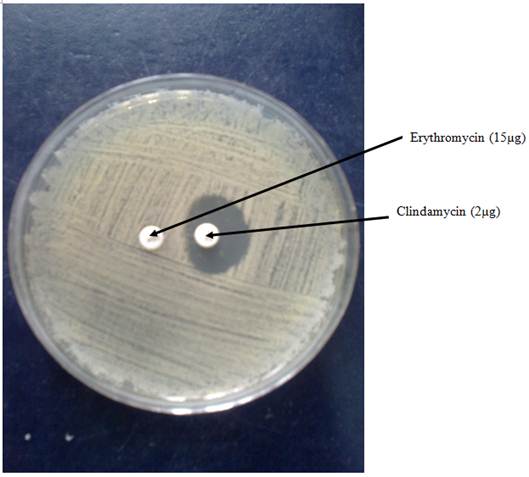 Clindamycin is indicated in the treatment of skin and soft-tissue infections, caused by staphylococcal species. It is also used as an alternative for patients who are allergic to penicillin [11]. Treatment of an infection caused by a strain carrying inducible erm gene using clindamycin or any non-inducer macrolide can lead to clinical failure [11]. In vitro routine tests for clindamycin susceptibility may fail to detect inducible clindamycin resistance due to erm genes resulting in treatment failure, thus necessitating the need to detect such resistance by a simple D test on a routine basis.

Among the 205 S. aureus isolates studied, Forty-four (21.5%) showed resistance to erythromycin (Table 2). This is higher than those reported by Ajantha et al., 2008 [17] (15.7%) but lower than 28.4% [18] and 32.4% [6]. Erythromycin is one of the commonest and affordable antimicrobial agents available locally in Nigeria. An erythromycin- resistance rate of 21.5% in this study is actually a cause for concern. Out of 38 erythromycin-resistant S. aureus that were simultaneously sensitive (phenotypically) to clindamycin in this study, 23 (60.5%) expressed inducible resistance to clindamycin (inducible MLSB phenotype) (Table 4). Overall, out of 205 isolates, inducible clindamycin resistance was observedin 23 (11.2%) of the isolates (Table 4). When compared to this study, higher rates of inducible clindamycin resistance had been reported: 50.6% [19] and 49% [17] as well as lower rate - 10.5% [18].

A survey in Pennsylvania, USA, observed that 68% of MSSA and 12.3% of MRSA were D-test positive [21]. Observations indicate that the incidence of constitutive and inducible MLSB resistance in staphylococcal isolates varies by geographic region [1].

It becomes more worrisome when 23 out of 38 erythromycin-resistant S. aureus, as indicated in this study, are inducibly resistant to clindamycin. There appears to be paucity of literatures on S. aureus resistance to clindamycin in this locality probably due to oversight or complete ignorance. The D-test is a simple and reliable method to detect inducible resistance to clindamycin and has been so recommended by the National Committee for Clinical Laboratory Standards [22] as well as other investigators [23-24]. Reporting S. aureus as susceptible to clindamycin without verifying the inducible-clindamycin resistance status may result in institution of inappropriate clindamycin therapy and the consequent treatment failure. The clinical microbiology laboratories in Nigeria should therefore consider routine testing and reporting of inducible clindamycin resistance in S. aureus. The proportion of MRSA with the inducible MLSB phenotype (3 of 4 tested) (Table 4) indicates that clindamycin may not be a therapeutic option for the treatment of an infection attributed to an inducibly resistant MRSA. If clindamycin is used for treatment of infections with MLSB-positive isolates, close follow-up and monitoring of failure or relapse is needed. However, in more severe infections, the presence of the MLSB phenotype should preclude the use of clindamycin.

Inducible clindamycin-resistance often leads to treatment failure and therefore the detection rate in this study is instructive for clinical microbiology laboratories in Nigeria to consider routine testing and reporting of inducible clindamycin resistance in S. aureus. There is also the need for sustained surveillance of antimicrobial susceptibilities of S. aureus in this region.