Abstract: Insulin resistance is a major characteristic of type 2 diabetes (T2DM). Inflammation plays an important role in increased insulin resistance, but the underlying mechanism remains unclear. Interleukin-10 (IL-10) is an anti-inflammatory cytokine with lower circulating levels in T2DM. We aimed to examine the association between IL-10 and insulin resistance, and to evaluate IL-10 gene promoter single nucleotide polymorphism (SNP) at position -592 C/A and serum IL-10 level as risk factors for insulin resistance and T2DM. This study was carried out on 200 subjects divided into 2 groups: 110 patients with T2DM (group I), and 90 healthy subjects served as controls (group II). All participants were investigated for; fasting and 2 hour post prandial blood glucose, serum lipids, glycated hemoglobin (HbA1c), serum IL-10 and fasting serum insulin. HOMA-IR was used for assessment of insulin resistance and β cell activity. Genotyping of -592 C/A (rs1800872) SNP of IL-10 gene promoter and genotype frequencies were analyzed using the polymerase chain reaction–restriction fragment length polymorphism technique (PCR-RFLP). The results of the present study showed significant statistical decrease in serum IL-10 levels in group I compared to group II. A significant negative correlation was found between serum IL-10 and HOMA-IR. Significant differences were observed for -592 C/A genotype distributions between both groups with increased frequency of the AA genotype in diabetic patients and increased frequency of CC genotype in controls. AA genotypes of -592 C/A was found to be a genetic risk factor for T2DM. Our results show that IL-10 has a positive association with insulin sensitivity, and SNP-592 C/A of IL-10 gene promoter and its serum level can contribute to susceptibility to insulin resistance and T2DM.

Diabetes mellitus is a major public health problem and the prevalence of T2DM is worldwide [1]. The frequency of diabetes mellitus is increasing and it is expected that it will affect 300 million people in 2025 [2]. It has been suggested that diabetes is an immune dependent disease in which the pattern of cytokine expression is changed [3]. Insulin resistance [IR] is a state in which a given concentration of insulin produces less than expected biological effect [4]. Both insulin resistance and decreased insulin secretion are major features of the pathophysiology of type 2 diabetes [5,6,7].

Insulin resistance most often precedes the onset of type 2 diabetes by many years, It is clear that insulin resistance has a genetic component and acquired factors, such as obesity and sedentary lifestyle [5]. Initially, insulin resistance is compensated by hyperinsulinemia, through which normal glucose tolerance is preserved. At least 25% of non-diabetic individuals’ exhibit insulin resistance that is falls in the same range of that seen in patients with type 2 diabetes. Deterioration into impaired glucose tolerance occurs when either the insulin resistance increases or the compensatory insulin secretory responses decrease, or when both occur. β-cells are responsible for sensing and secreting the appropriate amount of insulin in response to a glucose stimulus [8], its dysfunction is the result of prolonged exposure to high glucose, elevated FFA levels, or a combination of the two. There is considerable evidence that chronic hyperglycemia in patients with type 2 diabetes contributes to impaired β-cell function [9].

Several studies have reported that multiple cytokines may be involved in the regulation of the immune response but little is known about the associations between insulin action and anti-inflammatory cytokines, which may play a role in the pathogenesis of T2DM [10, 11]. Interleukins are a diverse constellation of small cell signaling protein molecules, or cytokines, that regulate the function of the immune system in humans [12, 13]. Interleukins are produced predominantly by T cells, monocytes, macrophages and endothelial cells [14]. Their functions include facilitating communications among immune cells, controlling genes, regulating transcription factors, and governing inflammation, differentiation, proliferation and the secretion of antibodies [15]. Some studies provided evidence that IL-10 might exert some beneficial metabolic effects. So far, no data are available regarding an association between circulating IL-10 and insulin action in humans [16, 17].

Genetic polymorphisms of interleukins play a critical role in their activity, and could alter cytokine function and dysregulate their expression [18]. Therefore, individual genetic differences may be closely related to the development of T2DM. IL-10 is a multifunctional regulatory cytokine involved in the inflammatory response that functions as a general inhibitor of the proliferative and cytokine response of both type 1 and type 2 helper T cells [19]. The gene encoding IL-10 is located on chromosome 1 [1q31–1q32] [20, 21]. Some previous studies reported that these IL-10 gene promoter polymorphisms were associated with the risk of T2DM [22, 23].

Three functional promoter single nucleotide polymorphisms [SNPs] in the IL-10 locus at –1082G/A (rs1800896), – 819 T/C (rs1800871) and –592 A/C (rs1800872) from the transcriptional start site have been confirmed, and there are indications that they influence IL-10 gene transcription [24]. In the current study we aimed to evaluate IL-10 gene promoter single nucleotide polymorphism (SNP) at position -592 C/A as well as serum IL-10 level as risk factors for insulin resistance and T2DM.

This case–control study included 200 subjects: 110 patients with T2DM [58 males and 52 females]. The diagnosis was based on the American Diabetes Association (ADA) criteria [25] and 90 unrelated healthy, age- and sex-matched subjects as a control group [51 males and 39 females]. Cases were selected from the Internal Medicine Outpatient Clinic, Menoufia University Hospital, Egypt during the period between August 2014 and December 2014.

All studied subjects were subjected to complete history taking, physical examination including anthropometric measurements. Weight was measured in kilograms with light clothes and height in meters without shoes. Waist circumference in centimeters was determined at the level of the umbilicus using a steel tape measure [26]. Estimation of body mass index [BMI] was done by dividing body weight in kilograms by (height in meter2) [27].

Prior to the collection of samples, written consent forms (approved by the Committee of Human Rights in Research at Menoufia University) were obtained from all studied cases and control subjects.

- After 12 hours overnight fasting, 10 ml of venous blood were withdrawn from every subject by sterile vein-puncture and divided into three tubes.

1- 4 ml of blood were transferred into two EDTA tubes: one of them was used for quantitative colorimetric determination of glycated hemoglobin as percent of total hemoglobin using kits supplied by Teco diagnostics, USA [29], the other EDTA tube was preserved in -20 for DNA extraction and further molecular analysis.

The amplification products were separated by electrophoresis through 3% agarose gel stained with and visualized ethidium bromide with positive band at 412 bp. 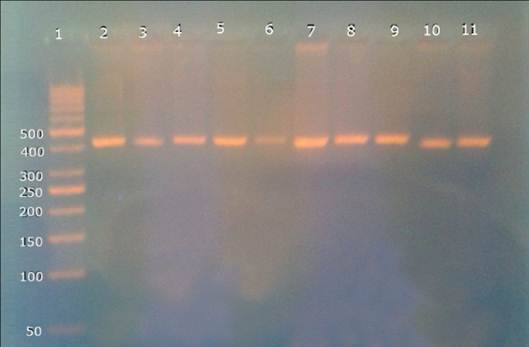 * The IL-10 – 592 C/A polymorphism using the restriction fragment length polymorphism (the RFLP) technique: 10 ul of the PCR products for the IL-10 were mixed with 1 ul [1 unit] of FastDigest® Rsa1 restriction enzyme (provided by Fermentas) with 6.5 μl nuclease-free water and 2.5 of 10X FastDigest® Buffer. 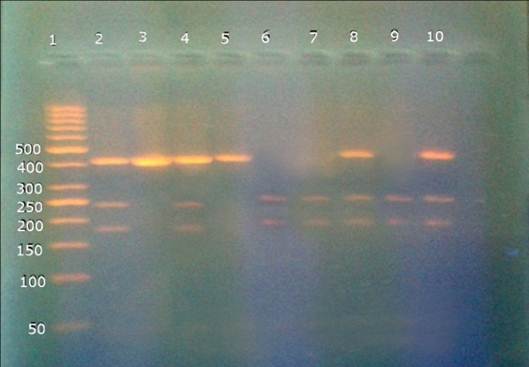 The mixture was good mixed and incubated for at 37 ºC for 2 hrs then 10μl of the products was loaded into a 3% agarose gel containing ethidium bromide for electrophoresis. The uncut fragment was 412 bp and digestion products were 236 bp and 176 bp.

Results were collected, tabulated and statistically analyzed by IBM personal computer and statistical package SPSS version 20. Chi-square test [χ2]: was used to study association between two qualitative variables. Odds ratio, describe the probability that people who are exposed to a certain factor will have a disease compared to people who are not exposed to the factor. Student t-test used for comparison between two groups having quantitative variables. U test (Mann whittney) comparison between patients and control for continuous variables not normally distributed. Pearson’s correlation coefficient, r, was used to assess the relationship between serum IL-10 and insulin resistance in diabetic patients. Multiple regression analysis calculates the effects of risk factors as independent Odds ratios with the effects of other confounders removed. P-value < 0.05 was considered statistically significant.

This study was conducted on a total number of 200 subjects divided into two groups as follows; 110 patients with T2DM as group I and 90 healthy persons as group II. The baseline characterestics of both groups are shown in Table 1. There were no significant statistical differences between the two studied groups as regards age and gender distributions. There was a significant statistical increase of SBP, DBP, waist circumference and BMI in group I (diabetic patients) when compared to group II (control) (p<0.05). There was a significant increase of fasting and 2 hours post prandial blood glucose, glycated Hb, LDLc, TC, TG, fasting insulin and HOMA-IR in group I when compared with group II (p<0.05). On the other hand, there was a significant decrease in HDLc, insulin sensitivity, β cell activity and serum IL-10 levels in group I when compared with group II (p<0.05).

In group I, we compared the three different genotypes (AA, CA and CC) regarding serum IL-10 and insulin resistance assessed by HOMA-IR. Statistically significant differences were found between the three genotypes with the highest serum IL-10 and the least HOMA-IR levels in CC genotype (p<0.05). On the other hand the least serum IL-10 and the highest HOMA-IR levels were found in AA genotype (p<0.05) (Table 3) and (Figures 2 and 3). In post hoc analysis, subjects homozygous for the A allele (A/A) showed significantly increased HOMA-IR and decreased IL-10 levels compared with homozygous (C/C) and heterozygous (C/A) carriers of the C allele (p<0.05). On the other hand, a significant statistical difference was observed between subjects carrying the -592C/A genotype and those carrying the -592C/C genotype regarding HOMA-IR (p<0.05) but not IL-10 (Table 3). 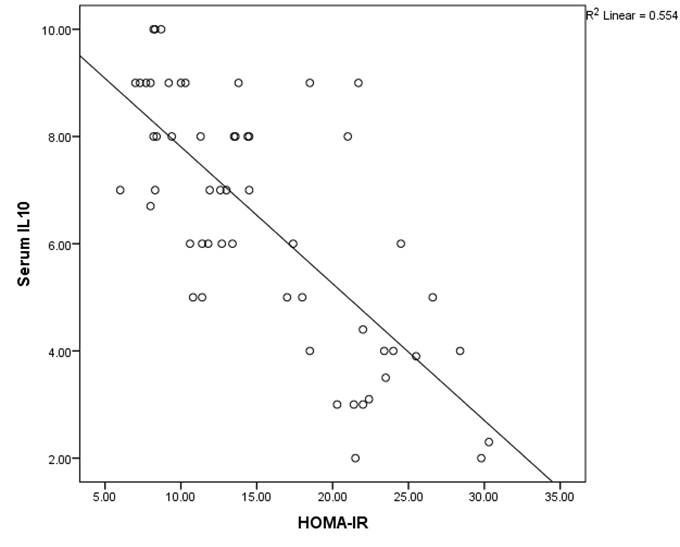 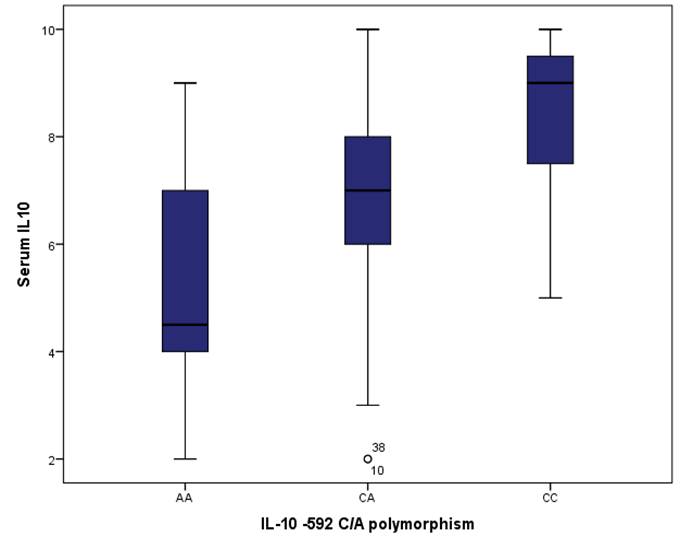 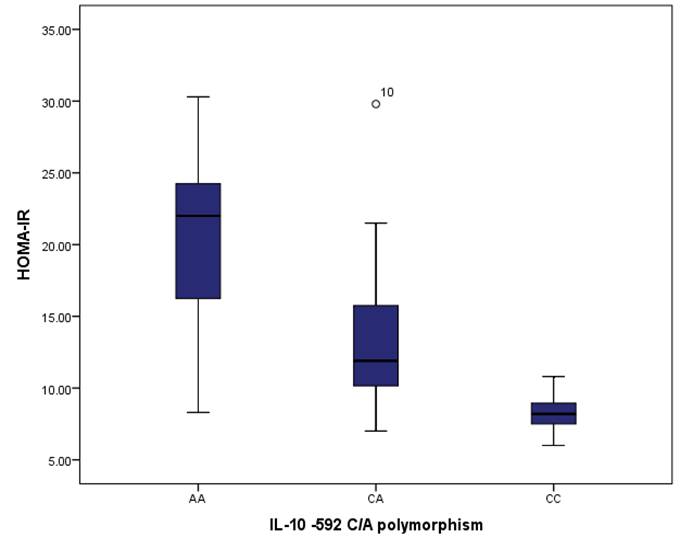 Type 2 diabetes mellitus is a common chronic disease, and its complications have become a major cause of morbidity, mortality and disability in both developed and developing countries [2]. Increasing evidence suggests a link between a chronic low-grade inflammatory state and the development of obesity and the coexisting conditions of insulin resistance, T2DM and the metabolic syndrome [38]. The aim of this work was to evaluate IL-10 gene promoter single nucleotide polymorphism [SNP] at position -592 C/A and serum IL-10 level as risk factors for insulin resistance and T2DM.

In the present study, there was a significant increase of fasting and 2 hours post prandial blood glucose, glycated Hb, LDLc, TC, TG, fasting insulin and HOMA-IR in group I (patients with T2DM) when compared with group II. On the other hand, there was a significant decrease in HDLc, insulin sensitivity, β cell activity and serum IL-10 levels in group I when compared with group II.

Interleukin 10 is an important immunoregulatory cytokine that plays an important role in stimulating and suppressing the immune response, and functions as an immune response modulator [43,44]. The association of low interleukin IL-10 production capacity with the metabolic syndrome and T2DM was established. It has been reported that co-treatment with IL-10 prevented IL-6 induced defects in both hepatic and skeletal muscle insulin action in rats [46]. In addition, daily subcutaneous administration of IL-10, a known potent inhibitor of IFN-γ production by TH1 T cells, to 9 and 10-week-old non-obese diabetic (NOD) mouse was shown to delay the onset of disease and significantly reduce the incidence of diabetes [47].

Approximately 75% of the variation in IL-10 secretion capacity in humans derives from genetic factors that contribute to disease susceptibility [45]. Previous studies have documented that genetic polymorphisms of interleukins play a critical role in their activity, and could alter cytokine function and dysregulate their expression [49]. Therefore, individual genetic differences may be closely related to the development of T2DM [50]. In the current study we aimed to evaluate IL-10 gene promoter single nucleotide polymorphism (SNP) at position -592 C/A as a risk factor for insulin resistance and T2DM.

We demonstrated that the carriers of the −592A/A genotype have lower levels of circulating IL-10 levels compared with other two genotypes suggesting that these allele combinations may affect IL10 transcription. On the other hand, no differences were observed between subjects carrying the -592C/A genotype and those carrying the 592C/C genotype regarding serum IL-10 levels, thus suggesting a recessive effect of the A allele. Scarpelli and colleagues were demonstrated similar findings but in normal persons and not in diabetics [39].

Based on the previous results, we demonstrated that serum IL-10 has a significant positive association with insulin sensitivity, and that the AA genotype of the IL-10 gene promoter as well as low serum IL-10 levels might be considered as genetic risk factors for insulin resistance and type 2 diabetes mellitus.