Abstract: The purpose of this study was to investigate the anti-inflammatory effect of topical aloe vera on COX-2 and histamine expression in mice skin exposed to UVB. COX-2 and histamine expression were examined by using immunochemistry staining in skin samples from totally 20 Swiss Albino mice in the control group, UVB group, UVB+Ethanol group, UVB+Aloe group. The study show topical application of aloe vera with a concentration of 200 mg/kg body weight suppress expression of COX-2 in mice skin exposed to UVB, however it have not been proven to reduce histamine expression. Aloe vera with a dose of 200mg/kg body weight has show anti-inflammatory effects by reduction COX-2 expression that assessed 24 hours after the last treatment.

Ultraviolet light is mainly consist of UVB (290-320 nm) and UVA (320-400 nm) rays. UVA is less erythemogenic, but the amount UVA that reach the earth surface 100 times more abundant than UVB. Both of the UV exposure contribute to photodamage and skin cancer development. [1, 2] The responses of skin to UV injury consist of erythema, increased proliferation and differentiation of keratinocytes, inflammation, and increased production of cytokines. UV induced keratinocytes damage also cause apoptosis of basal keratinocytes that related with the formation of ''sunburn cells''. [3, 4]

Ultraviolet radiation also triggers the release of prostaglandins in the skin. [5, 6] Prostaglandins are important mediators in many biological processes, including inflammation, angiogenesis, and platelet aggregation. [7] Prostaglandin E2 (PGE2) is a major prostaglandin produced in human skin keratinocytes, that regulate normal keratinocyte proliferation and differentiation. [6, 8]

Cyclooxygenase enzyme (COX) is the main enzyme in the cascade that converts arachidonic acid to prostaglandin (PGs) and thromboxane (Tx). Two isoforms of COX are the constitutive form (COX-1) and the inducible form (COX-2). COX-1 is a protein that present in almost all types of cell types, including keratinocytes. It appears to be responsible for the physiological concentrations of prostaglandin that required in maintaining tissue homeostasis. [7, 9] In contrast, COX-2 is induced in many tissues, including epidermis, in response to injury, inflammation, and / or cell activation by various agonists, such as cytokines and growth factors. [10]

Mast cells are tissue resident cells, possessed with secretory granules. They are located in association with blood vessels and at epithelial surface, such as the skin and mucosa. Mast cells have long been recognized for its role in the genesis and modulation of innate inflammatory response. In degranulation process, mast cells will release histamine which produce a gap between adjacent endothelial cells. This increases vascular permeability to macromolecule in serum, although this does not necessarily lead to the migration of inflammatory cells into perivascular space. Mast cells also contain heparin which have affect to angiogenesis. [11]

Aloe genus is a member of asphodelaceae family, subfamily alooideae. It consists of about 420 species of succulent plants. Hailing from southern and eastern Africa and Madagascar, it has been introduced in other tropical countries, Mediterranean region and the West Indies. Aloe vera has been used as a folk remedy for 3000 years and in the last decade, it is widely used in health drinks, a topical cream, toiletries and cosmetics. From the leaves of aloe vera, three types of commercial products which is obtained such as dried exudates, released from aloin cells within the vascular bundles zone; gel, which is a musilaginous juice that located in the center of the leaf; and oil, which is extracted with organic solvent. The dried exudate is used to provide a bitter taste in alcoholic beverages, and the oil are used primarily in the cosmetics industry. Previous study has shown that the components of the gel has anti-inflammatory activity through antibradikinine activity and the inhibition of prostaglandin production. [12] This is in line with research conducted by Devaraj and Karpagam (2011), which examine the activity of aloe vera extract in rats with full-thickness burns in other study at a concentration of 200 mg/kg. [13] In other study, it showed a decrease edema formation induced by carrageenan and formaldehyde as well as a decrease in granuloma formation. Therefore, based on the research that has been there before this, this research we use aloe vera extract with a concentration of 200 mg/kg.

In this present study we use a UVB (290-320 nm) exposure to induce inflammation in mice skin. The purpose of this study to evaluate the effect of topical anti-inflammatory aloe vera on the expression of COX-2 and histamine in the skin of mice by exposed to UVB.

This research is true experimental post-test design with control group. This study was conducted in animal laboratory of Hasanuddin University, Immunohistochemistry examination were conducted at the Pathology Laboratory, Makassar.

Aloe vera gel preparation: plant leaves of Aloe vera were obtained from Makassar, South Sulawesi, Indonesia and processed in Laboratory of Pharmacy UNHAS. After washing, the gel was extracted by an incision in the plant leaves which then washed in ethanol 96% for 3 days.

Statistical analysis: all statistical data analysis were carried out using SPSS 17.0. Data were presented by using ANOVA test. The scoring system was evaluated by Mann – Whitney U test. The differences were considered significant when probability (P) was less than 0.05.

The anti-inflammatory effects of topical aloe vera with a concentration of 200 mg/kg on the expression of COX-2 can be seen in Table 1 as follows: 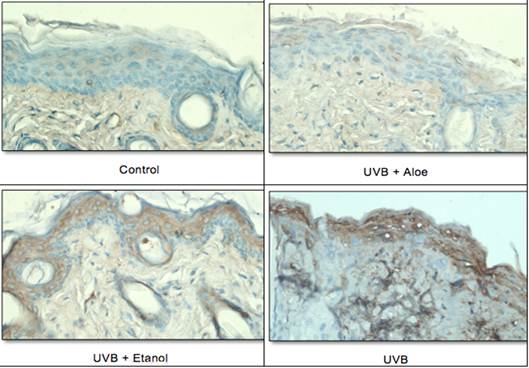 The effects of topical aloe vera on the histamine expression at a concentration of 200 mg / kg can be seen in Table 2.

Cyclooxygenase (COX) is an enzyme that catalyzes the conversion of arachidonic to prostaglandin. Prostaglandin play an important role in many biological processes, including inflammation. [14]

This study shows the expression of COX-2 was higher in UVB group than other groups. This suggests that UVB exposure induced inflammatory process in the skin by increasing synthesis of prostaglandin which represented by the increase of COX-2 expression.

It appears that the expression of COX-2 were the lowest in the UVB + Aloe group. It reflect that the topical aloe vera when is applied daily to the skin of mice for three consecutive days, shortly after UVB exposure has anti-inflammatory effects by suppressing the COX-2 expression. This is in line with the result of previous study. In this study, the effects of anti-inflammatory activity and analgesic aloe vera extract in mice were shown by decrease edema formation induced by carrageenan and formaldehyde as well as a decrease in granuloma formation. [13] Other studies has demonstrated that the effects of topical aloe vera were decrease expression of inflammatory mediators thus significantly decrease inflammation and the formation of granulation tissue which resulting in faster wound healing process. [15] Anti-inflammatory effect of which is owned by aloe vera has also been proved by Sarkar D et al, (2005) on albino Wistar rats and Swiss albino mice. Acute anti-inflammatory activity of aloe vera was evaluated by using carrageenan and dextran as an agent flogistic while the chronic anti-inflammatory effects evaluate by inducing chronic arthritis. The degree of inflammation measured using pletismografic. Effect of aloe vera on nitric oxide in rat peritoneal macrophages was measured with Griess reagent. The results of this study indicate anti-inflammatory activity of acute and chronic owned by aloe vera is partly mediated through a reduction in the production of nitric oxide, which in turn prevents the release of inflammatory mediators. [12]

On human skin, histamine is produced and released by mast cells in dermis and keratinocytes. Increased of histamine released that caused by exposure to UVB has been reported. [17]

The results which is obtained in this study have not been able to statistically prove the ability of topical aloe vera in suppressing the expression of histamine. This may due to the method that used to evaluate histamine expression in this study are less precise. In immunohistochemistry method, histamine on mice skin tissue samples both located in granules or those has been release from granule were stained. To evaluate the anti-inflammatory effects of topical aloe vera on the histamine expression, it might be better to examine the histamine that has been released from the granule mast cells. Therefore immunohistochemistry research methods less suitable for use in this study.

Another factors that might contribute is both of mediator that used to assess the anti-inflammatory effects of topical aloe vera have a different release time. COX-2 is more likely to play a role in the chronic phase of the inflammation process, while histamine tend to work at the acute phase of an inflammatory process. It is required to give UVB exposure to assess the expression of histamine.

From this study we can conclude aloe vera with a dose of 200mg/kg body weight has show anti-inflammatory effects by reduction COX-2 expression that assessed 24 hours after the last treatment.