The goals of using plants as sources of therapeutic agents are to isolate bioactive compounds for direct use as drugs. Eg: taxol, digitoxin, morphine, digoxin, vinblastine & vincristine as well as reserpine, produce bioactive compounds of novel or known structures as lead compounds for semisynthesis to produce patentable entities of higher activity and/or lower toxicity.eg: taxotere, teniposide etc1. Mussaenda roxburghii hook. Belongs to rubiaceae; is a perennial shrub grows in the foothills and moist areas of valley. Roots are traditionally used in treatment of cuts, jaundice, wounds, boils and skin diseases etc2,3. Leaves are used in the ailments of bone fracture4. The paste obtained from leaf of this plant is applied to treat boils5. Previous phytochemical investigation led to isolation of a new iridoid, shanzhiol which showed mild antibacterial activity against both staphylococcus aureus and escherichia coli with a mic of 100 μg/ml by the broth dilution method 6. As part of our ongoing research with medicinal plant of bangladesh 9,10 the present study has been undertaken to evaluate the preliminary cytotoxicity and antimicrobial activity of m. Roxburghii as well as to find out logical evidence for its folk uses and for discovery of new drug candidates.

The leaves of mussaenda roxburghii were collected from chittagong, bangladesh, in november 2013. A voucher specimen for this plant has been maintained in bangladesh national herbarium, dhaka, bangladesh (accession no. Mfk137. Ctg uh). The sun dried and powdered (500 gm) leaves of p. Cereifera was macerated in 2.5 l of methanol for 7 days and then filtered through a cotton plug followed by whatman filter paper number 1. All extracts were concentrated with a rotary evaporator at reduced pressure and low temperature (40-45ºc). The concentrated methanolic extracts (me) were partitioned by modified kupchan method [7] and described by md. Reyad-ul-ferdous9 the resultant partitionates which are pet-ether (pesf), chloroform (csf), carbon tetrachloride (ctcsf), and aqueous (aqsf) soluble fractions were used for the experimental processes.

Inhibition of albumin denaturation was conducted for evaluation of ex-vivo anti-inflammatory activity. The present study was developed by certain modification of the method claimed by mizushima y and kobayashi m 8 on the basis of in-vitro determination of the protein maturation caused by the control group and comparing it with the positive and test groups. The more the inflammatory action, the more it will cause the protein maturation and the measured absorbance will be higher. The reaction mixture was consisting of test extracts at different concentrations and 1% aqueous solution of bovine albumin fraction. Reaction mixture ph was adjusted using small amount of 1n hcl. Aspirin was taken as standard drug. The samples were incubated at 37oc for 20 min and then heated at 57oc for 30 min. After cooling the samples, the turbidity was measured spectrophotometrically at 660 nm. The experiment was performed in triplicate. % inhibition of protein denaturation was calculated as follows: percentage inhibition = (abs control – abs sample)/abs control× 100

The cardio-protective activity was evaluated by thrombolytic activity assy. The thrombolytic activity of all extracts was evaluated by the method describe by daginawala 11 and modified by kawsar 112 using streptokinase (sk) as the standard as well as described by reyad-ul-ferdous m 9. 0.1 gm extract was suspended in 10ml distilled water and the suspension was shaken vigorously on a vortex mixer. The suspension was kept overnight and decanted to remove the soluble supernatant, by using a filter. 100 μl of this aqueous preparation of herbs was added to the alpine tubes containing the clots to check the thrombolytic activity. 10 alpine tubes were taken and each eppendrof tube containing clot was properly labeled and venous blood drawn from the healthy volunteers. That was transferred in 10 different pre weighed sterile alpine tube (0.5 ml /tube) and incubated at 37oc for 45 minutes. Aspirated washout without disturbing the clot formed. Water was also added to one of the tubes containing clot and this serves as a negative thrombolytic control. All the tubes are than incubated at 37oc for 90 minutes and observed for clot lysis. After incubation, fluid obtained was removed and tubes were again weighed to observe the difference in weight after clot disruption. Difference obtained in weight taken before and after clot lysis was expressed as percentage of clot lysis. Percentage of clot lysis was determined from below formula.

One gram of the methanol extract of mussaenda roxburghii was dissolved in 100 ml of methanol and was subjected to preliminary phytochemical screenings for determining nature of phytoconstituents 13-15. A small portion of the dry extract was used for the phytochemical tests for compounds which includes carbohydrate, tannins, flavonoids, alkaloids, saponins, steroids, resins, and glycoside in accordance with the methods of with little modifications. All test procedure for chemical groups described16. We identified several compound in table-9.

(i). Test for Carbohydrate

2ml of an aqueous extract of the plant material in a test tube have to take + then have to add 2 drops of freshly prepared molisch’s reagent + mixed thoroughly + allowed 2 ml of conc. Sulphuric acid to flow down the side of the inclined test tube. So that acid forms a layer beneath the aqueous solution. A red or reddish violet ring will form at the junction of the 2 layers. On standing or shakeing a dark purple solution will form. After diluted with 5 ml of water a dull violet precipitate will form.

0.5 ml of an aqueous extracts of the plant material + added 5 ml of benedicts solution + boil for 5 minutes and allow cooling spontaneously. A red precipitate of cuprous oxide is formed in the presence of a reducing sugar.

2 ml of an aqueous extract of the plant material + add 1 ml of a mixture of equal volume of fehling’s solutions a& b. Boil for a few minutes. A red or brick red precipitate is formed if a reducing sugar is present.

The experimental results were expressed as the mean ± standard deviation (sd). Statistical significance of the mean mortality at each concentration was analyzed using one-way analysis of variance (anova) and compared using duncan’s multiple range tests. Values of p≤0.05 were taken to be statistically significant.

The result obtained in the present investigation phytochemicals screening of the methanol extract of leaves of m. Roxburghii revealed that the crude extract contained flavonoids, saponins, steroids, tannins and triterpinoids, terpinoids, cardiac glycosides and anthraquinones (table-1). M. Roxburghii leaves can also have various medicinal values such as anti-inflammatory, membrane stabilizing and thrombolytic activity. The presence of flavonoids exhibit significance anticancer, cardioprotective, anti-microbial activity may demonstrate gram-positive, gram-negative as well as fungi also. Among of the microorganisms are resistance to several drugseach though, this is only a preliminary study of the occurrence of certain properties of m. Roxburghii leaves an in-depth study will provide a good concerted base of all the phytochemicals and several pharmacological functions mention above. 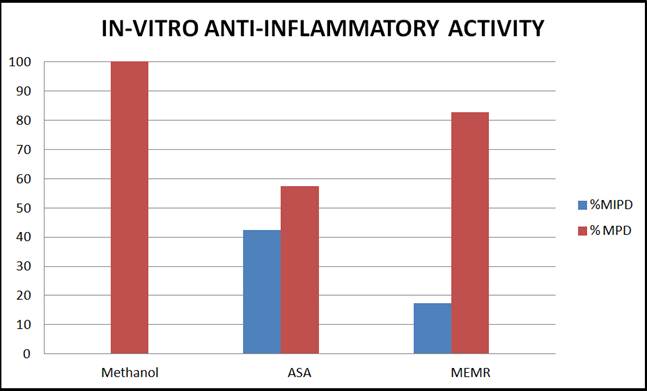 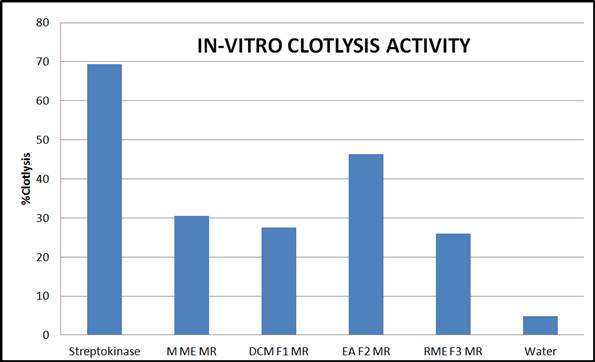 In the present study, we have found that most of the biologically active phytochemicals were present in the methanolic extract of m. Roxburghii leaves. This is only a preliminary study and to make final comment the extract should thoroughly investigated phytochemically and pharmacologically to exploit their medicinal and pharmaceutical potentialities.

We are acknowledge to north south university and progati medical institute for provide us required facilities to complete this work.