Amaranthus viridis L. (Family Amaranthaceae) is distributed in the warmer parts of the world .In addition the whole plant possesses analgesic and anti-pyretic properties and is used for the treatment of pain and fever respectively in traditional systems of medicine [1]. A. viridis is possibly of Asian origin but now a cosmopolitan weed in the tropical and subtropical regions of the world, also ubiquitous faraway to temperate regions (e.g. in Europe, North America, Asia and Australia). In equatorial Africa it is also a profound and common weed. It is occasionally cultivated (e.g. in Nigeria, Gabon and DR Congo) [2]. A. viridis Linn. Is Erect or ascending annual or short-lived perennial herb up to 1 m tall; glabrous, angular, bear branches, stem slender to sparsely pubescent in upper part with multicellular hairs. It is consists of alternate leaves with petiole which can be up to 10 cm long; blade deltoid-ovate to rhomboid-oblong, 2–8 cm × 1.5–6 cm, margin sometimes sinuate , apex emarginate with small mucro, , base shortly cuneate, glabrous to pubescent. It also consists of axillary or mostly terminal spikes, frequently paniculated, agglomerated cymes arranged in slender, up to 12 cm long, in the lower part of the stem often in proliferated axillary clusters 7 mm in diameter. Flowers are subsessile, green in colour, unisexual, bracts and bracteoles lanceolate-ovate, male and female intermixed but female ones more numerous in 1 mm long, oblong to obovate in 1–1.5 mm long, whitish-membranous; tepals male flowers with 3 stamens; female flowers with superior, midrib often thickened above, bent along the fruit. Fruit of a subglobose capsule, c. 1.5 mm in diameter, not or slightly exceeding the perianth, usually strongly wrinkled, indehiscent,1 seeded Seed sub globose ,slightly compressed, c.1mm in diameter, glossy black, margin acute, verrucose or with inconspicuous structure. Epigeal germination is seen in seedlings, cotyledons lanceolate, c.12 mm × 2.5 mm [2]. Leaves directly used to eczema, psoriasis and rashes etc [3]. Other traditional uses range from an anti-inflammatory agent of the urinary tract, diuretic, venereal diseases vermifuge, analgesic, anti-rheumatic, antiulcer, antiemetic, improvement of appetite, laxative, anti lep-rotic, treatment of respiratory, eye problems and treatment of asthma [4,5]. Furthermore, the plant possesses anti proliferative and antifungal lactin properties as well as ribosome inactivating protein, ß-carotene [6,7] and antiviral activities [8]. However, there is not enough scientific reports to sup-port these supposed analgesic and antipyretic activities. This has initiated step to conduct the studies to ascertain the authenticity of these important claims of traditional potency [9].

2. Pharmacological Activities and Medicinal Uses of A. viridis

A. viridis L (Amaranthaceae) is commonly used the India and Nepal to lessen labor pains and as an antipyretic (Kirithikar and Basu, 1986; Mark Turin, 2003). The Negritos of the Philippines apply the bruised leaves directly to eczema, psoriasis and rashes (Eduardo and Quisumbing, 1951). Other traditional uses are as an anti-inflammatory agent of the urinary tract, in venereal diseases, as a vermifuge, diuretic, antirheumatic, antiulcer, analgesic, antiemetic; laxative, for improving appetite, as an antileprotic, for the treatment of respiratory problems, eye treatment and for asthma (Anonymous, 1988; Agra et al., 2007; 2008; Kirithikar and Basu, 1986; Hassan Sher and Khan, 2006; Quershi et al., 2008; Muhammad Arshad, 2000; Muhammad Ejaz Ul Islam Dar, 2003; Muhammad and Amusa, 2005) A novel antiproliferative and antifungal lactin and a ribosome inactivating protein, β-carotene, were isolated from A. viridis (Kaur et al., 2006; Kwon et al., 1997; Sena et al., 1998) and it also possesses antiviral activity (Obi et al., 2006). The whole of the A. viridis plant is used for the treatment of pain and fever in traditional medicine. However, there is insufficient scientific proof regarding the analgesic and antipyretic activity of A. viridis, so our aim is to provide scientific validation for traditional uses [9].

Plants are used as antipyretic and anti-nociceptive by the following ways of methanolic extract of whole plant of A. viridis L (MEAV), was screened for anti-nociceptive activity using acetic acid induced hot plate test, writhing test and tail immersion test in mice. A screening exercise was carried out to determine the antipyretic potential of the extract using yeast induced pyrexia method in rats. The extract was administered to both laboratory animals at the doses of 200 and 400 mg/kg body weight, respectively. The statistical analysis demonstrate that MEAV had significant (p<0.01) dose dependent antinociceptive and antipyretic properties at 200 and 400 mg/kg. Therefore, current study discloses the antinociceptive and antipyretic activities of methanolic extract of A. viridis [9].

4. Antioxidant and Antimicrobial Activities of A. viridis

The present study was conducted to evaluate the phenolics, antimicrobial and antioxidant properties of leaf and seed extracts from an edible herb namely A. viridis L. The extract yields of active components, produced using aqueous and pure methanol, from the seeds and leaves ranged from 2.4 to 3.7% and 5.4 to 6.0%, respectively. The extracts posses significant levels of total phenolic contents (1.03 to 3.64 GAE, g/100 g) and total flavonoid contents (18.4 – 5.42 QE, g/100 g) and also exhibited good 1, 1-diphenyl-2-picrylhydrazyl (DPPH) radical scavenging activity as revealed by IC50 (14.25 - 83.43 μg/ml). Besides, the tested extracts showed considerable antimicrobial activity against selected bacterial and fungal strains with minimum inhibitory concentrations (MIC) ranging from 179-645 μg/ml. Amongst the plant parts tested and the seed extracts exhibited superior antioxidant and antimicrobial activity. In conclusion, A. viridis leaf and seed can be explored as a potential source for isolation of antioxidant and antimicrobial agents for uses in functional food and pharmaceuticals [10,11,12].

5. Hepatoprotective Activity of A. viridis

6. Anti-inflammatory Effects of A. viridis

The present study was carried out to investigate the anti-inflammatory property of petroleum ether, alcoholic and aqueous extracts of A. viridis Linn leaves using experimental animal models (Male albino rats, weighing 150-200g). The Anti-inflammatory activity of the various extracts was studied based on their effects on carrageen an-induced paw oedema and cotton pellet glaucoma in rats. The extracts in dose levels of 50,100 and 200 mg/kg orally applied for anti-inflammatory studies. The aqueous and ethanol extracts of leaves of trianthema portulacastrum significant (P<0.05) anti-inflammatory activities in a dose-dependent manner to that of standard drug indomethacin, where as petroleum ether extract exhibit minimum inhibitory effect in carageenan induced hind paw oedema and cotton pellet granuloma in rats. All the doses were applied relative to the control group. The crude leaf extracts demonstrate of A. viridis possess potent anti-inflammatory by supporting the folkloric usage of the plant to treat various inflammatory conditions [13].

7. Antihelmintic Activity of A. viridis

According to the WHO, only a few drugs are used in treatment of helminthes in humans. Anthelmintics from plant resources play a key role in the treatment of these parasite infections. In view of this, attempts have been made to study the anthelmintic activity of traditional medicinal plants. The three plants presented in this study are Amaranthus viridis L., Amaranthus spinosus and Amaranthus caudatus. They belong to the Amaranthaceae family and are traditionally used as vermicides. Our aim was to investigate the anthelmintic activity of the three plants using earthworms (Pheretima posthuma). Methanol extracts of the three plants at different concentrations (10, 20, 40, 60, 80, 100 mg/ml) showed dose-dependent vermicidal activities. At concentrations of 80 and 100 mg/ml all three plant extracts caused paralysis (8.18, 5, 12.16, 5.75, 10.2, 7.8 min) and death (14.65, 9.12, 18.6, 8.5, 18.6, 12.7 min), respectively. Piperazine was applied as a reference standard at a concentration of 10 mg/ml. Our study found that the three plants possess potent anthelmintic activity when compared to Piperazine [14].

8. Antifungal Activity of A. viridis

The plants have investigated in the search for new substances against microorganisms resistant to current pesticides and antibiotics. They are evaluate the existence of antiphytopathogenic properties of organic extracts from the leaves of amaranth (A. viridis L.), Amaranthaceae, popularly known as caruru. The hexanic , dichloromethanic , ethylic acetate and ethanolic extracts were obtained, respectively with yields of 2.2, 2.4, 3.2 and 3.6% (m/m). These extracts were used to determine the Minimum Inhibitory Concentration (MIC), through dilution technique using 96 well microplate. After investigating the CIM in wells where no fungal growth was detected, the Minimum Fungicidal Concentration (MFC) was determined on plates containing dextrose Sabouraud agar. The experimental crude extracts of Amaranthus indicate activity against the fungi Colletotrichum musae (Berk. and Curt.) Arx, causing anthracnose of banana and against Fusarium solani f. sp. piperis responsible for fusariosis in black pepper. In comparison to Colletotrichum musae extracts obtained with ethyl acetate, dichloromethane and ethanol, the MIC differ from 15.6-250.0 μg mL-1. The ethylic acetate, hexanic and ethanolic extracts showed activity against Fusarium solani with MIC limited from 31.2-250.0 μg mL-1. In this research, it was showed the presence of antifungal constituents in extracts of A. viridis L., revealing its potential antimicrobial effect against these two phytopathogenic strains tested [15].

9. Antihyperglycemic and Hypolipidemic Activity of A. viridis

To investigate the hypolipidemic and antihyperglycemic effects of methanolic extract of leaves of A. viridis (MEAV) in normal and Streptozotocin (STZ) induced diabetic rats. The activities of methanol extract of leaves of A. viridis was evaluated by using normal and STZ induced diabetic rats at dose of 200 mg/kg and 400 mg/kg by mouth per day for 21 days. Body weight and blood glucose levels were monitored at specific intervals, and different biochemical parameters such as serum triglyceride, serum cholesterol high density lipoprotein, and low density lipoprotein were assessed. Very low density lipoprotein, were also evaluated in the experimental animals. Histology of pancreas was performed. The statistical data demonstrated a significant increase in the body weight, decrease in the serum triglycerides, total cholesterol and blood glucose after treatment with MEAV. High density lipoprotein (HDL) cholesterol level was significantly increased when treated with extract. In histological study, focal necrosis was found in the diabetic rat pancreas; however, was less profound in treated groups. The MEAV has advantageous impact in reducing the elevated blood glucose level and body weight changes, and in STZ induced rats, the lipid profile is improved.

According to the International Diabetes federation (IDF), at present Type-2 diabetes affects 246 million people worldwide and is expected to increase to 380 million by 2025. Metabolic syndrome is a amalgamation of various disorders, including reduced glucose tolerance, abdominal obesity, high cholesterol and high blood pressure which enhance the risk of diabetes and cardiovascular disease.

Recent studies have demonstrated a variety of important literature indicates that there is no scientific evidence to support the antihyperglycemic and hypolipidemic effects of A. viridis. The present study investigates the action of methanolic extract of A.viridis (MEVA) in the different models of rats to ascertain the scientific basis for the use of this plant in the treatment of diabetes and hyperlipidemia [16].

10. Antioxidant, Antihyperlipidemic and Antidiabetic Activities of A. viridis 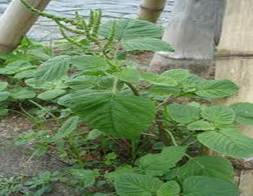 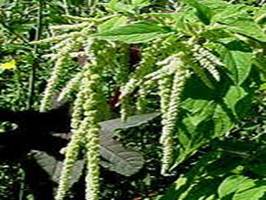 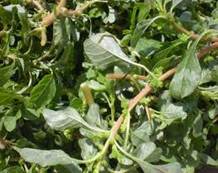 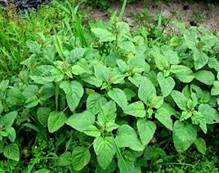 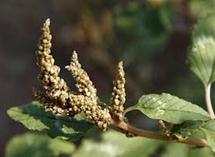