Abstract: Nowadays, petroleum and power plants emissions are increasingly recognized as a serious, worldwide public concern. In recent years, there has been an increasing interest to find solutions to decrease SO2 and the sulfur dioxide emissions from petroleum and electricity facilities. So far, several attempts have been made to figure out methods, procedures or techniques to lessen the emissions of SO2 which requires high cost to develop these techniques. However, the current research provides a solution to this issue through simulation, which allows new ways to test and diagnose these methods, procedures with low cost and danger. Nevertheless, solubility of SO2 in water may consider as conventional approach while sulfur dioxide of SO2 is a soluble gas in water, which can be oxidized through cloud and fog by producing sulfuric acid. Finally, this paper offers a new way to test SO2 solubility through using CFD modeling Airlift reactors.

Airlift loop reactors have emerged as one of the most promising devices in chemical, biochemical and environmental engineering operations. Its main advantages over conventional reactors include excellent contact among different phases, ease of removal or replenishment of particles, and high heat and mass transfer rates (Zhang, et. al, 2006). Airlift reactors are reaction vessels divided into two main sections ± the riser, where the gas is usually injected, and the down comer. As a result of the different gas holdup in the riser and in the downcomer, the bulk density of the fluid in these zones is different and liquid circulation is induced. (Freitas and Teixeira, 1998)

The numeric simulation in Fluid Mechanics ,Heat and Mass Transfer, commonly known as CFD "Computational Fluid Dynamics", has an expressive development in the last 20 years as a tool for physical problem analyses in scientific investigations, and nowadays as a powerful tool in solving important problems applied to engineering CFD permits a detailed investigation of local effects of different types of equipment, such as chemical and electrochemical reactors, heat exchangers, mixing tanks, cyclones, combustion systems, among others (Silva et. al.,2005). For the numerical computation of two-phase flows two approaches are mainly applied, namely the Euler/Euler and the Euler/Lagrange approach. The first method considers both phases as interacting continua, while in the second method the discrete nature of the dispersed phase is taken into account by tracking a large number of individual bubbles through the flow field (Lain et.al. 2000).

An increasing number of papers deal with CFD application to bubble columns. Where3D simulation of bubble column; gas holdup was calculated by plotting the distribution of gas volume fraction vs. column height(Bohn, 2000).Also commercial code CFX 4.3 used to simulate the gas-liquid flow in 3D rectangular bubble columns. The movement of a bubble plume in a 3D bubble column was also simulated where in contrary to the other case only little temporal behavior was found (Deenet. al. 2000). CFD simulations of the bubble column have been performed using several multiphase approaches, which performed to study the effects of superficial gas velocity, sparger configuration (including bubble diameter), and the height to width (H/W) ratio of the column on the low frequency oscillations and time averaged flow variables, such as vertical liquid velocity and gas holdup (Buwa and Ranade, 2003).

In the present work some assumptions were made in the development of the mathematical model: The airlift reactor (SO2 (gas)/water system) consists in four sections (riser, downcomer, top and the bottom sections; gas and liquid phase)with a constant density for the entire reactor; for the internal-loop reactor. The process operates sat constant pressure and temperature.

In present work Eulerian simulations were carried out for an airlift reactor SO2/water system using 3-D CFX-5, shown schematically in figure (1).Where the column height 77cm, and radius 8cm with sparger (radius 0,4cm).Above the base of column 3cm and the draft tube(height 70cm, 6.5cm) above the column base 3.5cm. The gas velocity, ug, at the bottom inlet was varied in range (1 to 7 with ramp 2 m/s). 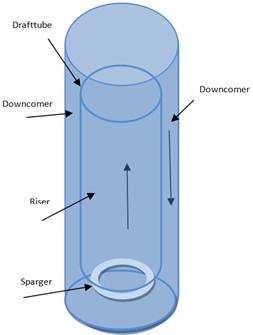 The governing equations describe the CFD calculations performed in this research. The multi-fluid model section describes the general formulation of the model equations. The multi fluid model will be used to setup Euler- Euler simulations.

In Euler-Euler simulations, separate phases are treated as interpenetrating fluids. This means that at a certain position, all phases can be present with a certain volume fraction, and no clear interface between the phases can be established. This allows both the length and the time scale on which these equations are being solved. The only body force taken into account in this research is gravitational force:

The formulas above define

equations for the following

For this system of equations to be solved

more equations need to be added. In this research, the additional equation defines that all phases share the same pressure field (Van Baten, 2000):

The particle model models the interphase momentum transfer between a continuous phase and a disperse phase (van Baten, 2000):

Or, alternatively (only if explicitly mentioned), a modification of equation (15) that takes into account the holdup of the continuous phase (Van Baten, 2000):

In the above, the drag coefficient CDis a model parameter and d represents the average size of the particles or bubbles that make up phase.

In this research, the drag coefficient CD is based on the distorted flow regime (the intermediate regime between spherical bubbles and spherical cap bubbles)(Van Baten, 2000):

Observed change from bubbly flow to transition flow is asymptotic depending on various factors [Wallis, 1969] which affect the size of the gas bubble by altering the degree of coalescence. The flow regime transition is normally identified based on instability theory, analysis of fluctuation signals, and the drift flux model. Higher gas density is found to have a stabilizing effect on the flow and that the gas fraction at the instability point (i.e., transition point) increases with gas density, while the gas velocity at the instability point only slightly increases with gas density. The drift flux of gas increases with the gas holdup in the dispersed regime; in the coalesced bubble regime, the rate of increase is much larger (Zhe Cui, 2005).

In this method, the drift flux, jGL (the volumetric flux of either phase relative to a surface moving at the volumetric average velocity) is plotted against the superficial gas velocity, uG. The drift flux velocity is given by:

Where εg is gas holdup and uLis superficial liquid velocity. The positive or negative sign indicates counter-current or co-current flow of liquid relative to the gas phase, respectively. In the case of stationary liquid phase (uL= 0) this equation simplifies to:

The change in the slope of the curve of the drift flux versus gas holdup represents the transition from homogeneous to heterogeneous flow.

The interfacial area density (or concentration) is defined as the sum of the interfaces per unit volume of two-phase mixture. This term appears in basic conservation equations in two-fluid model formulations. In order to close the equation system, this term is usually given as a closure law. With an assumption of spherical bubbles, the local interfacial area concentration αi is given as (van Baten, 2000):

For particle model a dispersed phase, p , with volume fraction,

Recent publications have shown that hydrodynamics of airlift reactors and bubble column can be estimated with computational fluid dynamic simulations based on Eulerian equations. We are interest to work at homogenize region because the specifications of bubble (size, number) small size, large no. in order to get large interfacial area for best mass transfer. So that for all flow processes in the reactor; setting a constant value of bubble size means that neglecting effects of coalescence, bubble-breakup due to hydrostatic pressure which decrease with increasing vertical position in the reactor and thus can be held responsible for the model’s actual inability to account for the flow regime transitions observed in the measurements.

The Following snap-shots in figure (2) show 3D axis-symmetric simulations results for gas holdup at different inlet gas velocities. The colors depict gas holdup according to the scale shown on the left. However,in draft tube the intermediate compound decrease the possibility of decomposes with high velocity because of low retention time. Also Volume fraction for SO2 approximately identical between two regions degassing zone (outlet) and draft tube region because high percentage of SO2 is dissolve in water at this region without decomposing (intermediate compound) during raising in column.

The gas holdup in down comer remains lower than that in the riser as shown in figure (3), the difference in the gas holdups between the two regions generate changes in the fluid density which drives the liquid circulation. Circulating the liquid flow enhances the heat transfer and makes the liquid properties homogeneous in the column. 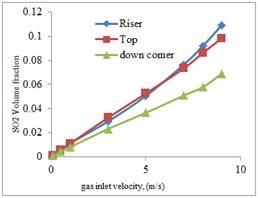 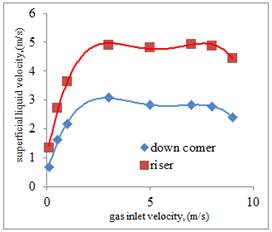 Within the central core of the riser, the gas holdup profiles are nearly uniform for the whole range of gas inlet velocities (ug) values. As shown in figure (5). 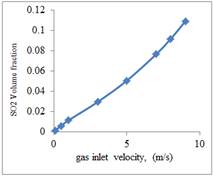 Figure (5). SO2 volume fraction versus gas inlet velocity in riser.

Notably, the configurations of gas-liquid flow take place in the riser bubbly or bubbly turbulent flow. The transition gas holdup and gas inlet velocity identified using the drift flux plot, as shown in figure (6), where the change in the slope is the transition holdup (0.085) and from figure (5) the transient inlet gas velocity (5.79 m/s) 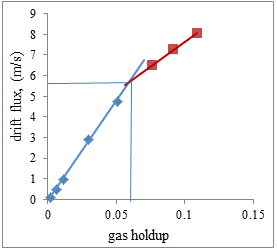 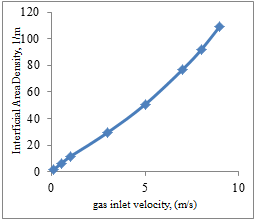 To conclude, there was an urgent need to address the emissions problems caused by Power plants and Oil industries and in order to find an innovative way and low-cost solutions. The researchers used the water as means for absorbing gases (sulfur dioxide) in the bubble column (airlift reactor). Recently, researchers have shown that the ability of water to dissolve sulfur dioxide and absorb enormous amounts of hazardous gases in ordinary conditions is considered an effective and low-cost solution.