Biphenyl is an organic compound occurs naturally in coal tar, crude oil and natural gas and it is mainly isolated from these sources by distillation process. It’s a white crystalline compound with peculiar pleasant smell [1]. Biphenyl is mainly a neutral molecule however, it participates in a number of reactions similar like benzene such as substitution reaction upon treatment with halogens in the presence of Lewis acid. Biphenyl is an important compounds used as an intermediate for organic synthesis and they have insightful pharmacological activity. Biphenyl has been used for synthesis of wide range of compounds with diverse pharmaceutical applications [2] etc. For instance, biphenyl carboxylic benzimidazole derivative has excellent antihypertensive activity [3]. Additionally, biphenyl-4-carboxylic acid 2-(aryl)-4-oxo-thiazolidin-3-yl–amide was designed and studied for its antimicrobial activity [4].

However, the biphenyl has low reactivity due to lack of functional groups [2] hence, it should be modified in order to improve its reaction kinetics. Recently Chaudhary et. al., showed that crystallite size reduction due to ball milling may have significant influence on improving reaction kinetics [5]. The other strategies were grain size reduction and catalyst addition [6-10]. Recently biofield treatment was used as a potential strategy to modify the physical and thermal properties of various metals. Hence, authors are keen to investigate the influence of biofield treatment on biphenyl in order to modulate its physical and thermal properties that can improve its reactivity.

Researchers have experimentally demonstrated the presence of electromagnetic field around the human body using medical technologies such as electromyography, electrocardiography and electroencephalogram [11]. Additionally, it was shown that bioelectricity generated from heart, brain functions or due to the motion of charged particles such as protons, electrons, and ions in the human body [12]. Thus, the human body emits the electromagnetic waves in form of bio-photons, which surrounds the body, which is commonly known as biofield. Therefore, a human has the ability to harness the energy from environment/Universe and can transmit into any object (living or non-living) around the Globe. The object(s) always receive the energy and respond into useful way that is called biofield energy and this process is known as biofield treatment.

By considering the above-mentioned excellent results outcome from biofield treatment and pharmaceutical significance of biphenyl, this study was undertaken to investigate the impact of biofield on physicochemical properties of these compounds.

Biphenyl was procured from Loba Chemie Ltd., India. The sample was divided into two parts; one was kept as a control sample, and another was coded as treated sample. The treatment group was in sealed pack and handed over to Mr. Trivedi for biofield treatment under laboratory condition. Mr. Trivedi provided the treatment through his energy transmission process to the treated group without touching the sample. The control and treated samples were characterized by XRD, DSC, TGA, FT-IR, UV-visible spectroscopy and surface area analysis.

XRD analysis of biphenyl was carried out on Phillips, Holland PW 1710 X-ray diffractometer system, which had a copper anode with nickel filter. The radiation of wavelength used by the XRD system was 1.54056 Å. The data obtained from this XRD were in the form of a chart of 2θ vs. intensity and a detailed table containing peak intensity counts, d value (Å), peak width (θ0), relative intensity (%) etc. The crystallite size (G) was calculated by using formula:

The control and treated biphenyl were analyzed by using a Pyris-6 Perkin Elmer DSC on a heating rate of 10ºC/min under air atmosphere and air was flushed at a flow rate of 5 mL/min.

Where, T Control and T Treated are the melting point of control and treated samples, respectively.

Where, ΔH Control and ΔH Treated are the latent heat of fusion of control and treated samples, respectively.

Thermal stability of control and treated biphenyl were analyzed by using Mettler Toledo simultaneous TGA and differential thermal analyzer (DTA). The samples were heated from room temperature to 400ºC with a heating rate of 5ºC/min under air atmosphere.

Where, Tmax, control and Tmax, treated are the maximum thermal decomposition temperature in control and treated sample, respectively.

FT-IR spectra were recorded on Shimadzu’s Fourier transform infrared spectrometer (Japan) with frequency range of 4000-500 cm-1. The treated sample was divided in two parts T1 and T2 for FT-IR analysis.

UV spectra of control and treated biphenyl were recorded on Shimadzu UV-2400 PC series spectrophotometer with 1 cm quartz cell and a slit width of 2.0 nm. The analysis was carried out using wavelength in the range of 200-400 nm. The treated sample was divided in two parts T1 and T2 for the analysis.

Where, S Control and S Treated are the surface area of control and treated samples respectively. 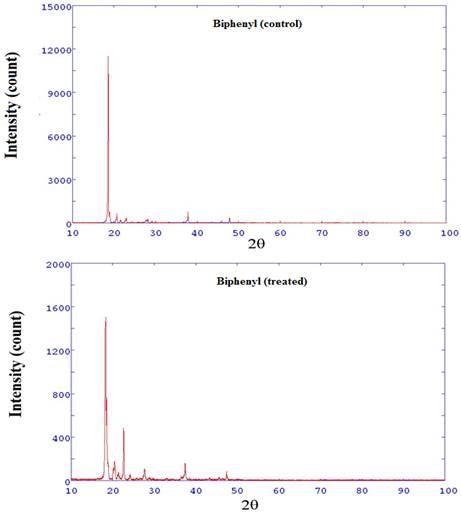 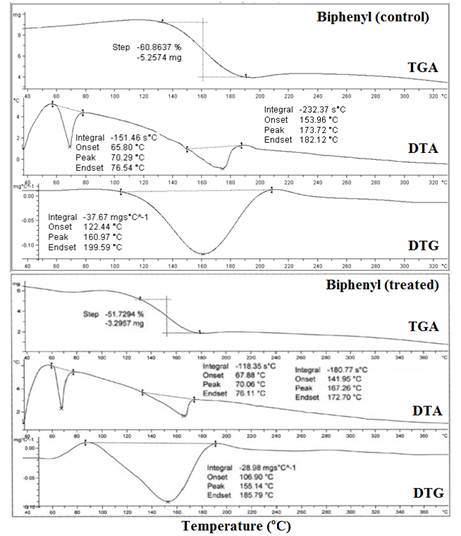 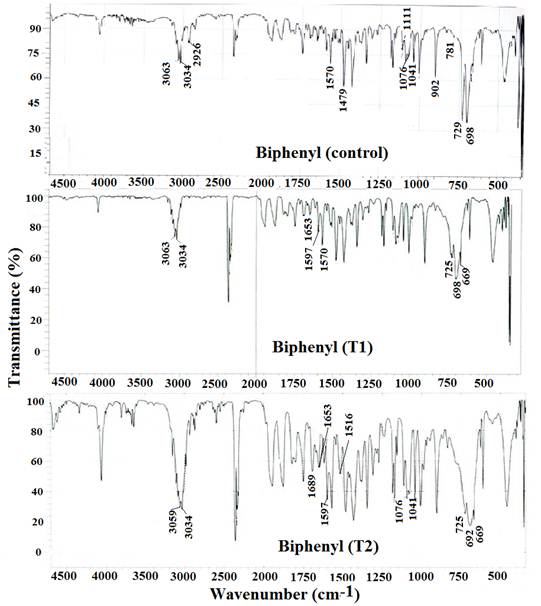 FT-IR spectrum of treated biphenyl (T2) is shown in Figure 4. The FT-IR spectrum showed intense peaks at 3034 and 3059 cm-1 which were due to aromatic C-H stretching vibrations. The stretching peaks at 1516-1597 cm-1 were mainly due C-C bond in the phenyl ring. Aromatic C=C bending peaks were observed at 1653-1689 cm-1. Other peaks were observed at 1041, and 1076 were due to aromatic C-H bending in the T2 sample. The FT-IR results of treated biphenyl (T1 and T2) showed no change in frequency of the absorption peaks as compared to control. This indicated that biofield treatment has no significant effect on altering the structure of biphenyl. 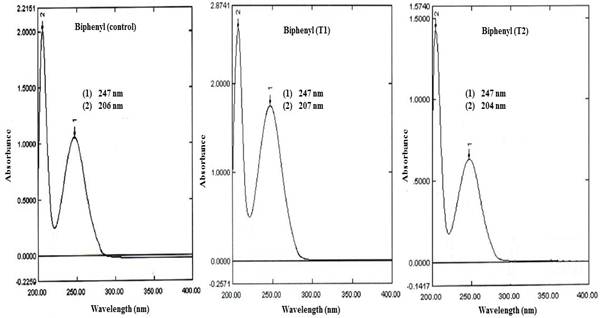 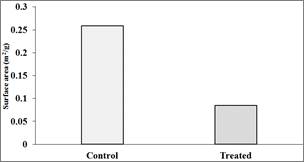 The authors would like to thank all the laboratory staff of MGV Pharmacy College, Nashik for their assistance during the various instrument characterizations.