Abstract: Conventional treatment of textile wastewater such as biological treatment discharges will no longer be tolerated and identified as non-biodegradable. Advanced processes such as adsorption and advanced oxidation hold great promise to provide alternative for better treatment and protection of environment. In this study, adsorption process is carried out for both batch (kinetic and isotherm) studies using natural wheat straw (NWS) as low cost adsorbent, modified wheat straw (MWS) and Activated Carbon (AC) for comparing the results. Batch adsorption experiments were conducted on a shaker at 200 rpm, room temperature using 250 mL conical flasks contains 100 mL of dye solution to study the effects of adsorption conditions. The effect of pH was determined by adjusting pH values (2.5 – 10.5). To study the effect of initial dye concentration, six different concentrations of reactive blue dye (5, 20, 30, 50, 70 and 90) mg/L were prepared and used. Results showed that the removal percent using NWS, MWS and AC are; 68%, 92.17% and 90.5% respectively. Equilibrium isotherm experiment were carried at different dosages (0.1 – 1 g) to predict the isotherm model; Langmuir, Freundlich and BET. The experimental data showed that reactive blue is fitted with Freundlich isotherm (1/n = 1.25, 0.67) for both (NWS) and (MWS) respectively, and for (AC) is fitted with Langmuir isotherm. Three kinetic models, were selected to fit the kinetic data; pseudo first, second order and intra-particle diffusion, reactive blue is fitted with intra-particle diffusion model with (NWS) and (MWS), and Pseudo second order for (AC).

The textile industry consumes a substantial amount of water in its manufacturing processes used mainly in the dyeing and finishing operations of the plants. The wastewater from textile plants is classified as the most polluting of all the industrial sectors, considering the volume generated as well as the effluent composition. In addition, the increased demand for textile products and the proportional increase in their production, and the use of synthetic dyes have together contributed to dye wastewater becoming one of the substantial sources of severe pollution problems in current times [1]. Dye wastewater usually consists of a number of contaminants, including acids, bases, dissolved solids, toxic compounds, and color. Color is the most noticeable contaminant even at very low concentrations, and it needs to be removed or decolorized before the wastewater can be discharged [2]. Reactive dyes which are usually characterized by azo-aromatic groups which are of extreme environmental concern due to their carcinogenic, mutagenic, and inert properties. The complex aromatic structures of the dyes result in physicochemical, thermal and optical stability and resistance to conventional wastewater treatment [3]. Various methods for dye removal were divided to three categories, which biological, physical and chemical methods such as oxidation, electrochemical destruction, adsorption by activated carbon, ion exchange, membrane filtration and coagulation [4]. Among the previous water treatment techniques, adsorption has been found to be superior to other techniques for water reuse in terms of initial cost, flexibility and simplicity of design, ease of operation and insensitivity to toxic pollutants, also does not result in the formation of harmful substances [5]. Since activated carbon is an expensive adsorbent, many researchers have been studied about the feasibility of using inexpensive alternative low cost adsorbents from agricultural by-product. Soldatkina and Zavrichko 2013 showed that barley straw used in removing anionic acid red and cationic methylene blue from their aqueous solutions [6]. Fiorentin et al., 2010 used orange bagasse as an alternative adsorbent at pH = 2 for removal of reactive blue 5G [7]. Robinson et al., 2002 used low-cost, locally available, renewable biosorbents; apple pomace the results showed that 81% of dyes was removed from the synthetic effluent [8]. Singh et al., 2011 used Sawdust is a by-product of saw mills for removing acid dye (Orange G) from aqueous solutions [9]. Agricultural wastes are renewable, available in large amounts and are less expensive as compared to other materials used as adsorbents and better than other adsorbents because agricultural waste is usually used without or with a minimum of processing (washing, drying, grinding) and, thus, reduce production costs by using a cheap raw material and eliminating energy costs associated with thermal treatment [10]. The aims of this study are; the removal of Reactive Blue dye (H3R) that used in Al-Hilla textile factory (Iraq), using locally available low-cost adsorbent natural wheat straw (NWS), modified wheat straw (MWS) with cationic surfactant and comparing the performance of (NWS) and (MWS) with Activated carbon (AC) in decolorizing, study the equilibrium isotherm and kinetics.

An adsorption isotherm is a graphical representation showing the relationship between the amount adsorbed by a unit weight of adsorbent and the amount of adsorbate remaining in a test medium at equilibrium. It maps the distribution of adsorbable solute between the liquid and solid phases at various equilibrium concentrations [11]. Adsorption isotherms are important to describe the interaction of adsorbate molecules with adsorbent surface [12]. In this study, Langmuir, Freundlich and BET models were employed for the treatment of the equilibrium adsorption data. The applicability of the isotherm equation is compared by judging the correlation coefficients R2.

The Langmuir isotherm assumes adsorption is reversible and occurs only for the monolayer on the adsorbent surface.

The Freundlich equation is one of the well known models applicable for a single solute system. It is an empirical equation used to describe the distribution of solute between solid and aqueous phases at a point of saturation.

Where KF (mg1-1/n L1/n g-1) and 1/n are Freundlich constants depending on the temperature and the given adsorbent–adsorbate couple. The parameter n is related to the adsorption energy distribution, and KF indicates the adsorption capacity [14].

The BET model assumes that layers of molecules are adsorbed on top of previously adsorbed molecules. Each layer adsorbs according to the Langmuir adsorption model.

Where qe and Ce as above Co initial concentration of adsorbate mg/L. qm maximum adsorption capacity in forming complete monolayer on the surface mg/g. and KB is a constant relating to the energy of interaction with the surface (L/mg).

Where: qe and qt are adsorption capacity at Equilibrium and at time t, respectively (mg/g), K1 is the rate constant of pseudo first order adsorption (1/min).

Where K2 is the second order constant (g.min/mg).

Where qt is the amount of dye adsorbed (mg/g) at time t; C (mg/g) is the boundary layer thickness and Kp is the intra-particle diffusion rate constant (mg/g.s1/2).

Batch adsorption studies are performed to obtain the key parameters such as isotherm constants and pore diffusivity.

Reactive Blue dyes with molecular weight (562) g/mol and wavelength (585 nm), is supplied from Al-Hilla textile factory south of Baghdad. A stock solution of (1000 mg/L) is prepared by dissolving 1.0 g of dye in 1.0 L of distilled water and then the solution is diluted the desired concentrations, Fig. 1 shows the chemical structure of Reactive Blue [16].

Three adsorbents are used Natural wheat straw (NWS) as a low-cost adsorbent, modified wheat straw (MWS) and Activated carbon (AC). Wheat straw is collected from countryside, washed with tap water several times to remove dust and unwanted parts, then washed with distilled water and dried at 70°C for 24 hr. the dried wheat straw then sieved to the desired size particle (1 mm), stored in a glass container and named (NWS). 35 g of wheat straw was weighed and mixed with 500 mL of CTAB solution having a concentration of 4.0 (g/L). The mixture was shaken for 5 h at room temperature. washed with distilled water in order to remove any loosely adsorbed surfactant, dried about 70°C and sieved before use, then stored and named (MWS) [3].

Batch adsorption experiments were conducted on a shaker at 200 rpm, room temperature using 250 mL conical flasks contains 100 mL of dye solution to study the effects of adsorption conditions. The effect of pH was determined by adjusting pH values (2.5 – 10.5). To study the effect of initial dye concentration, six different concentrations of reactive blue dye (5, 20, 30, 50, 70 and 90) mg/L were prepared and used. The effect of adsorbent was carried out using amounts of adsorbents ranging (0.1, 0.2, 0.4, 0.6, 0.8 and 1.0) g. After the biosorption process, the solution was centrifuged for 10 min at 8000 rpm and supernatants were analyzed for remaining dye concentration using a spectrophotometer (Shimadzu UV-1800) at the dye wavelength.

Fourier transform infrared spectroscopy (FTIR) was useful to examine the surface groups of the adsorbents and to identify some characteristic functional groups [17]. Fig. 2 shows the peaks that indicates the complex structure of wheat straw. The strong peak around 3414 cm-1 represents the hydroxyl groups -OH, the bond at 2916 cm-1 is attributed to the presence of the C-H bond. The peaks of 1732 and 1655 cm-1 are refer to the carbonyl group –C=O, 1508 cm-1 represents the aromatic rings, while 1427 and 1373 cm-1 associated with the C-O in phenols and – CH3 respectively [17], [18], [19]. 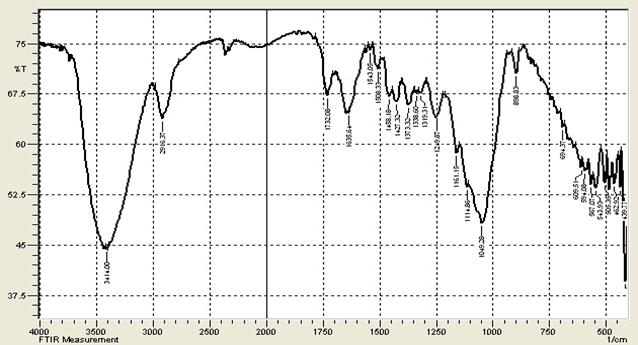 The physical morphologies and surface properties of the Natural and Modified Wheat straw were examined by using scanning electron microscopy technique SEM. From Fig. 3, a and b it can be concluded that SEM images of NWS and MWS showed severe differences, surface of MWS contained more pores than NWS surface and this results in higher surface area. 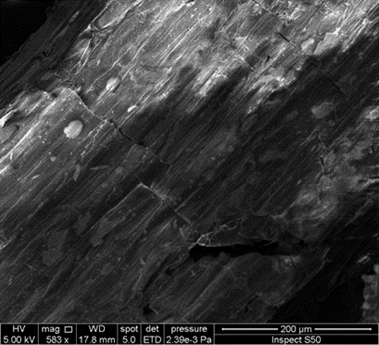 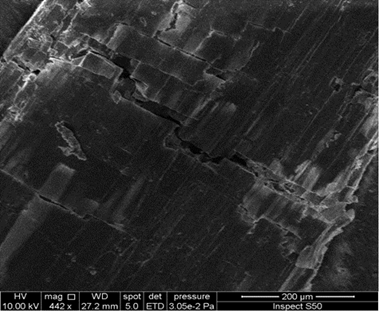 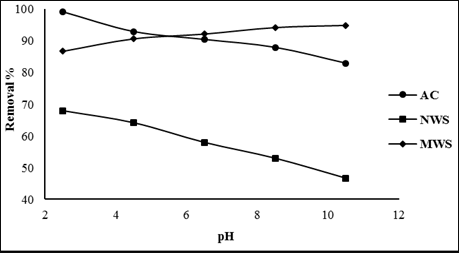 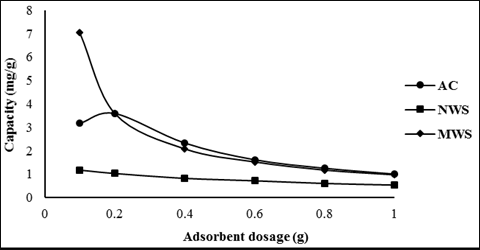 Fig. 7 shows that the dye concentration reduced from an initial value to an equilibrium value provided the contact time is sufficient. According to results, 300 min was obtained as equilibrium contact time for NWS which is longer than the equilibrium time of both MWS and AC. at this time, therefore, 300 min of contact time was chosen as the adsorption time for further experiments to ensure that the equilibrium was achieved, due to saturation of absorption sites on absorbent; dye removal efficiency will not have any changes. [7], [24] 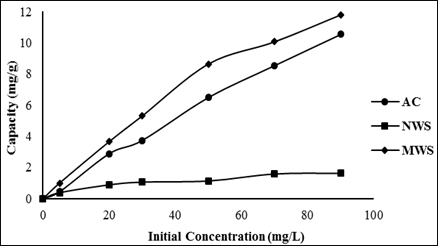 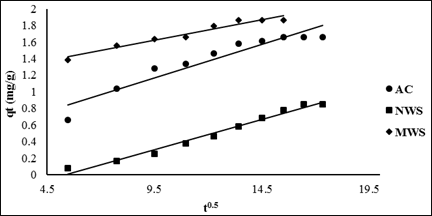 Adsorption is usually described through isotherms, that is, functions which connect the amount of adsorbate on the adsorbent. Distribution of metal ions between the liquid phase and the solid phase can be described by several isotherm models such as Langmuir and Freundlich [27]. Fig. 9 shows the Freundlich isotherm for NWS and MWS respectively. The Freunlich equation yielded the best fit to the experimental data in comparison to the other equations in this study. The Freundlich equation is suitable for homogeneous and heterogeneous surfaces, indicating a multi-layer adsorption. Table 2 shows the adsorption models parameters. The magnitude of the Freundlich constant n gives a measure of favorability of adsorption. Values of n > 1 represent a favorable adsorption process. [19] 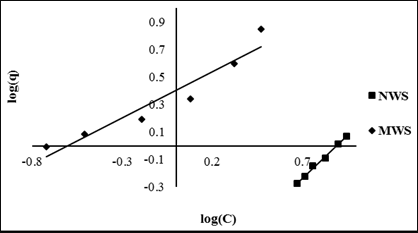 The following conclusions may be drawn from the present investigation:

1.   A surfactant modified wheat straw MWS produces a good adsorption for reactive blue dye and remove the dye at a faster rate compared to NWS.