Modelling and Simulation of Gauze Reactor of Ammonia Oxidation

Abstract: Modelling of catalytic ammonia oxidation reactor for nitric oxide production in nitric acid plant over gauzes of Pt/Rh catalyst was the subject of current study. Viscosity, mass transfer and kinetic equations were used for the gas mixture feeding the reactor, partial pressure and mole fraction of ammonia was essential, also wire diameter was considered to detect platinum losses during oxidation operation. In order to investigate the performance of catalytic oxidation reactor, ordinary equation for determining of conversion yields of ammonia to nitric oxide was solved in mathematical model numerically. Variations of conversion with inlet mixture temperature, mixture concentration, inlet pressure and gauze temperature during cycle were investigated. Platinum losses rate as platinum oxide (PtO2) was studied with gauzes surface temperature by using numerical solution of the mathematical model. Modelling results were compared with an industrial reactor data. Comparing industrial data for all studied variables with those obtained by using mathematical model have shown the higher degree of accuracy of the model to predict the operating values with minimum deviation.

To be able to analyze and optimize the operation of a plant, one must first have a mathematical model describing the real behavior of the process. The modelling of a plant can be done in many different ways; one can use the physical and chemical relationships the process is based on, or one can try to find the model experimentally. So we can have different models for the same process.

Catalytic oxidation of ammonia is commercially one of the most important reactions in heterogeneous catalysis. Uronen [1] has shown that the overall oxidation rate is controlled by the transfer of NH3 from the bulk gas phase to the platinum surface. [1] The behavior of an industrial reactor for the oxidation of ammonia with Pt–Rh gauzes was simulated by means of a mathematical model accounting for the axial dispersion of the components, the effect of temperature on the physico-chemical properties of the reacting mixture. The effect of the preheating temperature, the input mixture composition, pressure and reactor load on the NO yield was examined. The calculated NO yields agree well with the values actually attained in industrial reactors. The effect of the reaction mixture composition and total pressure on the yield is also consistent with observed dependences. [2]

Reactors containing a catalyst in the form of a gauze are applied to the production of nitrogen oxides during the production of nitric acid (the Ostwald process). The reactor for the oxidation of ammonia considered is shown in figure 1. It is composed of: (1) Catalyst layer, (2) Layer for catchment of the escaped catalyst, (3) cooling area. The rapid cooling helps in minimizing the loss from decomposition of generating NO. [4]

In dependence on the catalyst used and on the process conditions (temperature, pressure, gas phase composition), the catalytic oxidation of NH3 can generally involve the following reactions: [2]

In addition, the following processes also play a minor rule.

The total pressure during the combustion of NH3 is the most important technological parameter of industrial oxidation of ammonia. Normally, the working temperature in the catalyst bed is about 890°C, and increases with increasing pressure. [2]

The objective of the present work was to find an appropriate mathematical model for a reactor for the oxidation of ammonia on Pt-Rh gauzes. The model should account for the following basic features of the process:

• Increase in NO yield if the specific surface area of the catalyst is increased.

• Decrease in the NO yield if the concentration of NH3 in the feed is increased. 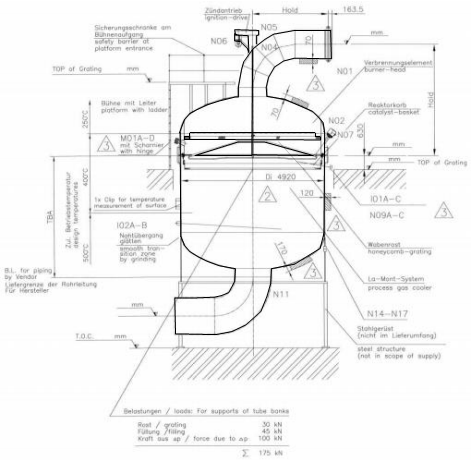 Figure 1. Reactor for oxidation of ammonia [14].

The reaction is highly exothermic and not equilibrium limited. The following relations have been reported for this reaction system in the limited temperature range of interest. [3]

Where T in K

For convenience the equations for viscosity and thermal conductivity of the mixture in the same temperature regions will also be given at this point.

Where T in K

Early experimental work on this process demonstrated that under normal operating conditions the physical transport of ammonia to the catalyst surface is the rate determining step. [3]

Bases on the physical and chemical phenomena involved, we can qualitatively conclude the most important factors affecting on the conversion of the oxidation process are: ammonia to air ratio in the feed, feed temperature, total gas charge on sieves, plant pressure, number of sieves and sieve dimensions. [4]

At low temperatures or with deactivated catalyst the chemical rate can become limiting or partially limiting. With active catalyst, it is clear that high temperatures and high velocities will produce essentially total conversion of ammonia. The maximum temperature is limited by the aforementioned catalyst loss that becomes excessive much above 900°C. The loss per unit surface area is apparently a direct function of gauze temperature, mass flow rate, and ammonia/oxygen ratio in the feed. [5]

On the of mass-transfer control the rate of ammonia oxidation may be written in terms of a mass-transfer coefficient with the ammonia partial pressure at the catalyst surface assumed to be zero for this rapid reaction. [3]

Where PA is the partial pressure of ammonia in bulk fluid and awR is the surface area per unit volume of screen. For shallow beds, axial diffusion must surely be important, but the very high flow rates encountered in commercial equipment cause it to be less important than the problem of equal flow distribution across the gauzes. By including a gas distributor below the catalyst pad like honey comb, this problem is greatly alleviated. [6]

The model is developed based on plug flow. [3]

For this rapid reaction assume that partial pressure of ammonia on the catalyst surface is zero. Then the rate of transfer of ammonia becomes [3]

Where ns is the number of gauzes and fw is the wire area per gauze cross sectional area for one gauze. [3]

or integrating and simplifying by assuming constant number of moles [3]

Where Mm is the molecular weight of the mixture.

Where dw is the diameter of wire. MF/Mm is approximately unity.

To calculate the rate of Pt losses, [5]

The developed model predictions for catalytic ammonia oxidation reactor were investigated and compared with the industrial data. The figures were simulated using Matlap R2014a.

3.1. Effect of Inlet Mixture Temperature on NO Yield

Figure 2 shows the effect on inlet mixture temperature of mixed gases to burner on NO yield for knitted gauzes. It is clear that NO yield decreases with increasing inlet temperature and this is because of catalytic decomposition of NO at the gauzes and the side reaction of ammonia at the metallic parts of the reactor body before coming in contact with O2. [3]

3.2. Effect of Inlet Mixture Temperature on Rate of Reactions

3.3. Effect of Inlet Pressure on Rate of Reactions

Figure 5. Plot of conversion vs ratio.

3.4. Effect of inlet Ratio on NO Yield

3.5. Effect of Gauze Temperature on NO Yield

Figure 7 differentiate between the calculated results from the mathematical model and the experimental results. As the gauze temperature increases, the NO yield also increases.

Figure 6. Plot of NO conversion vs gauze temperature (model data).

Figure 7. Plot of NO conversion vs gauze temperature.

Figure 8. Plot of NO conversion vs gauze temperature.

3.6. Effect of Gauze Temperature on Rate of Pt Losses

From the results of the present work, it can be concluded the following:

3. For ammonia to air ratio, Model data showed that NO yield increases with increasing ratio and when the ratio become 11.2%, the NO yield will decrease. The industrial data confirmed only till 11% ratio as it is forbidden to operate the plant at ratio more than 11% to be away enough from lower explosive limit.

YA: mole fraction of A in mixture

PA: Partial pressure of A (atm)

fw: Wire area per gauze cross-sectional area for one gauze

XA: Mole fraction of converted ammonia to NO