Metal nanowires have attracted a great deal of research interest in recent years because of their electronic and optical properties [1] and potential applications in nanodevices [2]. Several groups prepared and studied the silver nanowires or nanorods using templates [1-3]. Currently, the synthesis of nanowires by the electrochemical deposition is of great interest. To fabricate and investigate the growth mechanisms of metal nanowires in the cylindrical pores of a template is of essential and technological interests [4]. Template commonly used for nanowire synthesis is Anodic Aluminum Oxide (AAO) owing to its salient features such as decorative properties, nanopore symmetry and corrosion resistance [5,6]. In comparison to some other deposition procedures, AAO template method is more inexpensive and allows to generate very thin nanowires [7] Controlling the growth of metal nanowires is important to achieve these applications. Therefore, understanding various factors that influence the growth of electrodeposited metal nanowires is of scientific and technological interests. Deposition potential plays an important role in controlling the metal nanowire growth. For example, the nanowires of Au, Ag, and Cu are single crystalline under the low deposition potential, and polycrystalline under the high deposition potential [8]. We have proposed in the previous work that the growth of metal nanowires can be pictured as the four steps at the atomic-level scale [9]. The dehydration of hydrated metal ions can be the most important among the four steps. The dehydration involves valence electrons tunneling to hydrated metal ions [9,10], leading to neutralization of the hydrated metal ions. The neutral metal atoms are adsorbed on the surface and then diffuse to surface sites (such as kink site) where they incorporate into the metal lattice, thus leading to the growth [9]. Therefore, the growth rate is related by the dehydration [9]. Since the probability of electron tunneling is related to the workfunction of metals, the workfunction can have a significant effect on the growth of metal nanowires. This paper offers different parameters that may be responsible for the fast growth of metal nanowires. 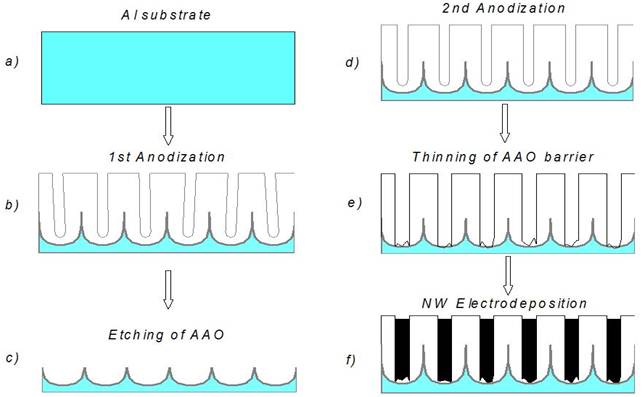 Firstly, high-purity aluminum foils (99.999%) were degreased in acetone and then were annealed and secondly, the aluminum foils were anodized two times. Thirdly, the alumina barrier layer was then dissolved in a 5 wt% phosphoric acid solution at 40°C. The templates obtained by this procedure have the cylindrical and hexagonally arranged pores. The average diameter and spacing of pores are estimated to be 50 nm and 100 nm. Assuming that the pore distribution is exactly hexagonal, the ratio of the area of a pore (

where 100 nm is the distance between two pores),

and 0.72M H3BO3 for deposition of Ni nanowires. The pH of the two as-prepared solutions was adjusted to 2 by adding 1M H2SO4 solution. Direct current electrodeposition (shown in Fig. 2) was conducted in a three-electrode cell at room temperature. 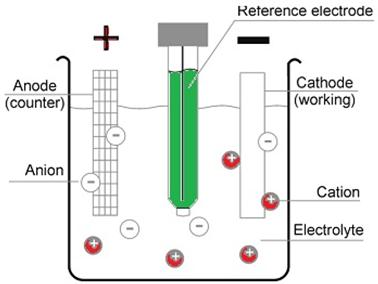 The area of the working electrode for growth of nanowires was 0.608cm2 (

). The reference electrode was the saturated calomel. The deposited Fe, Co and Ni nanowires were also examined by scanning electron microscope (SEM, JEOL JSM-6700F). In order to perform SEM observations, the AAO template was partly dissolved with a 5 wt% NaOH solution, and then carefully rinsed with deionized water for several times.

In the electrodeposition of metal, a metal ion Mn+ is transferred from solution into the ionic metal lattice, meanwhile electrons are provided from the external electron source (power supply) to the electron gas of the metal M [14]. This electrodeposition process can be pictured as the following four steps in the atomic-level scale. First, hydratedmetal ions in an aqueous solution diffuse to a metal surface and are adsorbed on this surface. (In hydrated metal ions, the water molecules of hydration are electrostatically attached to the metal ions.) Second, when an adsorbed hydrated metal ion captures electrons from the surface by quantum-mechanical tunneling, the metal ion becomes a neutral metal atom. The electrostatic attractive interaction between the neutral metal atom and water molecules is zero and the water molecules of hydration are displaced. Third, the neutral metal atom adsorbed on the surface. Fourth, an adsorbed metal atom diffuses to a surface site (such as kink site) where it incorporates into the ionic metal lattice, leading to the growth of nanowires. The current density arises from valence electron tunneling from the metal surface to hydrated metal and hydrogen ions, leading metal nanowire growth and hydrogen evolution, respectively.

Fig. 3 shows the SEM images of Fe, Ni and Co nanowires. The diameter of Fe nanowires (~50 nm) is the same as that of the pores of AAO template (~50nm), indicating that the cylindrical pores of the AAO template were fully filled with Fe metal atoms during electrodeposition.

Fig. 4 (a, b) shows the current density against time curves measured in the second-step deposition of Fe, Co and Ni nanowires at the overpotential (

Fig. 4. (a, b) Current density against time curves measured in the second-step deposition of Fe, Co and Ni nanowires at -0.9V and at -0.6V.

, pH, concentration of metal ions and temperature, the current density of deposition of Fe is higher than that of Co and Ni, indicating that Fe nanowires grow faster than Co and Ni nanowires. In the following, we will explain this result.

is the current density,

is the exchange current density,

is the charge transfer coefficient,

is the valence of deposited metal ions,

is the Faraday constant,

is the over potential,

is the gas constant, and

is the absolute temperature. Exchange current density of Ni is approximately the same as that of Co at pH 2.5 [16]. The valence of deposited Ni and Co ions, which is 2+, is also the same. Consequently, the current density (

) depends only on the charge transfer coefficient (

) and increases with increasing

. Here we will elucidate using the electron tunneling theory that the charge transfer coefficient of Co ( 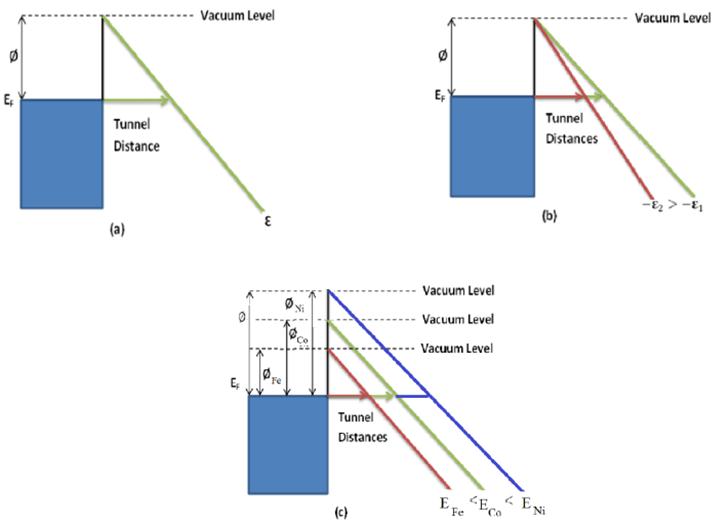 Fig. 5. Schematic diagram of field emission barrier, The height of the potential barrier is determined by the workfunction of the metal ø and slope below the vacuum level shows the applied electric field ɛ and the electron tunneling will occur at or near the Fermi level (a), dependence of the barrier width on applied electric field (b), width of potential barrier for different work functions (c) [22].

It is well-known that increasing the applied potential increases the current density as shown in the right side of Fig. 5a. This leads to the more rapid change of the potential of electrons outside the metal, as shown in Fig. 5b. In this case, the slope of electron potential with a higher electric field is steeper than that of a small electric field. The barrier width through which electrons tunnel becomes thinner and electron tunneling occurs more easily. Therefore, the current density increases with increasing the applied potential. The work function of metal can have an effect on the barrier width that electrons tunnel through. Fig. 5c shows that under the same applied potential (meaning that there is the same electric field strength in the double layer) the barrier width for the metal with small work function becomes thinner and electron tunneling takes place more easily. Therefore under the same applied potential, there is a higher current density for deposition of nanowires of the metal with a smaller work function. The structure of hydrated metal ions from surface can also be responsible for growth rate of metal nanowires. Different deposition technique like cyclic voltammetry will also be used in our further study about growth mechanism in near future.

The current density of depositing Fe nanowires is higher than that of depositing Co as well as Ni nanowires under the same overpotentials, pH, concentration of metal ions and temperature. This can be attributed to the smaller work function of Fe metal, compared to that of Co and Ni. For the surface with a smaller work function, the wave function of valence electron extends more above the surface. This causes a larger probability of electron transferring from Fe surface to hydrated Fe ions, leading to a higher charge transfer coefficient and so a higher current density.