Abstract: This paper discusses a novel method to clean VOC from any sources. Photocatalysis surpasses any other technologies in air purification for absorption of volatile organic compounds. A key component is the use of ultraviolet light to activate a photo-catalysis process that can also disinfect microorganisms including bacteria, viruses, moulds and even infectious diseases. The by-products of the photocatalytic process is only carbon dioxide and water. Results as tested by the Chinese government agency for its VOC removal efficacy at several factories is most encouraging. In conclusion, we have found a technology that can help clean the increasing air pollution in China to improve public health.

In western cities, the average person's respiratory system has to eliminate, every day, over 15 ml of particulate matter including dust, pollen, tar, acids, smoke, bacteria, carbon, metals and many other particles. The air quality of Beijing is 16 times worse than New York City and can soar to 40 times the International Safety Standard [1] [2]. The results showed that ambient air pollution had acute and chronic effects on mortality, morbidity [3], hospital admissions, clinical symptoms, lung function changes, and even cancer. The exposure–response relationship between air pollutants and daily mortality, morbidity, hospital admissions, and lung function has been established accordingly [4].

In a recent report of February 2016 from the Royal College of Physicians [5], entitled, "Every breath we take - The lifelong impact of air pollution" states the following.

"4·3 million people die annually from household air pollution, around 3·3 million of whom live in Asia. The major causes of these deaths are stroke, ischaemic heart disease, chronic and acute lung disease, and lung cancer. WHO estimates that 3·7 million people die annually from ambient air pollution, again most of whom (2·6 million) live in Asia. The ranking of causes of deaths remains broadly similar. Most of those at risk of ambient air pollution live in urban settings."

"This damage occurs across a lifetime, from a baby’s first weeks in the womb all the way through to the years of older age."

"Harm to babies and children will have an impact that lasts far into the future. For the same reason, any air quality improvements we make now will have long-lasting benefits."

"Older people, and adults with long-term conditions, are also vulnerable to the effects of air pollution."

The body automatically copes with such foreign matters by increasing blood flow, increasing air intake, tearing and sneezing, thus decreasing the person's alertness and efficiency. The economic costs of the health damage due to particulate air pollution in urban areas of Shanghai in 2001 was approximately 625.40 million US dollars, accounting for 1.03% of gross domestic product of the city [6]. Thus any means to clean the air has direct health and economic benefits.

Adsorption using certain substances such as activated carbon, silica gel, zeolite, activated alumina, or any porous materials with adsorption properties such that it can eliminate harmful pollution. Microporous and mesoporous materials have been widely used in the adsorption process. However, the most commonly is activated carbon, silica gel and molecular sieves. Unfortunately these materials have low adsorption capacity, become saturated and require frequent replacement. They are also issues of flammability and other problems associated with regeneration.

There are still shortcomings including high capital and operating costs, complexity and limited efficacy to some organic components. It is not ideal since it is prone to secondary pollution.

Biofilm is the use of microbial metabolic processes on a variety of organic and some inorganic biodegradable, generates CO2 and H2O. It can be effective in removal of contaminants from industrial emissions. This method is simple, low operation and maintenance costs, and no secondary pollution. But removal efficiency is poor and requires long retention time. Results varies for complex composition of exhaust gases.

Photochemistry is chemical reactions induced by electromagnetic radiation (usually "light"). Where the induced reactions involve a "light-activated" catalyst, the process is called "photocatalysis". Photosynthesis (the process by which plants use sunlight to convert carbon dioxide and water into complex carbohydrates and oxygen), is a natural photocatalytic process (figure 1). During the 1980’s and 1990’s intensive scientific and commercial activity followed the discovery that ultraviolet light shining on photocatalytic materials produced free-radical species and positively charged "holes" at the photocatalyst surface that aggressively and efficiently destroyed organic molecules, converting them into carbon dioxide and water (the reverse of photosynthesis). This process is commonly called photocatalytic "oxidation" or "PCO" even though both oxidation and reduction occur. The efficiency of the PCO process is dependent upon (a) the wavelength and intensity of the UV light, and (b) the surface area of photocatalyst exposed to the UV light. Specific titanium dioxide has strong photo catalyst reaction. It has strong oxidation and decomposition strength.

Certain wavelengths of light shining on a semi-conductor surface can also free electrons from the surface to participate in pollution scavenging (free-radical scavenging). Titanium dioxide, TiO2, is one such semi-conductor. Among the many semi-conducting materials, TiO2, is most extensively used because it has the advantages of low cost, abundance, chemical inertness, ease of manufacture and processing, and excellent photocatalytic activity in the UV region of the electromagnetic spectrum. Titanium is the eighth most abundant element in the earth’s crust. Annual production of titanium dioxide is approximately 2 million tonnes, for use as a benign colourant in food, cosmetics, toothpaste, paint, paper, and plastics. The World Health Organization and the US Environmental Protection Agency consider the toxicity and epidemiology of exposure to titanium dioxide to be minimal [7]. There are no negative health concerns.

Wide-area applications of photocatalysis are reported to reduce airborne nitrogen oxides (NOx’s) by up to 60% and volatile organic compounds (VOCs) by up to 80% in treated areas [8]. A major source of urban air pollution is vehicular exhaust [9]. Photocatalytic reactor system can operate for years with much less operator intervention and expense than filter systems, discussed above. 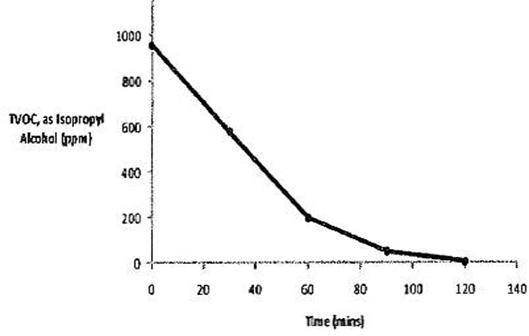 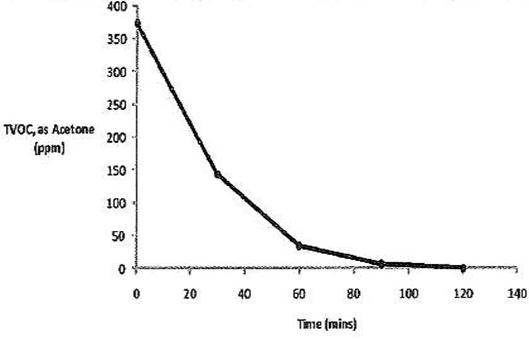 3.2. Results of Photocatalysis Treatment in a Paint Shop

We conducted a photocatalytic oxidation project (a partnership R&D between China and Canada, CanChi Envirotech Inc.) in China where a prototype unit was brought to determine the removal rate of VOC emissions from a Volkswagen painting and baking chamber (figure 4).

Testing was done on Friday Nov 27, 2015 and the results came back from the government testing agency on Friday December 4, 2015. 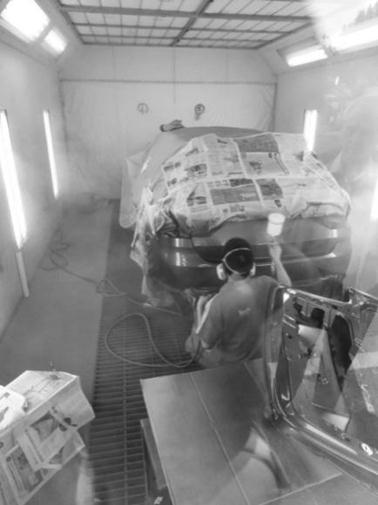 Fig. 4. Removal of VOC in a paint chamber.

With one pass-through the prototype unit, the test results for upstream (input) and downstream (output) of the prototype test unit, and the calculated removal efficiency is seen in Table 1.

Table 1. Test results with one pass-through of the prototype unit.

The by-products of this treatment is carbon dioxide (CO2) and water vapour. The amount of what is important is to meet the air quality standard of China for emissions. The target concentration for VOC emissions are as follows.

Post treatment of VOC emissions from our prototype meet the China air quality standard except for xylene that need about 5 more treatments. TVOC will require one additional treatment. Each treatment can be achieved by another pass through the photocatalysis unit. Recirculation is not possible since direct exhaust and 100% make-up air is required in this paint shop. Thus several treatments in series is possible (figure 5). 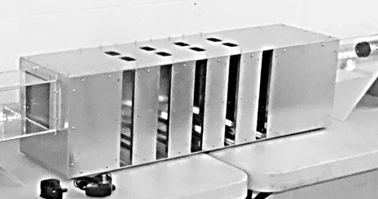 Crucial to the performance efficacy of photocatalysis is the catalytic reaction when UV light is incident on the TiO2 coating on quartz fibres. The design parameter is to ensure UV light is not shaded from particulates being drawn through the treatment unit. Particulate filter must be installed upstream of the photocatalytic media. Typically MERV 14 is recommended to ensure fine particulates do not clog up the photocatalytic media. MERV 14 removes 75%-85% of particles with an arrestance rate of 98%. The Dust-Spot efficiency is 90%-95%. Higher efficiency air filter would be better but this will result in increased static pressure.

When photocatalyst is exposed to light in the presence of water vapour, two highly reactive substances are formed: hydroxyl radicals [OH] and a superoxide anion [O2-1]. It allows the oxidation of airborne VOCs and toxic organic matter into carbon dioxide (CO2) and water at room temperature with UV or near-UV light source. Using short-wave ultraviolet (UV) radiation with a peak at 254 nm (UVC) for the photocatalysis also serves as germicidal action. A dosage of 3,000 microWatt-seconds/cm2 is sufficient to kill/deactivate up to 90% of many common microbes [11].

An experiment was conducted to determine the kill rate for various exposure times to UV light for three fungi species. Figure 6 shows that 75% and 80%-95% of the fungi were killed after 5 and 10 seconds respectively [12]. Laboratory test for bacteria using Escherichia coli removed 97% of the airborne microbial pollutants within 120 minutes (fig. 7). The photocatalysis technology acts like a "lightning strike" at the molecular level (nanoscale), destroying both microbes and odours (not "trapping" like filters). 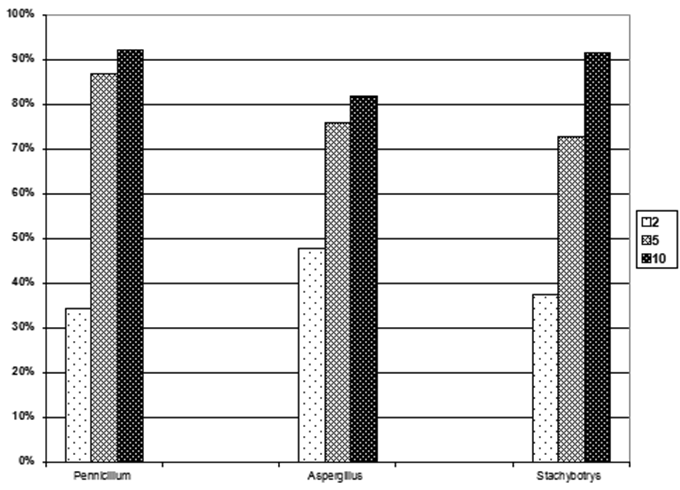 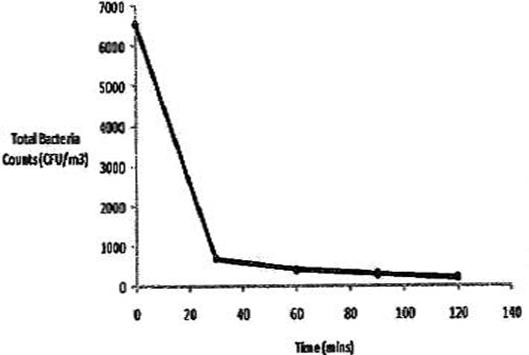 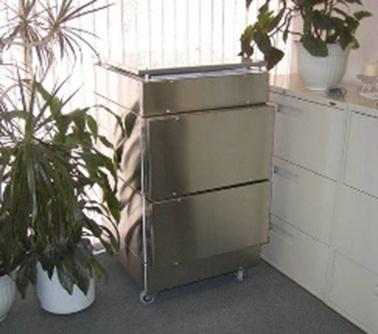 Fig. 8. Installation of the air purification unit for an office. 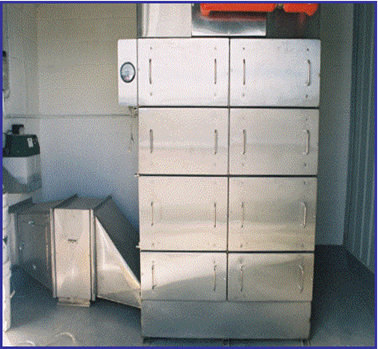 There are many sources of VOC emissions in indoor spaces such as from paints, finishes and furnishings. Characterisation of VOC emission from building contents have been studied [13]. Having a portable air purifier in a room is insufficient because occupants require outdoor air that brings in necessary oxygen. But the outdoor air is polluted and must be cleaned before brought inside. The aforementioned technologies (particulate filtration, photocatalysis media, and UV disinfection light) are brought together in several prototype units for testing its efficacy (figure 8) and installation (figure 9). The air purification unit can be scaled up to almost any size for whole building [14]. Future papers will discuss the results of testing these combined technologies and the potential synergetic relationships between them. Other studies found a nano-catalyst filter coated with manganese oxide-based nano-catalyst removed 100% of particle substances of cigarette smoke, such as nicotine and tar, converting those into water vapour and carbon dioxide. They also suggest great potential for converged with other technologies. [15]

The results of our testing is encouraging as the Central Chinese Government set a VOC limit for factory emissions and for offgassing of solvent-containing products. An environmental tax will be applied to VOC emissions such as coatings over this VOC limit. Different products with different VOC limits will be classified. There will be great demand for removal of VOC emissions.

An air purification unit that combines particulate filtration, VOC absorption, and germicidal properties using photocatalysis has proven effective in cleaning outdoor air brought inside or removing indoor air contaminants. Photocatalysis surpasses any other technologies in air purification (Table 2). Whereas other air purification technologies can remove air contaminants, there are waste by-products and replacement of the media. Activated charcoal is widely used but it quickly becomes saturated and must be replaced. Activated charcoal can be regenerated by baking off the VOC, but this process merely transfer the VOC that is captured by the activate charcoal to another location. The primary advantage of photocatalysis is that the by-product are benign and no waste as it converts the VOC contaminants to only carbon dioxide and water vapour.

One study found some air purifiers using photocatalytic oxidation may emits formaldehyde [16]. But our instruments do not detect any formaldehyde by-product.