Abstract: Kinetic studies were carried out for anaerobic digestion of distillery spent wash considering growth kinetic models due to Monod and Contois. The kinetic parameters were predicted with the help of previously published experimental data for anaerobically treated distillery spent wash. The digester was operated at seven different values of loading rates ranging between 0.954 to 2.459 gCOD/L/day. Maximum specific growth rate and maximum specific substrate utilization rate for Monod model have been predicted as of the order of 0.153 g/g/day

, respectively, and those for Contois kinetic model were found to be 0.140 g/g/day

, respectively. However, for both the models the decay rate coefficient,

was calculated as 0.0131 g/g/day. The estimated value of empirical constant

in Contois model was found to be order of 0.699 (dimensionless). The deviation of model predicted values from experimental results has been compared. Sensitivity analysis of the developed models was carried out by considering 10% increase in the values of both

Distillery wastewater generated from distillation of the alcohol (rectified spirit from analyzer column) which in fact, vary in composition depending on the kind of raw materials and type of fermentation process. In India fermentation is accomplished with cane molasses using yeast cell and Saccharomyces cerevisiae. The distillery spent wash is the waste generated from distillery based on cane molasses as raw material. The data reported on kinetic parameters of anaerobic treatment of distillery wastes including vinasses (waste generated after fermentation of molasses) are plenty [6-10]. However, microbial kinetic parameters required for design applications and estimation of treatment efficiency for digestion of spent wash based on cane molasses as raw material are scanty. Not any studies reported till date which describes the microbial growth kinetic coefficients for distillery waste based on Contois model for design applications. Large volume of data related to anaerobic degradation kinetics of sewage sludge and other wastes are available in literature [7,8].

The predicted values of the microbial growth kinetic parameters for different kind of wastes vary from waste to waste and depend on the source of waste generation, process conditions, the digester used for treatment and nature of inhibitory compounds present in the wastes. Study carried out for microbial growth kinetics for different types of wastes in complete mixed anaerobic digester operated at mesophilic temperature range. The kinetic parameters were estimated on the basis of mathematical modelling (by developing steady state model) for mixed community of microorganisms based on Monod kinetic model. These are discussed in the following paragraphs:

Bello-Mendoza et al. [1] reported the kinetic coefficient values for sewage sludge consist of maximum specific substrate utilization rate (8.0 g/g/day), yield coefficient (0.3 g/g), decay rate coefficients for acidogens (0.1 day-1) and for methanogens (0.015 day-1). Hu et al. [5] determined the kinetic coefficients for anaerobic contact digester treating ice-cream wastewater which comprised of yield coefficient (0.2116 g/g), empirical constant based on Contois model (0.4818) and half velocity coefficient (0.4028 g/L). The specific bacterial growth rates based on Monod as well as Contois model were found (0.7844 day-1) and (0.9207 day-1), respectively. For cattle waste the above kinetic coefficient was found to be order of 0.37 L/g, 0.30 g/L and 0.25 day-1, respectively. Borja et al. [8] estimated that the yield coefficient of microbial species degrading brewery wastewater is 0.08 g/g and specific substrate utilization rate 0.045 g/g/day. Based on Chen-Hashimoto model, Jimenez et al. [6] investigated on kinetics for untreated and previously treated vinasses where maximum production rate of methane was found to be 1.27 L/day and 0.891 L/day, respectively. The specific growth rate and half velocity coefficient for untreated waste were 0.87 day-1 and 0.90 g/L, respectively, and 0.09 day-1 and 0.13 g/L, respectively, for treated vinasses.

The aim of the present study is to predict the kinetic coefficient for distillery spent wash using the data reported by Borja et al. [11] for the developed models based on Monod and Contois kinetics and to compare them to describe the performance of complete mix anaerobic digester.

Steady state model has been developed for the estimation of the kinetic parameters for distillery spent wash based on sugar cane molasses as raw material. The experimental data was published in literature due to Borja et al. [11] was undertaken. The experiments were conducted under mesophilic conditions in continuous complete mix digester of volume 2.35 L operated at seven different loading rates ranging from 0.954 g/L /day to 2.4589 g/L/day. The influent substrate concentration fed to digester in the above experiment had COD level of 4.7 g/L. The laboratory data for spent wash could give the process efficiency in terms of COD removal and rate of methane production. This data fails to describe the inside conditions of the digester such as microbial kinetics, the growth and decay rate terms, specific growth rate and utilization rate of substrate by micro-organisms.

Mass balance equations have been applied across complete mix suspended growth anaerobic digester to derive a new set of equations based on organic loading rate variation. The microbial kinetics has been described by two steady-state models due to Monod as well as Contois. The developed kinetic rate expressions are based on the concepts proposed earlier by Tchobanoglous et al. [4]; Hu et al. [5].

2.1. Kinetic Modelling of Anaerobic Digester Based on Monod Kinetics

Based on Monod growth kinetics

and assuming the concentration of biomass in the raw spent wash feed to the digester is negligible, Eq. (4) becomes

Use of Monod kinetic model yields

With the help of Eq. (6) and also from Eq. (2), the developed equation can be written as

With the help of laboratory data kinetic parameters

can be predicted by linear regression

2.2. Kinetic Modelling of Anaerobic Digester Based on Contois Kinetics

Now, from Eq. (6) using Contois model [3] under steady state conditions the equation can be written as

Laboratory data can be used to predict kinetic parameters

3. Results and Discussion Based on Distillery Spent Wash

The kinetic parameters for Monod as well as those from Contois model for distillery spent wash have been estimated through the developed model as given in Section 2 and also with the distillery data mentioned in previously published research work due to Borja et al. [11]. The developed model (Eq. (3), Eq. (7) and Eq. (9)) are used to evaluate the microbial kinetic rates.

Figure 1 has been plotted between

as a function of

for the estimation of kinetic parameters

from Eq. (3) for spent wash based on Monod kinetics. From the slope of the straight line and the intercept the values of

, respectively, can be predicted. 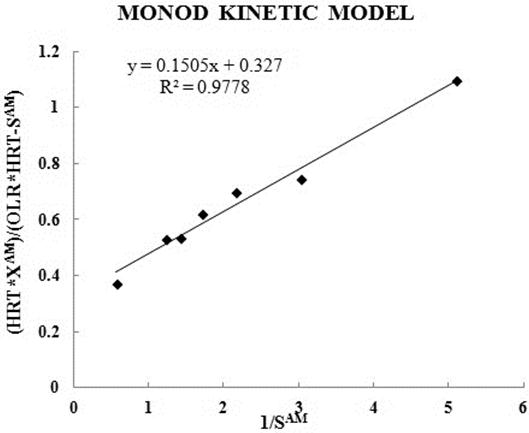 , for distillery spent wash based on Monod growth kinetic model.

Figure 2 has been drawn

for the estimation of

can be evaluated by least square fit. 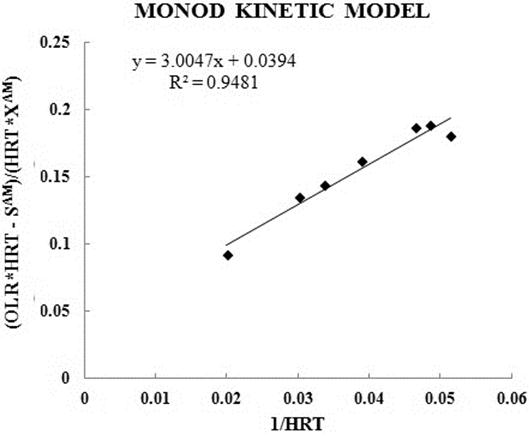 , for distillery spent wash based on Monod growth kinetic model.

For the prediction of kinetic parameters

based on Contois growth kinetics from Eq. (9), plot

as shown in Figure 3. With the help of linear regression method the values of 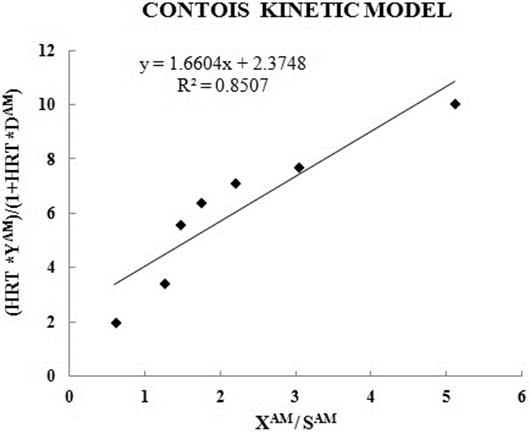 , for distillery spent wash based on Contois kinetic model.

3.2. Deviation of the Model Predicted Values of, , from Experimental Data

The formulae used for prediction of effluent substrate concentration (

) based on Monod growth kinetic model was obtained by rearranging Eq. (3) and Eq. (9), respectively.

) from the experimental values due to Borja et al. [8] for both Monod and Contois models has been plotted with the help of estimated kinetic parameters. These are shown in Figure 4 based on Monod model whereas Figure 5 is plotted for Contois model. From Figures 4 and Figure 5, the R2 values are found of the order of 0.8751 for Monod whereas the same for Contois model 0.9323. The percentage deviation for both the models is found below 12.5%. However, it is observed that Contois model fits the experimental data better for spent wash, indicating its superiority over the other models. Hence, model developed based on Contois model can suitability be used for spent wash. 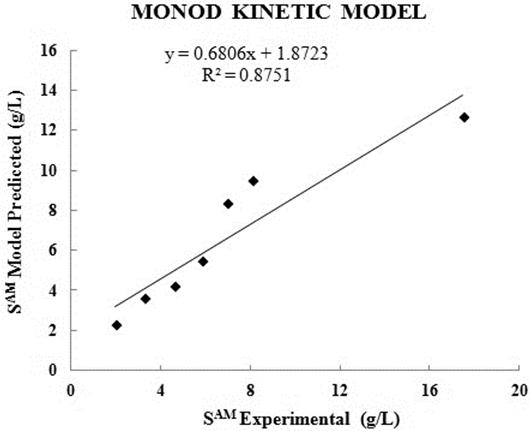 Figure 4. Comparison between the model predicted values of 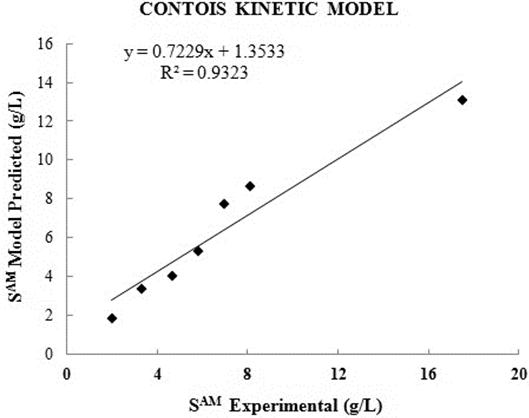 with the experimental results for distillery spent wash based on Contois kinetic model.

Sensitivity analysis is essential for analyzing accuracy of the data whether it is experimental or model predicted. Therefore, attempts have been made to carry out the sensitivity analysis by varying the values of maximum specific growth rate coefficient,

, for both the models (Monod and Contois) and their effects on COD concentration in effluent (

for both the models are estimated. Figure 6 through Figure 9 represent the model predicted

values as function of HRT for Monod model and organic loading rate (OLR) for Contois model. The 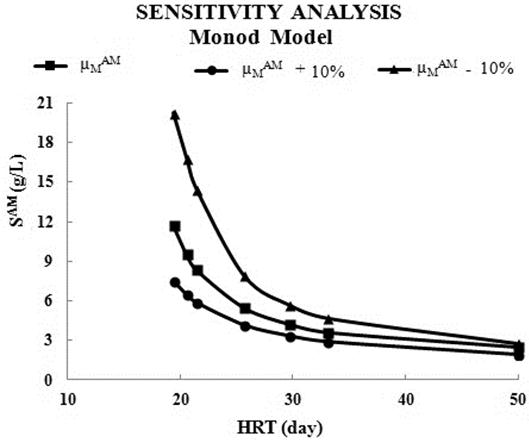 value and its effect on effluent substrate concentration,

as function of HRT for distillery spent wash based on Monod model. 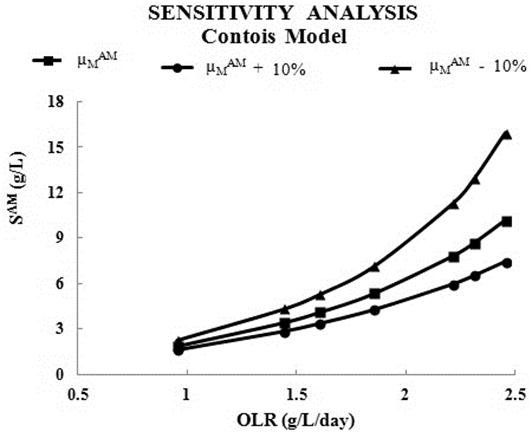 and its influence on effluent substrate concentration,

as function of OLR for distillery spent wash based on Contois model.

as shown in Figure 6 is found to decrease with the COD in effluent resulting in higher efficiency. From the Figure 6 it is also observed that if the growth kinetics is assumed to be inhibited under any shock loading condition (10% decrease in

). Under this situation, lower COD removal efficiency is obtained as compared to other two cases (10% increase in

and at constant value of

). At the hydraulic retention time of 50 day, COD removal percentage is found to be 94.88%. Increasing

The same condition has been applied for Contois model and is plotted in Figure 7. At the OLR of 1.606 g/L/day, increasing

by 10% decreases the same from 91.39% to 88.91%. From this study it can be concluded that if the microbial growth rate decreases there is significant effect on process performance in terms of COD removal. Again simulation studies have been carried out considering the combined effect of both

on COD removal by varying 10% of the values as shown in Figure 8 and Figure 9.

Figure 8 has been plotted between

as a function of HRT whereas Figure 9 as a function of OLR. It is well known fact that as the growth rate of microbial species increases there is also simultaneous increase in decay rate of microorganisms. By considering these aspects process performance has been predicted by considering combined effect of both the variables. As shown in Figure 8 based on Monod model if both the kinetic parameters increases by 10%, the percent COD removal increases from 88.61% to 90.46% at the retention time of 25.7 day. Reduction in percent COD removal from 88.61% to 85.13% has been observed at the same retention time on decreasing both the variables by 10%. Figure 9 represents the variation in terms of

By performing sensitivity analysis, the importance of the process variables and its effect on process performance can be evaluated. Also methods are to be devised for enhanced performance by controlling the inhibitory substances that effect microbial survival. 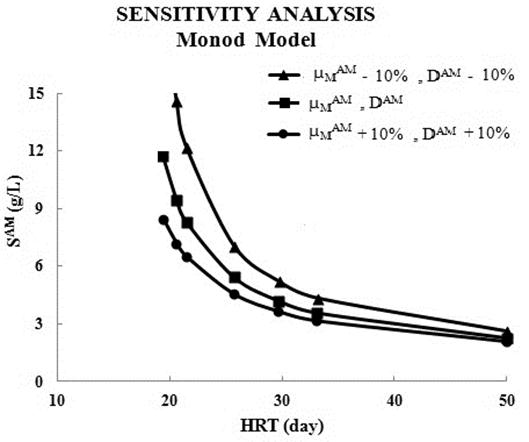 , and their combined effect on

for distillery spent wash based on Monod model. 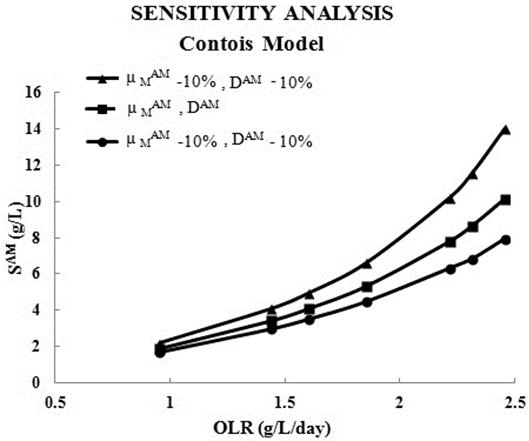 , and their combined effect on

for distillery spent wash based on Contois model.

Table 2 represents the confidence interval level of the values predicted from model equations. Student t-distribution method has been adopted for the above estimation [19, 20]. Three different probability levels, 90%, 95% and 99% were selected for estimation of

values for both Monod as well as Contois model.

from derived equations for distillery spent wash based on Monod as well as Contois growth kinetic models.

From the above analysis the following noteworthy conclusions can be drawn:

• For spent wash the developed steady state model equations fits well for analyzing performance of anaerobic digestion. Statistical analysis reveals that Contois model is found to be more suitable (with higher R2 value of 0.9323) in this type of waste. Confidence interval for

This work has been supported by Ministry of Human Resources and Development (MHRD), Government of India.