The interest for producing chemicals from abundant, renewable and low-cost lignocellulosic materials has been increased in the last decade. Biomass residues available from agricultural and forest processing constitute a potential source for production of different chemicals using enzyme or acid catalyzed hydrolysis [18]. Pentosan is one of the important components belonging to hemicelluloses group. In all kinds of fibers of vegetable origin, this group consists of pentacyclic carbohydrates of varying molecular weights with varying degree of polymerization. The unit carbohydrates belonging to this group are termed as pentoses-the monosachharides consisting of D-xylose, D-arabinose, L-arabinose and ribose. Xylose and arabinose are predominant in all natural fibers. The pentosans or pentoses are the major sources of value added products such as Furfural and Hydroxyl methyl furfural which are used in pharmaceutical as well as fuel additives. Furfural is produced by the hydrolysis of xylan rich plant residues. All pentosan containing fibrous materials could be used as raw material for furfural production [18]. Pentosans are also source of bioethanol which can be the major oil substitute in the whole world. The pentosan content in different raw materials is varying from non-wood and wood based fibrous materials. Actually the pentosan content of any fibrous material depends upon the species of that material and the place where it is found. The average pentosan contents of different raw materials are shown in table (1). As shown in table (1), Corn cob has maximum average content of pentosan ranging from 30-40%. Green bamboo, Eucalyptus hybrid has very less pentosan content ranging from 14.50-17.50% and 14.20-15.20% respectively. Non-wood fibrous materials such as rice straw, wheat straw, barley straw, oat straw, rye straw, sugar cane, esparta grasses, sabai grasses, kenaf, jute etc. have higher pentosan content than hardwoods. Coniferous (softwoods) and deciduous (hardwoods) have pentosan content ranging from 7-14% and 19-26% respectively [12]. Attempts have been made by various investigators to produce pentoses and furfural in laboratory as well as in pilot scale. For pentosan removal from different lignocellulosic materials different researchers have been used different acids such as HCl [10], H2SO4[1,22], H3PO4 [29] as catalysts and different metallic catalysts such as ZnCl2, SnCl2, AlCl3, CaCl2 [6] as promoters. Steam treatment (water prehydrolysis at higher temperature) without any acid catalyst is also used for pentosan removal [9, 16]. Concentration of prehydrolyzing agent, process temperature, liquid to solid ratio and reaction time are main process variables in process of pentosan removal [19]. Liquid to solid ratio did not have very much effect on pentosan removal [9]. In this work experimental data had been taken for analysis from previously published work by different authors. In work of X. Luo et al. [16], green bamboo chips had been used for steam pretreatment. Green bamboo chips heated to different temperatures and maintained here for 0-70 min. The pentosan contents of bamboo chips after steam treatment were determined according with the TAPPI standard (T 223cm-01, 2001). In work of Guha et al. [9], water prehydrolysis of eucalyptus wood chips has been studied. Prehydrolysis conditions were as temperature-150°C, liquor material ratio 5:1, time to obtain maximum temperature -90 min., reaction time at maximum temperature-60 min. In work of Bains et al. [2], hydrolysis of rice straw has been taken place by sulphuric acid. Prehydrolysis conditions were as bath ratio -4:1(Liquor to material), reaction temperature-130°C, time to obtain maximum temperature -40 min., reaction time at maximum temperature-2 hrs. In work of Mittal et al. [19], prehydrolysis of bagasse was carried out at different concentrations of sulphuric acid varying from 0.12% to 1.25%. In this work prehydrolysis conditions were as liquor to material ratio-5:1, time taken to reach maximum temp.-90 min. and time of reaction at that temperature - 90 min.

2. Kinetics of Hydrolysis of Biomass

Many researchers [1, 5, 16, 30] have discussed pentosan hydrolysis kinetics. The mechanism for the hemicellulose (especially pentosan) hydrolysis is not accurately modeled because of its complex structure and inability to analyze degradation products completely [16]. Till now, the most studies of pentosan hydrolysis are based on the hypothesis of pseudo-homogenous irreversible first order kinetic equation, although this simplified model do not take into account the formation of monosaccharides and other possible products. In this study a suitable model for pentosan removal is developed from the help of given data by some researchers [2,9,16]. The biomass prehydrolysis reaction is a complicated heterogeneous solid-liquid reaction. The whole prehydrolysis reaction involves following steps as described by Bhattacharya et al. [3].

(1)  The hydrolyzing agent transports from the bulk liquid to the film surrounding the biomass.

(2)  Diffusion of hydrolyzing agent through the film.

(3)  Diffusion through the biomass to the reaction sites.

(5)  Reaction products follow the reverse path out of the biomass.

contains the temperature effect along the reaction.

By plotting equation (4) between

for reaction. This method is called differential method of analysis of reaction data described elsewhere [14]. 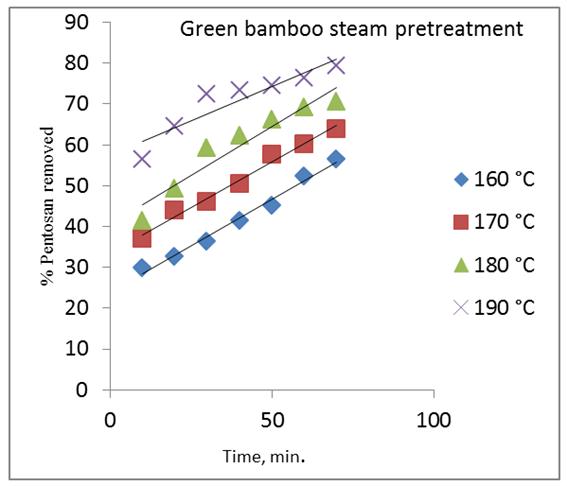 Figure 1a. Effect of time and temperature on removal of Pentosan. Data taken from X. Luo et al. [16]. 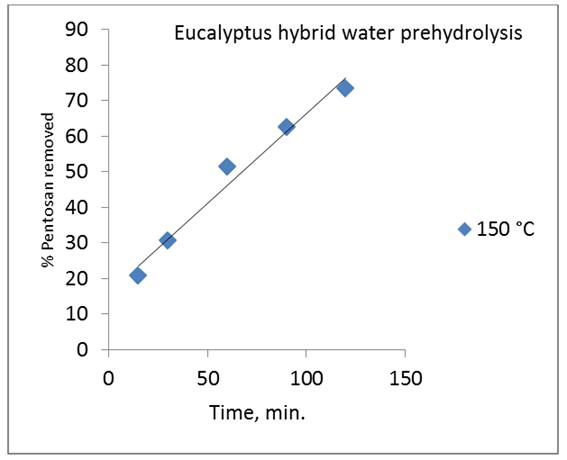 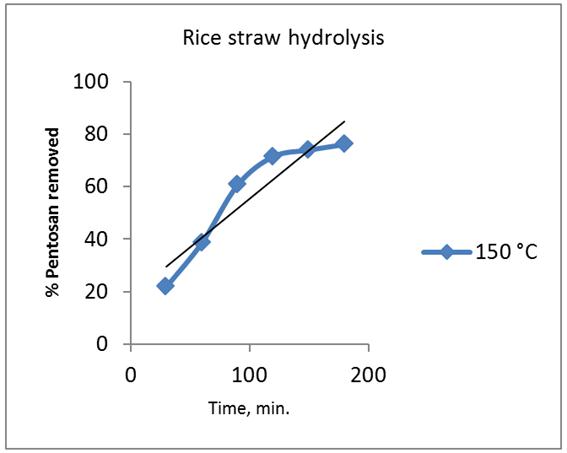 with R2 = 0.975. In work of Guha et al. [9] degradation of only main pentosan occurs. It is concluded after study of work of Guha et al. [9] and X. Luo et al. [16] that without using any catalyst and steam pretreatment of biomass till temperature of 180°C, removal of only main part of pentosan takes place. Fig. 1(c) represents work of Bains et al. [2] in which rice straw was hydrlolysed using sulphuric acid. Fig.1c clearly shows that as time increases, the rate of pentosan removal decreases. In their work Bains et al. [2] has shown removal of both parts of pentosan. For initial phase of reaction when main pentosan removes correlation is

with R2= 0.994 and for later phase when the degradation of residual pentosan takes place, the correlation is 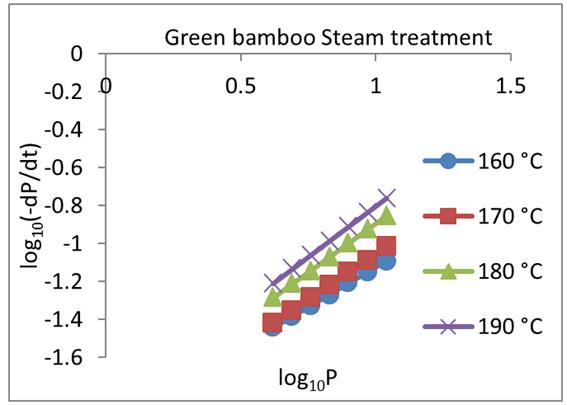 Figure 2a. Variation of logarithm of rate of pentosan removal and logarithm of unreacted remaining pentosan. Data is taken from X. Luo et al. [16]. 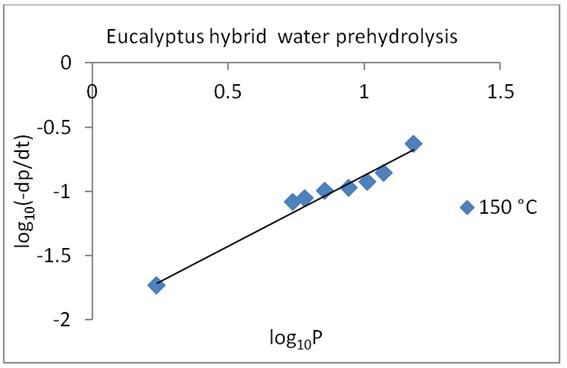 Figure 2b. Variation of logarithm of rate of pentosan removal and logarithm of unreacted remaining pentosan. Data is taken from Guha et al. [9].

Figure 2c. Variation of logarithm of rate of pentosan removal and logarithm of unreacted remaining pentosan. Data is taken from Mittal et al. [19].

In table (3), Kinetic equations for steam pretreatment of Green Bamboo according to work of X. Luo et al. [16] are summarized with R2 values. At higher temperature shifting of order of reaction is observed. The shifting of order during biomass prehydrolyis reaction is also observed by some other researchers [5, 30]. According to Fig. 2b, pentosan removal from Eucalyptus hybrid at 150°C hydrolyzed with water has kinetic relation as

with R2 = 0.98. So order of pentosan removal in this case is 1.1 and reaction rate constant

with R2 = 0.97 and for low pentosan content region the kinetic equation is

value for high pentosan content region is 0.0755min-1 and for low pentosan content region is0.0161 min-1. Wilder et al. [31] had taken data from Walter et. al. [30] and shown that pentosan removal follows zero order kinetics. In present study the data of Walters [30] was analyzed and found that at higher temperatures pentosan removal follows order of shifting. Following table (4) has shown the kinetic equations obtained from Walters data [30] in present study. 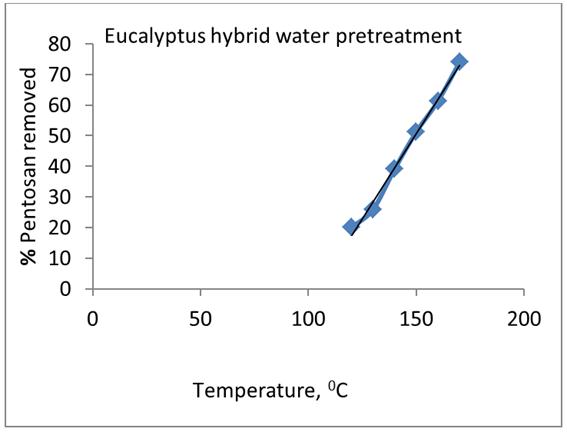 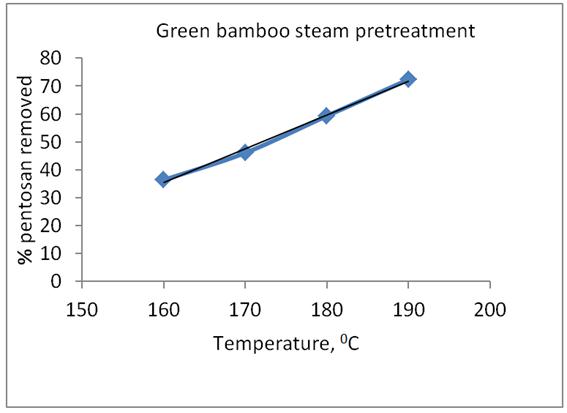 According to Fig. 3a, % pentosan removed vs. temperature relationship is given as

with R2 = 0.993. According to Fig. 3(c), the work of Bains et al. [2] shows that % pentosan removal and temperature relation is of irregular type. A correlation for this data is as

Arrhenius equation is given by,

should yield straight line of slope

with pre-exponential factor and activation energies are summarized here. 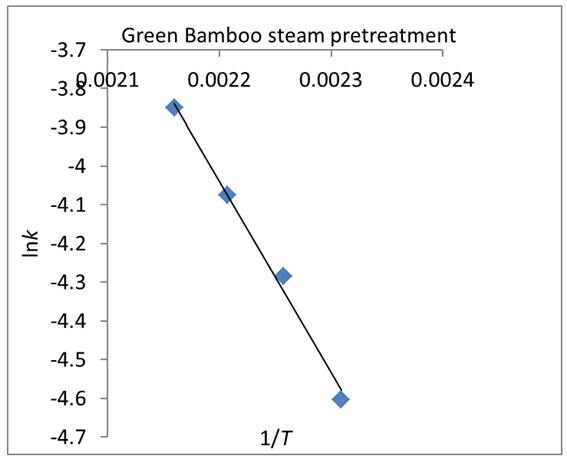 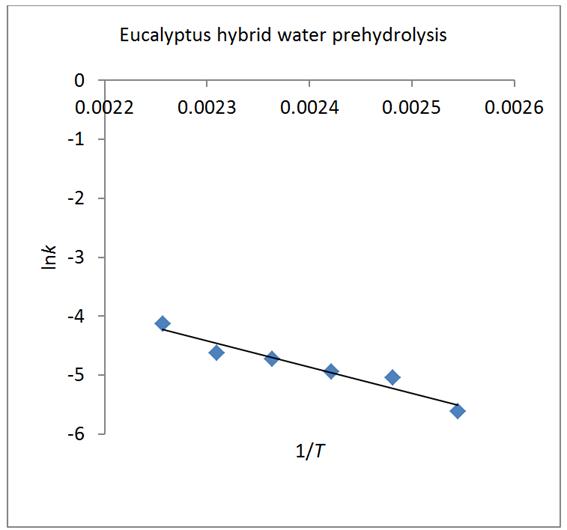 Figure 4b. Relationship between lnk and 1/T. Data taken from Guha et al. [9]. 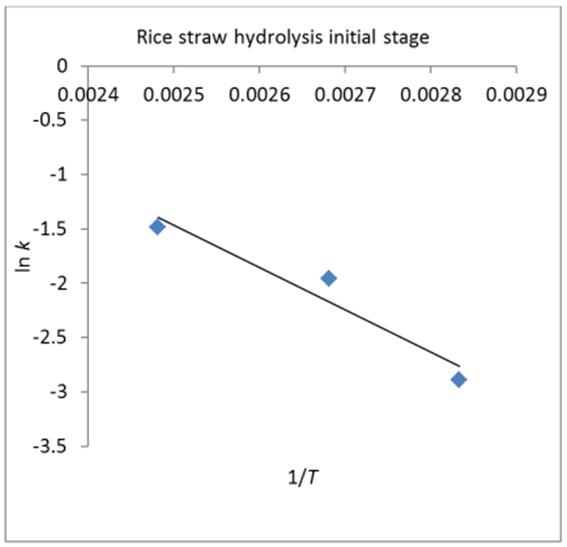 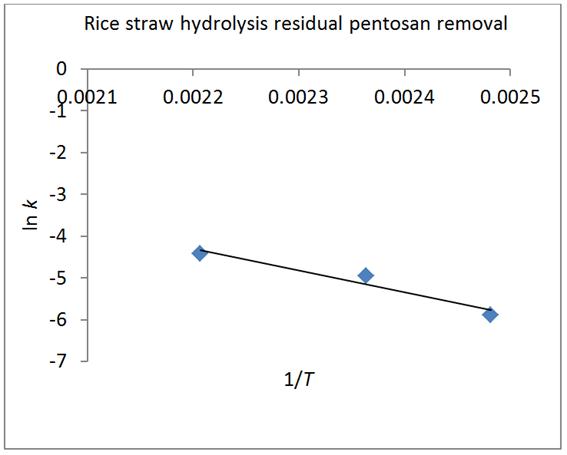 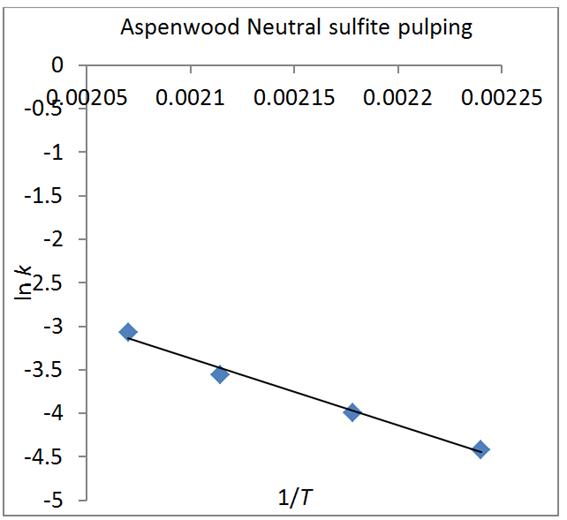 . Findley et al.[5] performed experiments on Red maple (Acer rubrum) and found that log-log plot of reaction rate vs. remaining pentosan resulted in a series of straight lines but the slopes of these lines varies with cooking conditions. They have indicated that pentosan removal follows two first order reactions, one is rapid and other is slow but they could not gave any indication that these reactions are parallel or consecutive. The reaction constants of these two reactions vary with temperature. According to Arrhenius equation the range of these two reaction constants are

. Activation energy represented by Findley et al. [5] for these two reactions are 294.315 and 209.512 KJ/mol which are very high than other reported values by other authors. X. Luo et al. [16] assumed that pentosan removal follows pseudo-homogenous first order kinetics and reported pre-exponential factor 4331 and activation energy 48.06 KJ/mol. In present study these values are found different than these reported values. 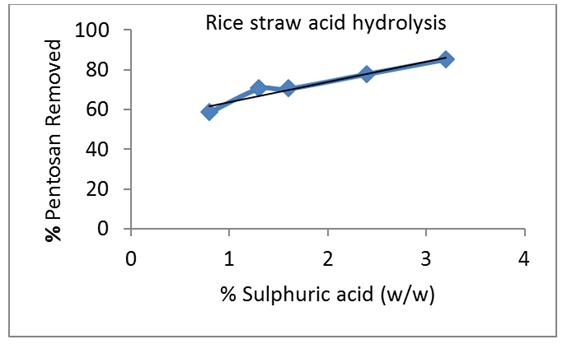 Figure 5a. Effect of acid strength on pentosan removal. The data taken from Bains et al. [2]. 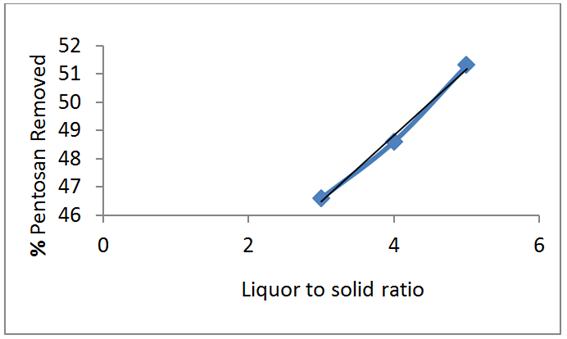 Figure 5b. Effect of liquor to solid ratio on pentosan. The data taken from Guha et al. [9].

According to Fig.5a, % pentosan removed vs. sulphuric acid plot had been drawn according data taken from Bains and coworkers [2]. The regression relation is written as

A non-linear regression model has been developed using Levenberg-Marquardt (LM) algorithm for finding the % pentosan removed in biomass steam pretreatment process for different time and temperatures. The objective function that is minimized is the sum of squares of the errors. To develop this model data is taken from Guha et al. [9] and X. Luo et al. [18]. The non-linear model is as follows…..

The values of Different parameters and statistical parameters of this model are as tabulated in Table (6) & (7) respectively. 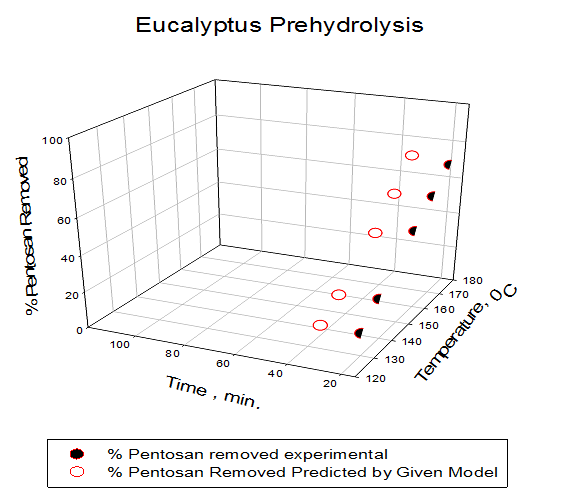 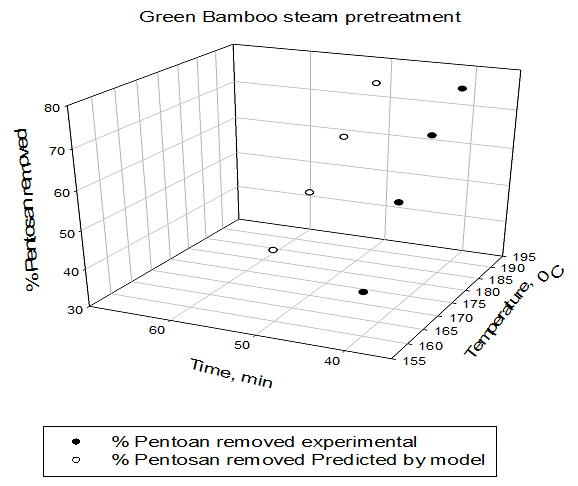 Figure 6a. 3-D scatter plots showing % pentosan removed with different time and temperatures for Eucalyptus and Green bamboo steam pretreatment. The values obtained by experiments as well as from given model are in very good agreement with each other. 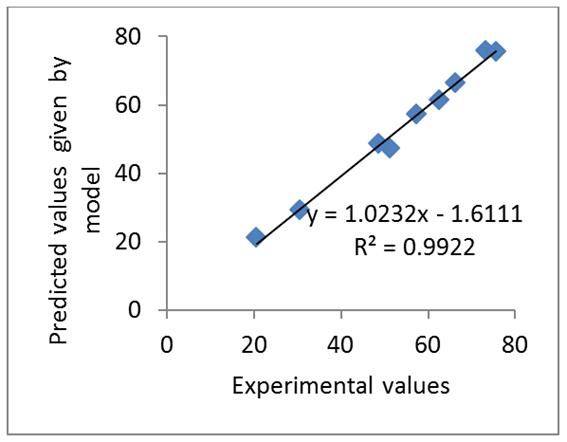 percentage pentosan removed (based on total initial pentosan in material)