Use of Hydrous Manganese Oxides Nanopowders as a Potential Sorbent for Selective Removal of Nickel Ions from Industrial Waste Water, Kinetics and Isotherm Studies

Abstract: Hydrous Manganese Oxides Nanopowders as nano adsorbent (MONs) was synthesized and characterized by X-ray diffraction (XRD), scanning electron microscopy (SEM), and transform infrared spectroscopy (FT-IR). The adsorption of Ni (II) ions from aqueous solution on the MONs was investigated with variations in contact time, pH, initial Ni (II) concentration and adsorbent dosage. The results showed that the adsorption of Ni (II) onto MONs increased within 25 min and reached equilibrium gradually and removal percentage were 83%, 57%, 42% and 35% for 25 ppm, 50 ppm, 75 ppm and 100 ppm Ni (II), respectively, by using 1g/l MONs for 90 min at pH 6. The adsorption behavior of Ni (II) onto MONs was best described by the pseudo-second-order model and Freundlish isotherm. The results also indicated that the type of adsorption involved in this study is physiosorption (physical sorption) which usually takes place at low temperature. The results also revealed that MONs was a promising adsorbent for removal of Ni ions from industrial wastewater.

Water contamination with toxic heavy metals from the industrial wastewater activities have become a serious environmental and public health problem. With the rapid increase of global industrial activities, heavy metal pollution on water resources is considered a hazardous effect on human beings [1–3].

Heavy metals found their ways to the environment through wastewater streams of the modern industrial activities such as batteries, pesticides, fertilizer and paper industries, metal plating, and mining operations [4-5].

Contamination of waste water with heavy metals has got great attention since they are known to be toxic and non-biodegradable [6].

Many treatment methods have been reported in the literatures which can be used to remove heavy metals from aqueous solutions. Among these methods are; the chemical precipitation, ion exchange, coagulation and electrochemical removal, but these methods led to high-energy requirements, and production of toxic sludge [7].

Other methods such as solvent extraction, biological, photo catalysis and adsorption are utilized to remove metal ions from aqueous solutions. Among of all these methods, adsorption was found to be the most effective method [8].

The adsorption process is affected by the characterizations of the adsorbent materials such as the surface morphology, adsorbent surface area, the pore volume, particle size distribution and functional groups attached to the adsorbent surface [9]. Huge numbers of adsorbents have been reported in several recent studies including activated carbon [10-15], synthetic polymers [16-19] and silica-based adsorbents [20]. These types of adsorbents suffer from intra-particle diffusion which decreases the adsorption rate due to the size of adsorbents. To overcome this limitation, preparation of nanoadsorbent has taken place. These nanoadsorbents have small diffusion resistance that increased the importance of using nanoparticles as adsorbent [21].

Many recent studies for the adsorption of heavy metals from wastewater have been taken place. The most widely studied nano metal oxides include iron oxides, manganese oxides, aluminum oxides, CuO, NiO, ZnO and TiO2 [25-31].

In the present work, the synthesis of Nano manganese oxides (MONs) was studied. The prepared MONs was characterized with scanning electron microscope, a surface area analyzer, and X-ray diffraction. The prepared MONs was used for the removal of Nickel from simulated wastewater. The effects of different parameters such as contact time, adsorbent dosage, and solution pH have been studied. Further, the adsorption of nickel from aqueous solution was studied kinetically to explore and understand the adsorption mechanism.

2.1. Preparation of the Nano Adsorbent

0.598 g of MnCl2. 4H2O and 30 ml of EA were loaded into a beaker and stirred with magnetic stirrer for 25 minutes untill MnCl2. 4H2O was completely dissolved and forming a clear brown solution. Then 30 ml of distilled water was added to the resulting solution and the solution was stirred at room temperature for 5 hours. The clear brown mixture turned to a dark brown suspension. The resulting suspension was then centrifuged at 7000 rpm for 7 min to separate the dark brown precipitate which is washed thoroughly with Ethanol. The prepared dark brown precipitate was dispersed into solvents various organic solvents such as hexane, octane and toluene. The mixture was allowed to stand in air at room temperature then in an oven at 40 – 100 ºC for 5 hours.

Equilibrium isotherms for Ni (II) were obtained by performing batch adsorption studies. Solutions of 50 mg/L concentration were adjusted to optimum pH values and adsorbents amounts ranging between 0.05 and 0.4 g were added to solutions.

In order to optimize the pH for maximum removal efficiency, experiments at 25°C were carried out by taking into contact 100mL of 100 ppm Ni (II) solution with 1g/l of Mn oxides nano powder and contact time (30 min) was kept constant by stirring and adjusting continuously the solution pH with HCl and NaOH solutions at different pH (2, 4, 6 and 8).

Morphological analysis of Mn Oxides nano powder were performed by scanning electron microscopy (SEM) in order to show the major features and morphology of the metal oxide powders. The morphological appearance is shown in Figure 2 and Table (1), it can be seen that the product particles are uniformly distributed and mainly composed of spherical particles with 20 nm of average grain size. 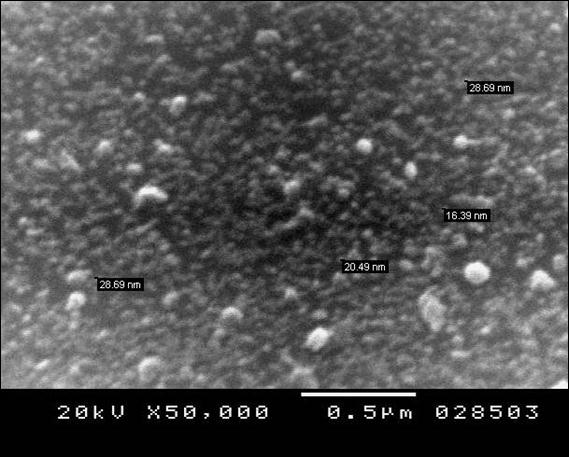 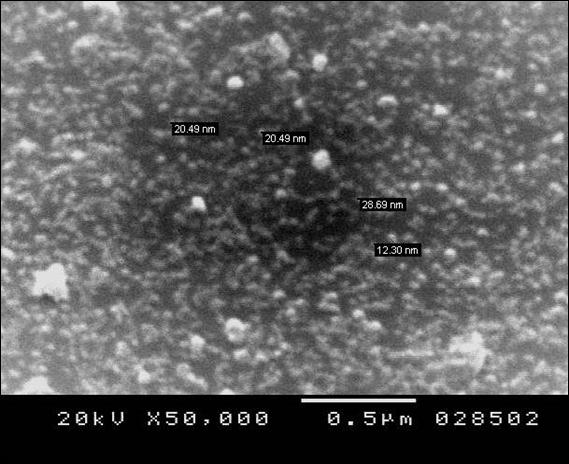 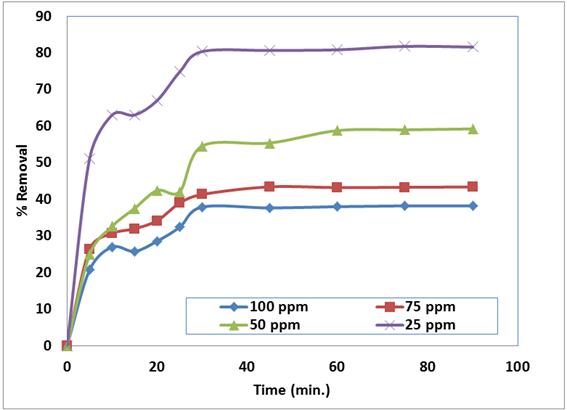 Figure 4. Effect of contact time on the adsorption capacity of (Mn Oxides nano powder) for Ni ions at different concentration and pH is 6, adsorbent dosage is 1g/l and Temperature is 25°C.

The acidity of solution (pH) is one of the most important parameters controlling uptake of heavy metals from aqueous solutions. Figure 5 describes the effects of pH on adsorption capacity of Ni (II). The adsorption of Ni (II) was found to be incresed as pH increased till reached 8. This results show good agreements with [34]. 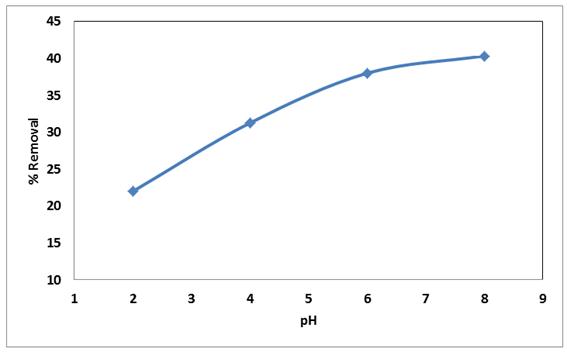 The results of the experiments with varying adsorbent dosage are presented in Figure 6. It was found that with an increase in the adsorbent dosage from 1 to 3 g/L, the% removal of Ni (II) increased from 37% to 63% in the batch reactor. 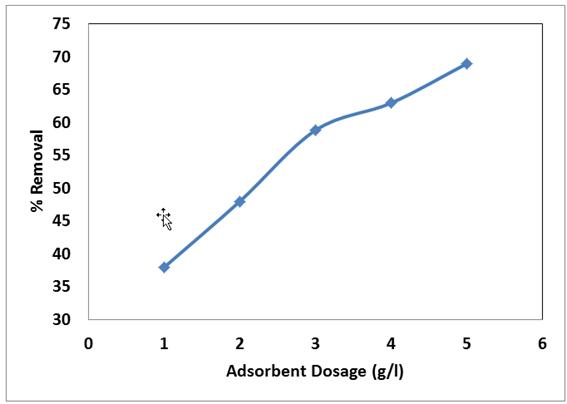 The most widely accepted surface adsorption models for single-solute systems are the Langmuir and Freundlich models.

The adsorption data was tested using Langmuir isotherm equation in the linearized form:

Where Ce is the equilibrium concentration of the Ni (II) in solution (mg L-1), qe is the adsorption capacity at equilibrium (mg g-1), b (L mg-1) Langmuir constants, related to the binding constant and qmax (mg g-1) is the maximum adsorption capacity. A plot of specific sorption (Ce/qe) versus Ce gives a straight line of slope (1/qmax) and intercepts (1/qmax b) as given in Table 2.

The Freundlich isotherm is commonly given by the following non-linear equation:

Where KF is a Freundlich constant; related to the bonding energy. KF can be defined as the adsorption or distribution coefficient and represents the quantity of Ni (II) adsorbed onto adsorbent for unit equilibrium concentration. 1/n indicates the adsorption intensity of Ni (II) onto the sorbent with surface heterogeneity, becoming more heterogeneous as its value gets closer to zero. Eq. (3) can be linearized according to the logarithmic Eq. (4) and the Freundlich constants can be determined:

The applicability of the Freundlich sorption isotherm was analyzed, using the same set of experimental data, by plotting log (qe) versus log (Ce). The data obtained from the linear Freundlich isotherm plot for the adsorption of Ni (II) on Mn Oxides nano powder is presented in Table 2. The correlation coefficients reported in Table 2 showed strong positive evidence that the adsorption of Ni (II) onto Mn Oxides nano powder follows the Freundlich isotherm for 100ppm Ni (II) concentration.

Where B is a constant related to the adsorption energy (mol2 J2), Qm the theoretical saturation capacity (mg g-1), ε the Polanyi potential, calculated from Eq. (7).

The slope of the plot of lnqe versus ε2 gives B (mol2 (kJ2)−1) and the intercept yields the adsorption capacity, Qm (mg g−1). The mean free energy of adsorption, E (kJ mol-1), defined as the free energy change when one mole of ion is transferred from infinity to the surface of the solid from the aqueous phase in the solution, was calculated from the B value using the following relations [36]:

The adsorption kinetic data were described by the Lagergren pseudo-first-order model [41] which is the earliest known equation describing the adsorption rate based on the adsorption capacity. The linear form equation is generally expressed as follows:

In order to obtain the rate constants, the values of ln (qe−qt) were linearly correlated with t by plot of ln (qe−qt) versus t to give a linear relationship from which K1 and predicted qe can be determined from the slope and intercept of the plot, respectively.

The adsorption kinetic may be described by the pseudo-second order model. The linear equation is generally given as follows:

If the second-order kinetics is applicable, then the plot of t/qt versus t should show a linear relationship. Values of K2 and equilibrium adsorption capacity qe were calculated from the intercept and slope of the plots of t/qt versus t. The linear plots of t/qt versus t show good agreement between experimental and calculated qe values (Table 3). The correlation coefficients for the pseudo second-order kinetic model are greater than 0.99, which led to believe that the pseudo second order kinetic model provided good correlation for the adsorption of Ni (II) onto Mn Oxides nano powder.

The adsorbate transported from the bulk solution phase to the internal active sites occurs in several steps, where the rate of internal mass transfer is in most cases the rate-determining step in adsorption processes. Kinetic data were used further to check the possibility of intra-particle diffusion by using the Weber and Morris equation expressed by the following equation;

where qt (mg g-1) is the amount of adsorbed Ni (II) at time t and kd is the intra-particle diffusion rate constant (mg g-1 min-0.5), and c is a constant determined from the intercept. If the plot of qt versus t0.5 gives a straight line passing through the origin, then the adsorption process is only controlled by intra-particle diffusion, if multi-linearity in qt vs. t1/2 plot is considered (that is, two or three steps are involved to follow the whole process) Figure 7 shows that the external surface adsorption occurs in the first step; the second step is the gradual adsorption step, where intraparticle diffusion is controlled; and the third step is the final equilibrium step, where the solute moves slowly from larger pores to micropores causing a slow adsorption rate. 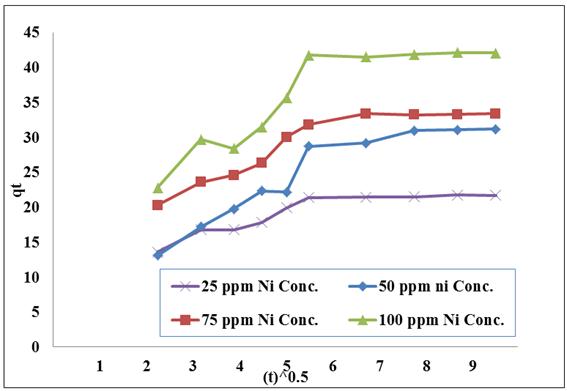 Mixture of Manganese Oxides Nanopowders as nano adsorbent (MONs) was synthesized and characterized by X-ray diffraction (XRD), scanning electron microscopy (SEM), and transform infrared spectroscopy (FT-IR). It has been used for removal of Ni (II) ions from aqueous solution. The results showed that the maximum adsorption capacities of Ni (II) onto MONs were 35 mg/g. The adsorption behavior of Ni (II) onto MONs was best described by the pseudo-second-order model and Freundlish isotherm. The results also indicated that the type of adsorption involves in this study is physiosorption (physical sorption) and the external surface adsorption occurs in the first step; the second step is the gradual adsorption step, where intraparticle diffusion is controlled; and the third step is the final equilibrium step, where the solute moves slowly from larger pores to micropores causing a slow adsorption rate. The results also revealed that MONs is a promising adsorbent for removal of Ni (II) from industrial wastewater.