Abstract: Catalytic technique of lignin derived bio–oil conversion, has been studied over Pt–γAl2O3 catalyst in a fixed–bed tubular micro–activity flow reactor at 673 K, 14 bar and space velocity 3 (g of Anisole)/(g of catalyst × h), in the presence of H2. A reaction network according to selectivity–conversion data is proposed to describe the evolution of products observed. The reactions include the following, anisole to benzene via HDO, to hexamethylbenzene via hydrodeoxygenation and alkylation, to phenol via hydrogenolysis, to 2–methylphenol via transalkylation and finally to 2, 4–dimethylphenol, 2, 4, 6–trimethylphenol and 2, 3, 5, 6–tetramethylphenol via transalkylation and alkylation. Experimental results indicated that the anisole conversion decreases about 20% with increasing the pressure from 8 to 14 bar at 673 K.

To begin to meet the needs for renewable fuels, many researchers have turned their attention recently to a massive resource that today finds few applications: lignin [1, 2]. Bio−oils derived from lignin are poor fuels, being unstable and having undesirable physical properties, and so they require upgrading. A potentially valuable processing goal is to convert lignin to bio−oils and to subject the bio−oils to hydrodeoxygenation (HDO), a chemical conversion that takes place at high H2 partial pressures (as high as 100–200 bar) and high temperatures (250–400°C) to remove oxygen primarily in the form of water [2-7]. Oxygen−containing products, in addition to water, include CO2, formed in decarboxylation reactions, CO, and methanol. The upgrading classes of reactions include decarboxylation, hydrogenation, hydrogenolysis, hydrocracking, and dehydration [8-10]. Experimental investigations of anisole conversion with various catalysts have led to the inference that specific catalyst functions are responsible for specific reaction pathways. This work considers the potential use of lignin−derived bio oil as possible renewable fuel and chemical feedstock source.

Anisole is representative of bio−oils compounds that incorporate Cmethyl–O–Caromatic moieties—which are prevalent in lignin as well as lignin−derived bio−oils. In the HDO of anisole, four reaction pathways—demethylation, hydrogenation, hydrogenolysis, and methyl group transfer (transalkylation)—occur, not all of them leading to the removal of oxygen. Because the Cmethyl−O bond is weaker than the Caromatic−O bond, demethylation via the rupture of the Cmethyl−O bond is typically favored kinetically [11-13].

The catalytic species that accelerate the HDO reactions include metals, metal sulfides, metal phosphides, metal carbides, and metal nitrides. These have been used on various supports, and in general the acidic supports catalyze methyl group transfers and also lead to catalyst deactivation by carbonaceous deposits (coke) that form on their surfaces.

Experimental investigations with various catalysts have led to the inference that specific catalyst functions are responsible for specific reaction pathways. Runnebaum et al. [14] reported that a noble metal (platinum) catalyzes phenol formation, and phenol is subsequently converted to benzene by breaking of the Caromatic–O bond and then to cyclohexane by hydrogenation of the aromatic ring, which is followed by hydrogenolysis of the Calicylic–O bond. Transalkylation was found to be kinetically significant when the catalyst contained an acidic function, such as γ–Al2O3 serving as the support [14].

Ardiyanti et al. [8] investigated the catalytic hydroprocessing of anisole with monometallic and bimetallic catalysts (Ni–Cu supported on δ–Al2O3) and observed that the bimetallic catalyst had a higher activity than a monometallic nickel catalyst. Li et al. [11] considered the conversion of anisole catalyzed by Ni2P/SiO2 and MoP/SiO2, as well as NiMoP/SiO2 with various Ni/Mo ratios, and they found that the nickel phosphide–containing catalysts, especially Ni2P/SiO2, are more active than conventional NiMo/γ–Al2O3. They concluded that the activity and stability of the phosphide catalyst increases with increasing Ni/Mo ratios.

Yang et al. [13] considered the influence of supports of nickel–containing catalysts on selectivity in anisole HDO, finding that reducible oxide supports such as TiO2 and CeO2 give high selectivities to aromatic products; they found an increasing trend for formation of benzene over cyclohexane in the series Ni/C, Ni/Al–SBA–15, and Ni/γ–Al2O3. They attributed this trend to carbon deposits on nickel sites that reduced the hydrogenation activity, favoring aromatic formation instead. In related work, Huuska [15] investigated the effects of catalyst composition on the hydrogenolysis of anisole on molybdenum and nickel catalysts. They observed that when the catalysts were supported on an acidic oxide the main products were phenol and methyl–substituted phenols—because methyl group transfer is catalyzed by acidic sites. In contrast, when the support was not acidic, only limited methyl group transfer occurred, and the main products were phenol and cyclic hydrocarbons. In an investigation of anisole HDO catalyzed by mesoporous silica (SBA–15 and SBA–16)–supported CoMoW catalysts, Loricera et al. [16] represented the benefits of the high support surface area and the opportunities to vary the framework compositions.

The literature of catalytic HDO has been reviewed recently [2]; it includes numerous reports characterizing the conversion of whole bio–oil feedstocks, but there is a lack of fundamental understanding of the reactions. In present study, the catalytic upgrading of anisole to valuable chemicals in the presence of H2 over platinum supported on alumina (Pt/Al2O3) is studied, regarding anisole as an excellent compound to represent lignin−derived bio−oils.

Catalytic reaction experiments were carried out with a fixed–bed tubular micro flow reactor. The Pt/Al2O3 catalyst pellets (Pt/γ−Al2O3 pellets containing 1 wt% Pt, Sigma−Aldrich) were placed on the porous plate in the reactor, mixed with about 2 g of inert α−Al2O3 beads. The catalyst in a mixture of N2 and H2 (50–50 volume percent) flowing at 20 l/h of was heated to the desired reaction temperature and held at this temperature for 20 min prior to the start of liquid reactant flow (anisole 99.8%, purchased from Merck). Fresh catalyst (0.25–2 g) was used for each experiment, and each experiment was typically run for 6 h of continuous operation.

The catalytic conversion of anisole was carried out at 673 K and 14 bar; the liquid anisole flow rate was 0.03 mL/min, and the N2 and H2 flow rates were each 20 l/h. The value of the weight hourly space velocity (WHSV) was either 3 (g of anisole)/(g of catalyst × h), varied by changing the catalyst mass and liquid flow rate. Anisole conversion (X) and selectivity to various products i (Si) was defined as: 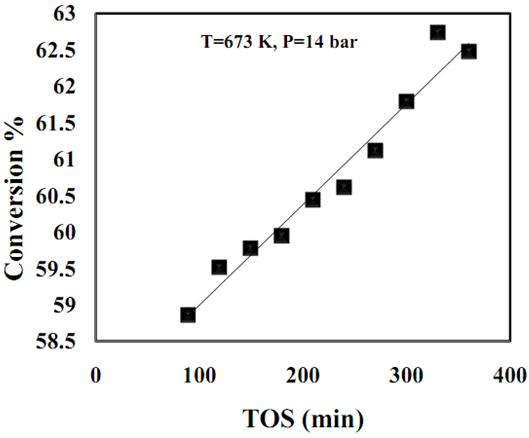 Figure 1. The conversion of anisole catalyzed by Pt/Al2O3 as a function of time on stream (TOS) at WHSV=3 g anisole/ (g catalyst×h).

Figures 2−4 represents the selectivity for the formation of the main products in the conversion of anisole to valuable chemicals catalyzed by Pt/Al2O3 in the presence of H2 at 673K. From this figure it can be observed that selectivity to alkylation and transalkylation is more than HDO reaction [15,26,27]. The selectivity–conversion data for anisole indicate that benzene, phenol and 2–methylphenol are primary products and that 2, 6–dimethylphenol, 2, 4, 6–trimethylphenol, 2, 3, 5, 6–tetramethylphenol and hexamethylbenzene are higher–order products. 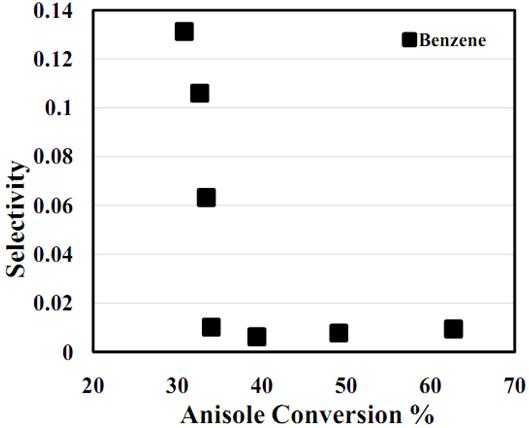 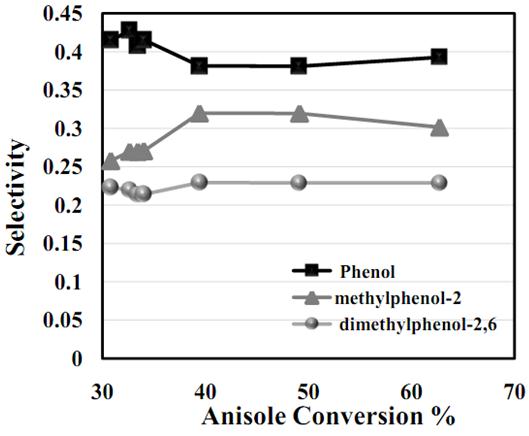 Figure 3. Selectivity for the formation of phenol, 2–methylphenol and 2, 6–dimethylphenol in the conversion of anisole catalyzed by Pt/Al2O3 in the presence of H2 at 673 K. 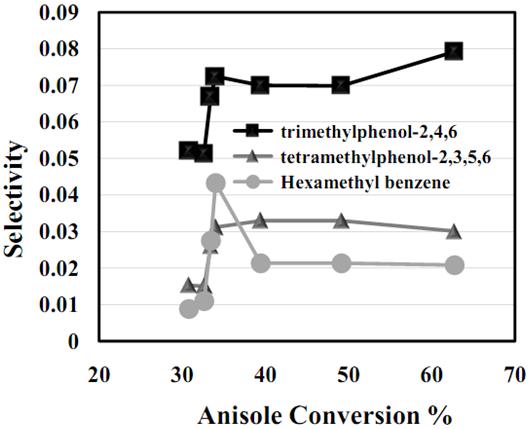 Figure 4. Selectivity for the formation of 2, 4, 6–trimethylphenol, 2, 3, 5, 6–terramethylphenol and hexamethylphenol in the conversion of anisole catalyzed by Pt/Al2O3 in the presence of H2 at 673 K. 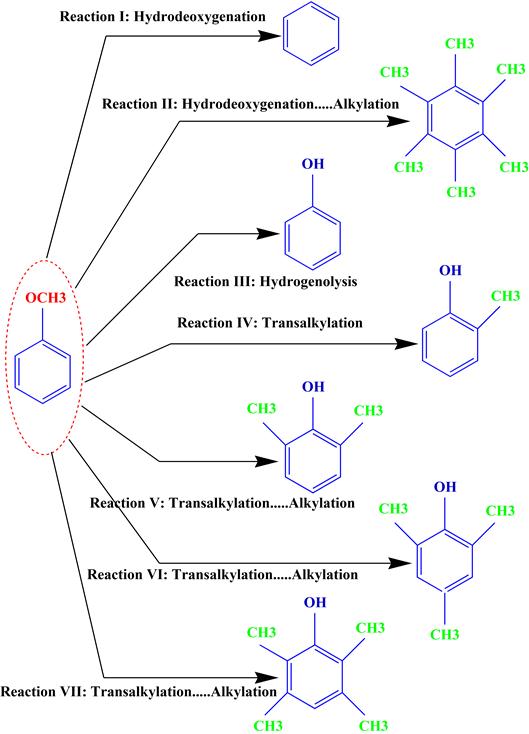 Figure 5. The main reactions to most abundant products based on analysis of selectivity−conversion plots for the conversion of anisole and H2 catalyzed by Pt/Al2O3 at 5673 K. 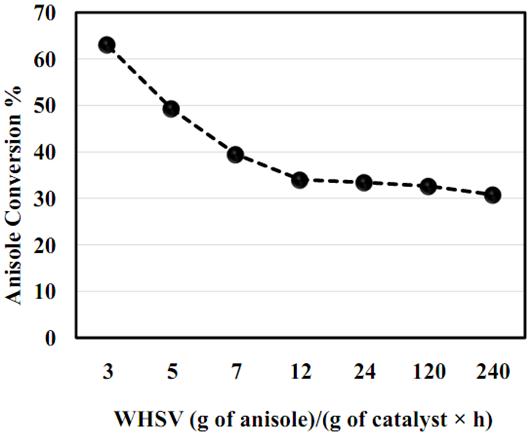 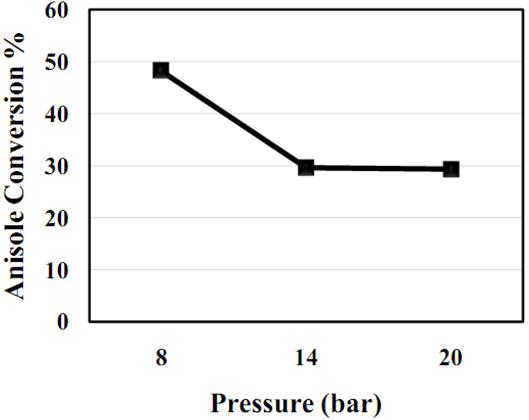 Figure 7. The conversion of anisole as a function of pressure at 673 K and WHSV=3 g anisole/ (g catalyst×h).

As a model reaction development, the upgrading process of anisole has been considered, and the reaction network represented in Figure 8. The main reaction routes during the upgrading process of anisole are hydrogenation, hydrogenolysis, hydrodeoxygenation, transalkylation and alkylation. In the present study, benzene, phenol, hexamethylbenzene, 2–methylphenol, 2, 6–demitheyphenol, 2, 4, 6–trimethylphenol and 2, 3, 5, 6–tetramethyl phenol were detected as the main products, whereas no methyl anisole, cyclohexanol and cyclohexanone were observed. Hydrogenolysis or demethylation takes place on the metal surface to form phenol. Another reaction involves direct deoxygenation, leading to methanol and benzene. Also using catalysts that incorporate both metal and acid functions such as Pt/Al2O3, in addition to direct deoxygenation, transalkylation and HDO are catalyzed by acidic sites. So the combination of a noble metal and an acidic support provide a higher catalytic activity. 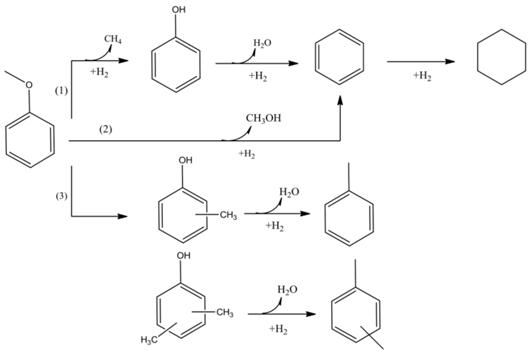 Figure 8. Reaction network for the conversion of anisole catalyzed by Pt/Al2O3 at 673 K and 14 bar.

This work has been financially supported by the research deputy of Shahrekord University. The grant number was 94PRM2M35963.