Nonlinear Control of Electronic Throttle Based on Backstepping Approach

Abstract: In order to overcome the disadvantage of the non-linear attribute of electronic throttle and the deficiency of traditional PID controller, a control strategy is proposed based on backstepping method， in which the throttle position tracking is taken as control object, and the structure of the electronic throttle is analysed, a mathematical model of the electronic throttle is established. A backstepping controller is also designed based on Lyapunov stability theory. Step, slope and sine waves are taken as target signals respectively to complete tracking control simulation by two control strategies: PID and backstepping, the simulation result indicates that backstepping control has good dynamic characteristics, step response time is less than 100 ms and its control effect is significantly better than that of PID. In addition, PID simulation can not reflect the torque in actual system reset spring, the simulation is different with actual waveform, and the Backstepping simulation based on the control model of nonlinear system is more in line with the actual, this type of control can effectively solve the contradiction between fast response and large overshoot in time-varying non-linear system.

The synthesis of a satisfactory ETC system is not easy since the plant is burdened with strong nonlinear effects of stick-slip friction, spring and gear backlash [7]. In order to address this problem, several detailed studies have been performed and control strategies proposed: 1) optimal control techniques, such as model predictive control strategy-based time-optimal control [8], constrained finite time optimal control [9], dynamic programming-based optimal control strategy for both electronic throttle and automatic transmission [10]; 2) linear controller with compensator, such as optimized proportional- integral-derivative (PID) controller with a feedback compensator for friction and limp-home effects [11], auto-tuning PID controller with nonlinear friction and limp-home compensators [12]; 3) sliding mode control (SMC) techniques, such as variable structure control with sliding mode [13, 14], neural networks-based sliding mode control [15], etc. Electronic throttle control system is developing toward to the complex control and integration, the use of modern control theory and method which realize intelligent control and improve the adaptive ability of electronic throttle control system are the developing trend of modern automobile.

Because the electronic throttle control system has nonlinear, time-varying, uncertainty [16], it is difficult to achieve higher control precision and better tracking performance by the traditional PID controller [17], to meet fast tracking of the step signal, a large control signal is needed which will cause an excessive overshoot and the throttle valve jitter. Considering the PID controller's deficiency, a backstepping control strategy based on Lyapunov stability theory is proposed in this paper, MATLAB/SIMULINK toolbox is used to complete the simulation of electronic throttle control system and achieve a fast and accurate control for optimum opening degree of the throttle. In backstepping control, the nonlinear factors are reflected in controlled quantities directly, which has feed-forward compensation effect, so the adjustment time is shorter, hysteresis is not obvious, and the control effect is better.

In operation, the throttle valve will be subject to the effect of spring torque applied by the returning spring, the viscous friction and Coulomb friction torques as well as the driving torque provided by the motor. When the motor output torque attain a dynamic equilibrium with the resistance generated by return spring of throttle and friction, throttle opening will keep invariant, the system uses pulse width modulation technology to drive DC motor, to adjust the duty ratio according to position control signal, to change output torque of DC motor, which will realize opening degree control for throttle. 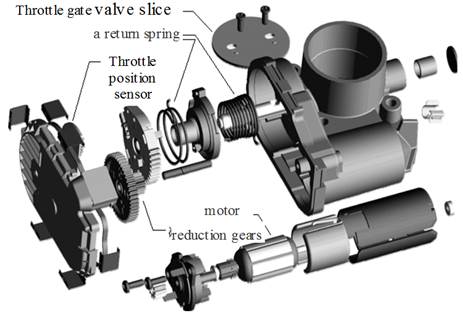 Fig. 1. Structure of the electronic throttle.

is the rotation angle of the throttle valve,

is the equilibrium position of the throttle angle.

is a viscous friction coefficient,

is the Coulomb friction coefficient,

is the angular velocity of the throttle.

The torque generated by motor is proportional to the current, which can be expressed as:

Where  is the motor torque coefficient.

is the motor counter electromotive coefficient,

is the motor resistance,

is the motor inductance,

is the motor speed, So we have:

Where is throttle valve speed,

is the gear ratio.

Take motor shaft as a reference point, according to Newton's second law, we have:

is the moment of inertia of the motor,

is the damping coefficient of the motor,

is the motor load.

is the moment of inertia of the throttle valve, the throttle dynamic equation can be obtained by Newton's second law:

Assume the total moment of inertia

From (1) to (7), we obtain the throttle angle dynamic equation as follows:

The backstepping control principle is using recursive method to design controller [18, 19], some state variables are taken as "virtual control signal". By constructing the Lyapunov function, the final control signal is obtained recursively through a series of "virtual control signal" [20]. It is essentially a kind of hierarchical dynamic error compensation, which is the decomposition of the complex nonlinear system into several subsystems, the order is not exceed the system order in these subsystems, a Lyapunov function is designed in each subsystem, all the derivatives of Lyapunov function in these subsystems must be less than zero to ensure that the system is asymptotically stable [21].

According to the throttle angle dynamic equation (8), let the state variable

Then equation (8) can be simplified as:

is a reference value, we have:

tends to zero as

tends to infinity, so

, therefore, the subsystem is stable from Lyapunov stability theory.

, define a virtual control function as:

It can be seen:

is asymptotically stable, then

The formula (17) shows that the linear part of the control law and the PID algorithm are Similarity, and the calculation is not complicated, easy to implement the engineering controller.

To compare the effects of different control strategies for electronic throttle control, two control strategies of PID and backstepping are simulated in this paper. Electronic throttle parameters are not required for conventional PID control, only proportional, differential and integral coefficients of the control signal are needed to be determined to make the tracking error reach the set value. But the backstepping control build its simulation model for position tracking control by throttle parameters and angle dynamic equation, and derive a stable control law by constructing Lyapunov function [22].

To make the design of backstepping controller be applied to actual system, a controller module is built by S function in MATLAB. The input signal is DC motor control voltage u, and the output is the position of the throttle opening. The parameter are taken as follows:

The target signals are: a step signal, a ramp signal and a sine signal, simulation results with two control methods are shown as in Fig. 2 and Fig. 3 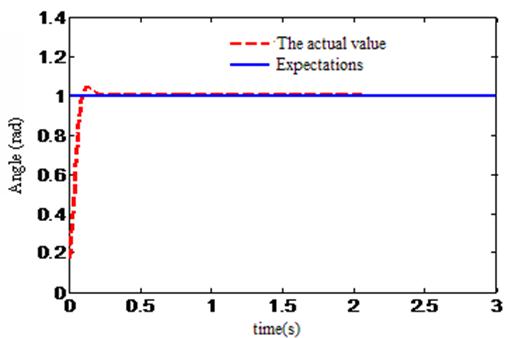 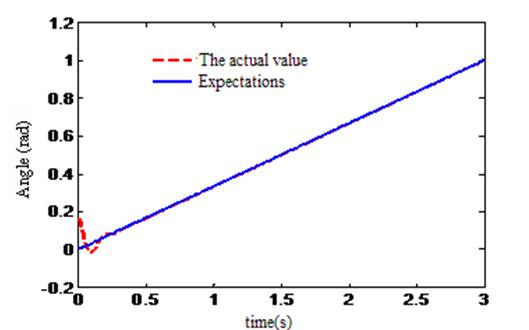 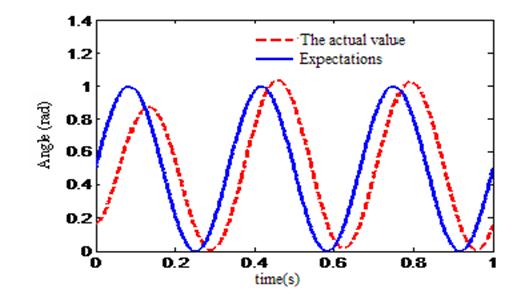 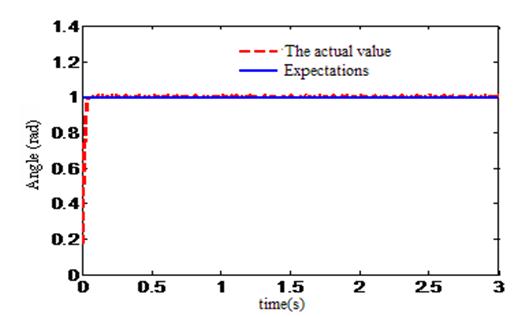 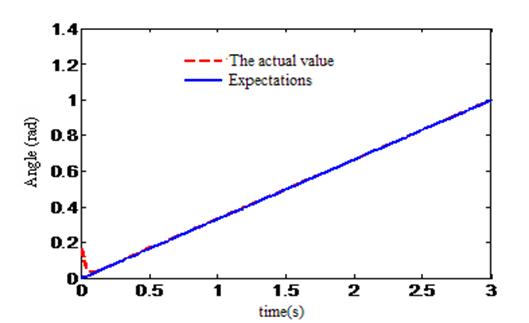 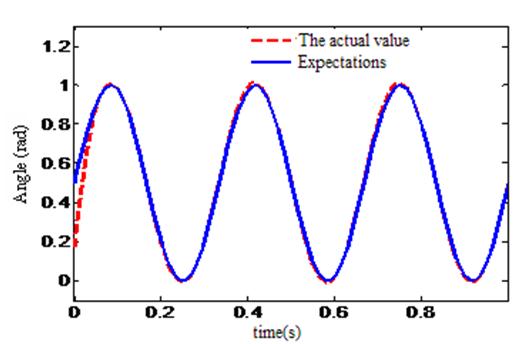 • Traditional PID control only take error as a basic control variable, and the proportional coefficient, integral coefficient and differential coefficient keep unchanged in adjustment process, so the control effect for nonlinear systems is not ideal. But in backstepping control, the nonlinear factors are reflected in controlled quantities directly, which has feed-forward compensation effect, so the adjustment time is shorter, hysteresis is not obvious, and the control effect is better.

Fig.4 is a block diagram of the control system’s hardware, and the system is mainly composed of a single-chip microcontroller control module, a sensor module, an AD conversion module, a driving module and a display module.

Fig. 4. The block diagram of the control system’s hardware.

Electronic Throttle Control System is shown as in Fig 5. The BOSCH DV-E5 throttle gate with DC motor and position sensor is used in experiment,an intelligent power chip TLE6209Rwith only one PWM signal and direction signal is chosen as the drive for DC motor, a closed loop control system is composed of ATmega16 single-chip computer, which realize data acquisition and processing for accelerator pedal and throttle valve position and PWM output. The PID control algorithm is used in experiment, the parameters of PID controller are: proportional coefficient

=0.0235. The waveforms which the feedback values track the target values are shown in Fig. 6. 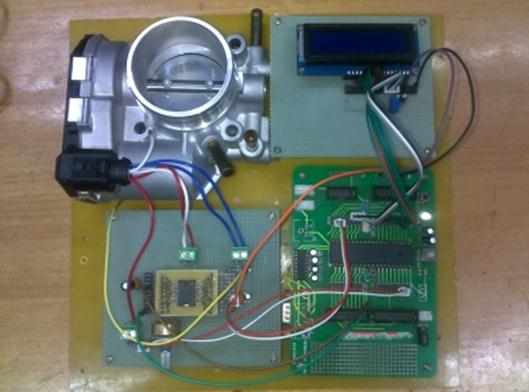 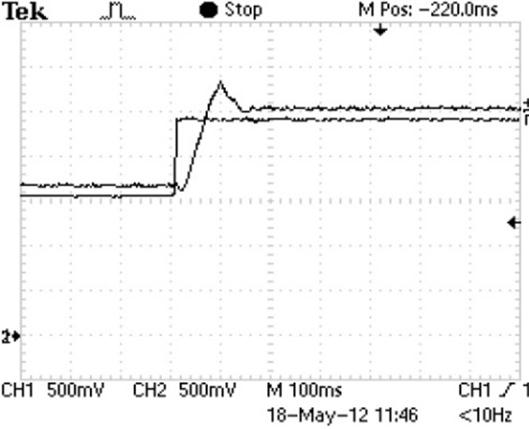 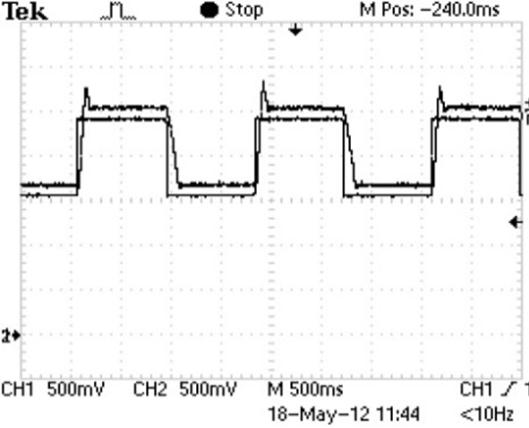 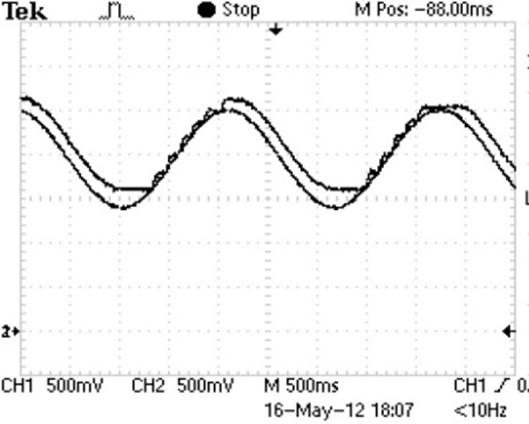 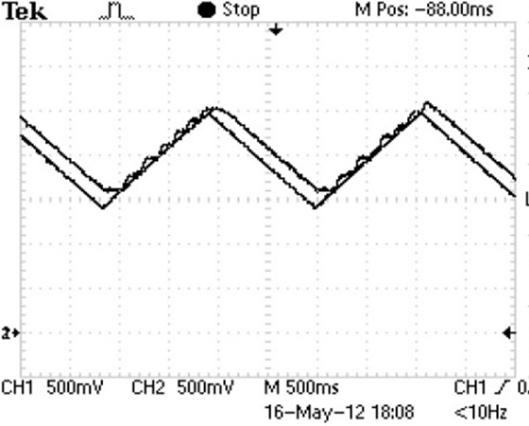 Fig. 6 (a) shows that when step input is applied, the overshoot is 27%, the adjustment time is 280ms, the reason the overshoot is so high is that a larger control driving signal is needed to ensure fast tracking.

When sine and triangular waves are applied, Fig. 6 (c) and Fig. 6 (d) show that: In rising stage of target value, the tracking accuracy is low and there is significant fluctuation, in the decline stage of target value, the tracking effect is better. It also shows the actual system must overcome the spring torque exerted by the return spring during the control of opening increase of throttle valve, and a return spring torque help to realize tracking control when opening decreases. Since the PID method is not based on system model, the simulation result is naturally not influenced by the spring torque, so there are differences between PID simulation and the actual result, the backstepping control method includes the system nonlinear factors, therefore, it has the advantages of nonlinear control.