Abstract: The objective of this study is to introduce solar energy as an electric and water source to distant communities in desert areas. Fossil fuel dominates world as the major source of energy that can be easily transformed into electricity and used for water reclamation in many societies. However, ambiguities and questions for supplying necessary fuels, such as fossil fuels, leads to more reliable energy sources. The sun is the major source of an alternative energy source and water, and establishing of solar energy dependent community will be explained in the paper, solar oasis. CSP, solar energy generation systems and their comparisons are introduced.

With continuously rising energy costs, the solar power has become an increasingly attractive option for electricity production and water distillation. Solar power has the direct ability to drastically lower energy and operating costs. The significant amount of solar energy is available in many regions of the world, see Figure 1. Solar energy generation systems can be classified into two categories: thermal (Concentrated Solar Power) and electric (photovoltaic) systems see Table 1.

Recent advances in solar technology in power systems and water distillation need to be utilized to offset the continuously increasing electricity and water demand in Saudi Arabia. These technologies can be applied to save conventional energy consumed by inhabitants as well as energy used for water distillation. This will assist in satisfying the consumption demands of electricity in Saudi Arabia. Present energy sources are based on oils, which leads in overpopulated cities to pollution that is emissions of greenhouse gases, economy and depletion of resources of fossil fuels can be considered as a problems; and also all other difficulties of urban life.

In the present study, an appropriate Concentrated Solar Power (CSP) Steam/Electricity Generation Systems for production electricity and water by using solar energy are considered [1]. The proposed research will design solar power plant and water distillation system; establish appropriate principles and improvement of design concept of solar power plants. It should be noted that areas of at least 2000 kWh/m²/y are usable for CSP plants due to profitability of investments [2]. This solar system can be established in any area with low quality of water resources. In many desert areas, the brackish water exists as groundwater which could be used after desalination, which can be performed as a solar desalination process; see, Figures 2, 3 and 4. 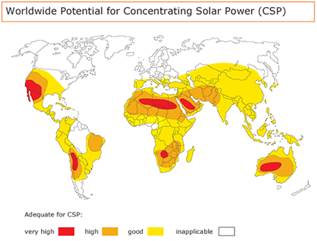 Renewable energy such as solar thermal, particularly CSP Tower, can be used in remote area, due to

·     Utilizing an abundant renewable source of energy such as sun. 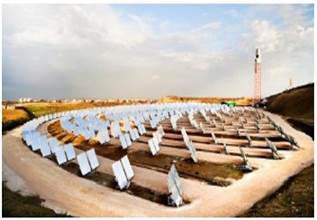 Large cities and energy intensive life style, restricted agricultural production and increasing pollution, the existing successful CSP plants in world are considered as quite encouraging due to the fact that they use the solar energy [4, 5], see Figure 5. 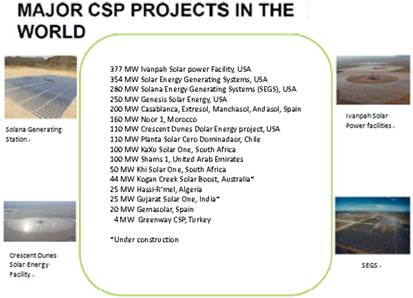 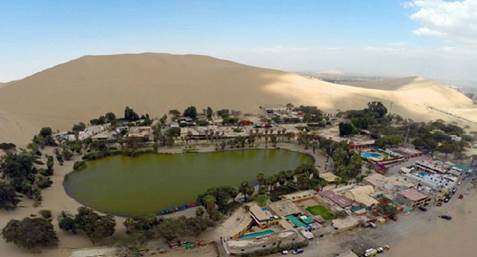 Small CSP plants 5-20 MW is quite appropriate in remote areas of Saudi Arabia, the brackish water is quite abundant in desert environment. Electricity and water brings life to the location. The agricultural and live stocks can be grown easily; and a sample solar oasis is presented in Figure 6. Concentrated Solar Power (CSP) Tower System efficiently generates energy with zero pollution or zero emission, and 100% clean energy in a wide variety of markets and applications world-wide. The application of small power plants will lead small energy loses in the system, which leads to more efficient energy uses for consumption instead of large plants.

The information presented is for clear and concise explanations of basic concepts, associated with Concentrated Solar Power (CSP) Tower System which enables the people to use inexpensive and hundred percent clean energy world-wide. 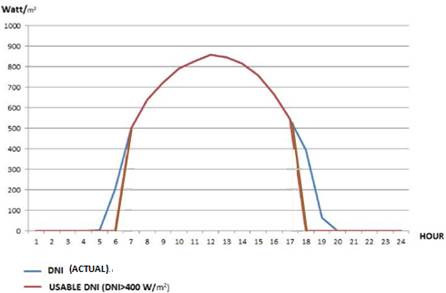 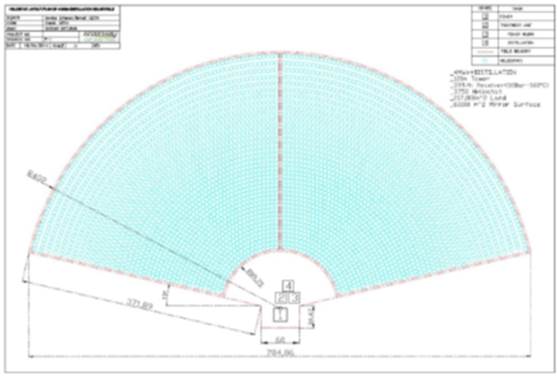 The CSP Tower systems generate high volume and high quality steam that is ready to use in steam turbines for various industrial applications, including drinking water production. CSP tower's operational internal electric consumption is significantly less to compare to parabola troughs. The system is highly efficient flexible, reliable, consistent, and customer oriented. The environmental problems are minimal and can be solved within its company limits and simplistic. The technology is reputable and has several research and supply chain partners. The system is self sustaining, low cost, light weight, and high efficient, it offers heliostats which are easy to install and maintain. Heliostat field and control system have an efficient communication which reduces field erection cost and complexity as well as maintenance costs. The other important features are the modular design and infrastructure (both software and hardware) for quick customer support and feature modifications. The plan footprint is relatively small due to a compact design. 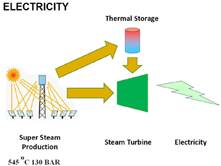 The heliostats are computer controlled for reflector positioning and wireless system for maximum optical efficiency. The heliostats and the CSP plant are presented by Figures 8 and 9, respectively.

Tower is made as strong and durable construction, and the receiver is a heat recovery boiler which proven design of 150 year old and 50 years life time. Tower system consumes less area respect to other CSP systems of the same energy output. The Tower system has very short piping; there is very small probability for pipeline failures, which is a common problem in parabolic troughs. As a result of thermal stresses on pipes. There is no toxic thermo fluids in Tower systems as in parabolic troughs and these fluids are quite expensive fluids and increase production cost of electricity and water and they must be replaced every two years. Tower systems are designed for these high thermal stresses. It is much easy and less costly cleaning of mirrors since heliostats are flat. The heliostats are self tracking and self calibrating for collecting solar energy at maximum level. Even more, initial installation of Tower system is extremely simple with respect to other systems and the lifetime operation is straightforward, see the comparison in Table 2, [6, 7]. 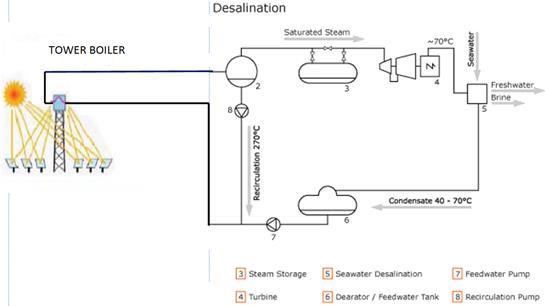 CSP Parabola Trough system is considered proven technology; however it has no further improvement left to move forward. This system’s molten salt operation is very risky and expensive, and heat tracing is expensive and energy consuming. This system is very difficult to erect and line up for the first time; and needs expensive calibrations.

CSP Tower system is a new and highly efficient method; and plenty room to excel its capacity and decreasing in cost. Piping and heat tracing requirements are very short; only between tower and storage. Molten salt moves only within tower height with a very low operational cost. Erections of independent heliostats are easy; less costly; and calibrated automatically and require minimal maintenance.

It becomes clear that seawater desalination has already been understood as potential source to resolve the fresh water problems in numerous countries. However, it should be noted that in spite of the good reliability and favorable economic aspects of desalination processes, the problem of high energy consumption needs to be resolved. The solar Tower energy system can be considered as an answer to this problem. A most efficient steam turbine (back pressure turbine) must be used for maximum efficiency. A "large amount compact water distillation system" can be adapted back to power block, back pressure turbine. This unique technology enables fresh water distillation available while electricity production continues, see Figure 10 and 11. The Tower system needs small area and standalone configuration, and the capacity can be increased at reasonable small cost and leads to lower energy cost.

During day-time, necessary heat for the boiler to generate steam is provided by focusing solar energy onto the receiver using solar concentrating mirrors (heliostats). CSP’s innovative technology must include an optimization algorithm to most efficiently track the sun throughout the day for maximum energy output.

Molten salt is selected in solar power tower systems for heat or energy storage, since it is liquid at atmospheric pressure at high temperatures; it provides an efficient, less expensive medium in which to store sun’s thermal energy, its operating temperatures are compatible with high-pressure and high-temperature steam turbines, and it is non-flammable and nontoxic, [8]. The molten salt is a mixture of 60 percent sodium nitrate and 40 percent potassium nitrate, and calcium nitrate in some cases, [9], [10] and [11]. Electricity can be generated in periods of less solar radiation days and at night using the stored thermal energy in the hot salt tank. Normally tanks are well insulated and can efficiently store energy for up to seven days, see Figures 12 and 13. 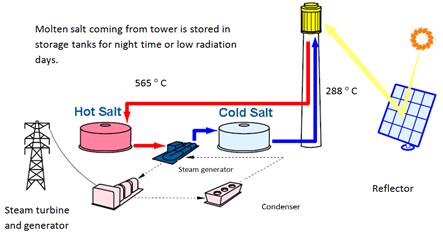 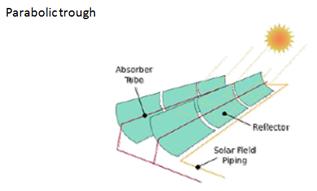 It is obvious that the CSP tower power plans are pollution free and excludes problems due to thermal fluids as in CSP parabolic tough systems. The produced water can be used for agriculture and possible industrial activities. The initial investment is very reasonable and risk free. The end product of CSP tower systems is non-oil dependent continuous energy and water from sun. The system can be used in remote areas and islands. These areas will gain economical value which does not have potable water and energy sources in place. It is known that these ideas may be known, however the paper is putting out the oil free society is a survival many areas without energy and water.