Cotton is the most popularly used textile fiber due to its easy availability, low cost as well as good mechanical and physical properties. Cotton is mainly derived from a shrub that is native to tropical and subtropical regions around the word, including Africa, USA, and India [1]. The two main product that are derived from the cotton plant is cotton fiber and cottonseed [2-4]. The main component of cotton is cellulose that is the most abundant natural polymer on Earth [5]. It is the renewable biopolymer of outstanding properties and variety of useful applications [5]. Cotton is mainly used as a material for the manufacture of textile fabrics such as towel, robes, jeans, shirts, etc. Textile industries use the cotton fibers for the production of these materials by weaving and knitting process. Cotton has diverse applications in the medical field ranging from a single-thread suture to the composites for the bone replacement [6]. Cotton-based textiles have been used to prevent the growth of microorganisms [7-8]. Moreover, it was shown that cotton has electric and dielectric behavior. Additionally, cotton based fibers have attracted significant attention as a phase change materials (PCMs) [9]. During early 1980’s under the National Aeronautics and Space Administration (NASA) research program PCMs capsules were embedded in textile structure to improve their thermal performance [10]. It was used as fabric in the astronaut space suite to provide improved thermal protection against the extreme temperature fluctuations in the outer space [10]. Hence, in order to use cotton-based textile for these applications their thermal and physical stability should be improved. Moreover, the chemical processing of cotton is difficult because this natural polymer is not meltable as well as it is insoluble in most of the available solvents due to strong hydrogen bonds and partially crystalline nature [11]. Many research groups in past few decades have devoted significant attention on modification of cotton for various applications. Yin et al. reported the chemical modification of cellulose carbamate using supercritical carbon dioxide and reported that this method has remarkably increased the nitrogen content in the modified polymer [5]. Recently, cotton fabrics were chemically modified with polyamidoamine dendrimer to yield antimicrobial and efficient polymer materials for ink jet printing [12]. Zhao et al. reported the carboxymethylation of cotton and elaborated that their high water absorbency maintains its fabric structure makes them potential candidates for wound therapy. El-gandy et al. modified the cotton fabrics by grafting with acrylic acid, acrylonitrile under gamma radiation treatment [13]. However, all these methods are not cost effective, hence some alternative strategies should be designed which can modify the physical and thermal properties of cotton. Recently, biofield energy treatment was used as an effective approach for modification of physicochemical properties of metal [14], ceramic [15] and polymers [16]. Hence, authors planned to investigate the impact of biofield treatment on spectral and thermal properties of cotton.

Energy medicine, energy therapy, and energy healing are the divisions of alternative medicine. It is believed that healers can channel the healing into the patients and confer positive results. Moreover, The National Centre for Complementary and Alternative Medicine/National Institute of Health (NCCAM/NIH), has authorized the use of this therapy in health care sector [17]. Biofield energy therapy is known as a treatment method that embraces an improvement in people’s health and well-being by effectively interrelating with their biofield [18]. It is believed that good health of a human being entirely depends on the perfect balance of bioenergetic fields [19]. Thus, it is envisaged that human beings have the ability to harness the energy from the surrounding environment/Universe and can transmit into any object (living or non-living) around the Globe. The object(s) always receive the energy and responding in a useful manner that is called biofield energy. Mr. Trivedi is a well-known biofield expert who can transform the characteristics in various research fields such as biotechnology [20] and microbiology [21]. This biofield energy treatment is also known as The Trivedi Effect®.

The control and treated cotton samples were analyzed using Pyris-6 Perkin Elmer DSC at a heating rate of 10ºC/min and the air was purged at a flow rate of 5 mL/min. The predetermined amount of sample was kept in an aluminum pan and closed with a lid. A reference sample was prepared using a blank aluminum pan. The percentage change in latent heat of fusion was calculated using following equations:

Where, ΔH Control and ΔH Treated are the latent heat of fusion of control and treated samples, respectively.

A Mettler Toledo simultaneous TGA and differential thermal analyzer (DTA) was used to investigate the thermal stability of control and treated cotton samples. The heating rate was 5ºC/min, and the samples were heated in the range of room temperature to 400ºC under air atmosphere.

The FT-IR spectra were recorded on Shimadzu’s Fourier transform infrared spectrometer (Japan) with the frequency range of 4000-500 cm-1. The predetermined amount of sample was mixed with potassium bromide (KBr), and KBr pellets were prepared by pressing under the hydraulic press. 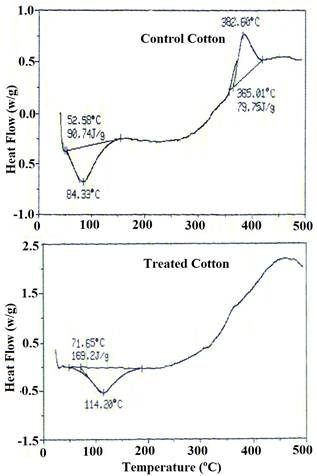 TGA of treated sample was carried out to get further insights about the thermal stability of the sample. TGA thermogram of treated cotton is shown in Figure 3, and it showed one-step thermal degradation pattern. The TGA thermogram of treated cotton showed onset temperature at 242.55ºC and this thermal degradation process was terminated at 391.35ºC. The result showed around 76% of weight loss during this thermal event. Since, the treated cotton started to degrade thermally only at 242ºC that may be associated with good thermal stability of the treated sample. Yue suggested that mercerization process substantially increased the thermal stability of the treated cellulose as compared to control sample. They suggested that due to the strong interaction of the –OH group in cellulose required high energy to start the thermal degradation process [27]. It was reported that thermal properties of textiles are most important and desired features for their applications [28, 29]. For example, thermal insulation determines the elementary function of the garments. Thermal insulation is a key parameter for determining apparel comfort for the user. Hence, it is assumed that biofield energy treated cotton due to good thermal stability could be utilized for fabrication of textile fabrics. 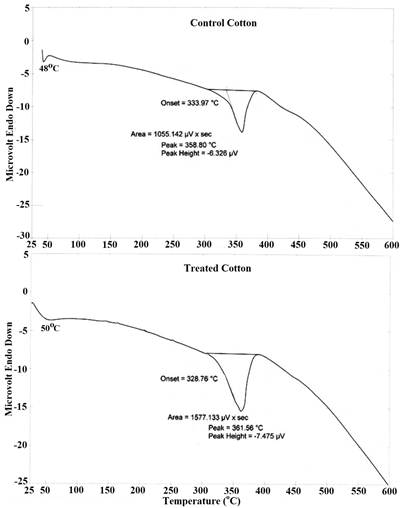 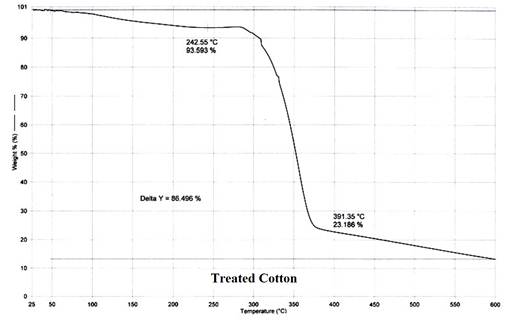 FT-IR spectroscopy of control and treated cotton is presented in Figure 4. The FT-IR spectrum of control cotton showed a characteristic peak at 3408 cm-1 that was due to –OH stretching vibrations. This band is mainly due to polymeric O-H or hydroxyl group associated with hydrogen bonding [30]. The absorption bands at 2910 and 2800 cm-1 were due to C-H stretching vibrations peaks. The vibration peaks at 1460 and 1713 cm-1 were appeared due to carbonyl functional group as well as overlapping involvements of C-H bending vibrations [31]. Boeriu et al. and Chung et al. reported that FT-IR region below 1500 is the fingerprint region and composed of additional bands that correlate mainly to carbohydrates and other bio-constituents [32, 33]. The small peak at 883 cm-1 in the control cotton was attributed to β glycosidic linkages between the sugar molecules in hemicelluloses and celluloses. The stretching vibration peak at 580 cm-1 was due to –OH out of plane bending vibrations or atmospheric CO2 (deformation vibration) contamination [34-36].

The FT-IR spectrum of treated cotton is shown in Figure 4. The vibration bands at 3430, 2925 and 2852 cm-1 were mainly due to stretching vibration peaks of –OH and –CH groups in the treated sample. The FT-IR peaks at 1662 and 1431 cm-1 were attributed to the –C=O and –CH bending vibrations. The peak originally present at 883 cm-1 in control sample was disappeared and merged with –OH bending peak in the treated cotton sample. The –OH out of plane bending vibration was appeared at 529 cm-1 in the treated sample. Overall, the FT-IR results showed upward shifting in hydrogen bonded –OH group stretching peak 3408→3430 cm-1 in the treated cotton as compared to the control. It was previously suggested that the frequency (ν) of the vibrational peak depends on two factors i.e. force constant and reduced mass. If the mass is constant, then the frequency is directly proportional to the force constant; therefore, increase in the frequency of any bond suggested a possible enhancement in force constant of respective bond and vice versa [37]. Hence, it is assumed that biofield energy treatment might cause an increase in force constant that led to increase in the frequency of the –OH bond. Additionally, the carbonyl stretching peak (1713-1662 cm-1), C-H bending (1460-1431 cm-1), OH bending (580-529 cm-1) and –OH out of plane bending (580-529 cm-1) showed downward shift that could be due to biofield energy treatment. It is assumed here that decrease in frequency of these peaks could be due to decrease in force constant. Hence, it is assumed that biofield energy treatment had caused structural changes in the treated cotton as compared to the control. 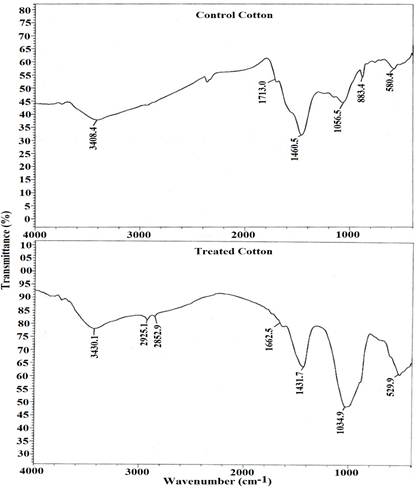 The authors wish to thank all the laboratory staff of MGV Pharmacy College, Nashik for their kind assistance during handling the various instrument characterizations. The authors would also like to thank Trivedi Science, Trivedi Master Wellness and Trivedi Testimonials for their support during the work.