Impact of Atmospheric Parameters on Power Generation of Wind Turbine

Abstract: Economic growth of any country depends on access to reliable energy. Wind energy is fast gaining importance among non-conventional sources, which is a function of parameters like topography of the terrain, weather conditions etc. The present work explores the potential of a 225 MW turbine located in a mountainous site in Maharashtra, India. Values of wind velocity, air temperature, density and power generation were recorded for one complete year. Analysis was done using power curves. The results show that the energy output of wind turbine is based on power curves of a specific site. The conceptual features such as energy per rated power, efficiency of wind turbine and average energy per hour are calculated. It is useful for the investor to access the wind turbine pay-back period and adopt of new optimizing technique.

Owing to the exponential escalation of world population, the requirement for energy is increasing at a huge rate. The exhaustion of fossil fuels as well as the upcoming realization of the environmental degradation has given precedence to the use of conventional and renewable alternative energy sources like solar, wind and solar-hydrogen energy [1]. In recent years, the fast development in wind energy technology has made it a promising alternative to the conventional energy system. Wind energy systems have made a noteworthy contribution to everyday life in developing countries [2, 3]. As the developing countries are preparing to meet their needs during the 21st century, they are confronting many challenges, in the use and deployment of renewable energy sources.

To suffice the world’s electricity needs, the wind energy potential is vast [4]. Almost every country has sites with regular wind speeds of more than 5 m/s measured at a height of 10 m, which are adequate for development [5, 6]. The production of wind energy depends on the geographic and environmental conditions of the wind turbine location. Furthermore, wind data having real statistical significance, i.e. data obtained over long periods is a requisite for the assessment of generation of specific plants and the relative technical-economic considerations [7]. Such data is only scarcely available in the literature [8, 9]. Through systematic recordings of wind speed and direction is a potential site for the development of wind energy. [10]. Wind surveys and installations have up to now been concerned with on-land sites [11]. Better wind velocity will lead to more amount of wind power generation. The offshore sites and shallow water sites are better for windmill installation but maintenance and installation [12].

The low energy concentration of wind, its variations and unsystematic availability over time, collide with the needs of electricity production [13]. Above all, the low energy concentration in wind signifies that, a big number of wind turbines need to be used where a wind plant of major power is to be built, which should be huge in size taking into account of the installed generating capacity [14]. However, as an additional source of electricity under suitable conditions, wind can still be put to a good use [15], chiefly since it is easily accessible, with no emissions and since it allows additional diversification of energy sources. World watch Institute (USA) has reported that wind power plants are liable to provide more employment opportunities per Terawatt-hour produced per year than any other energy technology used by the electricity utilities [16]. Also noteworthy is the fact that, in growth with other kinds of generating plants, the so-called "energy payback time" is less for wind energy, as it differs from a few months to one year at most, as it relies on the size of the wind turbine. While a machine has functioned for this period, it has produced enough energy to provide for another wind turbine similar to it [17]. Energy is the chief measure of all kinds of work by human beings, nature and all that happens in the world is the flow of energy in one to the other form.

2. Importance of Wind Turbine as Alternate Source of Energy

Wind gets its movement as a result of its energy. A device competent of slowing down the mass of moving air can haul out part of the energy and thus this energy can be switched into useful work [18]. Following aspects direct the output of wind energy converter: the wind speed, cross-section of the wind swept by rotor, conversion efficiency of rotor and generator transmission system. Hypothetically, it is possible to get 100% efficiency by arresting and averting the channel of air through the rotor. But in reality, a rotor is proficient to slow down the air column merely to one third of its free velocity or so [19]. A competent wind generator is capable to switch maximum up to 60% of the accessible energy in wind into mechanical energy. Additionally, the whole efficiency of the power generation can go down to, say, 35% owing to the losses incurred in the generator or pump [20, 21].

The sun’s non-uniform heating of the earth’s surface results in the circulation of air in the atmosphere. As the temperature of the earth’s surface heats up, the air present over the earth’s surface will become light in weight and expand; it is compelled upwards by cool, denser air which blows in from surrounding areas causing the wind to flow. The strength of wind and the nature of wind depend upon the nature of the land; the quantity of cloud over and the angle of the sun in the sky. Generally, the air above the earth’s surface tends to heat up more during the day time than air over the water surface. In coastal areas, during the day time, earth surface will become hot swiftly than water surface. In the nighttime however, this course of action is reversed, and cool air flows off shore [22].

As the solar input keeps on differing, the change and course of these terrestrial winds alter with the seasons. The terrestrial winds are caused when the breezy surface air sweeps downward from the poles powering the warm air over the tropics to mount [23]. However, the course of these huge air movements affected by the revolving of the earth and the net outcome is a large counter-clockwise movement of air around low-pressure regions in the northern hemisphere and clockwise movement in the southern hemisphere [24]. It is known that the regular wind speeds are superior in hilly and coastal areas than they are in the inlands. The winds also have a tendency to blow more consistently and with superior potency above the surface of the water where there is a less surface drag. However the wind patterns are remarkably constant despite the alternating nature of the wind [25]. Wind velocity amplifies in magnitude with elevation. It has been shown that at a height of ten meters, velocity is found to be 20-25% greater than at the surface. At an elevation of 60 m, it may be 30-60% higher on account of the reduction in the drag effect of the earth’s surface [26].

Wind energy is possessed by the movement of air. The moving air is cut by a device like propeller and the kinetic energy is converted into useful work, the process being known as harnessing of wind energy [27].

There are three factors on which the wind energy depends:

• The cross-section of wind swept by rotor

• The overall conversion efficiency of the rotor, transmission system and generator or pump

German physicist Albert Betz concluded in1919 that no wind turbine can convert more than16/27 (59.3%) of the kinetic energy of the wind into mechanical energy turning a rotor. To this day, this is known as the Betz Limit or Betz' Law. The theoretical maximum power efficiency of any design of wind turbine is 0.59 (i.e. no more than 59% of the energy carried by the wind can be extracted by a wind turbine). This is called the "power coefficient" and is defined as: Cp max = 0.59 [15].

In this work we have selected a site with wide variation of wind speed (from 5 – 13 m/s) and the site itself is windy. The location is at Dhebewadi, Taluka Karad, District Satara, in the state of Maharashtra, India, which is at a mean sea level (MSL) of 1012 m. The average rainfall during monsoon (June – September) is 36 mm. The average percentage of humidity is 60 %. There are several wind turbines at this place by private players viz. VESTAS, SUZULON, TATA POWER etc. The data obtained for one particular turbine run by VESTAS turbine is used in this work. The turbine details are: Rotor diameter: 82 m, Effective diameter of blade: 78 m, Gearbox rated power: 1800 KW, Gearbox Ratio: 1:84.3, Rated Power: 1650 KW, Speed: 1200 rpm, Apparent Power: 1808 KVA, Rated current: 1740 A.

The data pertaining to various parameters and power generated for the particular wind turbine was noted for one complete year (January – December 2014). Parameters like average temperature, average velocity and average density were calculated along with number of hours, the turbine worked and the average power generation in the given month was calculated from year – long data. From this the average energy, capacity of the plant, energy per swept area and energy per rated power were also calculated and are shown in (Table 1). Sample calculations for the month of January are shown below in the equation 2 to equation7. Also since power generation depends on factors like wind speed, air temperature and air density, so effect of these on power generation are plotted Fig. (1 - 6). Also the overall effect of various parameters on power generation is as shown in Fig. (7). the turbines rated or nominal power is 1650 KW. The complete analysis of the VESTAS wind turbine for the year 2014 is made with the help of equation from 8 to equation 13. By this we can come know that, weather the present turbine is working efficiently and many more important calculations like energy per rated power and energy per swept area. 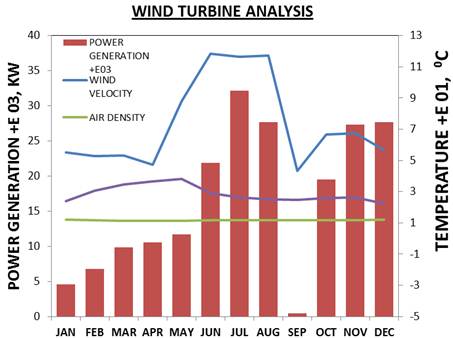 As shown by the figures above (fig. 1 to 7) the power generation for the entire year 2014 was monitored and special emphasis was given to understand and interpret the effect of various parameters on power generation. Three such factors have been identified it, namely wind speed (m/s), temperature of air (ºC) and density of air (Kg/m3). The natural variation of parameters has been recorded, plotted and analyzed for the entire year 2014. The following can be observed:

4. The Betz’s equation P = 1/2 ρAV3Cp watts indicates that wind velocity will have most profound effect on power generation, since the velocity has power of three (V3). This has also reflected in this work to be true

The result of a variety of parameters on the power generation in the mountainous regions in Maharashtra, India was scrutinized and calculated for the entire year 2014. Analysis of this result was done with the aid of power curves in which the most profound effect of wind speed on power generation for the duration of this entire period was examined and noted. On the other hand, at the end of the findings and this study and we come to a conclusion that we have to also consider the fact that these findings are and will be difficult to generalize for wind power generation; because as we all are aware a lot of a times it may demonstrate a discrepancy with local parameters.