The chlorinated derivatives of phenols are an important class of pollutants that originate from the industrial chemicals [1]. They are non-biodegradable and hence remain in the environment for a longer duration. 2,4-dichlorophenol (2,4-DCP) is a widely used chlorinated phenol that comes under the category of industrial toxic compounds and listed by United State Environmental Protection Agency (US EPA) as primary pollutants [2, 3]. 2,4-DCP is used as a precursor in the synthesis of 2,4-dichlorophenoxy acetic acid (2,4-D), an herbicide. Other uses include as a wood preservative, insecticide, plant growth regulator, etc. [4, 5]. However, due to the consistent use, it poses hazards to the environment hence, these toxic and bio-resistant compounds need to be removed from the environment or transformed into some other form that are less harmful.

When a chemical enters the environment, it distributes itself in the different compartments viz. air, water, soil and living organisms. Moreover, the distribution, as well as degradation of the chemical from these compartments, were decided by the physicochemical properties of that chemical. These properties include molecular weight, solubility, volatilization, and polarity, etc. [6, 7]. The environmental fate of 2,4-DCP from the aquatic surface and the soil surface is expected through the volatilization process [8, 9]. Its molecules reach in the atmosphere through the process of volatilization where they degraded by reacting with the photochemically produced free radicals [10]. However, this process is slow and not suitable for high concentration of pollutants. Recently, several processes are designed for making this process fast that include advanced oxidation processes [11], but they are not very much cost- effective. Therefore, it is of great significance to search an alternative strategy that can help in the fast degradation of these chemicals from the environment in a cost effective manner. Biofield energy treatment is recently known for its ability in altering the physicochemical properties of several metals and organic compounds [12, 13]. Biofield energy is scientifically related to the human energy field that is formed by the body in the surrounding space. This energy field is generated by the physical and thought processes of the human body and its interaction with the environment [14]. The living organisms are regularly exchanging this energy with the surroundings to maintain themselves [15]. The biofield energy and its interaction with the environment are used by the practitioners as the healing therapies. Its effectiveness was reported in the reduction of tension, anxiety and pain. Moreover, these therapies are considered as complementary and alternative medicines (CAM) by National Institute of Health (NIH)/National Centre for Complementary and Alternative Medicine (NCCAM). It was believed that the healers/practitioners channel the energy from the environment and direct it towards certain target [16-18]. Thus, the human has the ability to harness the energy from the environment and can transmit it to any living or non-living object(s) around the Globe. By absorbing this energy, the object will respond in a useful way. This process is known as biofield energy treatment. Mr. Trivedi is well known to possess a unique biofield energy treatment (The Trivedi Effect®). The impact of his biofield energy treatment has been reported for causing alterations in various research field viz. agriculture, microbiology, biotechnology [19, 20], and materials science [12, 13]. Hence, the present study was designed to analyse the impact of the biofield energy treatment on the various physicochemical properties of the 2,4-DCP using different analytical methods viz. X-ray diffraction (XRD), differential scanning calorimetry (DSC), thermogravimetric analysis (TGA), Fourier transform infrared (FT-IR) and UV-visible (UV-Vis) spectroscopy.

The Phillips Holland PW 1710 X-ray diffractometer system was used to obtain the X-ray powder diffractogram of control and treated samples. The X-ray generator was equipped with a copper anode with nickel filter operating at 35kV and 20 mA. The XRD system used 1.54056 Å wavelength of radiation. The data were collected from the 2θ range of 10°-99.99° and a counting time of 0.5 seconds per step along with a step size of 0.02°.

The crystallite size (G) was calculated from the Scherrer equation:

Where, k is the equipment constant (0.94), λ is the X-ray wavelength (0.154 nm), b in radians is the full-width at half of the peak and θ is the corresponding Bragg angle. The PowderX software was used to calculate the other parameters viz. lattice parameter, unit cell volume, molecular weight and density of the control and treated samples.

Moreover, the percent change in crystallite size was calculated using the following equation:

Here, Gc and Gt denotes the crystallite size of control and treated powder samples, respectively. Similarly, the percent change in lattice parameter, unit cell volume, molecular weight, and density was calculated to analyse the impact of biofield treatment on crystal parameters of treated sample as compared to the control.

The effect of temperature on the thermal stability profile of 2,4-DCP was analyzed using DSC and TGA/DTG studies. The impact of biofield treatment was analyzed by comparing the results of treated sample with the control sample.

The DSC analysis of control and treated sample was carried out using Perkin Elmer/Pyris-1. The control and treated samples were accurately weighed and hermetically sealed in aluminium pans. Further, the samples were heated at a rate of 10°C/min under air atmosphere (5 mL/min). The thermograms were collected over the temperature range of 50°C to 250°C. An empty pan sealed with cover pan was used as a reference sample.

For FT-IR characterization, the samples were crushed into fine powder and mixed in spectroscopic grade KBr in an agate mortar. Then the mixture was pressed into pellets with a hydraulic press. The FT-IR spectra were recorded on Shimadzu’s Fourier transform infrared spectrometer (Japan) in the frequency range 4000-350 cm-1. The FT-IR spectral analysis was helpful in determining the effect of biofield energy on the strength of bonds and stability of the samples.

The UV-Vis spectral analysis was measured using Shimadzu UV-2400 PC series spectrophotometer. The spectrum was recorded with 1 cm quartz cell having a slit width of 2.0 nm over a wavelength range of 200-400 nm. This study helps to investigate any change in the electron transfers behavior between the orbitals or bands of atoms, ions and molecules from the ground state to the first excited state. 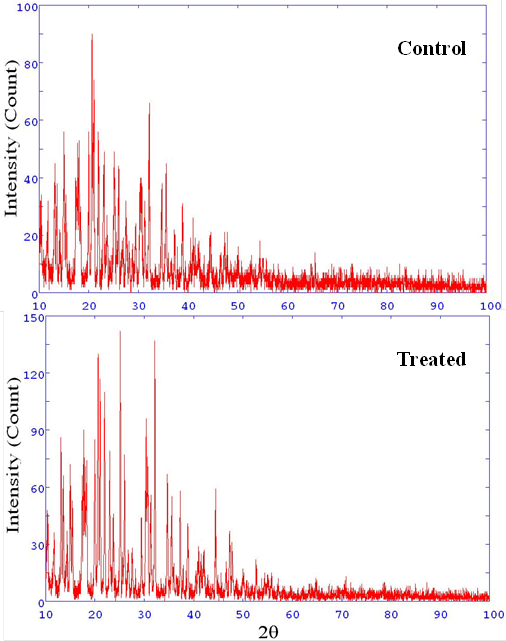 Fig. 1. XRD diffractograms of control and treated samples of 2,4-dichlorophenol. 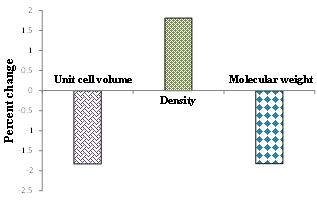 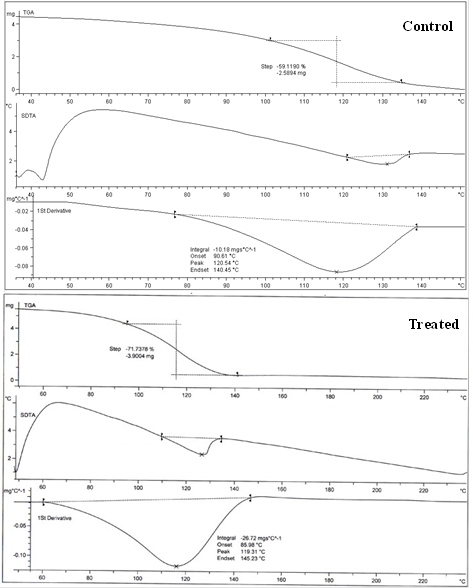 Fig. 3. TGA/DTG thermograms of control and treated samples of 2,4-dichlorophenol. 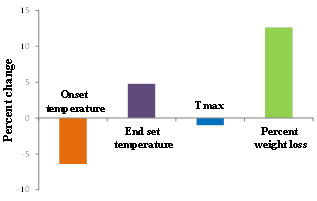 The FT-IR spectra of control and treated samples of 2,4-DCP are shown in Fig. 5. The major vibration peaks observed were as follows:

The OH group gives rise to three vibrations: stretching, in-plane bending and out-of-plane deformations. In the present study, the strong band observed at 3437 cm-1 in control and 3435 cm-1 in the treated sample was assigned to O-H stretching mode of vibration. The peaks observed at 1251 and 653 cm-1 in both, control and treated samples were assigned to OH in-plane and out-of-plane bending vibration, respectively. 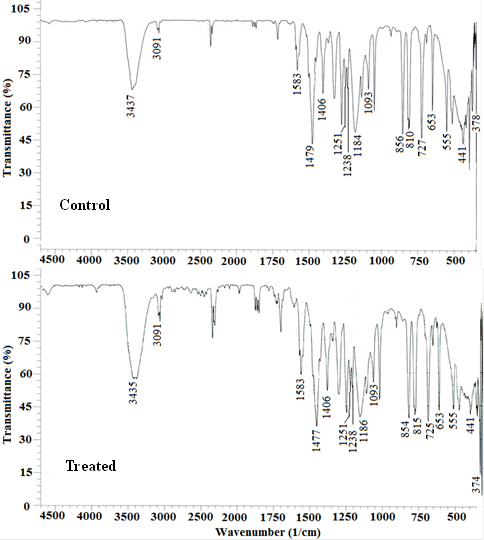 Fig. 5. FT-IR spectra of control and treated samples of 2,4-dichlorophenol.

Fig. 6. UV-Vis spectra of control and treated samples of 2,4-dichlorophenol.

The overall study was accomplished to determine the impact of biofield treatment on various physicochemical properties of the sample of 2,4-DCP. The XRD results showed an alteration in the lattice parameters and molecular weight along with 156% increase in crystallite size of the treated sample as compared to the control. It suggested the presence of some internal strain due to the biofield energy treatment. Moreover, the increased crystallite size may ensure the less solubility of the treated sample; thereby the sample remained on the water surface and hence might result in more volatilization. Besides, the thermal analysis data revealed the decreased thermal stability and increased vaporization of the treated sample as compared to the control. It probably occurred due to the breaking of intermolecular hydrogen bonding after biofield treatment. The decreased thermal stability of the treated sample suggests its fast vaporization from ground and water surface to the atmosphere where it can further degrade by reacting with photo-chemically produced free radicals. Hence, it was concluded that the biofield treated 2,4-DCP could be less harmful to the environment due to their fast degradation process.

Authors are very grateful for the support of Trivedi Science, Trivedi Master Wellness and Trivedi Testimonials in this research work. The authors would also like to acknowledge the whole team from the Sophisticated Analytical Instrument Facility (SAIF), Nagpur and MGV Pharmacy College, Nashik for providing the instrumental facility.