Industrial development results in the generation of industrial effluents and if untreated, results in water, sediments and soil pollution (Fakayode, 2005). Industrial effluent is heavily loaded with different types of organic and inorganic pollutants, which are discharged into receiving water bodies (Jern, 2006).

Heavy metal is a general collective term that applies to the group of metals and metalloids with atomic density greater than 4000 kgm-3, or 5 times more than water (Garbarino et al., 1995). Some heavy metals are purely toxic with no known role (Shi et al., 2002) while others are essential for life at low concentration but become toxic at high concentrations (Franke et al., 2003).

Conventional physicochemical techniques for metal remediation such as filtration, acid leaching, electrochemical processes or ion exchange are expensive and may not be very effective. Biological treatment is preferred over physicochemical for toxic pollutants as the former is cost effective, efficient and environmentally friendlier (Ojo 2006; Hamza et al., 2009). Recently, studies have discovered the use of microorganisms, plants and enzymes extracted from other organisms for the remediation of pollutants in contaminated soil, water and ground water (Hamza et al., 2009; Usman et al., 2012).

Effluent samples were collected from five different discharge points of the Kaduna Refining and Petrochemical Company (KRPC) into sterilized bottles and syringes. The samples were transported to the Department of Biological Sciences Laboratory, Nigerian Defence Academy (NDA), Kaduna for bacteria isolation.

To 0.1ml of the 10-fold diluted effluent samples were each inoculated using pour plate method into nutrient agar plates containing a combined concentrations of the heavy metals in their salt which include potassium dichromate (K2Cr2O7), cadmium nitrate Cd(NO3), nickel chloride (NiCl2) and zinc sulphate (ZnSO4). For each nutrient plate, a concentration of 0.5 mg/ml was incorporated. The plates were incubated at room temperature for 24-48 hours. The bacteria were isolated and subcultured into nutrient plates to obtain pure cultures of each possible tolerant strain (Pandit et al., 2013).

2.3. Test for Tolerance Trend of Bacteria Isolates to Various Concentrations of each Heavy Metal

Isolated colonies of the heavy metal tolerant bacteria were observed for identification based on their superficial forms (circular, filamentous and irregular); elevation (Flat, convex and umbonate), margin and shape (spiral, rod or cocci). Gram staining (Aneja, 2006) and reactions to biochemical tests were used. The results obtained were compared with bergey’s manual of systematic bacteriology for the identification (Holt et al., 1994).

2.5. Evaluation of the Potentials of Heavy Metals by Bacterial Isolates in Effluent

The wastewater was sterilized using an autoclave at 121 oC for 15mins. To seven 120ml sterile conical flasks was added 100 ml of the sterilized wastewater each. The first flask was not inoculated with bacterium (Control), the second, third, fourth, fifth and sixth were each inoculated with 20µl of a 24hrs nutrient broth culture of Pseudomonas aeroginosa, Stapyloccoccus aureus, E.coli, Proteus vulgaris and Klebsiella pneumoniae respectively. The seventh flask was inoculated with a mixed culture consortium (MCC) of all the five bacteria. The experiment was left to stand for 24hrs after which the concentration of cadmium, chromium, nickel and zinc was measured using atomic absorption spectrophotometer. Percentage reductions of heavy metals were observed when comparism was done between the values before and after treatment. 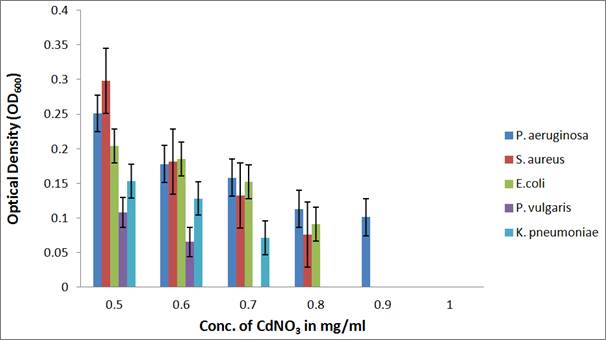 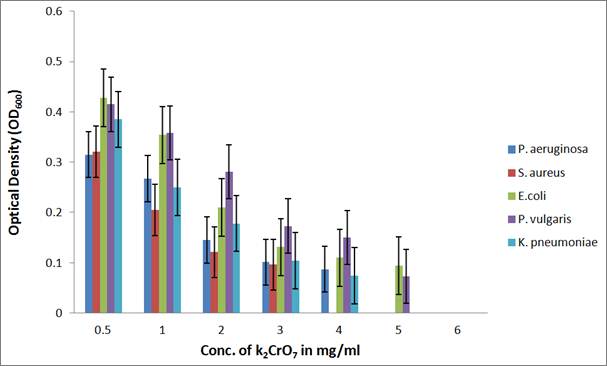 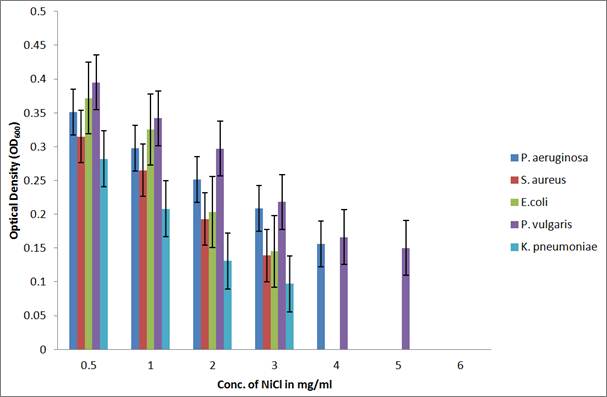 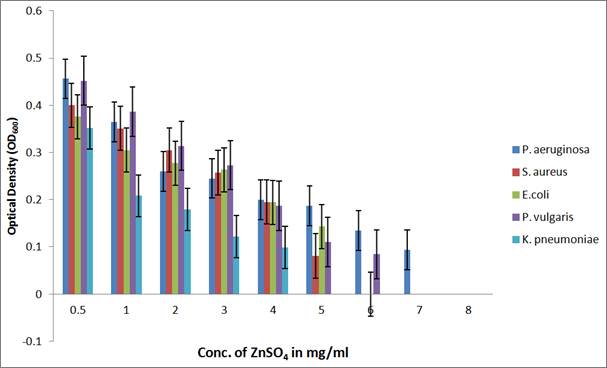 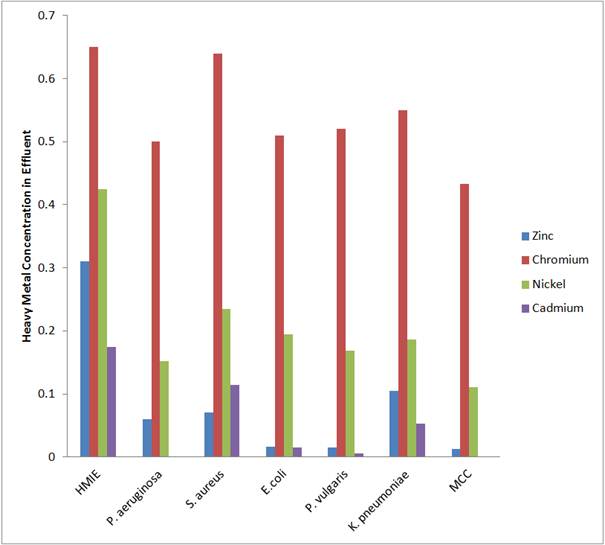 The microbial turbidity decreased with increase in concentration of heavy metals (0.5-8 mg/ml) indicating toxic and inhibitory effect of the heavy metals on the growth of bacteria (Fig. 1, 2, 3 and 4). According to Konopka et al. (1999), the resistance mechanisms employed by the bacteria do not offer protection at extremely high levels of free metal ions and a lethal toxic effect is observed above the critical level. Metal tolerance by the five heavy metals tolerant bacteria in decreasing order was Zn> Ni> Cr> Cd. The higher tolerance levels for Zinc and Nickel could be attributed to their classification as micronutrients that are needed by the bacteria in trace amount (Nies, 1999). According to European Union (2004), Nickel is used in some food supplements which contain micro-grams of Nickel per tablet. Cadmium’s low tolerance by the five bacteria suggests the high toxic effect of this heavy metal which has been reported to be carcinogenic and could also lead to kidney dysfunction (WHO, 2003). Low tolerance to cadmium by the five bacteria isolates in this work among other metals is similar to the report made by Smrithi and Usha (2012) who reported decreasing order of metal tolerance in their research in the sequence Ni> Cr> Cu> Zn> and Cd for isolated heavy metal tolerant bacteria from tannery effluent in Tamil Nadu, India. But at variance from the report made by Amalesh et al. (2012) who stated that the decreasing order for metal tolerance is Cd> Cr> Ni> Co.

The heavy metals reduction by each bacteria isolates in the refinery wastewater revealed P. aeruginosa as the best heavy metal-tolerant isolate followed by P. vulgaris, E. coli, K. pneumoniae and S. aureus (Fig. 5). Pseudomonas aeruginosa showed 100% removal of Cadmium from the refinery wastewater. Momba and Ikonga (2013), in their research observed that Pseudomonas putida showed removal rates of 100% for Thalium, 96% for Lead, 83% for Vanadium, 71% for Cobalt, 57% for Nickel, 49% for Copper and 45% for Manganese. According to Vitri and Giownnetti (2008), Pseudomonas spp. has the ability to degrade heavy metals present in industrial effluent. In general, the Mixed Culture Consortium (MCC) of the five heavy metal-tolerant bacteria showed the highest efficacy for heavy metal reduction in the effluents. The efficacy of removal of the four heavy metals in decreasing order was MCC>P. aeruginosa>P. vulgaris>E.coli>K. pneumoniae>S. aureus. The high bioremediation rate observed in MCC might be attributed to the synergy of metabolic activities by the consortium of five bacteria isolates due to the diversification of enzymatic types amongst the different types which might have enhanced the process than individual isolates with fewer enzymes types.

The five different bacteria isolates showed various level of maximum tolerance to different concentrations of cadmium, chromium, nickel and zinc. The efficacy of removal of the four heavy metals in decreasing order was MCC>P. aeruginosa>P. vulgaris>E.coli>K. pneumoniae>S. aureus. Overall, the mixed culture consortia had the highest percentages reduction of each heavy metal analyzed in the study. Hence, MCC are more effective for bioremediation of heavy metals than single colony bacterium.