Abstract: This study aimed to determine the bacterial tolerance to chromium (Cr6+) in three growth media, such as nutrient broth, Luria Bertani (LB) broth and mineral salt media in terms of Minimum Inhibitory Concentration (MICs). Among the seven metal resistant soil bacteria, Bacillus cereus isolate PGBw4 and Bacillus cereus strain ES-4a1showed highest tolerance against Cr6+ in all three media. Bacillus cereus isolate PGBw4 was used as an effective and environment friendly agent for detoxifying Cr(VI) and reduction study in this research. The bacterial isolate mitigated toxic effects of Cr(VI) more efficiently from 100mg/L to 500mg/L within 24 and 48 hours respectively. The maximum amount of reduction of Chromium (VI) was 70.67 percent at 100 of Cr(VI) mg/L concentration after 48 hours of incubation and the lowest was 42 percent at 500mg/L Chromium concentration after 24 hours of incubation.

Heavy metals contamination is a global environmental concern because it is difficult to remove these contaminants from the environment unlike many other pollutants [1]. These are recognized to be powerful inhibitors of biodegradation activities [2]. The metal elements such as lead, nickel, copper, cadmium, zinc, chromium and mercury are accumulated in different environmental segments and can make toxic effects to the living organisms.

Chromium salts are widely used by tannery industries of Bangladesh and led to large quantities of this element being released to the surrounding environment. Only hexavalent chromium and trivalent chromium are ecologically important because these are the more stable oxidation states. But the chromium (VI) is one of the most dangerous environmental pollutants due to its ability to cause mutations and cancer in biological system. Being mutagenic, carcinogenic and teratogenic, Cr(VI) is approximately 100-fold more toxic than Cr(III) [3]. But recent years this heavy metal is used with large industrial application in textile dyeing, chemicals and pigments production, wood preservation, tanning activity and electroplating for surface treatment [4].

Serious concern about the toxicity of Cr(VI) compounds necessitates the recovery and reuse of chromium from industrial wastes and it is essential to convert the unrecovered Cr(VI) to a less toxic form. Several bacteria have been described as being able to reduce Cr(VI) to Cr(III) under aerobic and anaerobic conditions and the biological transformation of the very toxic Cr(VI) to the less toxic and less mobilized Cr(III) has been reported as an alternative to the physical and chemical approaches [5,6,7]. Accordingly, the decontamination of hexavalent chromium is of great importance. The conventional methods for heavy metals removal from industrial effluents are precipitation, coagulation, ion exchange, cementation, electro-dialysis, electro-winning, electro-coagulation, reverse osmosis [8]; evaporation, solvent extraction and membrane separation [4]. These processes are expensive and present some technological problems, mainly when applied to diluted metal solution. Bio-sorption is a process in which certain types of biomasses, viable or dead, may bind and concentrate heavy metals from aqueous solutions [9]. Microorganisms have a high surface area-to-volume ratio because of their small size and therefore, they can provide a large contact interface, which would interact with metals from the surrounding environment. Chromium (VI) reduction by different microorganisms has been well documented in different studies [10].

The objective of this study was to evaluate the Cr(VI) resistance and Cr(VI)-reducing ability of metal-stressed bacteria.

For evaluation of the sensitivity as MIC [12] to chromium (Cr6+) of seven bacterial isolates, three media such as nutrient broth, LB broth, and mineral salt media with different concentrations of Cr6+(ranging from 250 to 1500µg/mL using K2Cr2O4) were prepared and then the bacteria were cultured readily in screw cap tubes. After 48 hours of incubation the growth of bacteria was confirmed by spreading over 0.1mL of liquid culture of isolates from each tube on nutrient agar plate to test the appearance of growth. Growth of the bacterial culture was determined visually as positive or negative. The absence of bacterial growth indicated its sensitivity, while the presence of bacterial growth in corresponding metal concentrations indicated that bacteria were resistant at those concentrations. All of the experiments were replicated twice.

Chromate reductive activity was determined by measuring the decrease of hexavalent chromium. Chromium (VI) was analyzed by the S-diphenylcarbazide method [13], [14]. The 100mL of LB broth containing varying concentrations (100 to 500mg/L) of Cr(VI) as K2Cr2O7 were inoculated with 1mL of enriched cells suspension and incubated under 30°C for 24 hours. Un-inoculated medium containing Cr(VI) served as controls. Samples were collected at different time intervals up to 48 hours, and centrifuged at 10,000 rpm for 10 min. The supernatant obtained after centrifugation was used to measure Cr(VI) concentration. The Cr(VI) content in each supernatant was determined by measuring absorbance of the purple complex of Cr(VI) with 1, 5-diphenylcarbazide at 540nm using spectrophotometer. The efficiency of chromate reduction was determined in terms of % Cr(VI) reduction by measuring the difference between Cr(VI) concentration at 24 and 48 hours. The rate of reduction of chromium was determined by the following equation.

3.1. Determination of MICs and Metal Resistance of Bacteria

Seven bacterial strains were separated based on high degree of chromium resistance and were used for evaluation of bacterial sensitivity to chromium. Minimum Inhibitory Concentrations (MICs) of all the bacterial strains against Cr6+ in three media viz. in nutrient broth, LB broth and mineral salt media have shown that the strains were sensitive to high concentration of Cr6+ ions and were incapable to grow at that concentrations. The MICs of Cr6+ions of each bacterium in three media are given in Table 1.

In this study, the results of bacterial sensitivity showed that the MIC of identified strains against Cr6+ ranged from 300 to 1300μg/mL in nutrient broth, 400 to 1450μg/mL in LB broth and 200 to 1050μg/mL in mineral salt medium. The bacterial metabolism depends on the composition of media where bacteria are cultured and the composition of growth medium influences the adaptation mechanisms. In the present study the MIC values were found higher in LB broth than that in nutrient broth and mineral salt media. Reference [15] reported that the metal-microbe interactions viz. metal uptake mechanisms and precipitation are largely influenced by the composition of growth media. Reference [16] reported the results of MIC for chromium was 150 to 500μg/mL and for copper 200 to 300μg/mL for different bacteria. The orders of bacterial sensitivity to Cr6+in this study are B. pocheonencis > Micrococcus luteus > B. megaterium > B. amyloliquefaciens > B. subtilis > B. cereus. 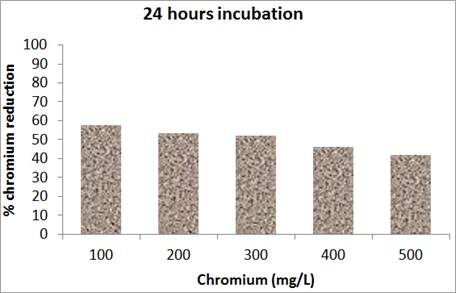 Figure 1. Reduction of chromium (VI) at different concentrations after 24 hours of incubation. 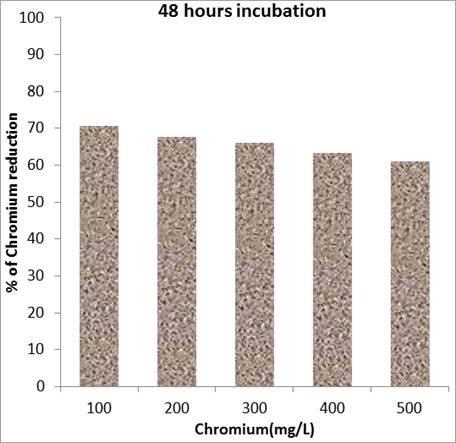 Figure 2. Reduction of chromium (VI) at different concentrations after 48 hours of incubation.

Percent reduction of chromium (VI) was decreased with increasing chromium concentrations (Figure 1 and 2). This is due to the fact that as the volume of inoculums was constant relatively fewer amounts of bacterial cells were available for chromium (VI) reduction from the media, when concentrations were increasing. The lowest amount of reduction (42%) was occurred at 500mg/L of chromium concentration after 24 hours of incubation (Figure 1) but this reduction was increased to 61% after 48 hours period (Figure 2). Reference [18] similarly with Pseudomonad strain CRB5 reported that the reduction rate decreased during the first 24 hours at Cr(VI) concentrations of 30 and 40μg/mL. Reference [19] also reported 99.7% reduction of 112.5μg/mL Cr(VI) by Pseudomonas fluorescence LB300 within a period of 289 hours. The Pseudomonad strain CRB5, however, showed complete reduction of 20μg/mL of chromate after 120 hours [20]. Reference [21] however showed that the rate of Cr(VI) reduction by Pseudomonas putida strain SDCr-5 decrease with time irrespective to initial Cr(VI) concentration used.

The results of this study have confirmed that Bacillus cereus isolate PGBw4 is one of the most promising bacterial isolate that could tolerate and reduce chromium (VI). The rate of reduction has an increasing trend with increasing the incubation time and concentration upto 500mg/L within 48 hours. The highest percentage of reduction was found at low concentration of chromium. In this study, it is also confirmed that the sensitivity of bacterial isolates showed that the MIC of bacterial strains used in this research against Cr6+ was highest in LB broth medium. Information obtained through this study revealed that among various types of chromium resistant bacterial strain of Bacillus and Pseudomonas, Bacillus cereus isolate PGBw4 can be used with other bacteria found by other scientists to mitigate the toxicity effect of chromium in the environmental samples.