Abstract: Condensation of 3-acetylbenzo[5,6]coumarin (1) with hydrazine-carbodithioate esters and/or thiocarbohydrazide gave the corresponding N-[1-(benzocoumarin-3`-yl)ethylidene]hydrazonecarbodithioate (2a,b) and 1,5-bis[1-(benzocoumarin-3`-yl)ethylidene]thiocarbohydrazide (3) respectively. Treatment of 2a with ethanolic ammonia solution and/or amines gave the corresponding thiosemicarbazone derivatives (4a-f). The reactions of 4a-f with ethyl bromoacetate/AcONa and ω-bromo derivatives were investigated, where thiazolidinones 5, 6 and thiazoles (9a,b) were obtained. Moreover, hydrazonecarbodithioate (2) underwent heterocycliczation upon treatment with hydrazonoyl halides (10) with Et3N to give the corresponding 2,3-dihydro-1,3,4-thiadiazoles (11a-d) via 1,3-dipolar cycloaddition and/or nuclophilic substiution. The structures of the new derivatives were elucidated by elemental analysis, IR, PMR and mass spectra.

Coumarin nucleus is found in a variety of natural products exhibiting various pharmacological effects. Derivatives of coumarin also form component of important drugs having varied properties. There are excellent monographs and review articles [1-5] describing the structure, synthetic reaction and properties of coumarins. Neumerous reports in the literature describing antimicrobial [6, 7], antiradiation [8, 9], anti-coagulants [10-12] and their biological activities [13, 14]. 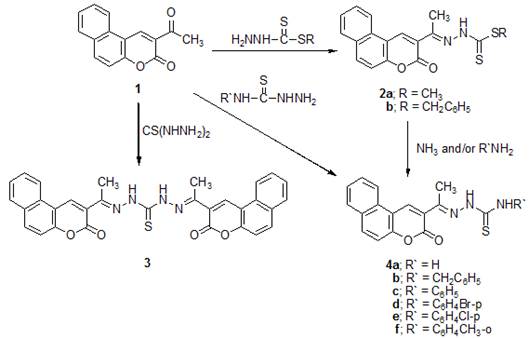 These products were obtained directly from condensation of 1 with thiosemicarbazide derivatives (m. p and mixed m. p and identical spectra). The mass spectrum of 4c showed no molecular ion peak, but the loss of C6H5NH2 fragment support the proposed structure. Cyclocondensation of 4a-f with an equimolar ratio of ethyl bromoacetate afforded the corresponding thiazolidin-4-one derivatives 5a-f respectively. Treatment of 4a with two moles of ethyl bromoacetate gave N-ethoxycarbonylmethyl-thiazolidin-4-one derivatives (6). The structure 6 was further confirmed unequivocally by an independent synthesis from 5a and ethyl bromoacetate in ethanolic AcONa (Figure 2).

Condensation of 5c with different aromatic aldehydes gave the corresponding arylidenes 7a-c (Figure 2). These products 7a-c could be alternatively prepared by the reaction of 5c with arylidene malononitriles under Michael reaction conditions (Figure 2). Treatment of 4a with phenacyl bromide and/or 3-(2-bromoacetyl)benzocoumarin (8) gave the corresponding hydrazonothiazole derivatives (9a,b) respectively (figure 2). 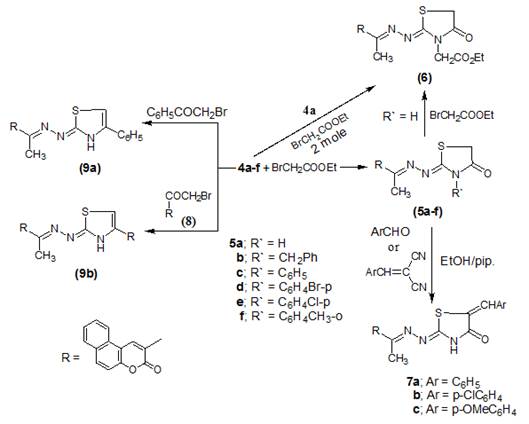 Interaction of hydrazonecarbodithioate 2a,b with hydrazonyl halides 10a-d in ethanol containing triethylamine gave the corresponding 2,3-dihydro-1,3,4-thidiazoles 11a-d. The formation of 11 can be rationalized via elimination of alkyl mercaptan from the corresponding cycloadduct B, which is assumed to be formed from 1,3-dipolar cycloaddition of nitrileimines to the thiocarbonyl double bond. Also, alternatively, the formation of 11 can be explained by a stepwise involving substitution to give a cylic hydrazone A, which was readily cyclized to afford the cyclic adduct B (Figure 3). 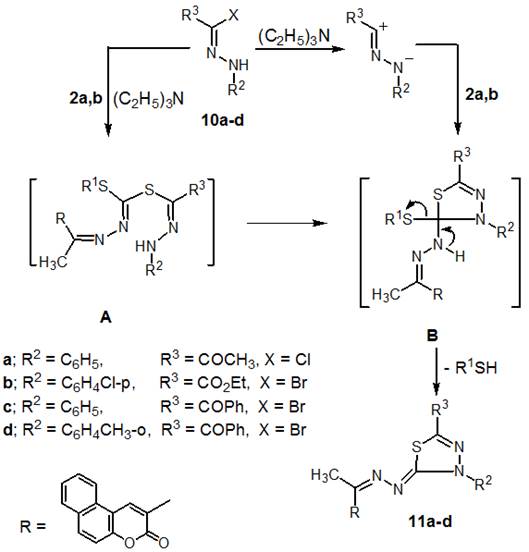 The above structures were established from elemental analysis (table 2,3) and spectral data. Also, the mass spectra fragmentations added further support to the proposed above structures 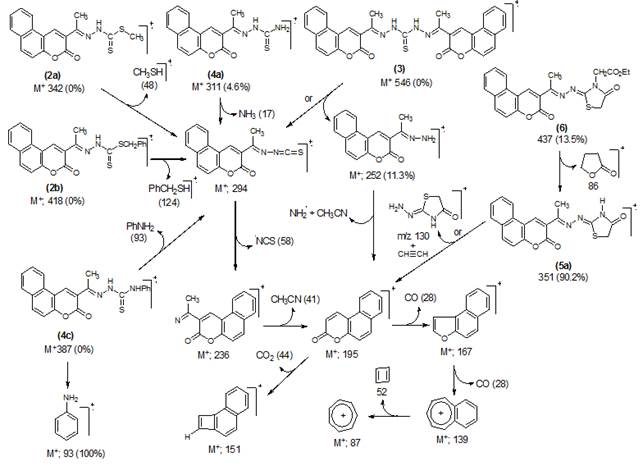 Figure 4. The proposed pathway fragmentation for the EI spectra of substituted benzocoumarin-3`-yl derivatives 2a, b, 3, 4a, c, 5a and 6.

The most important peaks observed in the mass spectra of the substituted benzocoumarin-3`-yl derivatives 2a, b, 3, 4a, 4c, 5a and 6 are listed in (table 1) and are arranged in columns according to the presumed composition. In the EI spectra the molecular ion of compounds 2a,b, 3, 4c are not detected but the corresponding detected fragment ion was formed by elimination of the methylmercaptan, benzyl-mercaptan, aniline and 3-acetylbenzocoumarin hydrazone as neutral fragment, respectively. Also, the molecular ion was detected at low intensity for compounds 4a and 6, these peaks undergoes further fragmentation to the main fragment ion (m/z 294) by the elimination of NH3 in case of compound 4a and to the base peak (m/z 351) by the elimination of γ-butyrolactone (C4H6O2) for compound 6. The mass spectrum of compound 5a is characterized by molecular ion at high abundance. The main fragment at m/z (294) undergoes fragmentation by successive elimination of NCS, acetonitrile, CO, CO2), and cyclobutadiene. The elimination of thiazolid-inonehydrazone fragment cation at m/z (130) as very intense peak exhibit benzocoumarin cation fragment m/z (195) which underwent further fragmentation.

A mixture of 3-acetylbenzo[5,6]coumarin (0.01 mol) and alkyl hydrazine carbodithioate (0.012 mol) in ethanol (50 ml) was refluxed for one hour. The separated solid on heating was filtered off and recrystallized from the proper solvent to give (2a,b), (Table 2).

A solution of 3-acetylbenzo[5,6]coumarin (0.01mol) in dioxane (30ml) and aryl or alkylthiosemicarbazides [18, 19] (0.01mol) was refluxed for 2h. After cooling, the solid product which formed was collected and recrystallized from the proper solvent to give 4a-e, m.p. and mixed m.p. determined with authentic sample gave no depression (Table 2).

A mixture of (5a; 0.01 mol), the appropriate aromatic aldehydes and / or arylidenemalononitrile (0.0.1 mol) in dioxane (30 ml) and few drops of piperidine was refluxed for 3h, the solid product was collected by filtration and recrystallized from DMF to give 7a-c, (Table 2).

A mixture of (4a; 0.01 mol) and phenacyl bromide or bromoacetyl-benzocoumarin20 (0.01 mol) in ethanol (50 ml) was refluxed for 2hrs, the solid product which formed on heating was collected by filtration and recrystallized from the appreciate solvent to give 9a,b, (Table 2).

3.8. Reaction of 2a,b with Hydrazonoyl Halides

In this study, N-[1-(benzocoumarin-3`-yl)ethylidene]-hydrazineecarbodithioate (2) it is very good starting material for the synthesis of 1,3,4-thiadiazole,thiazolidinone and thiazole derivatives which containing coumrin moiety which posses biological activity. However further studies are needed to complete these study for the biological activity.