Leprosy is an infectious disease caused by the slow growing bacillus, Mycobacterium leprae. It is most probably spread as a droplet infection. Like many other infections, leprosy can be treated using multidrug within six to twelve months [1]. Leprosy can affect people of any age or sex, including infants.

Leprosy is a chronic infection caused by the bacteria Mycobacterium leprae and Mycobacterium lepromatosis [2]. Initially, infections are without symptoms and typically remain this way from 5 to as long as 20 years. Symptoms that develop include granulomas of the nerves, respiratory tract, skin, and eyes [3]. Health seeking behavior is a recent popular concept, which tries to understand the cause behind delayed treatment process [4]. It is also important issue in medical Anthropology. What kind of treatment one individual will take totally depend on health seeking behavior. If we want to make a healthy country we should understood the health seeking behavior of the patients. Lack of knowledge on health seeking behavior will hamper healthcare facility. Most of the people of our country go to quack because they are not conscious about proper treatment. Though, in this part of the globe leprosy is decreasing [5], but like Bangladesh some countries has still getting more than thousand new cases each year. Bangladesh ranks fourth in the world as a leprosy-burdened country after India, Brazil and Indonesia, according to official records [6]. So it is necessary to study about leprosy.

Leprosy usually starts as a patch on the skin, but it can also attacks the nerves and damage them. If you do not treat leprosy this nerve damage can bad to problems in the face, hands, and feet. But if you take care of people with leprosy, most permanent damage can be prevented. Globally in 2012, the number of cases of leprosy was 180,000. In 2011, the approximate number of new cases diagnosed was 220,000[7].

Rajshahi division, located in the north-west of the country, is one of the oldest and historically important areas of Bangladesh (Figure 1). An estimated population of 853,000 people [8] with total area of 96.69 km [2] (37.33 sq. miles) lying beside northern banks of the river Padma. A quality treatment facility developed over decades in the city. Patients from surrounding district come to Rajshahi for quality health care service.

3.1. Patient Awareness and Consciousness About Leprosy

Most of the cases patient thinks that it is a skin disease. At the first time they never think that it is leprosy. After medical test, they are able to know that she/he is affected by leprosy. Before knowing about leprosy, they take different kind of treatment. 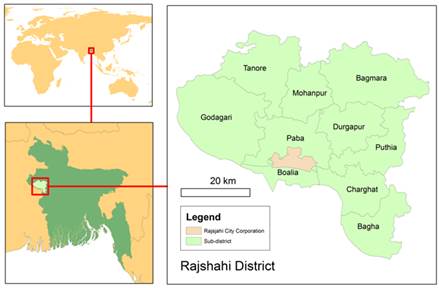 In our study, Husna Ara Begum age 34, in Rajshahi District. They have two girls and one boy. Suddenly Husna Ara found some white spots on his face. She just thinks that those are the normal spots. She was using different creams and medicines from quack. They didn’t recognize that those are the leprosy. Suddenly her girl attacked by pneumonia that why her girl admitted in the Rajshahi Hospital. In the Rajshahi Hospital one doctor of DOTS corner watch those spot of Husna Ara. The doctor said Husna Ara to come DOTS corner. And some time later, she goes DOTS corner and the doctor completes some test. After testing, Husna Ara came to know that she got leprosy.

Knowledge gap is hampering the health seeking behavior on leprosy patient. While around one third of the leprosy patient delayed to take proper treatment in Lusaka of Zambia, there we found that patients delayed on average six month in study area[10]. People never like to share anything. They didn’t like to share about the information of leprosy. Sometime, they learn when they recognized that he/she is attacked by leprosy. They learn something from the medical center or DOTS corner. They do not know the symptoms of leprosy and how to recognize it in primary stage.

3.1.3. Patient Confused About Curability of Leprosy

Leprosy patient under medication are often confused about the curability. They are just taking medicine because it free. When they taking medicine long time and their position remain stable and they think that it will not cure. They have a dilemma that it will cure or not.

In other study, Ariful Islam is 15. One day Mr. Islam having rice with his parent. His mother noticed that, He can’t able to grasp rice fully because he’s having some crack in Right hand finger. Sometime later, they knew that it is leprosy. Doctor gave medicine for one year. Mr. Islam completed medicine one year. But, at present time doctor stops giving medicine to Mr. Islam. Now, his father didn’t know that it will cure or not.

3.1.4. Seeking for Different Kind of Treatment of Leprosy

Table 1 shows that, almost half of the total patients depend on salve (Ointment). Another one third patients took homeopathy treatment. Only 5% leprosy patients go to regular medical hospital.

Stigma is common in chronic health condition like leprosy[11]. Often we found that, leprosy patients didn’t disclose about their disease because of stigma. They always try to hide about leprosy. Patients experience anxiety and try to avoid social contact on this issue. Most of them try treatment secretly.

Moreover, we found a patient, Asifa Banu age 28 live in Guripara, Boalia thana in Rajshahi. Asifa knows form DOTS corner that she is attacked by leprosy. But she didn’t say about it in the village. Because, she thinks that people will never take it easily. So, she was taking treatment secretly. But some of neighbors know that Asifa have some spots on her body. One day, suddenly, Atikul mother found some white spot in Atikul’s body and Atikul’s mother asked Asifa what kind of treatment she takes but Asifa said nothing about it. Atikul mother makes gossiping about it with another neighbor. One of the neighbors said that, she should take Asifa in medical college hospital. Later, Atikul’s mother went to that place of Medical Hospital. Finally, they knew about DOTS Corner and leprosy.

Leprosy has a local dialect. Most of the people of Rajshahi called Shaik Daoud. Locally, Shaik Daoud means they touched (shaik) by Hindu (Traditional Religion) people.

They firstly belief that if they touch the spots by Hindu people it will recover. But it didn’t recover because it is leprosy. It need to MDT (Multi Drug Treatment) to recover.

3.2.2. Some Person Believe That It Transmits Generation to Generation (Hereditary)

Some of the respondents believe that, leprosy transmits generation to generation. They said that it would continue from one generation to another. Menara Begum is 28 and her husband Shohag Hossain live in Guripara in Boalia thana in Rajshahi. Menara’s son Atikur was attacked by leprosy she known it from DOTS corner. Mennara said that, Atikur Grandfather has leprosy. That time she did not understand because she didn’t know leprosy that time. At present, he can remember that Atikur’s grandfather died for leprosy. She said that long time before there was dispute between Atikur grandfather and Kinman. Once upon a time, Kinman attacked Atikur’s grandfather for land dispute and Atikur grandfather broke his hand but he didn’t feel it. Because, he has no sense in his hand. Atikur mother told, that’s why Atikur attacked by leprosy. And she believe that it transmits generation to generation (Hereditary).

One of the respondents said that it is related with jinn (an invisible spirit mentioned in the holy Quran and believed by Muslims to inhabit the earth) and monster (petni). After coming or attacking this monster (petni) they are attracted by leprosy. Patan Buri aged 42 lived in Guripara in boalia Thana in Rajshahi. She said that he attacked by gen. One day suddenly she attacked by leprosy. She said that one day something different or bad air came in her house. She said that something still is belonging to her house. He wants to said that leprosy is caused for supernatural power.

Some respondents believe that, it is the punishment for their earlier sin. They also think that medical hospital has nothing to do with it. That’s why they didn’t like to go medical hospital for proper treatment.

Man live in society. They are not out of society. They always think about society and people of the society. If people attacked by leprosy, they never like to disclose about their disease. Because the society people never take leprosy as a good thing, that thing always influences the health seeking behaviors of leprosy.

In our research area, we found some short of different scenario. Some place man help to take treatment. And some place makes a distance with them. Some time they cut-off relation with them. Lilufa Begum age 38, lived in Mirzapur, Binodpur bazar, Rajshahi, His husband name is Faruk. They have two daughters. Their conjugal live was going very well. She has some spots on her face, when his husband knew that those are leprosy. His husband cut off relation with her. Now she is living with two daughters.

The table 4 shows that, at first step most of patient took salve (Ointment), because they thought, it’s a skin disease. At least half of the patients thought like so. 35% patients took homeopathy and 10% patients went to Indigenous physician (Herbal treatment) for treatment.

The most of the respondents are poor. What kind of health care women will take depend on male decision such as father, husband or brothers? Habib Mondol 52 in age lives in Mirzpur, Binodpur, Rajshahi. His wife name is Romesa Begum age 42. Romesa found some spots in her skin. At the first time she said to her husband. His husband first time provides some salve (Ointment). After using three month, it remains same. So she said to her husband again. That time he provides some homeopathy medicine. After some time leter Habib mondal Brother’s son said that it should be leprosy, you should go medical college. Now they take treatment from medical hospital.

So, that’s why, we can say that different health seeking behaviors for male and women.

Economic factors are found influential regarding health seeking behavior on leprosy treatment in the study area. We found cost of the healthcare is primary concern prior to treatment.

During the field work it’s found that, rich people take quicker treatment in comparison to poor people. They go to quickly qualified doctor and those who poor taking treatment from Homeopathy and Kobiraj (Traditional treatment). They go for healthcare center at very last.

We also found that, most of the patients used to take other than medical treatment like homeopathy, Kobiraji etc., because, they were unconscious about leprosy. After recognizing leprosy, they get admitted "DOTS Corner" under Rajshahi medical college and take a free treatment from Damien Foundation and Bangladeshi government.

When a leprosy patient taking MDT from any medical hospital center. They face different kind of problem. But some person has no problem when they take MDT.

Table 7 shows that, about 10% patients respectively said that, they lose their eye’s power and face allergic symptom after taking MDT. 15% respondent respectively face headache and white skin became black. And Only 45% respondent said that they have no side-effect.