Abstract: Calcium carbonate (CaCO3) is widely used in pharmaceutical industries and as a supplement in probiotics. The present study was designed to evaluate the effect of biofield energy treatment on the physicochemical properties of the CaCO3. The CaCO3 powder was divided into two parts and referred as control and treated. The control part was remained untreated, whereas treated part was subjected to Trivedi’s biofield treatment. The control and biofield treated samples were characterized using X-ray diffraction (XRD), particle size analyzer, surface area analyzer, thermogravimetric analysis (TGA) and Fourier transform infrared spectroscopy (FT-IR). The XRD showed that the crystallite size of treated CaCO3 was increased up to 100% as compared to the control. In addition, the lattice strain was reduced in treated sample as compared to the control. The particle size analysis result showed that the average particle size was significantly changed after treatment that led to considerably enhance the specific surface area of treated CaCO3 powder by 95% as compared to the control. The FT-IR spectroscopic analysis of the treated calcium carbonate showed shifting of wavenumber attributed to symmetric stretching vibrations of carbonate ion to higher wavenumber as compared to the control. The TGA analysis showed reduction in weight loss and increase in char yield which may be due to the increase in thermal stability of the treated sample. Therefore, the biofield treatment had significantly altered the physicochemical properties of the calcium carbonate. Hence, it is assumed that treated calcium carbonate could be used as a potential supplement of probiotics for food applications.

The association of probiotics with wellbeing is established since time immemorial. Almost a century ago Henry Tissier reported that gut microbiota of healthy breast-fed infants were dominated by rod bifid (bifidobacteria) shaped bacteria which were absent in infants suffering from diarrhea, establishing the concept that they play a vital role to maintain human health [1]. Thus probiotics are known as microorganisms which can confer good health to host when administered in adequate amount. It was reported that human gut contains 1014 bacterial cells which is 10 folds higher than the number of cells present in the human body [2-4]. The reported beneficial effect of probiotics consumption are improvement of intestinal health, alleviate the symptoms of lactose intolerance and minimize risk of other diseases [5,6]. Nevertheless, the imbalance of intestinal microbiota may cause health problems such as inflammatory bowel diseases, diarrhea, colon cancer, hypercholesterolemia, etc. [7]. There are various probiotics based products that are available in the market. Yoghurt is perhaps the most common food [8] which is used to carry probiotics to the human gut. Additionally, some other products are used to carry probiotics are calcium, cheese, fermented milk, etc. Recently it was reported that calcium helps the bacteria to stick more properly to the intestinal wall. Specifically, calcium carbonate (CaCO3) is used commonly to lower the acid and to maintain the adherence of probiotics [9]. Zhao et al. reported that addition of alkaline salts such as calcium carbonate in skimmed milk substantially increased the viable count of L. bulgaricus as compared to the control sample [10]. Nevertheless, calcium carbonate has less solubility in water, hence it has less bioavailability in the human gastro intestinal tract. Tang et al. reported the increase in solubility of calcium when it was fermented with seven different strains of lactobacillus species [11]. Therefore some novel methods should be devised to enhance the solubility i.e. bioavailability of calcium that can improve its food applications. Recently, biofield energy treatment has effectively modified the physicochemical properties of organic product [12], drugs [13], metal [14,15] and ceramic [16]. Due to low solubility of CaCO3 and its application as supplement in probiotics, authors wish to investigate the influence of biofield energy treatment on CaCO3.

The National Center for Complementary and Alternative Medicine (NCCAM), a part of the National Institute of Health (NIH), recommends the use of Complementary and Alternative Medicine (CAM) therapies as an alternative to the healthcare sector and about 36% of Americans regularly uses some form of CAM [17]. CAM includes numerous energy-healing therapies; biofield therapy is one of the energy medicine used worldwide to improve the health [18].

Willem Einthoven had developed electrocardiography (ECG) to measure the biofield of human body. Afterward, the Harold Saton Burr, had investigated the correlation of electric current with human body. Thus, human has the ability to harness the energy from environment/Universe and can transmit into any object (living or non-living) around the Globe. The object(s) always receive the energy and responding in a useful manner that is called biofield energy. This process is known as biofield energy treatment. Mr. Trivedi‘s biofield energy treatment (The Trivedi Effect®) has known to modify the physical, atomic, and thermal characteristics of various things associated with several scientific fields such as microbiology [19], and agriculture [20].

The CaCO3 powder used in this experiment was procured from the Sigma-Aldrich. The sample was divided into two parts; one was kept as a control sample while other was subjected to Trivedi’s unique biofield energy treatment and coded as treated sample. The treated group was in sealed pack and handed over to Trivedi for biofield energy treatment under standard laboratory conditions. Trivedi provided the energy treatment through his energy transmission process to the treated group without touching the sample. The control and treated samples were characterized by using X-ray diffraction (XRD), particle size analyzer, surface area analyzer, thermogravimetric analysis and Fourier transform infrared spectroscopy (FT-IR).

The XRD analysis of control and treated CaCO3 were carried out on Phillips, Holland PW 1710 X-ray diffractometer system, which had a copper anode with nickel filter. The radiation of wavelength used by the XRD system was 1.54056 Å. The data obtained from this XRD were in the form of a chart of 2θ vs. intensity and a detailed table containing peak intensity counts, d value (Å), peak width (θ°), relative intensity (%) etc. The average crystallite size (G) was calculated by using formula:

Here, λ is the wavelength of radiation used, b is full width half-maximum (FWHM) of peaks and k is the equipment constant (=0.94). Percentage change in average crystallite size was calculated using following formula:

where, Gc and Gt are the average crystallite size of control and treated powder samples, respectively.

Here, d50_t and d50_c were the average particle size d50 of treated and control samples respectively. Similarly the percent change in d99 was also calculated and presented.

Here S_t and S_C were the surface area of treated and control samples, respectively.

The thermal stability of control and treated calcium carbonate were analyzed by using Mettler Toledo simultaneous TGA and Differential thermal analyzer (DTA). The samples were heated from room temperature to 400ºC with a heating rate of 5ºC/min under air atmosphere.

XRD is a non-destructive and quantitative technique, which has been extensively used to study the crystal structure parameters of any compound. The XRD diffractogram of control and treated CaCO3 samples were presented in Fig. 1. The XRD peaks observed in control and treated sample were well matched with the reported value in Joint committee on powder diffraction Standards (JCPDS) card number 88-1807 for CaCO3 powder [21]. The most intense peak was observed at Bragg angle (2θ) 29.15° in control; however it was found at 29.20°, 29.33°, 28.92°, and 29.01° in the treated samples T1, T2, T3 and T4, respectively. This peak was corresponding to the crystalline plane (104) in control and treated samples. Moreover, the lattice strain along this plane was calculated using following equation: 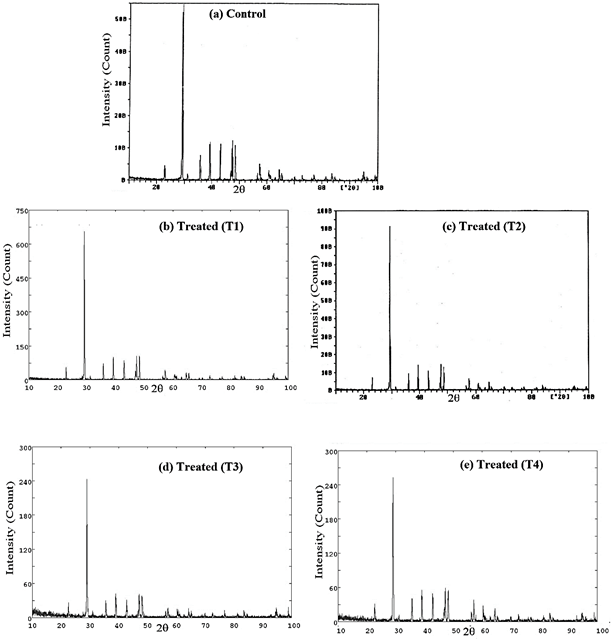 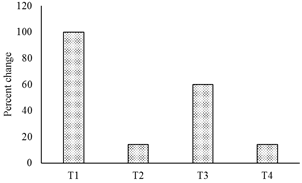 However, to break the particles, a sufficient amount of stress energy is required and that depends upon the size and the type of material [23,24]. Typically, the CaCO3 powder exists as primary particles, which linked to each other through solid bonding. Muller et al. reported that stress energy required to breaking down the primary particles is much higher than the aggregates and agglomerates [25]. It is possible that the energy, which probably transferred through biofield treatment induce the milling in treated CaCO3 sample. Nevertheless, the particle size d99 was enlarged in most of the treated samples, which was contrary to the reduction of d50 after treatment. It is assumed that cold welding and agglomeration process took place in treated CaCO3 samples [26]. Further, the effect of change in particle size through biofield energy treatment on surface area was examined. 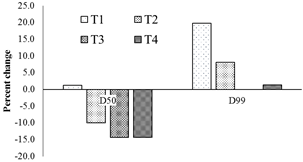 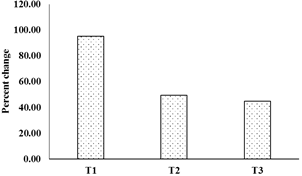 Fig 4. Effect of biofield energy treatment on the surface area of calcium carbonate.

Where, D is diffusion constant, Cs and C are the concentration in the bulk dissolution medium and diffusion layer surrounding the solid, respectively, L is diffusion layer thickness. The equation suggested that the rate of dissolution of a compound can be modified through altering the surface area. The bioavailability of calcium from food is an important concern because calcium intake in our food is low and most of the calcium available in food is chemically bonded to other dietary constituents and must be released in a soluble form [28-30]. Hence, in this regard, the significant increase of surface area in treated CaCO3 could increase the rate of dissolution in human gastro intestinal tract. Thus, the higher dissolution of treated CaCO3 in the human gastric fluid, make it easily available for absorption in the body and that may lead to increase the bioavailability of the treated CaCO3 as compared to the control. It is assumed that high dissolution of calcium carbonate might improve its potential as probiotic supplement for food applications. 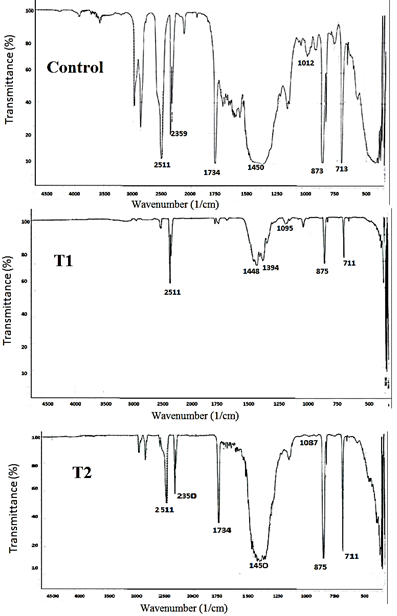 In addition, the peak attributing to asymmetric stretching of carbonate ions was shifted to higher wave number in T1 as compared to the control i.e. 1450 →1448 cm-1. Based on the alteration in absorption wavenumber in T1 and T2, it is assumed that the biofield treatment might alter the bond force constant in the treated calcium carbonate. 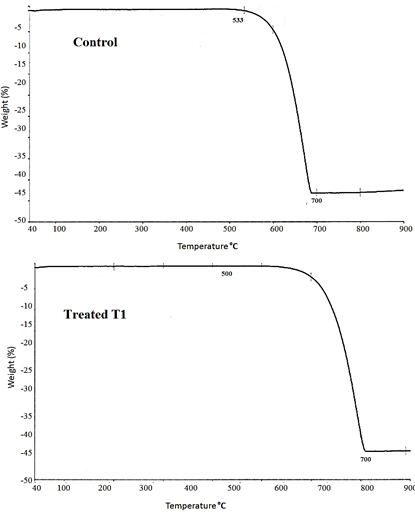