Intention to leave is an employee’s plan of predisposition to leave the organization where one is presently employed [1] and look forward to find another job in the near future [2]. Although intention to leave does not necessarily mean actual employee turnover, it has been found to be a strong predictor of actual turnover [3,4].

Health professionals’ turnover is the most pressing problem of the health system of developing countries [5]. Turnover intention of health professionals from public health facilities can be a symptom of low job satisfaction, poor management, and lack of organizational support [6,7]. Job dissatisfaction is a primary predictor of health professionals’ intention to leave [8,9]. Other predictors of intention to leave vary from low salaries and fringe benefits [1,10], to career advancement prospects [9,11], lack of involvement in decision-making, poor management, poor benefits, lack of job security, and poor recognition [12,13].

Attrition of health professionals is most severe in Sub Saharan African countries. About 1.3% of the world’s health workers care for people who experience 25% of the global disease burden [14,15]. There should be optimum number and professional mix of human resource for the effective coverage and quality of the intended services [14]. In countries, like Ethiopia, having many people affected with HIV/AIDS and attrition of health workers places a ‘double burden’ [16]. Thus depletion of health professionals from public health facilities affects the capacity of the health system to maintain adequate coverage, access and utilization of services [17]. For public health institutions to function effectively and efficiently a well trained, motivated and well functioning health workforce must be produced, deployed, maintained, and appropriately utilized towards the goal of improving the health of the population [18].

Ethiopia, as any other sub Saharan African countries, suffers from attrition of health professionals from rural areas, in which 85% of the population lives. In 2009, nationally the total number of health workers significantly increased to 66314; however, what had been gained over the last five years was lost [18]. The national health worker ratio per 1000 population is only 0.84 (in 2009). This result is far less than the standard set by the World Health Organization of 2.3 per 1000 population [18]. As a result, Ethiopia’s health system has faced a variety of human resource problems, primarily an overall lack of personnel in key areas, which is worsened by high number of trained personnel leaving public health facilities. Furthermore, those personnel who remained are inequitably distributed between urban and rural areas. This in turn kept the health outcomes and health service indicators of the country among the worst in the world [19].

Despite the efforts of the Ethiopian government to train and deploy more than 30000 health extension workers in rural villages and to train more than 5000 health officers between 2005 and 2010, the attrition of high-level health workers has significantly compromised the health care delivery system, especially at higher delivery points [20,21,22]. Thus, inadequate number and mix of health workforce contributed to the general deterioration of health indicators [20,21].

Facility based cross-sectional study design was employed in Public Health Facilities of Gambella Region from April 12 to May 26, 2012. Gambella, which is a capital city of the region, is located 777 km away in the southwest of Addis Ababa, capital of the country. The region is characterized by hot and humid climate. Administratively, the region was divided into three zones, one special woreda (district) and thirteen ordinary Woredas. In 2012, the total number of health workers in the region was about 995, including 364 health extension workers [23]. The region had 21 functional public health centers, and one hospital which provide services for more than one year. Out of these facilities, 11 health centers were randomly selected from rural districts, and the only hospital (i.e. Gambella Hospital) was automatically selected from the only city and included in the study to represent the whole region. Then all health professionals (256) working in the selected facilities were included in this study.

The study was carried out after getting approval from the ethical clearance committee of Jimma University, collage of Health Sciences. Then, permission was obtained from Gambella Regional Health Bureau (GRHB), Zonal Health Departments and Woreda Health Offices. Before commencing the interview, informed verbal consent was obtained from all study participants after explaining the objective of the study to the participants.

A structured, pre-tested and self-administrated questionnaire was used for data collection. The questionnaire was adopted from similar study conducted somewhere else in the country [24]. It has three major components: socio-demography, perception and feeling on working condition, push and pull factors. Pretest was conducted on 5% of the main sample size in Abol health center that was not selected for the main study to ensure clarity and consistence of the questions.

After the completion of data collection, cleaning, editing and coding were done; then the data were entered and analyzed using SPSS version 16.0. Descriptive statistics was used. Mean and standard deviation were analyzed for continuous variables while frequency distribution was used for categorical variables. Bivariate and multivariate logistic regression analyses were run to determine the effects of independent variables on the outcome variable while simultaneously controlling for potential confounding factors. Variables which were emerged statistically significant on the bivariate analysis at p-value <0.05 were fitted in multivariate logistic regression model. Variables which showed association in multivariate analysis were considered as final predictors of intention to leave. The strength of association between different exposure variables and the outcome variable was determined by adjusted odds ratio.

A total of 256 health professionals were enrolled in the study from different professional categories. Of which 252 returned the questionnaire yielding a response rate of 98.4%. Among these, one hundred seventy (67.5%) were males. The median age of respondents were 25 years, and majority (206 (81.7%)) were between 20 and 29 years old. About 76% of respondents were diploma and certificate holders, 52.4% were married, and 68.3% were working in health center. More than half (149) of them were nurses. The median service year of the respondents were 3, and 40.9% had work experience of 2 years and less (Table 1).

3.2. Magnitude of Intention to Leave

Among the total respondents, 122(48.4%) intended to leave the public health facilities of the region within the coming one year. With regard to their plan where to join after leaving the current health facilities, 58.2% disclosed that they planned to join NGO, 15.6% to move to another region, 14.8% to join private health institutions while the rest had other plan such as running personal businesses, leaving out of the country, or continuing their education. Among the respondents who had intention to leave, 96.7% believed that they would have better job opportunity elsewhere if they left the current institutions (Table 2).

3.3. Magnitude of Intention to Leave Versus Socio-demographic Factors

3.4. Magnitude of Intention to Leave Versus Push and Pull Factors

Descriptive analysis on push and pull factors showed that, the magnitude of intention to leave was higher for those who were dissatisfied with their work (86.2%), staff (84.8%), salary (78.8%), management practice (75.8%), incentive (75.8%), educational opportunity (76.0%), working environment (76.3%,), and those who were not participated in decision making process (76.0%) as compared to those who were satisfied with the above mentioned factors and those participated in decision making process respectively (Table 4).

Crude analysis of socio-demographic variables on binary logistic regression showed that marital status, educational level, and years of experience had statistically significant association with intention to leave at p<0.05. While among the organizational and environmental variables (push and pull factors), status of involvement in decision making, status of existence of performance evaluation, status of satisfaction with ones work, staff, salary, management practice, incentive, educational opportunity, and working environment had shown statistically significant association with health professionals intention to leave at p<0.05. On the other hand, age, sex, ethnicity, religion, type of facility, and profession of the respondents did not show statistically significant association with intention to leave in the bivariate analysis (Table 5).

Table 4. Magnitude of Health Professionals’ Intention to Leave versus Push and Pull Factors from Public Health Facilities in Gambella Region, 2012.

A multivariate analysis involving all associated variables was performed to identify independent predictors of intention to leave. Consequently, four variables were found to have statistically significant association with intention to leave after adjusting for confounders. Thus level of education, status of satisfaction with work and salary, and status of involvement in decision making independently showed statistically significant association. The other variables were not significant at p-value < 0.05.

Those health professionals whose educational level were first and second degree had 2.08 times more likely to have intention to leave from the public health facilities compared to diploma and certificate holders (AOR = 2.82, 95% CI: 1.69, 4.69). In addition, those of respondents who were dissatisfied with their work and salary had 4.51 and 5.64 times more likely to show intention to leave public health facilities as compared to those who were satisfied with their work and salary respectively (95% CI: 1.844, 12.366, and 2.216, 11.386 respectively). Moreover, respondents who were not involved in decision making had 2.44 times more likely intention to leave from the public facilities compared to those who participated in decision making (AOR = 2.58, 95% CI: 1.12, 5.92) (Table 6). 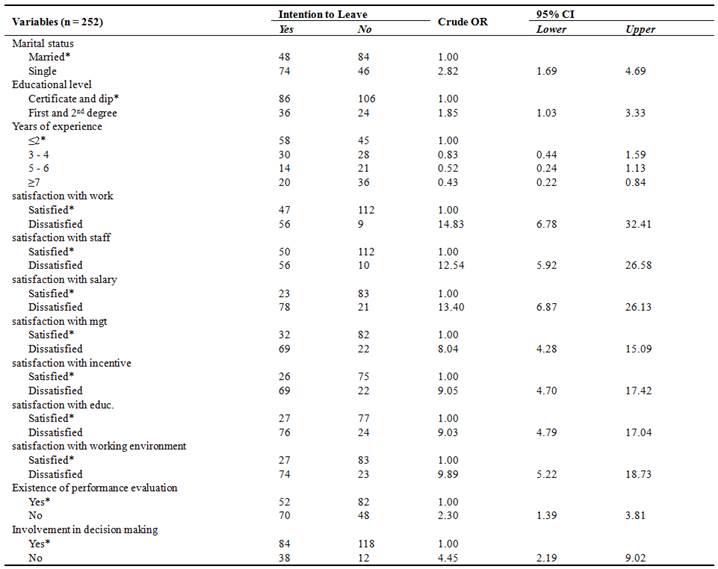 The results of this study indicated that 48.4% of the health professionals reported intention to leave from the public health facilities of Gambella Regional State within the coming one year. This proportion is higher as compared to a study conducted in Jimma University specialized hospital (15.4%) [25]. This might be attributed to the climatic condition and geographical location of the region, which is far from capital city and characterized by hot weather condition. Majority of the participants who indicated an intention to leave the public health facilities of the region prefer to join NGOs (58%), other region (18%) and private sectors (16%). A study done in Eastern Ethiopia and Jimma University Specialized Hospital (southwest Ethiopia) also showed that private health sectors and NGOs were the most common destinations of health professionals after leaving the public health facilities [24,25]. This might be due to the existence of attractive salary and incentive in NGOs and private sectors as compared to public health facilities. This is supported by the fact that about 96.7% of those health professionals who reported intention to leave perceived that there would be better job opportunity elsewhere if they left the current institution.

Findings from multivariate analysis revealed that educational level, status of satisfaction with work, and salary and status of involvement in decision making process were found to be an independent predictor of intention to leave from public health facilities after adjusting for confounders. The other variables were not significant at 5% level of significance.

There is high level of health professional’s intention to leave from public health facilities of Gambella Regional State which can enormously affect the quality and coverage of health services in the region. Educational level, satisfaction status with work, satisfaction status with salary, and status of involvement in decision making process appeared to be independent predictors of health professionals’ intention to leave. Thus, health professionals who were more likely stay in the public health facilities were less qualified with their education, those who satisfied with their work and salary and those involved in decision making process.

The authors thank all the study participants.