Abstract: Background: Most enteric bacteria are harmless but species which belong to Salmonella, Shigella, Yersinia and certain strains of Escherichia coli are pathogens. The emergences of increased antimicrobial resistances are global challenges, particularly in developing countries due to misuse of antimicrobial agents. This study was aimed at determining the prevalence and antimicrobial sensitivity patterns of enteric bacterial pathogens isolated from food handlers in Jimma Town, Ethiopia. Methods: A cross-sectional study was conducted from July 16/2012 to November 23/2012 among 218 food handlers. Structured questionnaire was used to assess associated factors for enteric bacterial infection. Stool samples were collected andantimicrobial sensitivity tests were done using Mueller Hinton Agar (MHA) by Kirby-Bauer disc diffusion method following standard procedures. Descriptive statistics were performed using SPSS version 16.P-values less than 0.05 were considered as statistically significant. Results: The prevalence of enteric bacterial pathogens was found to be 6.9% (15/218). All S. typhi isolates showed resistance to two antimicrobials; amoxicillin-clavulanic acid and streptomycin. However, they all showed sensitivity to most antimicrobials. Half of Shigella isolates showed resistance to two antimicrobials; chloramphenicol and trimethoprim-sulfamethoxazole where as the other half showed resistant toother four antimicrobials; amoxicillin-clavulanic acid, ampicillin, streptomycin and tetracycline. One-third of enterohaemorrhagic Escherichia coli (EHEC) O157:H7 strains of the isolates were found to be resistant to two antimicrobials; amoxicillin-clavulanic acid and tetracycline. Enteric bacterial infection had a significant association with poor training in food handling and preparation (p=0.034), not knowledgeable about food borne infection (p<0.001) and inconsistent hand washing (p=0.033). Conclusion: Most of the isolates were resistant to ampicillin, streptomycin and tetracycline while all were sensitive to ciprofloxacin and nalidixic acid. Health education along with continuous food safety training should be given to food handlers so that they can adhere with effective hygienic practices.

Enteric bacteria are microbes that reside in the guts of animals and humans. The human gut is therefore the natural habitat for various bacteria species and majority of them participate in metabolic activities that salvage energy and absorbable nutrients protecting the colonized host against invasion by alien microbes and important atrophic effects on intestinal epithelia and on immune structure and function. Thus, they play an essential role in the development and homeostasis of the immune system [1].

Enteric bacterial pathogens, the major causes of food borne gastroenteritis in humans, remain important health problems worldwide. Such infections associated with food contamination are the major public health problems especially in developing countries resulting in morbidity, mortality and socioeconomic impacts such as high rates of hospitalizations and high treatment costs [2]. Currently, one of the major reasons for morbidity as well as mortality associated with gastrointestinal infections is the increasing resistance of the organisms for available antimicrobial agent [2], [3]-[4].

Food handlers who harbor enteric bacteria asymptomatically and who are not adhered with good hygienic practices and inadequate knowledge on food safety are likely to contaminate the food with enteric bacterial pathogens and could also be the source of food borne infections [4]. However, the consequences of food contamination vary among countries and regions of the world depending on climate, geography and degree of social and economic development [4], [5], [6] - [7].

Since food handlers are engaged in food preparation, transport and provision, they are implicated for the transmission of enteric bacterial pathogens to the community if appropriate hygienic practices are not habituated [7], [8] – [9].

Indeed a prerequisite for the prevention and control of diseases due to enteric bacterial pathogens is a clear understanding of their epidemiology. Therefore, an effective means of prevention of their transmission from food handler to consumers is strict adherence to good personal hygiene and hygienic food handling practices.However, for instance, hand washing, being a simple and effective way to cut down cross-contamination, yet often forgotten [5], [10].

People commonly experience dinning out in food establishments such as Hotels, Restaurants and Cafeterias. These establishments prepare and provide various food items to many people implying a possible risk of infection if sanitary and hygienic conditions are not strictly followed [7], [9]. Although certain studies were conducted in some parts of Ethiopia, holistic information regarding enteric bacterial infections and risk factors among food handlers in many parts of the country including the study area is limited. Moreover, emergence or rise in drug resistant enteric bacterial pathogens is a major public health concern needed to be addressed recently. Hence, this study is aimed at determining the prevalence and antimicrobial sensitivity patterns of enteric bacterial pathogens isolated from food handlers found in Jimma town, southwest Ethiopia.

The study was conducted in Jimma town which is located 350 kms south west of Addis Ababa (the capital city of Ethiopia). It is located at an average altitude of 1780 meters above sea level with geographical coordinates of approximately 7°41’ N latitude and 36° 50’E longitude. It lies in the climatic zone locally known as ‘Woyna Dega’ (areas located between 1,500 - 2,400 m above sea level) which is considered ideal for agriculture as well as human settlement. The town is generally characterized by warm climate with mean annual maximum temperature of 30°C and mean annual minimum temperature of 14°C. The annual rainfall ranges from 1138 to 1690 mm. According to the central statistical agency (CSA) of 2007, the total population of the town is 130,254. The town has various food establishments such as Hotels, Restaurants and Cafeterias which serve for the people of the town as well as the visitors.

Cross-sectional study was conducted from July 16/2012 to November 23/2012 among food handlers working at food establishments found in Jimma town. Sample size was determined using single population proportion formula n= Z2 p (1-p) / d2, with the following assumptions: prevalence (p) of 17% from a previous study in Nigeria [11], 95% confidence level, 5% margin of error, and 10% for anticipated non-response rate. Accordingly, the minimum sample size (n) was found to be 239. The total sample size was allocated proportionally to 102 Hotels, 94 Restaurants and 86 Cafeterias. Accordingly, 86, 80 and 73 participants were planned to be included from each selected food establishment in the study. But, 78, 72, and 68 participants were included giving a total of 218 participants (91.2% response rate). Lottery method random sampling procedure was used to recruit study participants.

Data on demographic profile of the participants’ and factors predisposing to enteric bacterial pathogens was gathered using pretested questionnaire. The questions included information on sex, age, educational status, and hand washing practice are among the others.

Stool samples were collected using clean, dry and leak proof stool cups. The specimens were then immediately placed in to Cary-Blair transport medium.The samples were then transported to Jimma University Medical Microbiology Laboratory in ice packed box for bacterial culture and identification.

2.4. Sample Processing and Identification of Bacteria 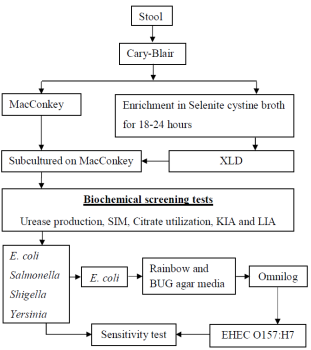 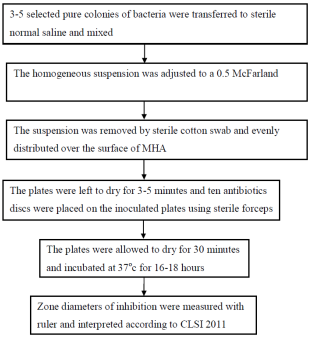 Data were coded, checked for completeness and cleaned for any inconsistencies. The data were then entered and analyzed using SPSS version 16.0. Descriptive statistics were used and 5% level of precision was used for checking the association between dependent and independent variables.

Approval was secured from the Ethical Clearance Committee of Jimma University. Formal letter was also written from the Municipality of the town to food establishments and informed consent was obtained from each study participant. Individuals who were found positive for the detected organisms were treated by the effective antibiotics.

A total of 218 food handlers were participated in this study and their socio-demographic characteristics were presented below (Table1). 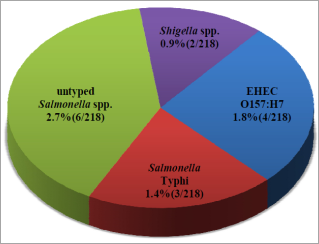 Ten antimicrobial discs were used for sensitivity tests of the isolated enteric bacterial pathogens following standard procedures. Accordingly, the isolates showed varied sensitivities to the tested antimicrobials and the results were interpreted and presented in tables for each of them as; resistant (R), intermediate (I) and sensitive (S) according to the CLSI 2011 guideline.

As presented on the table 3 half (50%) of Shigella isolates showed resistance to six antimicrobials; Amoxycillin-Clavulanic acid, Ampicillin, Chloramphenicol, Trimethoprim-Sulfamethoxazole, Streptomycin, and Tetracycline. However, 100% of the isolates were found to be sensitive to the remaining four antimicrobials; Ceftriaxone, Gentamicin, Ciprofloxacin, and Nalidixic Acid.

Regarding enterohaemorrhagic Escherichia coli (EHEC) O157:H7 strains, three (75%) of the isolates were resistant to two antimicrobials; amoxicillin-clavulanic acid and tetracycline. Two (50%) of the strains showed sensitivity to four antimicrobials; ampicillin, ceftriaxone, chloramphenicol and trimethoprim-sulfamethoxazole. Three (75%) of the strains showed sensitivity to gentamicin and streptomycin. But, all the four (100%) strains were sensitive to two antimicrobials; ciprofloxacin and nalidixic acid.

Based on chi-square statistical test there was a significant association between enteric bacterial infection and not getting training in food handling and preparation (p=0.034), not knowledgeable about food borne infection (p<0.001) and inconsistent hand washing practice (p=0.033) (Table 5).

During the five month study period, 218 asymptomatic food handlers were enrolled from selected food establishments.A total of 15 (6.9%) enteric bacterial pathogens were isolated and their antimicrobial sensitivity patterns were determined. In addition, associated factors for enteric bacterial infection among food handlers were assed and all the results were compared with the findings of other studies.

As far as antimicrobial sensitivity patterns of enteric bacterial pathogens is concerned; generally, the isolates showed varied sensitivities to ten tested antimicrobials. Hence, there was variation in drug sensitivity patterns among S. typhi isolates compared to other studies done somewhere else. For instance, study done in Bahir Dar found that only one (16.7%) S. typhi isolate showed resistance to six antimicrobials; ampicillin, trimethoprim-sulfamethoxazole, tetracycline, chloramphenicol, gentamicin and norfloxacin [8]. However, in the current study, 33.3% S. typhi showed resistance to three antimicrobials; amoxicillin-clavulanic acid, ampicillin and streptomycin. On the other hand, study conducted in India reported that 78.4% S. typhi showed resistance to three antimicrobials; ampicillin, chloramphenicol and trimethoprim-sulfamethoxazole which are conventionally used to treat typhoid fever. Least resistance to norfloxacin, ciprofloxacin, gentamicin and nalidixic acid was observed by most isolates, as reported in the above study. However, multidrug resistance in this study showed by 33.3% of the isolates differs from the above study where 83.3% of the isolates were found to be multidrug resistant [14]. The variation might be due to sample size difference.

Inconsistent hand washing practice was the other significant associated factor. However, 96.8% of the food handlers participated in this study always washes their hands before handling food.This finding is in agreement with those reported from Bahir Dar town (90.6%) and Gondar University (94%) [5], [8]. Differently, this finding is higher than that found from Nigeria where 72.3% food handlers wash their hands before preparing food [11]. The reason for the difference in hand washing might be due to variation in hygienic practices that people adhere with from country to country as well as from region to region depending on social and economic development.

5. Limitations of the Study

This study was limited to certain enteric bacterial pathogens and other medically important enteric organisms such as Campylobacter and Yersinia enterocolitica were left unidentified due to some constraints. Confirmation of some strains of pathogenic Escherchia coli was also left in this study due to scarcity of Omnilog Microplates. Finger nail samples which might indicate the status of contamination with enteric bacterial pathogens were also not considered in this study.