Abstract: Background: Hepatitis B virus infection is a serious blood borne disease. The objective was to determine the knowledge, attitude and practice of heath care workers regarding transmission and prevention of hepatitis B virus infection. Method: A cross‐sectional, hospital- based study carried out in White Nile State, Sudan. Three hundred eighty five health care workers were selected randomly from thirteen hospitals. Structured questionnaire was used for the interview. Knowledge was tested by 16 variables related to mode of transmission and prevention. Cronbach’s Alpha of 16 variables was 0.8. Quartile range was used to identify cutoff points for knowledge levels. Knowledge levels were determined as adequate, moderate and poor. Chi-Square test was used to test the knowledge against workers` characteristics. Result: Education of the workers was significantly associated with knowledge of health care workers about HBV transmission and prevention. Age, sex and marital status were not associated with the level of knowledge. Laboratory technicians and labors have poor knowledge compared to doctors, pharmacist, nurses, midwives and theater operators. More than 80% of health care workers were aware about the availability of protective measures in hospitals. They were significantly practicing sterilizing instruments, wearing gloves and screened the donated blood. The attitude of health care workers after suspicious of being infected had shown that 220 do nothing, 99 consider cautery and 57 believe in voluntary testing. Conclusion: Educated health care workers have adequate knowledge about HBV transmission and prevention and labors were having poor knowledge. Health care workers that aware of available protective measures were sterilizing instruments, wearing gloves and screening the donated blood. The majority of HCWs do nothing after suspicious of HBV infection. Health awareness about hepatitis B virus is needed to target labors, laboratory technicians and other para-medical staff.

Hepatitis B virus (HBV) infection is a serious blood borne disease (BBD) with global health concern. Blood borne diseases are of public health problem concern; mainly in the developing countries. Almost 240 million people, worldwide, are infected with Hepatitis B virus [1]. Approximately 780000 individual died annually from liver cirrhosis and cancer as a result of HBV infection [1]. Health care workers are at high risk to have HBV infection precipitated by injuries from sharp hospital instruments [1]. HBV has different modes of transmission through blood or other body fluids; the most important one is vertical transmission [1]. In endemic regions; early childhood infection is noticed. HBV has long incubation period ranges from 45 to 180 days, on average it is 60-90 days [2,3]. Lack of knowledge could lead to low adherence to safety measures among healthcare workers in low and middle income regions that aggravate the situation [3,4]. It was observed that the knowledge of health care workers is not adequate to prevent themselves from BBDs. In Sudan; the rate of hepatitis B virus infection among Sudanese healthcare workers is high where the majority of health workers in Elsha’ab Hospital, Khartoum State were not vaccinated [5].The knowledge, attitude, and practice of HCWs about HBV infection in central Sudan were poor [6].

Sudan had high HBV sero-prevalence where exposed population ranged from 47% to 78% [7]. The prevalence of Hepatitis B surface antigen was 6.8% and 26% in central Sudan and South Sudan respectively [7]. White Nile state shares the geographical borders with South Sudan and it was observed the influx of Southern population to the state post referendum of South Sudan.

This study was aiming to determine the level of knowledge, attitude and practice of heath care workers regarding transmission and prevention of hepatitis B virus infection in Public Hospitals in White Nile State, Sudan; 2013.

This was a cross‐sectional, hospital- based study carried in White Nile State, Sudan. It is one of 18 States in Sudan. According to 2006 census, its area is about 30,411 km2 and the population is 1,188,707. The State is divided into eight localities; with 23 hospitals distributed across the State. The study population was health care workers (HCWs) registered in the 23 hospitals. The total number of HCWs was 1808.The HCWs included in the study were those with minimum 45 days working period in the hospitals to ensure the adequate contact with the hospital environment (average incubation period for HBV).

Data was processed using statistical package for social sciences (SPSS), version 16. Knowledge was tested by 16 variables related to mode of transmission and prevention. Each variable was given 1 for yes and zero for no. The reliability of the questionnaire was tested by Cronbach's Alpha at acceptable level > 0.7.The Cronbach’s Alpha of the 16 variable was 0.8. Quartile range was used to identify the cutoff points for knowledge levels. The scores of knowledge above 75% (=>12) was nominated as adequate knowledge, the scores between the inter-quartile, 50%-75% (12-10) was nominated as moderate knowledge, and the scores below 50% (=< 10) was nominated as poor knowledge

Testing factors related to knowledge was carried by Chi-Square test at 95% confidence level and P-value less than 0.05 was considered as significant.

Ethical clearance was obtained from the Ethical Committee of Sudan Medical Specialization Board and White Nile State Ministry of Health. Respondents were informed about the study and signed written consents.

Table 1. The level of knowledge about HBV transmission and prevention by characteristics of health care workers in Hospitals - White Nile State, Sudan 2013 (n = 385).

The knowledge about HBV among types of doctors was shown to have insignificant variation. However; it showed a decrease trend as the doctors` job increases, house officers were having the highest adequate knowledge and the least were the consultants [Fig 1]. 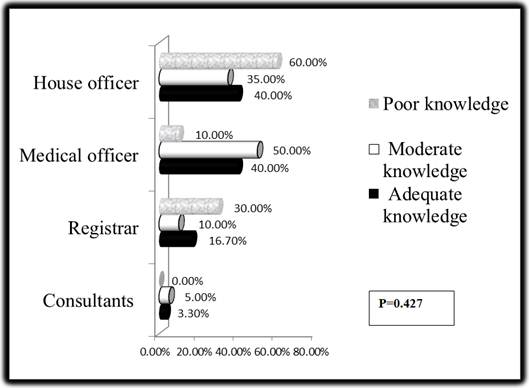 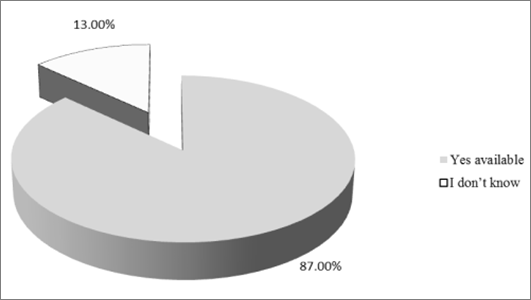 Fig. 2. Awareness of health care workers about the availability of protective measures for prevention of HBV infection in the hospitals- White Nile State, Sudan 2013 (n=385).

It was shown that 87.0 % of the health care workers were aware about the availability of protective measures for HBV in the hospitals [Fig 2].

More than 80% of them were sterilizing the surgical instruments (87.8%), wearing gloves whenever there is contact with blood (92.8%) and 88.1% were screening the blood for donation [Table 3].

Table 3. Awareness of HCWs about availability of protective measures against HBV and practice in the hospitals - White Nile State, Sudan 2013 (n=335).

The attitude of the HCWs towards HBV infection varies, 99HCWs consider cautery, 57 persuade for voluntary blood testing, 9 advice for both and 220 had nothingto do [Fig 3]. 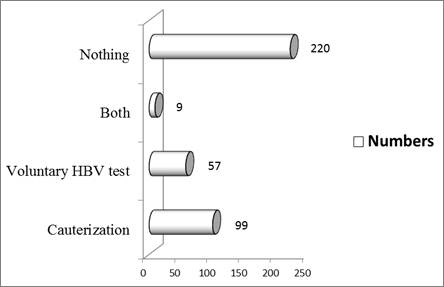 In this study, it was found that age, sex and marital status were not associated with knowledge of health care workers in public hospitals in White Nile State. Unlike a study in Karachi, Pakistan, the knowledge variables about hepatitis viruses were significantly associated with sex and age [8]. Our study used different analysis approach to determine the levels of knowledge compared to the study in Pakistan that used to test the significance differences for each question in knowledge. The level of basic education of health workers in White Nile hospitals was significantly associated with the knowledge about HBV transmission and prevention. A study in some selected hospitals of Dhaka city, Bangladesh showed insignificant association of knowledge with education [3]. The difference is that in this study there was a variation of education levels among the study population compared to the study in Bangladesh where the study population purposively selected nurses that has relevant qualifications. However; education processes itself whether basic or in service are necessary for determination of the knowledge and attitude of health care workers about BBDs transmission and prevention [9].

In this study, laboratory technicians and labors have poor knowledge about HBV transmission and prevention compared to doctors, pharmacist, nurses, midwives and theater operators that had adequate knowledge. This is supported by a study among health care workers in North east Nigeria where midwives and nurses had the highest scores of good knowledge about standard precautions against BBDs [10]. A study in Najran region in Saudi Arabia showed that all health care workers were having the adequate knowledge about hepatitis B virus infection [11]. In a study in a tertiary care hospital in Pakistan, the nurses, operation theatres assistants and resident doctors were more knowledgeable about hepatitis B vaccination than other care providers [12].

The working duration of HCWs in the White Nile hospitals was insignificantly associated with level of knowledge about HBV transmission and prevention. In the Nigerian study, the good knowledge of health care providers about BBDs precautions had shown the highest frequency among those with working duration more than 5 years [10]. The difference between this study and the Nigerian one might be due to the poor in service training for health workers in the White Nile hospitals. It could also be to the brain drain of the trained health staff that search for better financial support outside the State.

More than 90% of health care workers in White Nile State were aware about the availability of protective measure in the hospitals. They were significantly practicing sterilizing the instruments, wearing gloves and screening of donated blood. This is supported by study in Indonesian teaching hospitals that showed positive association between knowledge, attitude and perceived adherence to precautions [4]. More than 60% (206) of the HCWs in White Nile hospitals do nothing for suspicious of being infected with HBV, 24.4% (83) consider cautery and 15% (51) believe in voluntary testing after suspicious. Population in developing countries had poor attitude towards HBV treatment and prevention and they relying on traditional customs and local remedies [13].

The knowledge of HCWs with high levels of education about HBV was significantly adequate. Laboratory technicians and labors were having poor knowledge. Almost all HCWs were aware about the availability of protective measures in the hospitals and practicing sterilizing instruments, wearing gloves and screening donated blood. The majority of HCWs do nothing after suspicious of HBV infection. Intensive health awareness and education program about hepatitis B virus is needed to target labors, laboratory technicians and other para-medical staff in the hospitals.