Impact of Economic Condition on Obesity

Abstract: Prevalence of obesity has increased with alarming rate in the last two or three decades worldwide. The prevalence statistics shows that obesity pandemic is all-pervading even in the developing nations like India. In the present study an attempt has been made to report the prevalence of obesity on the basis of body mass index among school girls of Punjab, total 6000 students were selected with stratified random sampling technique, ranging in age from 10-17 years. The data was obtained from various government and private schools of Punjab based on economic status (1009 from high economic status, 2228 from middle economic status & 2763 from low economic status group). Height of each individual is measured with anthropometric rode and the body mass index (BMI) was calculated by the bio electrical impedance machine with scale HBF-361. Further analysis of variance (Anova) and Scheffe’s post hoc test was employed for testing the hypothesis; the level of significance was set at 0.05 levels. The results show that overweight & obesity was more prevalent among those girls who are associated from high economic status families & vice versa.

Childhood obesity is one of the most serious public health challenges of the 21st century. The problem is global and is steadily affecting many low- and moderate-income countries, particularly in urban settings. The prevalence has increased at an alarming rate. Globally in 2010 the number of overweight children under the age of five is estimated to be over 42 million. Close to 35 million of these are living in developing countries. Overweight and obesity are the fifth leading risk for global deaths. (Keerthan et. al, 2011). Childhood obesity is highly prevalent in the United States (CDC, 2010). Data from the 2007–08 National Health and Nutrition Examination Survey indicate that 17 percent of U.S. children and adolescents (ages 2–19 years) were obese, and approximately 30 percent were either overweight or obese (Ogden et. al., 2008). It is now well recognised that the prevalence of overweight and/or obese children and adults is increasing around the world (AIHW, et. al. 2003, Booth et. al. 2003, Magarey et. al. 2001, Wang and Lobstein 2006, WHO, 2000).

According to a survey, India is the third most obese country in the world. The prevalence of Obesity in Punjab is the highest at 33 percent. In India, 2.5 million people are obese. (Chowbey, 2016). Punjabis are the most obese people in the country, Health Minister J P Nadda told the Rajya Sabha today, while men from Tripura and women from Meghalaya are the thinnest. Men and women from Punjab followed by Kerala and Delhi are the most obese people with 22.2, 17.8 and 16.8 percent of men and 29.9, 28.1 and 26.4 per cent of women from particular states reporting a BMI of more than 25 (Naddu, 2016). More than 40 percent of the population in Punjab is overweight or obese. According to the study, two-fifths of Punjab is overweight and obese. "41 percent of defendants were overweight and obese in the survey," said Dr Thakur. (Thakur, 2015).

The investigation was carried out by Thakur and Kapoor (2016) The outcomes showed that over 63 percent of the population is overweight or obese. Similarly, more than 40 percent of the adult population in Punjab is overweight and obese while 40 percent of the population is suffering from high blood pressure. (Lissner et. al., 2016) Excess risk of childhood overweight and obesity occurring in socioeconomically disadvantaged families has been demonstrated in numerous studies from high-income regions, including Europe. It is well known that socioeconomic characteristics such as parental education, income and occupation are etiologically relevant to childhood obesity. (Stockmarr et. al., 2016) Previous studies have shown that mean BMI and prevalence’s of overweight/obesity and obesity have increased over the last decades in the Nordic countries, despite highly regulated societies with a focus on obesity prevention. (Bhattacharya et. al., 2016) Prevalence of overweight and obesity were 13.3 percent and 1.7 Percent, respectively, using the WHO criteria and 6.7 percent and 10 percent, respectively, using Agarwal BMI growth chart. (Nkwoka et. al., 2014) the prevalence of obesity was found to be 12 percent while the prevalence of obesity and overweight combined was 47 percent. The respondents who had Knowledge of own weights were 67 percent and those who had no knowledge of their weights were 33 percent. Respondents who wanted a better shape than they were 82.4 percent and those who did not mind their shape were 16.5 percent. The respondents who perceived Obesity as a sign of good living were 12.5 percent; as a result of laziness 9.7 percent; as God-given 9.7 percent; as a disease 68.1 percent. (Mushtaq et. al., 2011) Children living in the urban area with high socioeconomic status were significantly at risk for being overweight and obese as compared to children living in the urban area with lower socioeconomic status and rural children. (Khader et al., 2008) the daily pocket money was associated with overweight, while family monthly income was fond to be associated with obesity. The study results could be explained by the fact that mothers with higher education mostly will have a job leaving their children for longer times enabling them to take several unhealthy snacks. It is important to note that children could gain more weight after purchasing several unhealthy snacks that are available in school’s canteens and groceries.

Aim of the present study is to determine the prevalence of obesity in Punjab school girls by using API Growth chart standard. For this purpose total 6000 girl students were selected randomly as a sample and the age rages from 10-17 years (1009 from high economic status, 2228 from middle economic status & 2763 from low economic status groups). The data was obtained from various government and private schools of Punjab based on parents economic status.

Each subject was made to stand bare foot on bio electrical impedance machine with scale HBF-361. The subject’s height, age, and gender were manually saved in the machine. System automatically calculates the actual values of Body Mass Index and displayed the same machine. If the test performed systematically then it was saved otherwise test was repeated again.

SPSS was utilized for interpretation of the data. The results were analyzed statistically by applying one way Anova. For further examination post-Hoc test (Scheffe’s test) was used. In all the examinations, the 5 Percent critical (p<0.05) was used to indicate statistical significance.

Different types of descriptive statistic such as mean and standard deviation was computed to describe each variable statistically. The level of significance was set at .05. Its results have been depicted in the following tables.

It can be seen from table- 1that significant difference were found with respect to body mass index for economic status of parents of the school girls because P-value (sig) .000 was lesser than 0.05 level of significance (P<0.05). Since the acquired F-ratio 3924.00* was found significant, so, Scheffe’s post hoc test was utilized to access the direction and significance of difference between means among high, middle and low economic status of the parents. The results of Scheffe’s post hoc test have been displayed in table-2.

*The mean difference is significant at the 0.05 level.

From table- 2 the following conclusions were drawn:

So the above results indicates the lower the economic status more the chances of overweight & obesity & vice versa. 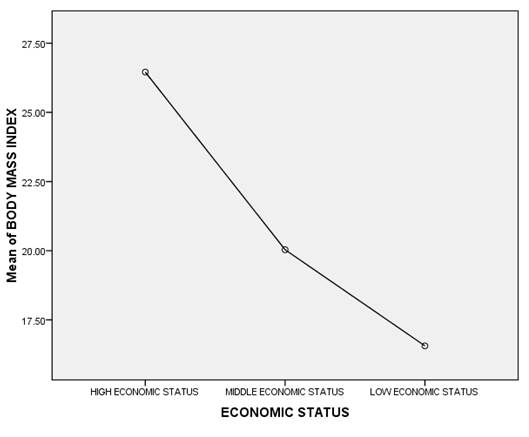 It has been noticed from the results of the body mass index that over weight and obesity is more dominant among those girls who are associated to higher economic status families, as per their counterparts because of urbanization and industrialization, their random diets are not balanced, a sedentary life style that gives prominence to only digital activities rather than physical activities, consumption of empty calories in colas and having fattening, preservative laden junk food, are some of the common lifestyle traits that lead to unwanted weight gain. Whereas middle and low economic status parents girls under weight & healthy weight is more prevailing than their equivalents. Vaida (2013) undertook a study on "Prevalence of obesity Among children studying in government and private schools in district Anantnag age group (6-12 Years)" the high economic group were found to be more obese because of their decreased physical activity, increased levels of calories intake and sedentary life style. Zhai et. al. (2013) reported the positive correlation between socio economic status (SES) and overweight & obesity among school children. He found this the prevalence of overweight and obesity rises with families SES level. The current findings are in line with study of Jain et. al. (2012) also confirmed the remarkable effect on prevalence on overweight and obesity among low to high SES group. Cherian et. al. (2012) also strengthened that prevalence of overweight and obesity was found higher in the high income group and girls. Goyal et. al. (2010) and Humayun & Shah (2010) also revealed that the prevalence of overweight among children was higher in moderate SES as compared to high SES group in both boys and girls whereas the prevalence of obesity was higher in high SES group as compared to moderate SES group. Tharkar & Viswanathan (2009) also supported to these findings. In line with the findings of Warraich et. al. (2009) higher SES group should be targeted for overweight while underweight is a problem of lower SES which is also supported to these findings. Laxmaiah et. al. (2007) and Marwaha et. al. (2006) also advocated to these findings. Socio economic status was found to be directly correlated with BMI in a study conducted by Kaur (2008) in Delhi, India.