An Unusual Source of Systemic Thromboembolism

Abstract: Pulmonary vein thrombosis (PVT) is a rare but potentially life threatening condition. This is a case of pulmonary vein thrombosis presenting with systemic thromboembolism despite treatment with anticoagulation. A 73-year-old woman, with past medical history of hypertension, peripheral arterial disease (PAD), and treated endometrial and breast cancer, presented with complaint of pain in her right foot of one-day-duration. She had a history of PVT diagnosed on chest CT angiogram one month prior to presentation, which was done to exclude pulmonary embolism when she presented with progressively worsening dyspnea. Physical examination was notable for an elderly woman in painful distress, with a cold, pulseless right foot with bluish discoloration of the skin of the forefoot and a clear line of demarcation from the proximal foot. The angiogram revealed occlusion of the right popliteal artery just above the knee with no appreciable blood flow within the distal vessels. Contrast CT of the abdomen and pelvis revealed multiple hypo-enhancing ill-defined hepatic masses, bilateral adrenal masses and mediastinal adenopathy. Echocardiogram revealed a large left ventricular thrombus and hyper-dynamic left ventricular systolic function. She was admitted for acute right foot ischemia and underwent popliteal exploration, open thrombectomy and embolectomy with restoration of pedal flow. However, she had repeat right popliteal exploration two days later due to further ischemic changes in the foot. Post-operatively, she developed multi-organ dysfunction including respiratory failure requiring endotracheal intubation and mechanical ventilation. She was terminally weaned from mechanical ventilation on request by her family and she died on the sixth day of admission. This case describes the occurrence of systemic embolization despite anticoagulation for pulmonary vein thrombosis. The large thrombus found in the left ventricle most likely represents a thrombus in transit from the superior left pulmonary vein en-route systemic embolization with consequent multi-organ dysfunction.

Pulmonary vein thrombosis (PVT) is a rare but potentially life threatening condition 1. Few cases have been reported describing the occurrence of PVT in patients undergoing surgeries such as lung transplantation or lobectomy; and in patients with sclerosing mediastinitis, primary or secondary tumors of the lung and atrial myxoma 2-7. PVT can present either acutely as pulmonary infarction with cough, dyspnea and pleuritic chest pain or in a more insidious manner as progressive or recurrent pulmonary edema and pulmonary fibrosis 1, 2. Prompt diagnosis of PVT is desirable to prevent or limit systemic thromboembolization7. However, because of its non-specific signs and symptoms, PVT is difficult to diagnose clinically. This report is a case of pulmonary vein thrombosis presenting with systemic thromboembolism despite treatment with anticoagulation.

A 73-year-old woman, ex-smoker with 40 pack-years of smoking presented with complaint of pain in her right foot of one-day-duration. She has past medical history of hypertension, peripheral arterial disease (PAD), endometrial cancer diagnosed fifteen years ago, treated with hysterectomy and radiotherapy; and invasive ductal carcinoma of the left breast diagnosed ten years ago and treated with lumpectomy, radiation and chemotherapy. The patient had earlier presented one month ago with progressively worsening dyspnea and abdominal pain, two weeks after a one-month hospitalization at another hospital for dyspnea, where she had thoracocentesis and chest tube placement for pleural effusion, in addition to liver biopsy and left femoral-femoral bypass. She was found to have acute pancreatitis and pulmonary vein thrombosis on chest CT angiogram, which was done to exclude pulmonary embolism. She was started on subcutaneous enoxaparin 80mg every twelve hours and was managed conservatively for acute pancreatitis. The patient was discharged on the same dose of enoxaparin, which she reported good compliance with. She was otherwise in her usual state of health until she developed the right foot pain at rest, with no swelling or prior history of trauma or gout. She became concerned when the pain was not remitting with acetaminophen and she noted that the foot was becoming cold and dusky in color. Hence, she presented to the emergency room. 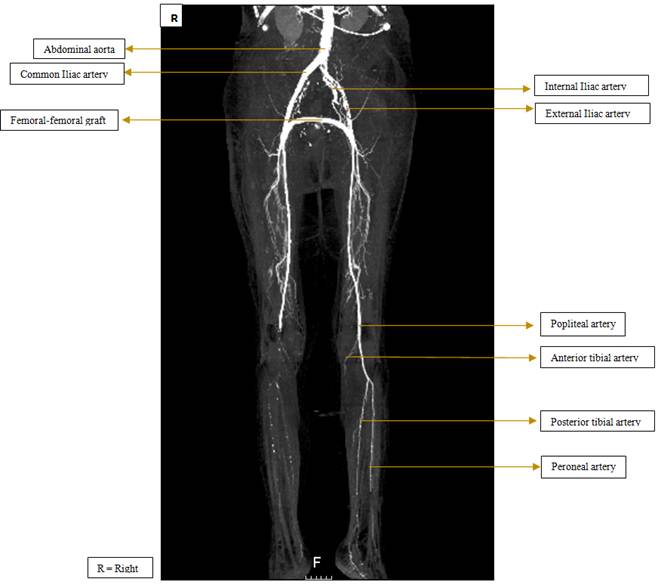 Figure 1. CT angiogram of the arterial system of the lower extremities revealing occlusion of the right popliteal artery just above the knee.

Vital signs on presentation were blood pressure of 121/99mmHg, pulse 121/minute, respiratory rate 24/minute, and temperature 97.5˚F with oxygen saturation 100%. Physical examination was notable for an elderly woman in painful distress, with dry mucous membranes and mild pallor, without icterus, central cyanosis or evidence of respiratory distress. She had normal first and second heart sounds and decreased breath sounds in the left lower lung zone. The right foot was cold, pulseless and it had a bluish discoloration of the skin extending distally from the metatarso-phalangeal joints, with a clear line of demarcation from the proximal foot, which was warm and had normal skin color. Complete blood count revealed white blood cell count of 11,200 per microliter, hemoglobin of 9.2mg/dL and a platelet count of 119,000 per microliter. Renal function was normal on admission, with serum creatinine of 1.0mg/dL.

Bilateral venous doppler ultrasound of the lower extremities was negative for deep vein thrombosis down to the level of the right and left popliteal veins. She had a CT angiogram which revealed occlusion of the right popliteal artery just above the knee with no appreciable flow within the right anterior tibial, peroneal and posterior tibial arteries. The CT angiogram also revealed patent femoral-femoral bypass and occlusion of the right internal iliac artery, left common iliac artery, left proximal internal and left external iliac arteries (Figure 1). Her chest X-ray revealed multiple pleural-based masses and nodules in the left hemithorax and a moderate-sized left pleural effusion (Figure 2). Chest CT with contrast revealed no filling defects within the main, lobar, or segmental pulmonary arteries to suggest a pulmonary arterial embolism. However, there was a filling defect within the superior left pulmonary vein consistent with a venous thrombus. Other findings on the chest CT include bulky mediastinal and left hilar adenopathy, multiple pleural nodules, and left thyroid mass, without pulmonary consolidation, pleural effusion, or pneumothorax (Figure 3). Contrast CT of the abdomen and pelvis revealed multiple hypoenhancing ill-defined hepatic masses, bilateral adrenal masses, mediastinal adenopathy, left anterior abdominal wall nodule and mild fusiform dilatation of infra-renal aorta up to 2.6 cm with thrombosis of the left common iliac, proximal internal iliac, and external iliac arteries (Figure 4). Echocardiogram revealed a large left ventricular mass consistent with thrombus and a left ventricular ejection fraction of 80% (Figure 5).

She was admitted for acute right foot ischemia and underwent popliteal exploration, open thrombectomy and embolectomy with restoration of pedal flow. However, she had further ischemic changes to her right foot; hence she was taken back to surgery two days later for right popliteal exploration, intraoperative angiography, and selective injection of tissue plasminogen activator into the right anterior and posterior tibial arteries.

Figure 5. 2D Echocardiogram revealing a large (3.23 x0.98cm) mass in the left ventricular cavity in close apposition to the interventricular septum, consistent with thrombus.

Post-operatively she developed multi-organ dysfunction including respiratory failure requiring endotracheal intubation and mechanical ventilation, acute kidney injury (with 3+hematuria and 2+proteinuria), cerebral dysfunction and shock requiring vasopressors. Her platelet count dropped from 298,000 three weeks prior to presentation to 119,000/micro liter on admission. Because the patient was taking enoxaparin and had a 4T’s score of 5, there was concern for heparin-induced thrombocytopenia, hence anticoagulation was changed from enoxaparin to argatroban.Her poor prognosis was discussed with her family, who asked for comfort care only and withdrawal of mechanical ventilation. The patient had terminal weaning from mechanical ventilation and she died on the sixth day of admission.

Venous thromboembolism (VTE) is a common complication of malignancy. In most cases, thromboembolic events occur in the setting of a clinically evident malignancy 8, 9. Clinically apparent VTE occurs in as many as 10 percent of patients with cancer 10-13. VTE typically presents as deep vein thrombosis (DVT) and/or pulmonary embolism (PE), in adults with cancer; PVT in patients with cancer is rare. PVT is difficult to diagnose clinically because of its non-specific signs and symptoms. A combination of conventional diagnostic modalities such as ventilation-perfusion scanning, pulmonary angiography, bronchoscopy, transthoracic echocardiography (TTE), trans-esophageal echocardiography (TOE), computed tomography (CT) and magnetic resonance imaging (MRI) is often required to make a diagnosis of PVT1-7.

The cause of PVT is unclear. Direct extension of tumor into proximal venules may lead to stasis and thrombosis of the larger distal veins. Iatrogenic or immunologic damage to the vein walls may also promote thrombosis after lung surgery. The pathophysiology of PVT is analogous to that of mitral stenosis 14. A signiﬁcant decrease in the mitral valve area causes an increase in the left atrioventricular gradient and pulmonary venous pressure with compensatory pulmonary arteriolar vasoconstriction. "Leaky capillaries," interstitial edema, and increased uptake by lymphatics through the mechanism of Starling forces occur. Elevated pulmonary artery pressure, right ventricular end-diastolic pressure, and right ventricular dilatation may ultimately result.

Management of patients with recurrent VTE despite anticoagulant therapy is poorly studied. Similar to patients without cancer, patients with symptomatic recurrence are often taking sub-therapeutic doses of their medication. Recurrence in the setting of adequate anticoagulation is more worrisome, indicating drug failure or resistance. Management options include treatment with an alternate agent, escalation of the dose of vitamin K antagonist or low molecular weight heparin (LMWH), or addition of a vena cava filter 16. Options of therapy for recurrent VTE in the setting of adequate anticoagulation include using an alternate agent, and increasing the dose or frequency of administration. Recurrences occurring in patients on warfarin that is in the therapeutic range should generally be switched to LMWH; recurrences on a single daily dose of LMWH can be switched to every 12 hour administration at a therapeutic dose or increased to 120 percent of the therapeutic dose 17.

The development of systemic embolization in our patient who had been on therapeutic anticoagulation with enoxaparin for three weeks prior to presentation; and the greater than 50% decrease in platelet count and a 4T’s pretest clinical score 18 raised suspicion for heparin-induced thrombocytopenia (HIT), hence enoxaparin was discontinued and argatroban was started. The platelet heparin antibody (PF4) was indeterminate, with a value of 0.37. HIT was excluded as a contributing factor to this patient’s presentation by a negative serotonin release assay. The large thrombus found in the left ventricle most likely represents a thrombus in transit from the superior left pulmonary vein and not an in situ intracardiac thrombus, given the normal left ventricular systolic function and absent spontaneous echo contrast in the left ventricle.

This case describes the occurrence of systemic embolization despite anticoagulation for pulmonary vein thrombosis in a patient with a history of treated cancer, presenting with features suggestive of metastases. The large thrombus found in the left ventricle most likely represents a thrombus in transit from the superior left pulmonary vein en-route systemic embolization with consequent multi-organ dysfunction.