Abstract: Background: Glycosylated hemoglobin (HbA1c), fasting plasma glucose (FPG) and 2 hours (2-hr) after breakfast (ABF) plasma glucose, are often used to monitor and manage glycemia in stable diabetic patients. Data regarding the relationship and relative contribution of FPG and 2-hr ABF plasma glucose to HbA1c level in Type 2 diabetes mellitus (T2DM) are insufficient. Objective: To examine the correlation of FPG, and 2-hr ABF with HbA1c in known patients having T2DM; and to find out which one of FPG and ABF is the dominant contributor to overall glycemia in monitoring diabetes. Study Design and Methods: The study was carried on 664 known T2DM patients under treatment and routine follow-up at a tertiary care hospital in Bangladesh. FPG & 2-hr ABF plasma glucose concentrations were measured by hexokinase method. HbA1c was measured by high performance liquid chromatography based hemoglobin assay system. The Pearson correlation coefficient was used to investigate the relationship of FPG and ABF with HbA1c and their significance. Results: Both FPG and ABF levels were correlated with HbA1c but higher correlation was seen between FPG and HbA1c. The correlation coefficients between FPG and HbA1c and between ABF and HbA1c were 0.722 and 0.664 respectively. Both the correlations were found statistically significant (p<0.001). Conclusion: In patients with T2DM, FPG and ABF both were significantly correlated with HbA1c; and in our study we found that overall correlation of HbA1c with FPG was higher than ABF plasma glucose level.

Type 2 diabetes mellitus (T2DM) is a major public health problem. The microvascular and macrovascular complications of DM are well known. T2DM remains the leading cause of end-stage renal failure, cardiovascular disorders, blindness, non-traumatic lower limb amputations, and hospitalizations. According to International Diabetes Federation the global pandemic of T2DM is increasing and it is found same for Bangladesh [1]. An estimated 366 million people worldwide had diabetes in 2011 and this number is projected to reach 552 million in 2030 [1]. Among the top ten, Bangladesh was in the eighth position (8.4 million patients having diabetes) in 2011; and as projected in the report the country will occupy fifth position in 2030 (16.8 million people will have diabetes) [1]. Therefore it has become necessary to diagnose diabetes early and take appropriate measures to maintain good glycemic control; thereby preventing diabetes related complications, morbidity and mortality.

Optimal glycemic control is fundamental to the management of diabetes. FPG and PPG are used to monitor and manage diabetes; Glycosylated hemoglobin (HbA1c) is also widely used in the management of diabetes both as a measure of glycemic control and as a predictor of risk for diabetes complications [5,6]. An initial HbA1c is also recommended to assess the severity of the condition and as a guide of initiating therapy [7]. FPG and PPG level reflect the state of recent glycemia whereas HbA1c level reflects chronic glycemia. HbA1c indicates an average of blood glucose levels over the past 2-3 months [8-10]. Because HbA1c testing is a bit expansive, everybody cannot afford it in Bangladesh. FPG along with the most commonly used index of PPG, as for example plasma glucose 2 hours after breakfast (2-hr ABF), are used for monitoring glycemic status in diabetic patients attending outpatient department of the hospitals of Bangladesh.

This observational study was conducted from July 2013 to December 2013 in the out-patient department of Bangladesh Institute of Health Sciences (BIHS) and Hospital, Dhaka, an enterprise of Bangladesh Diabetic Association. The target population of this study was known adult patients having T2DM and the sample size was 664. It was a cross sectional study and the patients were randomly selected fulfilling the inclusion & exclusion criteria from the patients reporting to the consultants for their follow up and monitoring. The patients were on treatment for diabetes and reporting for review and follow-up.

*Suffering from T2DM under treatment.

*Unwilling to be included in the study.

*Patients having factors that influence HbA1c other than diabetes.

The participants were interviewed face to face and clinical examinations were carried out by the consultants or the health care providers. Samples for FPG, 2-hr ABF and HbA1c were collected from the antecubital vein in the BIHS laboratory accordingly. Analysis for plasma glucose was done by hexokinase enzymatic method using kits manufactured by Siemens Health Care Ltd by Dimension RxL Max automated chemistry analyzer. HbA1c was measured by cation-exchange high-pressure liquid chromatography using D-10™ (BioRad, USA) hemoglobin assay system. The laboratory results along with the relevant clinical findings were endorsed in the semi-structured data collection sheet. All the responses obtained from the patients were coded numerically and analyzed using Statistical Package for Social Science (SPSS) version 16 software. The Pearson correlation coefficient (r) was used to investigate the relationship of FPG and 2-hr ABF with HbA1c. A p value of <0.05 was considered statistically significant.

The background, clinical and glycemic characteristics of the study population is shown in Table 1 and Table 2. The mean age was found to be 53.5 years, male being 44.1% and female 55.9%. HbA1c levels in 8% of subject was ≤6.5% while 51.8% had values >8.5%. The mean values of HbA1c, FPG and 2-hr ABF were 9.0%, 8.5 mmol/L and 12.2 mmol/L respectively. The correlation coefficient of HbA1c (Table 3) with FPG was 0.722 (p<0.001) and with 2-hr ABF was 0.664 (p<0.001). Both correlations were seen positive, moderate and statistically significant. The overall relationship of HbA1c with FPG was found to be more closely correlated as compared to that of HbA1c with ABF (r=0.722 versus 0.664). We found the correlation between FPG and 2-hr ABF to be positive (r =0.773), moderate and highly significant (p<0.001). The scatter plot graphs with regression lines for the correlation of HbA1c with FPG and ABF are shown in Figure 1 and Figure 2. The figures show that there is a definite linear relationship between HbA1c with FPG and that of ABF values and both values of FPG and ABF are positively correlated with HbA1c.

In this study, we correlated HbA1c with FPG as well as with 2-hr ABF in patients with T2DM. Both FPG and ABF levels were found to be positively correlated with HbA1c. But the correlation of HbA1c with FPG was found to be higher (r=0.722) than that with 2-hr ABF plasma glucose (r=0.664). Both FPG and ABF contributed to overall glycemia but contribution by FPG was found to be relatively more than by 2-hr ABF plasma glucose in our study population where 51.8% had HbA1c >8.5%.

Our findings are consistent with the studies of Bonora et al., Saiedullah et al., Hossain et al. and Gupta et al. [11-14]. Bonora et al., in their study on T2DM (n=371) observed that HbA1c has close relation to FPG and not to the PPG level [11]. They concluded that FPG measurements are more closely related to HbA1c than PPG. One study done in Bangladesh by Saiedullah et al. revealed that FPG had a modest higher relation with HbA1c than 2-hr after oral glucose load in the newly diagnosed 347 diabetic subjects [12]. In their study the Pearson's correlation coefficient of FPG and PPG with HbA1c in the diabetic subjects were 0.8012 (p<0.001) and 0.7812 (p<0.001) respectively. They concluded that evaluation of FPG may provide better outcome than PPG in the newly diagnosed never treated diabetic subjects. Hossain et al. also had a similar type of study among 428 newly diagnosed cases of diabetes in Bangladesh [13]. They correlated the FPG and plasma glucose 2-hr after oral glucose load with HbA1c; the Pearson’s correlation coefficient were 0.551 (p<0.001) and 0.475 (p<0.001) respectively. 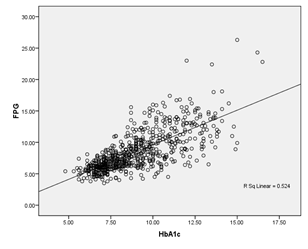 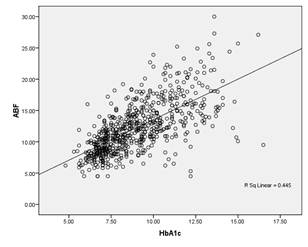 In a study on 50 patients of T2DM in India, done by Gupta et al., HbA1c levels in 20% of patients were <6.5% while 80% had values >6.5% [14]. Both FPG as well as PPG levels (one sample taken 2-hr after meal) were correlated with HbA1c but higher correlation was seen between FPG and HbA1c (r=0.685 versus r=0.623). They concluded that FPG value appreciably contributes HbA1c as compared to post-meal glucose values. Carroll et al. evaluated the relationship of FPG to PPG and concluded that the FPG level predicts the degree of post-meal hyperglycemia and the magnitude of the post-meal excursion from baseline [15]. The authors concluded that, because FPG is a determinant of PPG excursion, "fixing the fasting" should precede PPG correction.

The study of Monnier et al. suggested that FPG levels represent the major contributor to overall hyperglycemia at higher HbA1c levels (>10.2%), while PPG is the dominant contributor in patients with good to moderate glycemic control (HbA1c <8.5%) [20]. In our study the majority of the patients had HbA1c level >8.5%, which may explain the overall closer relationship of HbA1c with FPG than 2-hr ABF. The FPG is more consistent and reproducible than PPG because there are more variables in the latter, such as timing and carbohydrate load [21]. The variables of food intake and exercise are much less of a factor at night preceding measurement of the FPG, and this may enable a more consistent pattern of values for FPG. According to recommendations of American Diabetes Association, pre-prandial glucose is targeted first [22]. Only when pre-prandial glucose is controlled, but HbA1c is not, PPG should be targeted. In present study both FPG and PPG were found significantly correlated with HbA1c. This suggests that correcting both will help to achieve a good glycemic control. The Diabetes Control and Complications trial and Research Group (1993) suggested that one should aim at controlling plasma glucose not only in the fasting state but throughout the day to achieve better long-term glycemic control and minimize the risk of chronic diabetic complications [8].

The study revealed that HbA1c has significant and positive correlations with FPG and 2-hr ABF plasma glucose. HbA1c was found to have higher correlation with FPG than 2-hr ABF plasma glucose level in our study population where majority had a mean HbA1c value of ≥8.5%. Thus correcting both FPG and ABF will help to achieve a good glycemic control in patients with T2DM that can prevent diabetes related complications, morbidity and mortality.

The authors declare no conflict of interest relevant to this article.

The authors received no financial support for the research, authorship, and publication of this article.