Aminaftone in the Treatment of Raynaud’s Phenomenon in Systemic Sclerosis: New Perspectives

Abstract: Objective: The aim of this study was to assess the efficacy (in terms of improved VAS Pain, Raynaud's Phenomenon attacks frequency and Raynaud’s Condition Score) of the Aminaftone in patients with Raynaud’s Phenomenon (RP) secondary to Systemic Sclerosis (SSc). Methods: Open label controlled study. We evaluated the efficacy of Aminaftone in the treatment of secondary RP in 108 patients with SSc consecutively recruited and divided in two groups. Group A: 51 Patients in treatment with Calcium Channel Blockers, prostanoids (iloprost 2ng [min/kg every 4 weeks), Endothelin Receptor Antagonist and Phosphodiesterase-5 inhibitors (Standard of Care). Group B: 57 Patients in treatment with Calcium Channel Blockers, Prostanoids, Endothelin Receptor Antagonist and Phosphodiesterase-5 inhibitors and Aminaftone (Standard of care + Aminaftone). Results: The number of RP attacks in group treated with Aminaftone (Group B) was lower than the group treated with standard therapy (Group A) from baseline to Week 48, obtaining statistically significance (Δ A -1.50 Δ B -2.10 p=0.02 95%CI). The RCS was statistically significantly different (Δ A -1.60 Δ B -2.50 p=0,04 95% CI), as was the pain VAS(Δ A -20.80 Δ B -30.60 p=0.04 95%CI) at week 48. Conclusion: The use of Aminaftone was well tolerated and improved RP as measured by RCS and pain when added to standard of care. A well-designed randomized controlled trial is needed to determine if these preliminary findings are supported.

Systemic Sclerosis (SSc) is a chronic autoimmune inflammatory pathogenic disease of the connective tissue, characterized by progressive fibrosis thickening of skin and internal organs. Widespread vasculopathy is one of the hallmarks of SSc and the first vascular event is Raynaud's phenomenon (RP). This is a paroxisymal vasospastic event triggered by cold or emotional states and characterised, in its classic triphasic expression, by pallor (ischaemic phase), followed by cyanosis (cyanotic phase) and lastly redness (reactive hyperaemia phase). The hands are the most frequently affected site, but feet, ears, nose and tongue may also be involved [1]. In the majority of cases, this is a primitive phenomenon, not associated with any disease. In a small percentage, it precedes and/or accompanies disease of the connective tissue, particularly, SSc. In these cases it is defined as secondary Raynaud's phenomenon [2].

While primary RP is characterised by a vasospastic condition that lead to a reduced reactivity to thermal stimuli and never evolves into trophic damage, the RP secondary to SSc is characterised by an initial vasospastic phase which evolves into intraluminal tissue proliferation, determining a process of tissue ischemia of the arterioles involved [3]. Moreover, RP in SSc patients, often influences the onset of trophic alterations to the fingertips in the form of necrosis, sloughs, ulcers and residual scarring which are subject to infections and, in more severe cases, even amputation; having a deeply negative effect on the quality of life. RP and SSc present a pathophysiological mechanism which is still not completely clear today. According to the so-called "vascular hypothesis," endothelial injury and activation play a central role in the pathogenesis of SSc, and some therapies currently used for SSc are targeted at restoring vascular integrity and homeostasis. Following endothelial damage, local release of cytokines and chemokines activate endothelial cells to upregulate adhesion molecules, such as E-selectin adhesion molecule 1 (ELAM-1), intracellular adhesion molecule 1 (ICAM-1), and vascular cell adhesion molecule 1 (VCAM-1), which may eventually shed or be released into the circulation [4,5]. Several studies have highlighted endothelial damage and alterations in the proliferation of vascular structures, with unbalance of factors regulating vascular dilatation and vascular constriction. A very important role appears to be played by endothelin (ET-1), a molecule present in extremely high plasma concentration in these patients and which has a powerful vascular constrictive action [6]. Traditional treatment of RP in SSc consists of the use of calcium channel blockers and prostanoids [7]. Over recent years, the scientific community has focused on some drugs belonging to the endothelin receptor antagonist category and phosphdisterase-5 inhibitors, which have given excellent results for the treatment of pulmonary hypertension and in the treatment of digital ulcers [8,9,10,11,12]. Another molecule, Aminaftone, compound 2-hydroxy-3-methyl1-1,4-napthohydroquinone-2-p-aminobenzoatate (C18-H15-N-O4) used in the treatment of capillary disorders, has been reported to be effective in reducing vessel permeability and the number and size of leg ulcers in patients with chronic venous insufficiency [12,13, 14]. Results from preliminary and open label studies suggested that the activity of aminaftone may be related to downregulation of ELAM-1 and VCAM-1 expression and to endothelium remodelling induced by down-regulates ET-1[15,16].

The aim of this study was to assess the efficacy (in terms of improved VAS Pain, RP attacks frequency and Raynaud’s Condition Score) of the Aminaftone in patients with Raynaud’s Phenomenon secondary to Systemic Sclerosis.

In our preliminary study, we evaluated the efficacy of Aminaftone in the treatment of secondary RP in 108 patients with SSc according to the American College of Rheumatology Criteria [17] at least two attacks of Raynaud’s Phenomenon, consecutively and divided in two groups matched according to baseline characteristics (age, sex, duration of RP, SSc duration, antibodies, digital ulcers and therapies):

Group B: 57 Patients in treatment with Calcium Channel Blockers, prostanoids, Endothelin Receptor Antagonist and Phosphodiesterase-5 inhibitors and Aminaftone (Standard of care + Aminaftone). Any kind of concomitant medication was allowed, as long as the dose was stable for ≥ 3 months; no patients receiving moderate or high dose corticosteroids (prednisone > 7,5 mg/day or equivalent) and/or flavonoids were excluded from the study.

Patients with glucose-6-phosphate-dehydrogenase deficiency or other clinical conditions contraindicating the use of Aminaftone were excluded from the study.

Patients were categorized as having limited or diffuse cutaneous SSc according to LeRoy et al. [18] Disease onset was determined by patients’ recall of the first non-Raynaud symptom clearly attributable to scleroderma [19].

The use of Aminaftone in this type of patients is according to the indication for which it was registered, the state of capillary fragility. All patients were given a detailed explanation of the study and their informed consent was obtained.

Recruitment of the prospective study was carried out September and October 2013, that means before colder months, in order to place more attention on Raynaud’s phenomenon and monitoring it more objectively, during the coldest period of the year.

The patients of B group took one tablet of Aminaftone 75 mg twice a day. Visits were planned every 30 days (±7) for 12 months and each patient was given a diary to report on every visit, which indicate:

• Date of onset of Raynaud's Phenomenon.

• Raynaud's Condition Score (RCS): Limitation of daily activity on a scale of 1 to 10 (meaning 10 as a total inability to do the activity).

At each visit, a blood sample was taken for routine analysis in clinical practice and a pregnancy test in women with childbearing potential was performed. Blood count, liver aminotransferase values and creatinine, were also evaluated each month to check the tolerance to the drugs. At the same time, several parameters for disease activity were evaluated: at weeks 0 - 24th and 48th all patients undergone tests such as Modified Rodnan Skin Score (MRSS) and HAQ disability index (HAQ-DI) [20].

The statistical analysis was performed using SPSS statistical software (for windows, version 16.0) and MINI-TAB (for windows, version 14.0). The data were expressed by mean showing the 95% Cls. P<0.05 was considered statistically significant. Differences in continuous variables between groups were compared via the U Mann-Whitney test for equality. Contrasts between treatment groups with regard to Raynaud symptoms (pain, tingling, numbness) were made using the Wilcoxon Rank-Sum test.

106 of 108 patients enrolled completed the study. Two of them were lost to follow up. No significant statistical differences were observed between the 2 groups with respect to demographic and clinical characteristics.

Group A: 27 of the 51 patients had the limited form of SSc and 24 of them had a diffuse form. The mid duration of SSc was 8.4 years with 12.8 years of average duration of onset of RP.

There was no significant difference between the symptomatic manifestations of the two groups of patients at baseline [Tab.2].

Table 1. Details of the demographic and clinical characteristics of patients (tot: 108 pts).

Table 2. Mean Changes from the baseline values in Group A and Group B. 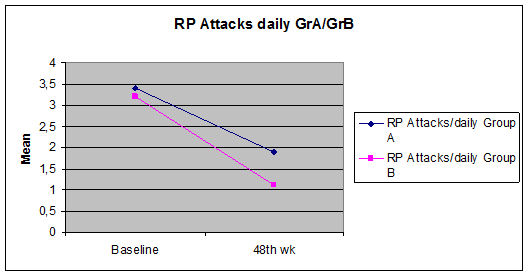 Fig. 1. The mean changes from the baseline of Raynaud’s Phenomenon attack frequency. 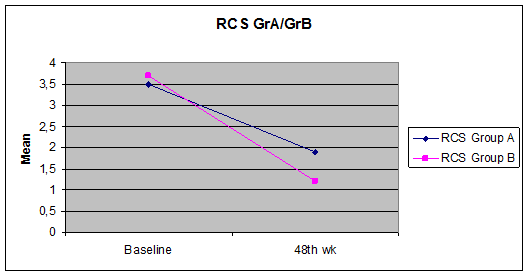 Fig. 2. The mean changes from the baseline of Raynaud’s Condition Score. 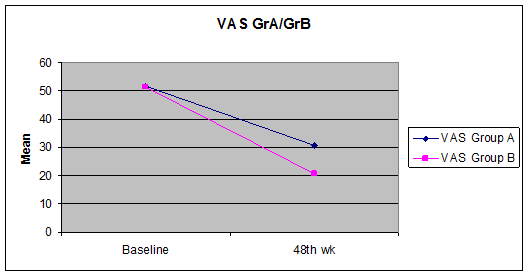 Fig. 3. The mean changes from the baseline of Visual Analogic Scale Pain.

There were no differences in the MRSS (p=0.30) and HAQ-DI (p=0.09) [Tab.2]. There were not serious adverse events during the study, only in two patients there was an increase of liver transaminases (2-fold upper limit of normal), one patient had episodes of low blood pressure and another patient presented peripheral edema, but none of these were in Group B (standard care + Aminaftone).

This is the first open label controlled cohort study with patients treated with Aminaftone in association to standard therapy for secondary Raynaud’s Phenomenon in SSc. Our data showed a statistically significant improvement of baseline in the number of attacks of RP, VAS pain, Tingling, Numbness and RCS. Same results have been highlighted by other studies where endothelin receptor antagonists were used [21,22,23]. Few reports described the successful of Aminaftone but these are studies on a small sample of patients [20], while there are some studies (but non-blinded approach) of bosentan in the treatment of Raynaud’s Phenomenon and digital ulcers in SSc patients [15,25,26,27]. Thus, this preliminary study it’s restricted by its limitations. It is too underpowered to detect small treatment effect. Nevertheless as previously shown by other authors in treatment with ERA and PHE-5 Inhibitors, our data highlighted a statistically significant improvement of RP [12,21,27,28], while another studies failed to document any beneficial effect on VAS, RP or development of digital ulcers [29,30,31]. These phenomena determine patient worsening of the quality of life, not only in terms of pain, but also due to the extreme difficulty in performing normal daily activities. A very interesting phenomenon was that some patients with oral mucositis (6 women) have improved until complete resolution of symptoms during treatment with Aminaftone. This is probably related to the reduction of the edematous phase that this molecule has been shown to has in several studies [13]. Our results have highlighted the possible effectiveness of Aminaftone in association with standard therapy resulting in a synergic effect on vasospastic phenomena, which confirm the fundamental role of endothelin in the pathogenesis of SSc and her different level of pathway, even if the data remain still unclear. Moreover Aminaftone has an effect of down-regulation of many cytokines including for example IL-6, which intervenes in the acute inflammatory phase. Also decreases levels of TGF-β which can lead to pulmonary fibrosis activating fibroblasts to produce excessive collagen deposition.

This study has some limitations. It’s not randomized, not blind and the method of data collection is not accurate (diary completed by the patient).

Aminaftone was well tolerated and improved RP as measured by RCS and pain when added to standard of care. A well-designed randomized controlled trial is needed to determine if these preliminary findings are supported.