Abstract: Diabetic ketoacidosis (DKA) is the commonest hyperglycemic emergency in people with diabetes. Fluid and insulin, commonly via intravenous route, is the mainstay of treatment; however, other methods of insulin administration have been tried. In this study, we aimed at comparing the efficacy and safety of continuous subcutaneous insulin infusion (CSII) to intravenous (IV) insulin infusion protocol using a short acting insulin analogue, glulisine, in patients with mild to moderate DKA. This is a prospective randomized controlled trial including 30 patients with DKA randomly assigned to receive Glulisine insulin via CSII or IV infusion. Metabolic parameters were observed till resolution of DKA. Primary end point was assessment of the duration till resolution. Secondary end points included total length of hospitalization, amount of insulin used and the number of hypoglycemic events. There were no statistical differences in the mean duration of treatment until correction of DKA being 16.58 ± 3.68 hours for CSII group versus 14.60 ± 3.2 hours in the IV group, p=0.136. There was no mortality and no differences in the length of hospital stay, or the number of hypoglycemic events among treatment groups. However, the total amount of insulin administration until resolution of ketoacidosis was significantly higher, 61.50 ± 13.89 units, in CSII group compared to 46.60 ± 13.53 units in the IV group, p=0.009. We concluded that the use of CSII of glulisine insulin represented a safe and effective alternative to the use of IV glulisine in the management of patients with mild to moderate DKA.

Diabetic ketoacidosis (DKA) is the most common hyperglycemic emergency in people with diabetes and the leading cause of death in children with Type 1 Diabetes Mellitus (T1DM). [1-3] One of the important pillars in treatment of DKA is the administration of regular insulin via intravenous (IV) infusion or by frequent subcutaneous (SC) or intramuscular (IM) injections. [4-6] A number of controlled trials in patients with DKA showed that low-dose insulin therapy is effective no matter by which route it was given. [7, 8] Intravenous administration of regular insulin is preferred by most diabetologists because of the delayed onset of action of SC insulin and its prolonged half-life. In their studies, Fisher et al. [9] and Menzel et al. [10] demonstrated that DKA episodes treated with IV regular insulin had experienced a more rapid fall in their plasma glucose and level of blood ketones than those treated with IM or SC insulin. They also showed that more than one third of patients treated with IM or SC insulin did not lower their plasma glucose by 10% in the first hour of insulin therapy. Yet the cost of treating DKA with IV insulin may be higher, because of the need to admission to an intensive care unit which may not be available in many areas. [11]

New analogues of human insulin with a rapid onset of action, aspart, lispro or Glulisine insulin have become available over the last two decades and may represent an alternative to the use of regular insulin in treatment of DKA. Treatment of mild and moderate DKA with hourly injections of SC lispro insulin was shown to be equally effective as the use of the standard IV regular insulin with comparable mean duration of treatment needed to achieve resolution of DKA in both groups.[12] However, treatment with hourly schedule of SC insulin injections may not be feasible in many hospitals because of nursing staff shortage on regular wards. Therefore, we expanded our investigation on the use of insulin analogue by comparing the use of continuous subcutaneous insulin infusion (CSII) by insulin pump using Glulisine and intravenous Glulisine insulin infusion. CSII has the advantage of consistency of basal insulin delivery with easiness of adjusting its rate and the avoidance of high insulin depot that may precipitate a later hypoglycemia. All these factors advocate its clinical superiority. [13]

This is a prospective, randomized controlled trial that included a total of 30 patients with DKA admitted to Alexandria main university hospital. The diagnosis of DKA was established in the emergency department by a plasma glucose level > 250 mg/dl, a serum bicarbonate level <15 mEq/L, arterial pH below 7.30 and capillary beta-hydroxybutyrate > 3.0 mmol/L (measured with the Precision Xtra glucometer/ketone meter, Abbott Laboratories). [14, 15] Patients with coma, hypovolemic shock, acute myocardial ischemia, end-stage renal or hepatic failure, dementia, pregnancy and sever acidosis were excluded. [16]

Both groups started with the same initial dose (0.1 unit /kg/hour) of glulisine insulin until blood glucose reached 250 mg/dl. At that time, insulin dose was reduced to 0.05 units /kg/h. [17] Initial Fluid therapy with isotonic saline was given in a rate depending on the clinical state of the patient; isotonic saline was infused at a rate of 10-15 ml/kg body weight per hour (about 1000 ml/h in an average-sized person) during the first two hours. [17] Potassium chloride (20 to 30 mEq/L) was added to the replacement fluid once the serum potassium concentration fall below 5.3 mEq/L, with an adequate urine output (>50 ml/h); aimed to keep serum K level between 4 and 5 mEq/L. [18] No patients in this study received bicarbonate therapy.

DKA was considered resolved in the presence of the following: [20]

When these levels were achieved, the IV infusion of insulin or CSII was discontinued (one hour after the administration of patient’s preadmission subcutaneous dose of short and intermediate-acting insulin). [21] Close monitoring was done throughout the treatment duration. Blood glucose was measured by a finger stick every hour. Serum HCO3, arterial pH, and serum β-hydroxybutyrate were measured on admission (before the initiation of insulin) and at 2, 4, 8, 12, 16, and 24 hours of treatment. Response to medical therapy was evaluated by improvement of metabolic parameters, assessing the time required for resolution of ketoacidosis, the amount of insulin used, total length of hospitalization and the number of hypoglycemic events during therapy.

The study was performed according to the guidelines of the Helsinki Declaration [22] and approved by the Ethics Committee of the Alexandria Faculty of Medicine. All participants who freely accepted to participate in the study signed a written informed consent.

The study population included 15 patients treated with CSII and 15 patients treated with IV infusion of glulisine insulin. The baseline characteristics of both groups showed no significant difference regarding the mean age and duration of diabetes. Both groups consisted of 7 males and 8 females. The mean random blood glucose, serum bicarbonate, pH and serum β-hydroxybutyrate on admission are shown in Table 1.

Table 1. Comparison between the two studied groups according to baseline characteristics. 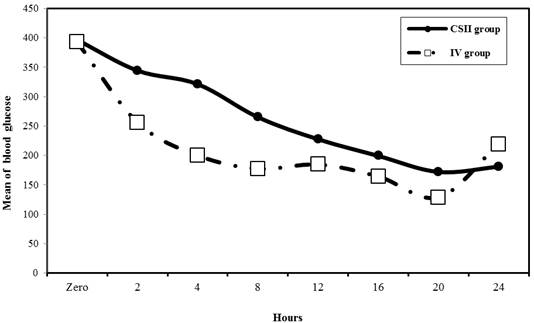 Figure 1. Comparison between the two groups according to the reduction of blood glucose level (mg /dl). 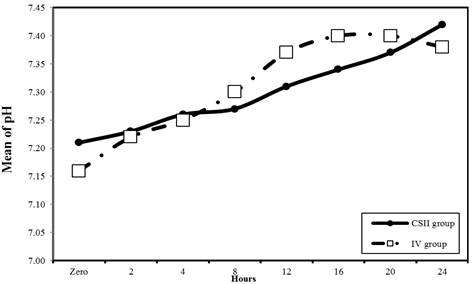 Figure 2. Comparison between the two groups according to the increase in blood pH. 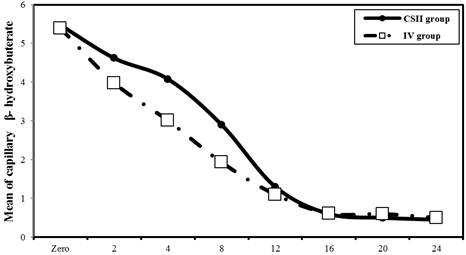 Figure 3. Comparison between the two studied groups according to the reduction of Capillary β-hydroxybutyrate (mmol/L).

DKA is the most serious hyperglycemic emergency and the leading cause of death in children and adolescents with T1DM. [2] Previous randomized controlled studies in patients with DKA have studied the amount and method of insulin administration required for resolution of ketoacidosis. [4, 5, 6] However, none of them used the CSII for managing these cases. To our knowledge, this is the first prospective randomized trial to compare the use of continuous subcutaneous insulin infusion of insulin glulisine to intravenous glulisine insulin infusion for management of mild and moderate cases of DKA.

In the past years, Because of fears of insulin resistance, large doses of insulin were thought to be necessary to suppress hepatic ketone body production. [24] However, numerous prospective randomized studies were directed to prove the sufficiency of low-dose regular insulin by intravenous infusion for successful recovery of patients with DKA. [25, 26]

Low-dose insulin infusion protocols can decrease plasma glucose concentration at a rate of 50–75 mg/dl/h. [27] That is why, most medical centers recommend the administration of IV infusion because of the delayed onset of action of SC regular insulin and its prolonged half life. [28] In their prospective randomized study in patients with DKA treated either with IM and SC injections or with continuous IV infusion of regular insulin, Fisher et al. [9] showed that around one third of the patients in the IM and SC groups did not lower their plasma glucose by 10% in the first hour after insulin injection and that the concentration of ketone bodies was lowered at a significantly faster rate in the IV group.

In our study, there was a significant difference in the decrease of blood glucose level between the two groups during the first 8 hours of treatment with more rapid decrease in the IV treated patients, then no significant difference during the rest of treatment hours. The delay in onset of action of SC insulin is substantiated by the report of Menzel and Jutzi, [10] who treated patients with hourly SC injections, but only 4 of 24 patients showed a fall in blood glucose concentration in the first 3 hours of therapy. These differences in response can be explained by delays in reaching a maximal circulating insulin concentration. Maximal insulin peak is achieved within the first hour in patients treated with IV regular insulin, but not until the second or third hour of therapy in those treated with IM or SC injections.

Reports have showed that treatment of patients with mild and moderate DKA with hourly injections of SC lispro insulin is as effective as treatment with low-dose IV regular insulin. [12] However, this protocol may be difficult to follow in many medical centers because of the intensity of treatment and shortage of nursing staff on general wards.

The mean duration of treatment until resolution of DKA was not statistically different between the CSII group (16.58 ± 3.68 hours) and IV group (14.60 ± 30.2 hours), p=0.136. Similarly, the total days of hospitalization were not different between the two groups. However, the mean amount of insulin needed for treatment until resolution of DKA was higher in the CSII group (61.50 ± 13.89 units) compared to (46.60 ± 13.53 units) in IV group, (p=0.009). There was insignificant difference in the number of hypoglycemic events during therapy (3 patients in CSII group and 2 patients in IV group) between the two groups.

Karoli et al. [29] conducted a prospective randomized study that compared the efficacy and safety of subcutaneous insulin analogue every hour with that of standard low dose intravenous infusion of regular insulin in adult patients with DKA. They observed blood glucose decrease rates and control of ketoacidosis between the two groups and concluded that patients with uncomplicated DKA can be managed safely with rapid acting insulin analogue in general medical wards. The rate of decline of blood glucose, time taken for resolution of ketoacidosis, amount of insulin required for improvement of hyperglycemia, and resolution of DKA were similar between the two treatment groups. The duration of hospital stay also was not different between the groups. There was no need to increase or change the dose or route of insulin administration because of delayed or inadequate response in any of the treatment groups. There was no mortality and none of these patients had recurrence of ketoacidosis during their hospital stay.

A Very recent retrospective cohort study, including 76 DKA episodes in children with T1DM, demonstrated that administration of SC regular insulin every 4 hours was a safe and effective alternative for the treatment of DKA with pH > 7.0. Again, this reinforces the feasibility of using other routes of insulin delivery in management of DKA. [30]

We acknowledge some limitations of our study, including a relatively small number of patients and the fact that patients with coma, hypovolemic shock, acute myocardial ischemia, congestive heart failure, end-stage renal or hepatic failure, and pregnancy were excluded. A large prospective randomized clinical trial of the use of CSII in management of DKA is certainly needed to address these important issues.

Our results indicate that, until larger studies are done, the use of continuous subcutaneous glulisine insulin infusion represents an effective and safe alternative to the use of intravenous glulisine insulin in the management of patients with uncomplicated mild to moderate DKA. Its effectiveness was shown in terms of normalization of metabolic parameters, the duration of therapy till resolution of DKA and the overall hospital stay that were comparable to the use of intravenous route. There was no increase in hypoglycemic events or mortality with this regimen. However, larger amount of insulin was needed to achieve resolution. We recommend conduction of larger randomized controlled trials on the use of CSII in management of DKA using regular insulin and different rapid acting insulin analogues.