Abstract: The proposed work analyses there are many techniques already available for the soft handover region. Here the paper comes up with the new hook replacement technology for mobile receiver in the soft handover region. In our proposal, the receiver receive the signal from all available base station (BS) around the mobile and hooks to the base station which provides proper and strongest path while it comes to the fall of signal to noise ratio below pre-decided threshold level. Receiver compare the weakest hook of path concern with base station and remove it from the currently considerable hooks and with the sum of the strong and proper responsive hooks it creates proper and better group. Then after analysing all the hooks from the group it starts communicating with strongest hook. This paper describes this process in this paper by showing error performance, average no of considerable paths offered by this newly hook replacement scheme which is depend on Mobile Controlled Hand (MCHO). Which is applicable to GSM as well as CDMA (IS-95 and CDMA2000).

The Mobility in communication occurs because of the synchronisation of the transmitter and receivers. Mobiles are communicating with the B.S. than B.S to MSC and MSC to data centres and Data centres to PSTN and so on the process continues. The BS are the main centre for the one cell (cell is particular geographical area). In each cell contains their particular frequencies by which they are communicating with the mobile drives. Now mobile devices are always in motion. They are like non-steady thing and sometimes these mobiles are like changing the cells to one cell to another. The cell in this kind of situation the mobile device has to change the communicating frequency from the old cell to new cell and that’s the particular process called "Hand Over". There are mostly two types of hand over process 1st: Hard handover: The process in which mobile device brake the old frequency connection before it makes the connection with new frequency from the new cell where it is going towards. This type of handover is known as "brake-before-make". 2nd: soft handover in which the users not get affected by the frequencies change process and can continue uses service. Mobile station makes the connection with the new base station before it breaks the connection with the old cell. This process is known as "make-before-brake". This paper deals with the soft handover process done by the smooth "Hook Replacement Technique". For the increment of signal to noise ratio and to lower the deep fades, combination of reasonable path is done by receiver. In the hand over region, availability of all resolvable paths can be quite more as off they come from the adjacent BS and the target BS. Main benefits that are trying to archive are low complexity and low processing power for the instrument while it move from one cell to another cell and look up for the new strongest frequency to get connected and to communicate. Many of researches have been conducted to the study of hook replacement issue and those from the target B.S has seldom been consider before. [1].

This paper proposes an alternative Hook Replacement scheme to reduce the SHO overhead and at the cost of certain degradation in performance. With this scheme when the output of SNR goes lower than the targeted SNR, the receiver starts the scanning for the additional La paths from the target BS, than receiver does the comparison of the sum of the SNRs of the Ls; which is nothing but the grater than equal the Lc, the strongest paths from the target BS to the sum of Ls SNRs which is weakest from the Lc paths. Then again it got connected with the best and strongest group to form Lc paths. In this scheme it just compare those blocks which containing only equal size of Ls and avoids rearranging all the paths which are essential for the full GSC scheme, so reduction in SNR comparison to SHO overhead can be obtained. More specifically our derivation tackle the joint probability density function (PDF) for two adjacent partial sums of order statistics of the receiver output SNR. [2].

Many researchers have been dedicated their study for this soft handover process and they out with also a new techniques which can distinguish the resolvable paths from the serving BS and some are from the Target BS. [3].

In their research they did work on the Rack Receiver regarding the with the finger replacement technique which offers comprehensive framework and with very slight performance loss compared to the previously proposed scheme.

In their research they proposed Soft Handover algorithms for the UMTS which covers IS-95 and CDMA2000 respectively.

This paper proposes an alternative to of Hook Replacement by combining scheme that is also applicable to SHO region and reduces SHO overhead by making Soft Handover process under MCHO (Mobile Controlled Handover). 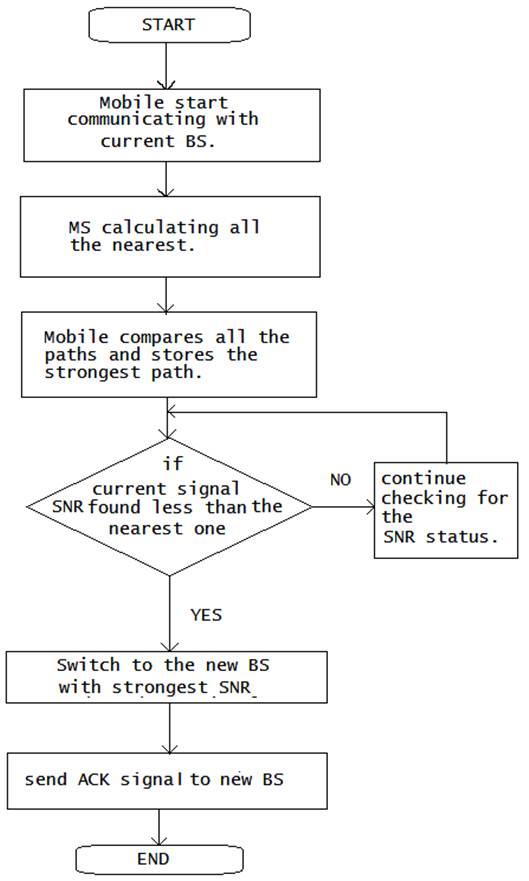 Figure 1 explains the process flow of concept, and focusing on the MCHO technique. In addition, the proposed work concentrates on the mobile receiver unit. The MS unit is moving from the host cell area to target cell area. The time at MS enters in the SHO area mobile starts collecting the information of nearest cell, its frequency, and stats comparing the SNR of host BS to new BS. In the beginning of every time slot MS compares the received SNR to certain target SNR.MS starts with the Lc/L-GSC, now considering Гx:y be the sum of the x largest SNRs among y paths. So, [5].

is zth order of calculation of then the total received SNR after GSC is given by ГLc: L. In the of starting of every time slot MS compares the received SNR with the minimum level of SNR which can be considered as target SNR and denoted by γt. If ГLc: L goes below γt a two way SHO occurs. [6]. 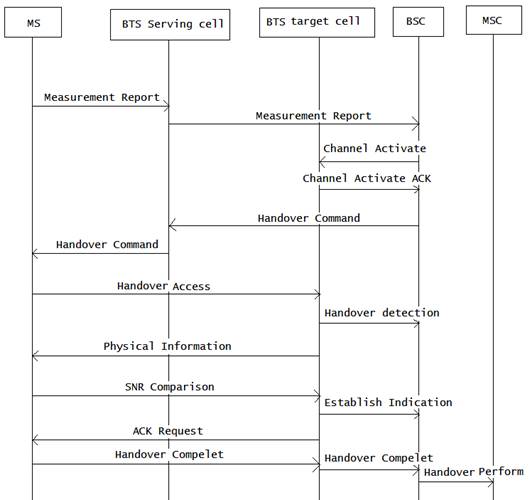 In this scenario Figure 2 explain MS receiver compares two smallest past from currently serving BS and sum of the strongest path from BS, then receiver transfer the smallest path which is currently used with the best path. There is no transfer take place if the final sum of all the path is less than the sum of the weakest paths from the serving BS. [7].

Now, from the above concept the final combined SNT,

In this section of statistics combined SNR of the proposed method.

Now from the equation (a) the cumulative distribution function (CDF) of

≤ J+ K < i] can easily calculated from the cumulative distribution function of Lc/L-GSC where H is independent of J and K so the proposed algorithm can obtain the probabilities of (b) as, [5, 12]

Now focusing on finding the joint probability define function of J and K,

. Now the calculation for the L resolvable paths as

. Applying the Bayesian rule, define the joint PDF as,

Obtaining all PDF in (8)

By writing close-form expression for the joint PDF,

, so trying to obtain joint PDF of J and K,

from (g) by taking integral at

Here (h) includes only finite integrations of elementary functions and such joint probability can be calculated by software like mathematica. Even (h) is valid only for

and for the other cases can be calculated by considering (h) together with (c) –(f), the cumulative distributive function of γt,

in (b), and can be obtained by using Leibnitz’s rule and differentiating (b) with respect to I, can obtain generic expression for PDF of the combine SNR, γt.

In the previous section discussions, the path with strongest signal to noise ratio values are selected by the mobile whenever it necessary, the mobile controlled handover scheme always provides better performance than the block change scheme. This section discusses the complexity tradeoff by analysing average number of path calculation, average number of signal to noise ratio comparison and the soft handover overhead. [9-11,15-22].

In the scenario of

. So the average number of path calculation of the Block change is same as that of hook replacement with full generalized selection combining (GSC). [9-11, 15-22].

Here while comparing the average number of required SNR and GSC, GSC can be denoted as

Now we can express this comparison for the full GSC scheme.

In cellular systems, handover is a key factor that affects customer satisfaction. This paper proposed a new hook replacement technique; and provided general comprehensive work of proposed scheme and its mathematical assessment. Because of the high performance and continuous tracking by the MS; Ms required more power source to continue. In conclusion this technique gives a more efficient handover but it reduces the battery life of mobile instrument.