Abstract: This paper studies the effect of the combined natural convection and radiation on the heat transfer and this, in an inclined solar thermal collector. A 3D numerical code is developed to solve respectively the convection equations according to the vorticity-vector potential formulation and the radiation equation. The discretize schema is the control volume method for the convection and the FTnFVM for the radiative equation. Numerical solutions are obtained for Pr=0.71, Ra=105, and the radiation-conduction parameter (rc) ranging from 0 to ∞. The medium is considered as gray. Indeed, it emits and absorbs heat.

Coupling of natural convection and radiation is prevalent in many industrial applications and natural phenomena. We quote for example: solar collectors, fire research, and building construction and insulation systems.

Many researchers have had a great interest to study pure natural convection in an inclined cavity. Mention may be made of the work of Ozoe, Sayama and Churchill [11] from one side and Ozoe, Yamamoto and Churchill [12] from the other side who reported that if the cavity is seriously inclined (ϕ between 80° and 90°), complex flow pattern with 3D multiple roll-cells would appear in the cavity. Wang Q.W, Wang, G., Zeng and Ozoe [14] studied the natural convection in 2D cavity with an inclined angle varying between 0° and 80°.

It is worth noting that the first numerical study in literature about the coupled heat transfer problem involving both convection and radiation in a rectangular cavity seems to be that of Larson and Viskanta [9]. They found that radiation heats up the cavity surface and the gas body very quickly and thus considerably modifies the flow pattern and the corresponding convection process. Several two-dimensional studies are found for the problem of combined radiation and natural convection in rectangular participating medium (Chang, Yang and Lloyd [5]; Yang [16], Yucel, Acharya and Williams [1]) but many works take only into account the effects of surface-to-surface radiation in order to reduce computational effort (Balaji and Venkateshan [4] and Velusamy, Sundararajan, Seetharamu [13]), Chang , Yang and Lloyd [5] investigated combined radiation and natural convection in two-dimensional enclosures with partitions. Desreyaud and Lauriat [7] computed natural convection and radiation in rectangular enclosures using a one-dimensional P-1 radiation analysis. Webb and Viskanta [15] measured the natural convection induced by irradiation and compared experimental results with the results of an analysis based on a spectral one-dimensional radiation model. A review paper on this subject was given by Yang [16]. A 3D numerical simulation of radiation and convection in a differentially heated cubic cavity using the discrete ordinates method is effectuated by Colomer, Costa, Cònsul and Oliva [6]. The authors detail the effect of the Planck number and the optical thickness on heat transfer and effectuate a comparison between dimensional results obtained from a two-dimensional model and those obtained in the mid-plane of a long rectangular enclosure. Later, Borjini, Mbow and Daguenet [2] studied numerically the effect of the radiative heat transfer on the three-dimensional convection in a cubic differentially heated cavity for different optical parameters of the medium, Pr = 13.6 and Ra=105. Their results show that the structure of the main flow is considerably altered by of the conduction–radiation parameter. Indeed, they found that the inner spiraling flows were very sensible in location and direction to the radiative heat transfer. However, the peripheral spiralling motion was qualitatively insensitive to these parameters. It is also found that radiation favorites the merging of the vortices near the front and back walls. Recently, Kolsi, Abidi, Maatki, Borjini, and Ben Aissia [10] studied the effect of radiative transfer and the aspect ratio on the 3D natural convection. Prandtl and Rayleigh numbers are respectively fixed at 13.6 and 105. They found that the principal flow structure is considerably modified when the radiation-conduction parameter was varied. However, the peripheral spiraling motion is qualitatively insensitive to these parameters. In all these works, radiation is found to play an important and sometimes major role in heat transfer and fluid flow processes.

In the present paper, we further study the combined radiation and natural convection in an inclined 3D cavity filled with emitting, absorbing, and isotropically scattering fluid. The work will be divided into two main parts, namely: effect of Rayleigh number on heat transfer and cavity inclination effect on the flow and heat transfer.

Figure1, presents the considered physical system which is composed of a square basic parallelepipedic enclosure, with aspect ratio F=H/W equal to 2. The two vertical walls are kept respectively at constant cold temperature and hot temperature. All the other walls are kept adiabatic. In the present study, the cavity is inclined around with an angle γ. All these surfaces are gray and diffuse. Even more, the cavity is filled with a gray, emitting–absorbing and isotropically scattering fluid. The flow is supposed to be laminar and the Boussinesq approximation is used. The dimension equations describing the combined radiation and natural convection are respectively: 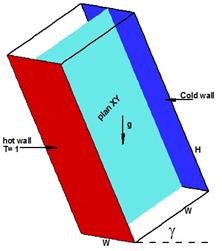 As numerical method we had used the vorticity-vector potential formalism

. This allows, in a 3D configuration, the elimination of the pressure, which is a delicate term to treat. For this, one applies the rotational to the equation of momentum (Eq.2). The vector potential and the vorticity are, respectively, defined by the two following relations:

The foregoing dimensionless parameters are given as follow: time

, are put respectively in their dimensionless forms by

. The adimensional temperature is defined by:

is the mean temperature of the hot wall.

The system of equations controlling the phenomenon becomes:

The initial and boundary conditions are as follows:

The radiative transfer equation, for a gray semi-transparent medium which absorbs, emits and isotropically diffuses the radiation, can be viewed in the manuscript of Borjini, Mbow and Daguenet [2] et Kolsi, Abidi, Maatki, Borjini, and Ben Aissia [10].

The comparison of radiative and conductive fluxes on the heated wall, with the results of Colomer, Costa, Cònsul and Oliva [6] is presented, for several optical thicknesses, in Table 1. A remarkable difference is observed between the two results. This is a consequence that Colomer, Costa, Cònsul and Oliva [6] used the discrete ordinates method with suitable directions and for the classical 3D furnace case they compared their results only with the approximation P3 of the spherical harmonics.

To extract simulations for the present study, the parameters of simulations are respectively: a times step equal to10-4, a space grid of 41x81x41 for F=2 and an angular grid FT6FVM.The Rayleigh number is fixed at 105 and the Prandtl number at 0.71. The optical with τ is equal to 1, Φt=0.1 and albedo equal to 1. The effects of the conduction-radiation parameter, the inclination angle of cavity and the oscillatory excitation on the principal flow and the heat transfer are discussed.

A.  Effect of the variation of the Ra number on heat transfer

This section is reserved to show the influence of the Ra number on the heat transfer. Figure 2 shows that the increase of the Ra number and consequently the effect of natural convection, do not alter the average radiative flux. For the rest of the results the Ra number is fixed at 105. 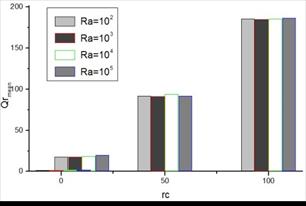 Fig. 2. Effect of the Ra number on the mean radiative flux.

B.  Cavity Inclination effect on the flow and heat transfer

As shown in Figure 1, the cavity is gradually inclined with a step equal to 30°around z-axis. Four angles presented here are respectively: γ=0°, γ=30°, γ=60° and γ=90°. In these cases, the effect of γ is carefully investigated with the variation of the conduction-radiation parameter rc which evolved from 0 to infinite.

Figure 3 represents the projection of flow lines in the main plan XY for γ=0°. When rc=0 (Figure 3(a)), the flow is characterized by one thermal vortex slightly titled towards the cold wall and turns counter the clockwise. The streamlines are not closed and they form a spiral. When rc=10 (Figure 3(b)), the vortex moves toward the hot wall and stabilizes in the center of the cavity. For rc->∞ (Figure 3 (c)), one center vortex is shown and streamlines are closed.

Figure 5 represents the projection of flow lines in the main plan XY for γ=60°. In absence of radiation (Figure 5 (a)), one notes the apparition of one cell with three inner vortexes. The top and the bottom vortex are slightly titled to the cold wall and turn counter clockwise. The central vortex turns in the clockwise. For rc=10 (Figure 5(b)) one notices the coalescence of the three vortex and one vortex, slightly titled to the hot wall, takes place and turns counter the clockwise. By the increasing of rc which tends to infinite (Figure 5(c)), one center vortex appears and turns in the clockwise. For γ=90° (Figure 6) the problem of Rayleig-Benard convection is retrieved. Figure 6 shows the projection of the flow lines on the mid XY plane for rc=1, rc=10 and rc->∞. When rc=1 (Figure 6(a)) and rc= 10 (Figure 6(b)), two contra-rotative cells take place and when rc->∞ the flow presents height roll-cells. This result is earlier demonstrated by Ozoe et al. [11].

The (Figure 7, Figure 8, Figure 9 and Figure 10) present the isothermal surfaces respectively for γ=0°, γ =30°, γ =60° and γ= 90°. In absence of radiative transfer (rc=0), and by increasing the inclination angle, one notes that the distribution of the isothermal surfaces is largely modified. In fact, isothermal surfaces are distorted and a 3D aspect appears in the core of the cavity. When the effect of the radiation increases rc=10, a vertical stratification appears in the core of the cavity and the thermal gradient decreases in the bottom near the hot wall and in the top near the cold wall. When rc goes to infinity the radiative heat transfer prevails and the isotherms are parallel to isothermal walls. Furthermore, one notes the 3D distribution of the temperature for low rc number. However for higher value of rc, the temperature field becomes independent of the flow and pure radiative transfer takes place. It should be noted that the inclination of the cavity has no effect on the temperature distribution when the conductive radiative parameter goes to infinity. In fact, the isothermal surfaces shown earlier in (Fig. (8(c), 9(c) and 10(c))), are identical and equidistant expected near active sides and they are symmetrical about the middle plane. 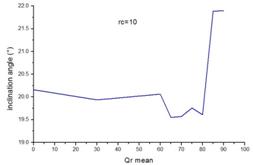 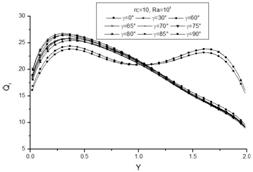 The distributions of conductive and radiative heat fluxes on the hot wall are represented (Figure 13 and Figure 14) for the different inclinations angles and for rc=10. It is remarkable that for γ=0°, radiation increases conductive heat transfer at the top of the hot wall and decreases it at the bottom. Due to the temperature levels, the radiative flux is higher on the hot wall while the conductive flux is more important on the cold wall. These characteristics are qualitatively similar to those obtained in 3D by Colomer et al. [6] and 2D Tan and Howell, (1991) computations.

The present numerical results are carried for Ra=105, Pr=0.71 and the optical with τ is equal to 1, Φt=0.1 and albedo equal to 1. Many conclusions are finding: in absence of radiation and by the increasing of the inclination angle of the cavity, we find that the formation of multi-roll cells is favorites.

The radiation promotes the formation of three vortex when γ=30 ° and rather tends to make the flow mono-cellular when γ = 60 °. For γ=90°, the flow is with two contra-rotative cells for low values of rc and it is with height roll-cells when rc tends to infinite.

A – Dimension amplitude of the sinusoidal excitation

H– height of the cavity

S– distance in the direction

– unit vector in the direction of the intensity