The even-even 154Gd isotope has subjected to an extensive study in the past few years where the region of N= 90 shows rapid changes of nuclear deformation parameters as a function of the particle number. Many authors have studied this isotope experimentally and theoretically.

3.   Studying the back bending;

5.   Detect any interactions between the +ve and –ve parity States and calculating the electric monopole strength X(E0/E2).

IBA-1 model was applied to the positive and negative parity states of 154Gd isotope. The Hamiltonian employed in the present calculation is:

The electric quadrupole transition operator employed in this study is given by:

Ii: the initial state of the electric quadrupole transition, and

If: the final state of the electric quadrupole transition.

The potential energy surfaces, V(β, γ), for 154 Gd nucleus as a function of the deformation parameters β and γ has been calculated using [27]equation: 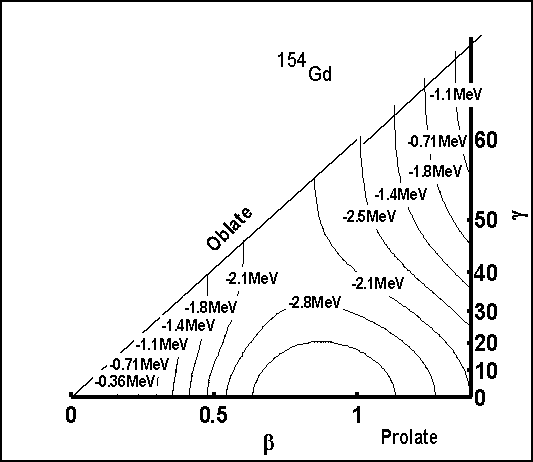 The energy of the positive and negative parity states of 154 Gd isotope are calculated using computer code PHINT [28] with the parameters EPS = 0.424, P AIR = 0.000, ELL = 0.0084, QQ = −0.0244, OCT = 0.000, HEX = 0.000 all in MeV while, E2SD =0.1450(eb), E2DD = −0.4289(eb). A comparison between the experimental spectra [29] and our calculations, using values of the model parameters given in Table 1 for the ground state, β1, β2, γ1, γ2 and (−ve) parity bands are illustrated in Figure 2. The agreement between the calculated levels energy and their correspondence experimental values are fairly good in low-lying states and slightly higher for the higher excited states. We believe this is due to the change of the projection of the angular momentum which is due mainly to band crossing. 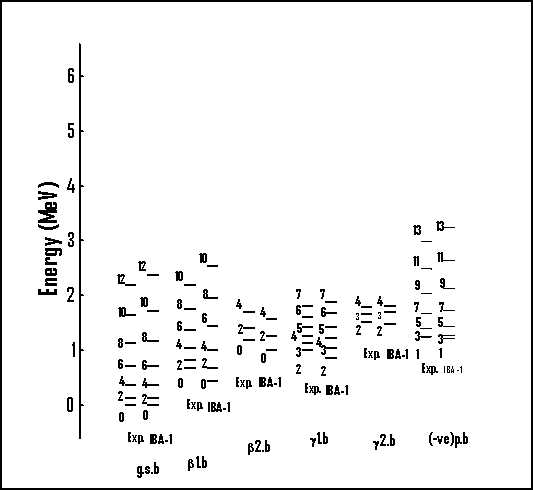 Unfortunately there is no enough measurements of electromagnetic transition rates B(E1) or B(E2) for 154 Gd nucleus. The only measured value is B(E2, 0+1 → 2+1) = 3.89(7) [30] which presented in Table 2. The parameters E2SD and E2DD are used in the computer code NPBEM [28] for calculating the electromagnetic transition rates and then normalized to the experimental value, B(E2, 0+1 → 2+1).

The moment of inertia J and energy parameters ω are calculated using Eq. (11, 12): 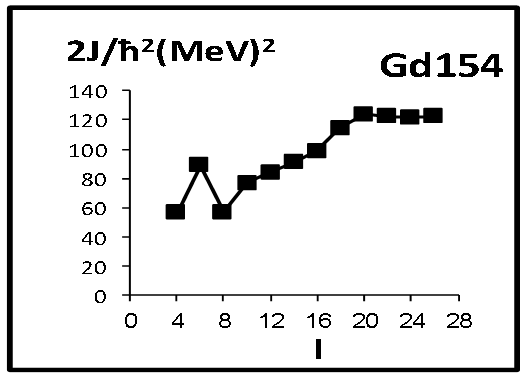 Figure 3. shows forward bending for154 Gd at I + = 6 and that bending has explained as due to partial rotational alignment of a pair of neutrons near the Fermi surface. 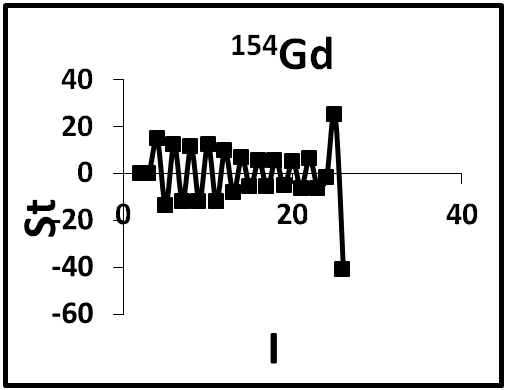 The presence of odd-even parity states has encouraged us to study staggering eﬀect for 154Gd. Staggering pattern between the energies of the ground state and the (−ve) parity octupole bands have been calculated, ∆I = 1, using staggering function Eq. (13, 14) with the help of the available experimental data [29].

The calculated staggering pattern has illustrated in Figure 4. It shows an interaction between the (−ve) and (+ve) parity states.

The small values of the Xif ′ f (E0/E2) indicate that the transition has small contribution of E0 transition, while the large valeue means that the decay of the state is mainly E0 which is by turn responsible for the shape of the nucleus.

A: mass number; depopulating it;

If: spin of the ﬁnal state of E0 transition;

I′ f: spin of the ﬁnal state of E2 transition;

between Ii and If states, and

Te (E2, Ii − I′ f): absolute transition probability of the E2 transition between Ii and I′ f states.

IBA-1 model has been applied successfully to 154Gd isotope and:

1. The levels energy are successfully reproduced;

4. Forward bending has observed at angular momentum I+ = 6;

5. Strength of the electric monopole transitions Xif ′ f (E0/E2) are calculated; and

6. Staggering eﬀect has been calculated and beat pattern has obtained which show an interaction between the (−ve) and (+ve) parity states.