Abstract: The energy and exergy efficiencies of a stationary solar cooker equipped with an asymmetric compound parabolic concentrator (CPC) were experimentally evaluated. Experiments were conducted with different water load and at different ambient temperature. It was found that it is preferable that the cooker is directed 30° east of south for an exploitation during morning at a lower ambient temperature with sufficient solar radiation on its intercept area. Also exergy efficiency together with energy efficiency is used to define the optimum water load of the solar cooker. This optimum load is calculated according to 5 kg water/m² intercept area.

Solar cookers have been in use for many years. In recent years, research was focused on the design improvements of solar cookers for more effectiveness, a user-frindliness and a better social acceptance. Many solar cookers were developped in different countries with different designs and in various sizes [1]. Differents authors have also defined and used several parameters to test the performance of solar cookers [8].

Effect of load varfiations on the performances of theses systems was also approached but for the first time in 2015 the concept of optimum load range (OLR) for solar cookers was introduced by Mahavar [8]. This concept is based on an energy analysis. Indeed, the optimum load range is a specific range of load for each solar cooker for which it shows good thermal as well as good cooking performance and has reasonably high efficiency. In the present paper and for the first time a contribution to the determination of the optimum water load of a solar cooker based on an experimental exergy analysis is presented.

2.1. Description of the Studied Solar Sooker

A schematic diagram of the studied solar cooker is presented in Fig. 1 [3]. It consists of a solar cooker that is equipped with a non-imaging line-axis asymmetric CPC and an insulated parallelepipedic box with a vertical transparent glass cover on a side and a horizontal transparent glass cover on the roof. The absorber-plate is bent in right angle in a form of a step. It is laid out, so that its vertical surface is parallel to the glass cover on side by forming a space allowing the circulation of hot air upward the cooker box cavity, which is delimited by the roof glass and the horizontal surface of the absorber-plate, on which are deposited the cooking pots. The absorber-plate has a negligible thermal capacitance (thin plate) and its exposed surface is painted black to increase solar radiation absorption. Two linear parabolic reflectors (upper and lower parabola) are fixed on the glazed walls of the box. 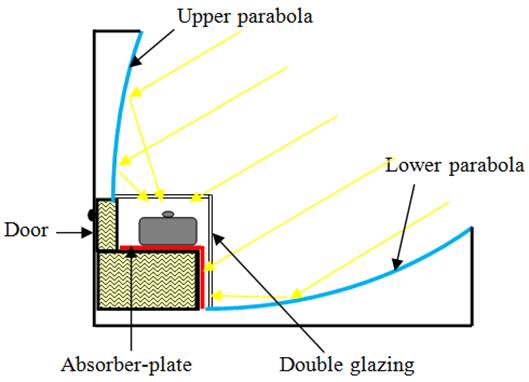 Fig. 1. Schematic sketch of the stationary box-type solar cooker employing a line-axis asymmetric CPC as booster-reflector and an absorber-plate in a form of a step. 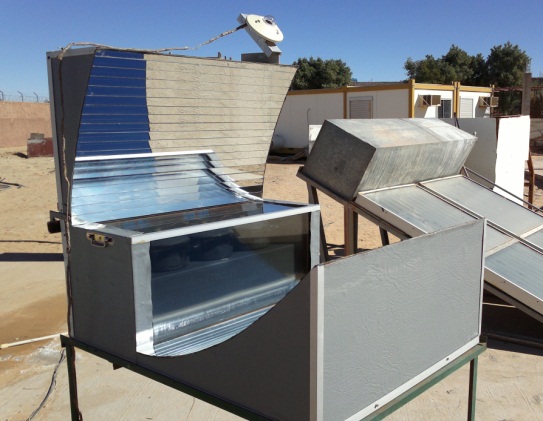 Experimental tests of the solar cooker were conducted in Adrar which is located in Algerian Sahara at 27° 53’N latitude and 0° 17’W longitude. The cooker was installed at a south oriented stationary position. During each test, three identical cooking pots were placed in the cooker and loaded with water. Ambient temperature, temperature of the water load of each cooking pot and solar radiation on the CPC aperture were measured and recorded at 1 min intervals by using a data logger system. Solar radiation was measured by a class 2 CM11 type pyranometer (range, 0-1400 W/m², accuracy, ±2 W/m²). All temperatures were measured by K type thermocouples (accuracy, ±1.5°C). The temperatures of water in the cooking pots were measured by K type thermocouples which were introduced through a small hole at the lid centre of each pot. The average of these temperatures was taken as the water load temperature.

As per the International Standard procedure [2], the full water load should be calculated according to 7 kg water per square meter of intercept area. The intercept area of the solar cooker is 0.712m². So the full water load is equal to 5 kg distributed evenly between three identical cooking pots. In this study; experiments were performed for different water loads: 1, 2, 3, 4 and 5 kg and at two different seasons: At winter period with a low test average ambient temperature and at summer period with high test average ambient temperature. The variations of solar radiation and ambient temperature as well as water temperature measured for all tests, under completely clear sky and in absence of wind, are presented in Fig. 3 and Fig. 4. To avoid measurement anomalies as water near boiling, the recorded data were stopped at 96°C in all tests. Tests carried out at high ambient average temperature are presented in Fig. 3. Dates of different loads 1, 2, 3, 4 and 5 kg are 28 Aug. 2012, 29 Aug. 2012, 30 Aug. 2012, 19 Sep. 2012 and 13 Sep. 2012, respectively. During all these tests, the ambient temperature varied between 36.7°C and 42.8°C. 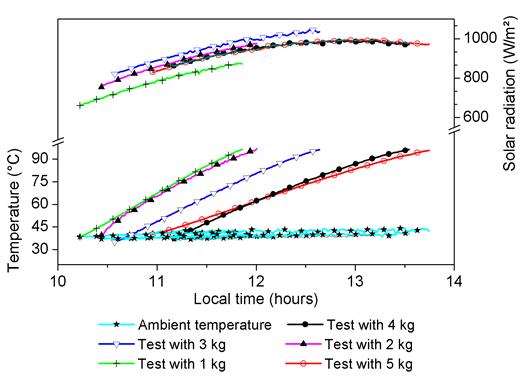 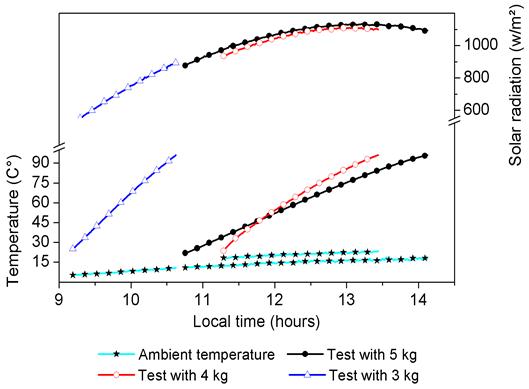 The evailable solar cookers testing and assessment procedures [2, 5, 9] are based on energy analysis that refer to the first thermodynamique law. Indeed these methods deliver informations regarding the energy quantity without pay intention to quality and energy availability. The exergy analysis is based on the second thermodynamique law; it take into account irreversibility and the quality of the availabe energy [12]. Exergy is defined as the mawimum work that may be supplied by a system at a given ambient temperature. The exergy analysis is a useful method to complement, not to replace, energy analysis. Together they help define the optimum system which satisfies the imposed thermal and economic constraints and minimizes exergy loss [4]. The introduction of the solar cooker exergy efficiency constitutes an other way to evaluate and compare solar cookers performances. For the first time, the exergy efficiency has been introduced for a cylindro-parabolic solar cooker by [10, 11] and later on, other researchers follow up this method to analysis other types of solar cookers [6, 7, 12, 13, 15]. In order to experimentaly evaluate instantaneous energy and exergy efficiencies; water heating tests should be conducted according to international standard recommended by Funk [2]. For each test, the instantaneous experimental energy and exergy efficiencies are calculated. When water is heated until boiling, then for each 600 seconds time interval

, the instantaneous energy and exergy efficiencies of the cooker are calculated by [6]:

is the solar radiation on intercept area of the cooker,

is the intercept area of the cooker,

is the time interval and,

are, respectively, the initial and the final water temperature and the ambient temperature for the considered time interval.

Considering all the time intervals during each test, the average energy efficiency

and the average exergy efficiency 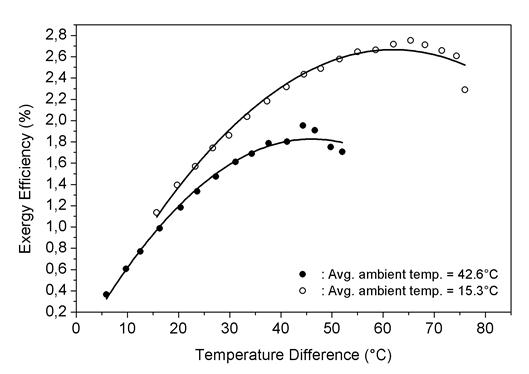 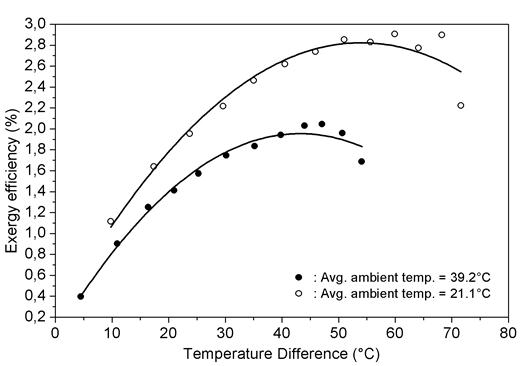 It can be observed from figures 5 and 6 that the various curves have the same trend, but the exergy efficiency is larger at low ambient temperature. For the same water load, the peak exergy efficiency is atteind at high temperature difference when the test is carried out at low ambient temperature. It signifies that one needs more input energy to raise water temperature with solar cooker at hot environnement conditions. Then it is preferable that the cooker is directed 30° east of south (two hours before noon at a stationary position) for an exploitation during morning with sufficient solar radiation on its intercept area and at a lower ambient temperature compared to afternoon provided that the cooker is well insulated.

4.2. Impact of Load Variation on Exergy and Energy Efficiencies

) was almost equal with a maximum difference of ±100W/m². 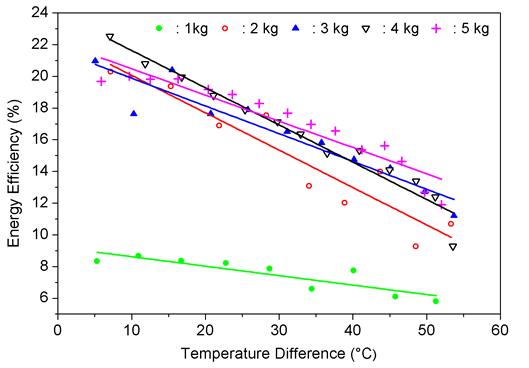 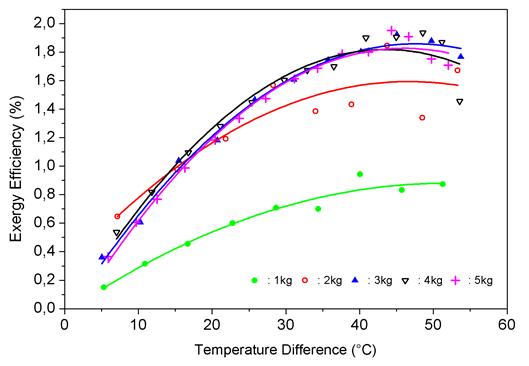 4.3. Determination of the Optimum Water Load 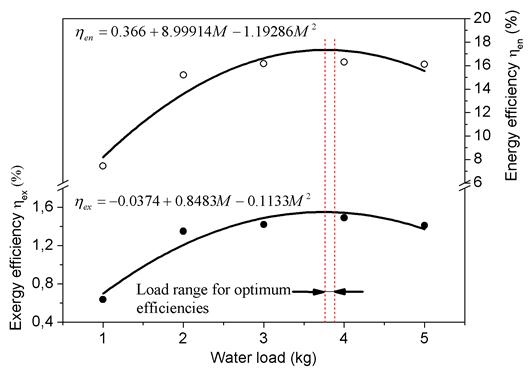 For each water load the characterisitic boiling time, as proposed by [5], is calculated by mean of the following relation:

is the required time (minutes) to achieve at boiling temperature and

is the test average solar radiation on intercep area of the cooker.

The results are presented in table 3. It can be observed, in agreement with what was previously shown, that the best charcteristic boiling time is obtained with a load close to 4kg.